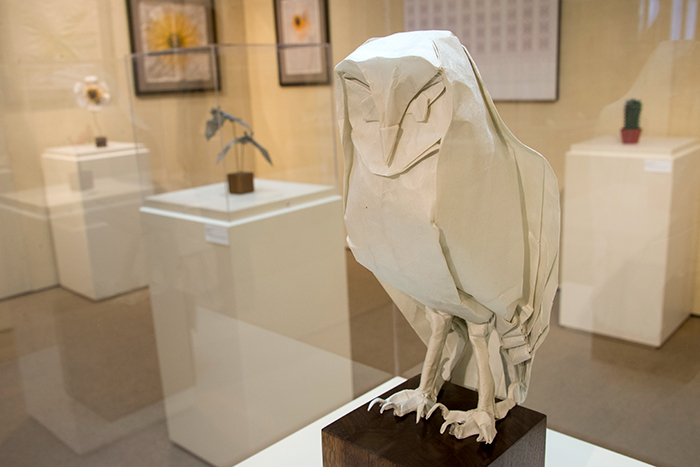 Barn Owl, Opus 538 is one of 25 works by physicist and origami master Robert J. Lang. Photo by Kate Lain.

What happens when you take a single sheet of paper and apply the ancient principles of origami coupled with computer-generated folding patterns? In the hands of physicist and origami master Robert J. Lang, the result is a masterpiece of paper artistry.

Don’t miss examples of this talent in “FlORIlegium: Folded Transformations from the Natural World by Robert J. Lang,” an exhibition of 25 such wonders inspired by the flora and fauna of The Huntington. The exhibition is open on weekends only, through Jan. 29, 2017, in the Brody Botanical Center.

The astonishing nature of Lang’s art is evident even before you enter the exhibition gallery. Walk through the doors of the Botanical Center’s entry hall and look up. You’ll see five paper herons streaking across the ceiling. There’s also a stunning group of black crows in flight on the wall facing the stairwell. 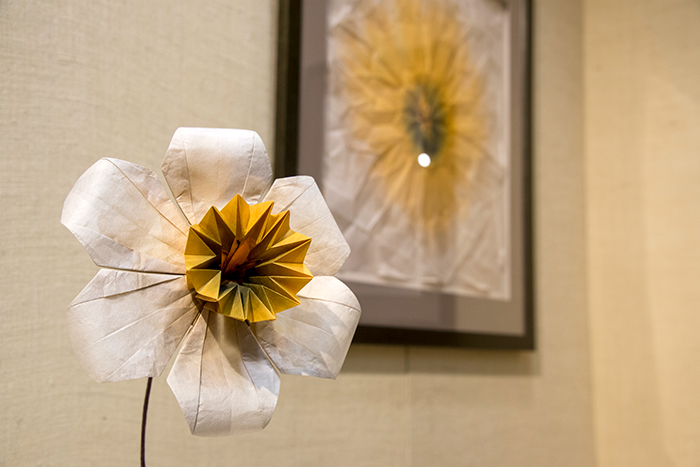 Inside are more delights. An orchid, a barn owl, a cactus, a rattlesnake, and a rose all induce jaw-dropping double takes. It’s hard to believe they were achieved by folding a single square of paper—with no cutting or glue.

“My goal is to bring about a conflict in the viewer’s mind,” says Lang, “where the beliefs of impossibility and the knowledge of achievement are simultaneously present in equal measure.”

An engineer and distinguished alumnus of Caltech, Lang is one of the pioneers of the cross-disciplinary marriage of origami with mathematics. The principles of origami—folding a flat surface into a smaller area—can also help solve real-world problems. Lang has used origami folding techniques to devise ingenious scientific solutions ranging from tiny collapsible heart stents to expandable space telescopes. 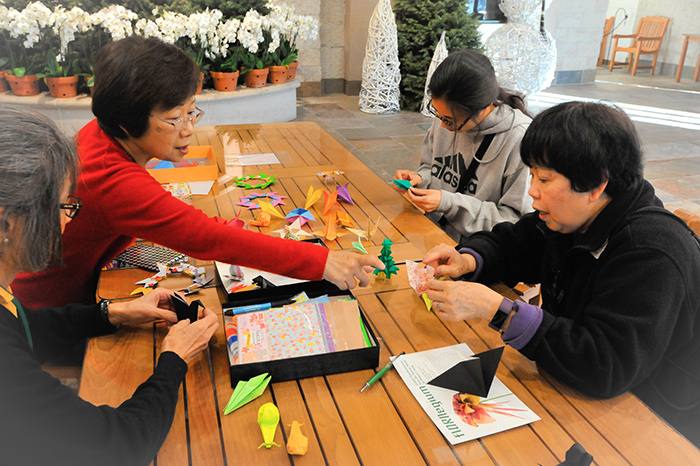 Visitors to the exhibition will find a table outside the gallery for impromptu origami folding. Photo by Andrew Mitchell.

Just inside the gallery, find a case filled with crawly creatures—a tarantula, a scorpion, a praying mantis. They highlight the uncanny skill required for going from big to small. It’s hard to imagine how Lang achieved such anatomical detail without cutting the paper—though he did use a pair of tweezers to make the minute folds.

Look at the back of the gallery where you’ll find a cactus (Cactus, Opus 680) modeled on one from the Desert Garden. It, too, was fashioned from a single sheet of paper, a different color on each side. A diagram of Lang’s method hangs near it. Both are mesmerizing. A few feet away is the barn owl, one that Lang says posed perhaps his greatest challenge. Going from concept to realization occupied seven years.

“FlORIlegium” demonstrates the wonders of nature through intricate folding patterns that create line and form. The exhibition’s title is Latin for “a gathering of flowers” and refers to illustrated books of botanical art from the 17th and 18th centuries, the horticultural Age of Discovery. It’s also a play on words because part of the word, “ori,” means to fold in Japanese. 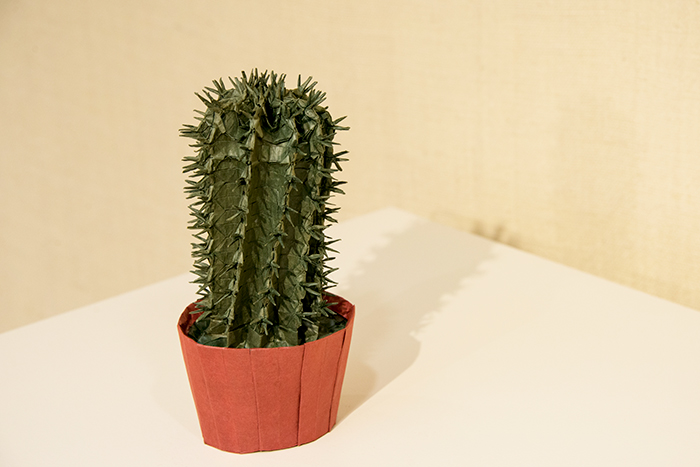 Cactus, Opus 680 was made from a single sheet of paper. Photo by Kate Lain.

“FlORIlegium: Folded Transformations from the Natural World by Robert J. Lang” is on view in the Brody Botanical Center Saturdays and Sundays only through Jan. 29, 2017.

Robert Lang will give a gallery talk about the exhibition on Jan. 28, 2017 at 2 p.m. in the Botanical Center. Free; no reservations required. A book signing will follow the program.

The exhibition and talk are part of a yearlong exploration of origami made possible through the support of Toshie and Frank Mosher.

Linda Chiavaroli is a volunteer in the office of communications and marketing.