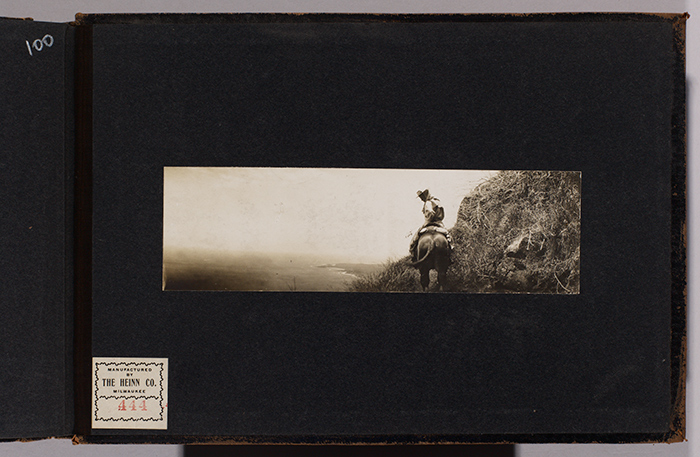 At daybreak on a steamy morning last August, my husband dropped me off at the Kalaupapa trailhead on the north shore of Molokai and waved goodbye.

A year earlier, I had convinced my husband and two children that this tiny, rural, and impossibly beautiful Hawaiian island was the vacation destination of their dreams. But as I stood at the edge of the pali (cliff) that plunged 2,000 feet into the sea and contemplated the cluster of warning signs—Falling rocks! No public medical facilities! No one under 16 years of age allowed! Proceed at your own risk!—I felt a twinge of fear.

The adventure writer Jack London and his wife, Charmian, had lured me to this spot. In 1907, the irrepressible duo set off from Oakland, California, on a widely publicized round-the-world trip. Sailing a custom-built, 45-foot-long sloop named the Snark, the Londons headed for Hawaii as their first port of call. Never mind that they and their ragtag crew knew nothing about navigation. London, a voracious reader since his youth, consulted “how to” books en route. After 27 days at sea, the Snark drifted into Honolulu harbor. The press had already given them up for dead.

As I hiked alone down the rugged trail, I encountered makeshift shrines along the way. Tucked into rocks, nearly hidden by ferns, were offerings of shells, plastic Madonnas, horseshoes, folded-up prayers. Markers for the two dozen switchbacks ticked by, one by one. Several deer warily eyed my progress, and a feral pig crashed across my path. At last I stood on a deserted beach looking across a dazzling bay toward a peninsula of land. Here it was: the place Jack London called “the pit of hell, the most cursed place on earth.” 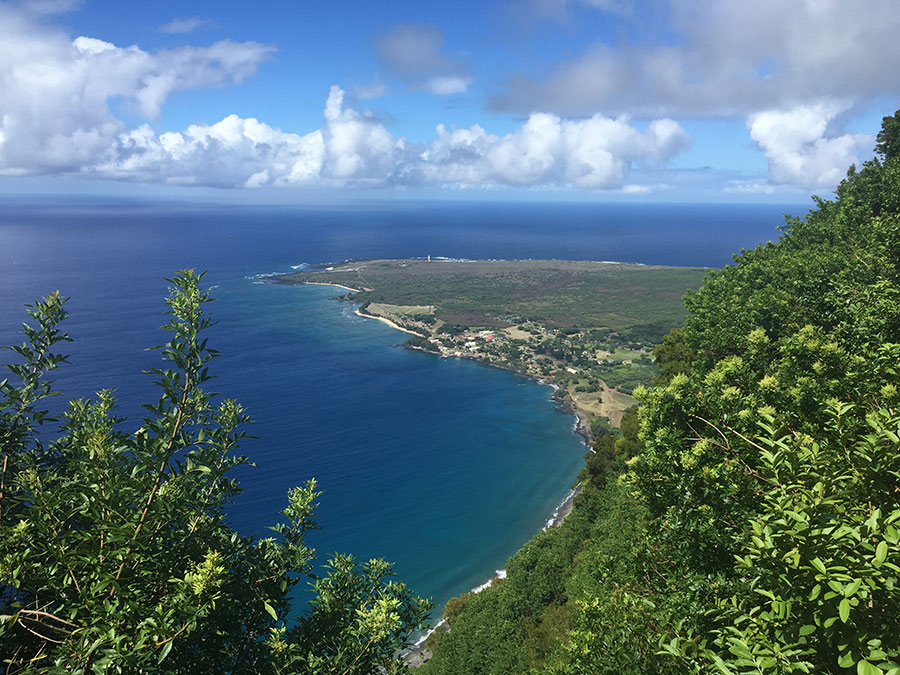 Looking down on the Kalaupapa peninsula from Molokai pali, August 2016. Photo by Jenny Watts.

Its breathtaking beauty notwithstanding, Kalaupapa’s dastardly reputation was justly earned. King Kamehameha V enacted a law in 1865 that criminalized sufferers of “leprosy” or what is now known as Hansen’s disease. The government arrested the ill, shipped them off to the isolated colony of Kalaupapa, regardless of their age, and then threw away the key. Over the next 100 years, at least 8,000 people died in enforced isolation. Residents were not free to leave until 1969.

Jack London received an invitation to visit the colony while hobnobbing with Honolulu’s elite. By 1907, the Board of Health (the entity that governed Kalaupapa) had made significant medical and humanitarian strides. Even so, sensationalist accounts abounded, and Pacific Rim boosters worried about the negative impact of these stories on Hawaii’s budding tourist trade. Who better, they reasoned, to help dispel the myths than renowned author Jack London?

Jack and Charmian were aware of Kalaupapa’s notoriety, and they leapt at the chance to take a tour. The sightseeing also fit into London’s scheme of writing articles to finance the trip. An accomplished amateur photographer, London knew that any pictures he supplied substantially increased his fee. (His standard rate of 15 cents a word and five dollars per published photograph was a pretty sweet deal.) To that end, London packed seven cameras: four portable folding models, two Kodak panoramas, and a stereoscopic camera with a state-of-the art lens. 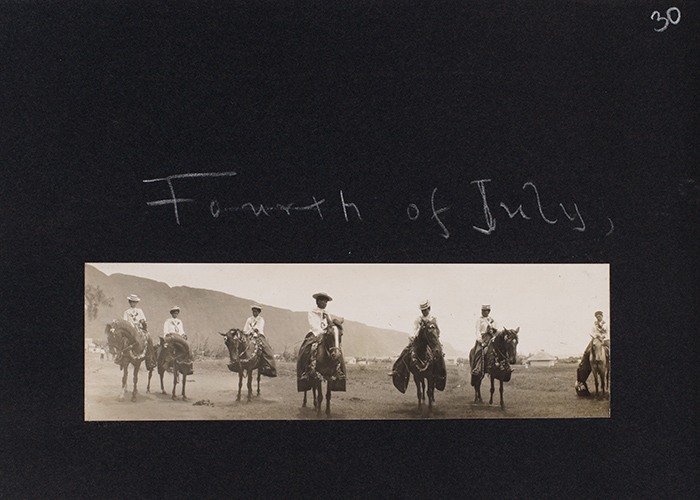 I had only an iPhone in my pocket as I waited for the bus that would take me on a historical tour of the area. A few National Park Service vehicles drove past. (Kalaupapa became a National Historical Park in 1980.) From what I could see, the place was as eerily quaint and idyllic as it had appeared a century earlier when Jack and Charmian rode in on horseback.

The pair stayed five days, and their hosts pulled out all the stops. They attended Fourth of July festivities at the racetrack, where the “Horribles” (as the residents jokingly called themselves) gathered to compete and bet. London marveled at the handsome P’au riders parading in traditional dress. He reveled in the games and flamboyant costumes and took a series of panoramic photos to record the events. “The chief horror of leprosy,” London reported in a glowing account that ran in Women’s Home Companion in 1908, “obtains in the minds of those who have never seen a leper and who do not know anything about the disease.” Kalaupapa’s residents were, he concluded, a “happy lot.” 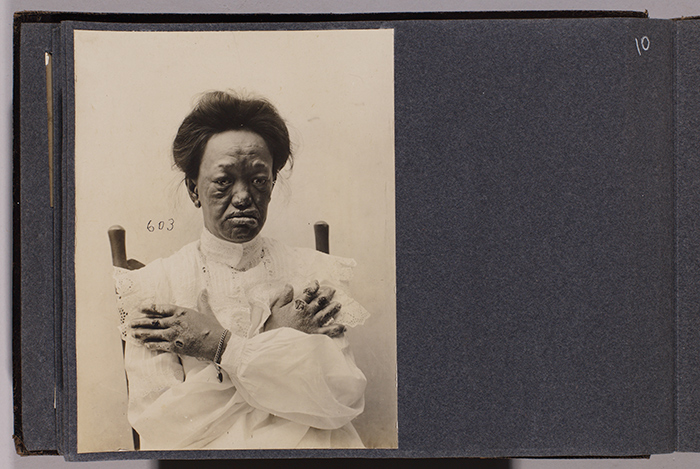 Several of the pictures pasted into three albums stamped “Molokai” in The Huntington’s Jack London archive belie the writer’s upbeat article. There are many photos of Fourth of July revelers, as well as shots of the remarkable setting and people posed in front of well-kept buildings with tidy lawns. But none of the afflicted came to the settlement by choice, and some of the government-issue portraits included in the archive tell a darker tale. In these, the sitters’ expressions are frozen in a paralyzed grimace, and their eyes look inconsolably sad.

I reflected on these pictures—of children, in particular—as six fellow tourists and I meandered down the nearly deserted roads in an air-conditioned van. We visited a bookstore and a “bar,” each run by one of the 15 remaining residents, who seemed to resent the intrusion. Jack and Charmian enjoyed a warmer welcome on their carefully orchestrated tour. They were taken into the medical and communal facilities shared by the then 800 residents, treated to concerts, and shown the ancient archeological sites. They visited the grave of Father Damian, the sainted Belgian priest. We did, too. Father Damian made Molokai his life’s work before succumbing to Hansen’s disease at the age of 49. 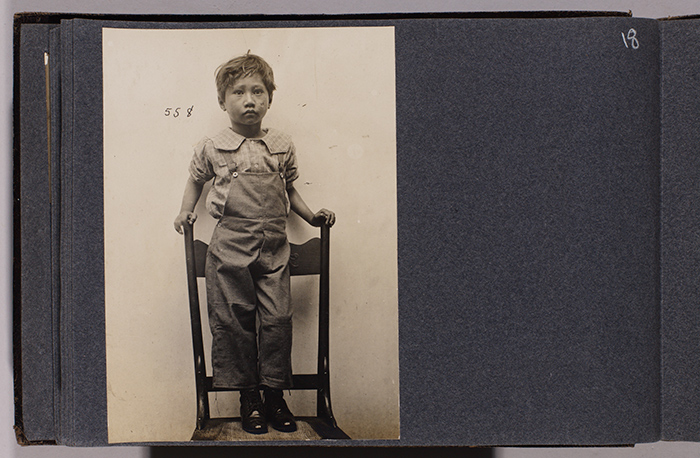 Next to Father Damian’s flower-bedecked grave was that of Brother Joseph Dutton, a man the Londons mentioned in passing. Dutton served with the 13th Wisconsin Infantry during the U.S. Civil War. He spent two subsequent years digging up and reinterring Union soldiers’ remains. A disastrous marriage and heavy drinking followed before he took Catholic orders and showed up, unannounced, in 1886 on Kalaupapa’s shores. He spent the rest of his life, 44 years all told, seeking penance for his past, caring primarily for the colony’s male orphans.

The tour guide dropped me off where I had begun my journey six hours earlier. This time, the only way out was straight up. Even though I was glad I’d come, the superficial overview made me uneasy as I contemplated the weight of Kalaupapa’s history. Even Jack and Charmian had privately admitted their misgivings, and Jack later wrote a dramatic short story, “Koolau the Leper,” that enraged his hosts.

Yet it was Brother Dutton, not the Londons, I thought about as I struggled up the trail. When asked what could be done to help, Dutton’s reply was simple and profound. One does not have to travel far to encounter suffering or charity: “There are Molokais everywhere.” 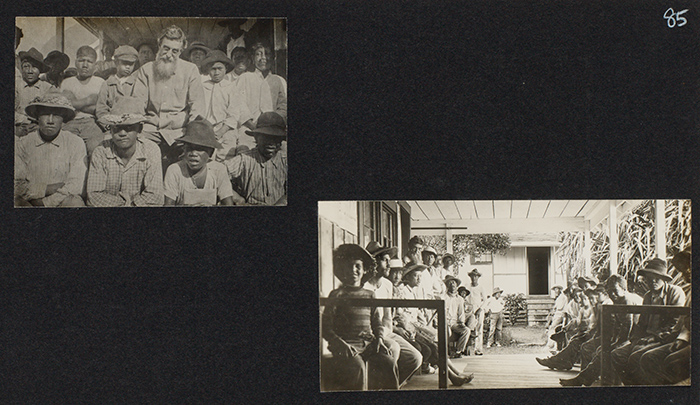 You can view the Jack London Photographs and Negatives collection online at the Huntington Digital Library.

Jenny Watts is curator of photography and visual culture at The Huntington.

Wow! Glad you made it back

My husband and I were also in Kaulapapa last August. The Mule Trip was a first ever for us and what an incredible day. Congrats to you in making the hike on foot! I hope that despite knowing of Jack London's writing that you found the area to be a beautiful and spiritual experience; walking where so many had also walked and suffered so much. Have you read Alan Brennert's Molokai? Great historical recount, although a novel. Thanks for your article.

My wife and I experienced the awesome beauty, and history of this wonderful island in 2015. You have to go, ride the mules down the cliffs, and hear the stories to appreciate the seldom seen (by very few) incredible beauty of the North coast of Molokai. Go if you can, not easy to get to, but worth every minute! Trip of a lifetime!! - Dan

Thanks for posting your note about your recent Kalaupapa visit.

I am certain that you know that London wrote not one, but two things
arising from his own visit to Kalaupapa, one received by all concerned
including his hosts, with gratitude and approval, the other with shock,
outrage, and a deep feeling of betrayal.

But, such was London's record as a writer, since he tailored his material
to whatever target audience seemed most appropriate at any given time,
often seeming to completely contradict himself between earlier and later
writings.

My wife and around another half-dozen relatives will be visiting Kalaupapa
this coming May, not as tourists, as London did, but instead on a family
pilgrimage.

Our group will be composed of Haoles (whites), Chinese and Hawaiians: we
count no fewer than three different ancestors as former Kalaupapa patients,
one of them Chinese, the other two Native Hawaiian. All of them died there.
We will be visiting the graves of family ancestors, all of us for the very first time.

I am a reader at the Huntington, and in years past was able to peruse the Jack London photo collection, including that portion of it derived from his brief visit to
the Hawaiian Islands, at length.

These are priceless historical documents indeed, and the Huntington is to commended for having purchased the collection from London's estate and to
have kept them safe ever since.

But the jury, especially within my own family, is still "out" on Jack London, and his attitude towards Kalauapapa and the people that lived there at the time of his visit.

Tourists, outsiders, even world-famous visitors, have one perspective about Kalaupapa, and this was, at least in part, conditioned by the writings of "hit and
run" visitors like Jack London. But those of us with a personal connection to the place, even two or three generations removed now, have a very different one.

Thanks again for posting your comments with the Huntington Library.