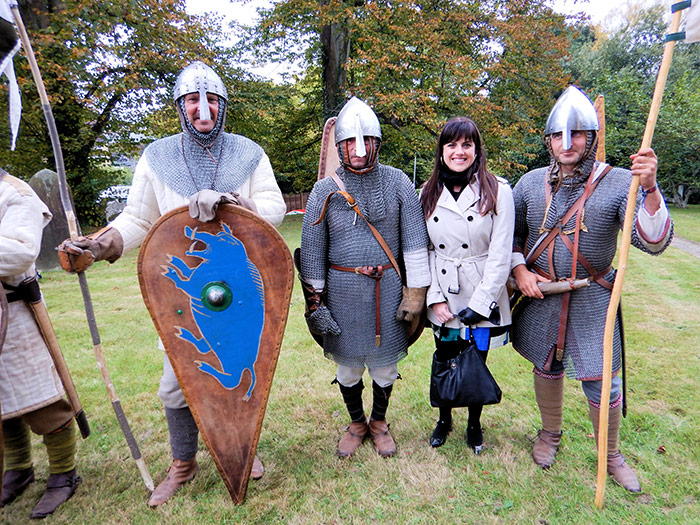 Medieval manuscripts curator Vanessa Wilkie in Battle, England, standing with visitors from France dressed as Norman soldiers, at the commemoration of the 1066 Battle of Hastings. Photo by Allan Millham.

I wrote my first serious history paper in 7th grade on the Battle of Hastings—the epic scene in 1066 when Duke William II of Normandy invaded England, defeating the Saxon King Harold. After the battle, England was ruled by a foreign king, court, and legal system.

Being a Hermione Granger type of student, I asked my mother to take me to the public library so I could do “real research”—no mere junior high textbook would do! For the first time in my young scholarly life, I read military histories, political histories, and books about the cultural clashes of Normans and Saxons.

I read about the victorious William, dubbed “the Conqueror,” and how he became the first Norman-French King of England and founded Battle Abbey on the site of the Battle of Hastings to celebrate his victory and pay respect to his fallen enemies. Hastings was the closest village, about seven miles away, so people started using that name to describe the battle. But, as Hastings referred to an established village, the town which grew up around the abbey was simply named Battle. It was in studying the events of 1066 that I first learned how one moment could impact the next, sending ripples through centuries. 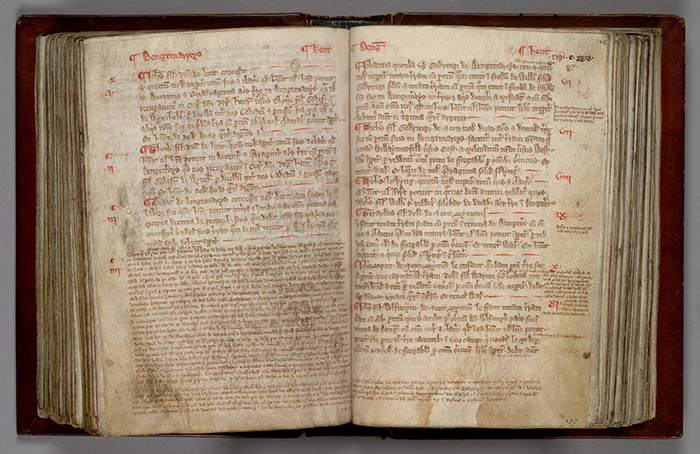 A page from a volume of 13th and 14th century abstracts of charters, granting authorities in the County of Kent. Battle Abbey Collection, BA 29, ff. 144v–145. The Huntington Library, Art Collections, and Botanical Gardens.

Fast forward to 2016. As the William A. Moffett Curator of Medieval Manuscripts and British History at The Huntington, I am the curator for the Battle Abbey Collection. It’s my professional (and personal) honor to be its steward. Scholars from around the world come into our archives to delve into this material. Henry E. Huntington, the founder of our Library, purchased the collection in 1923, and it quickly became one of his most famous holdings. It’s composed of 3,000 manuscripts, representing the monastic archive for the abbey, including original deeds, court rolls, and account rolls.

In the medieval period, Battle Abbey was an important Benedictine abbey, controlling vast lands throughout the region. The monks were landlords, and the abbey became a seat of feudal power. The collection contains three cartularies (books of charters) from the 13th through the 15th centuries that include early copies of royal, papal, and episcopal charters.

In the 1530s, Henry VIII broke with the Roman Catholic Church, dissolved monasteries, and sold the abbey lands to the Browne family. The Webster family purchased the lands in the 18th century. Ultimately, in the 19th century, the Websters sold large portions of the medieval records from the abbey. The collection also includes some of the family papers for the Brownes and Websters, the other part of which resides in the East Sussex Record Office in the United Kingdom, placed on deposit there by descendants of the Webster family. 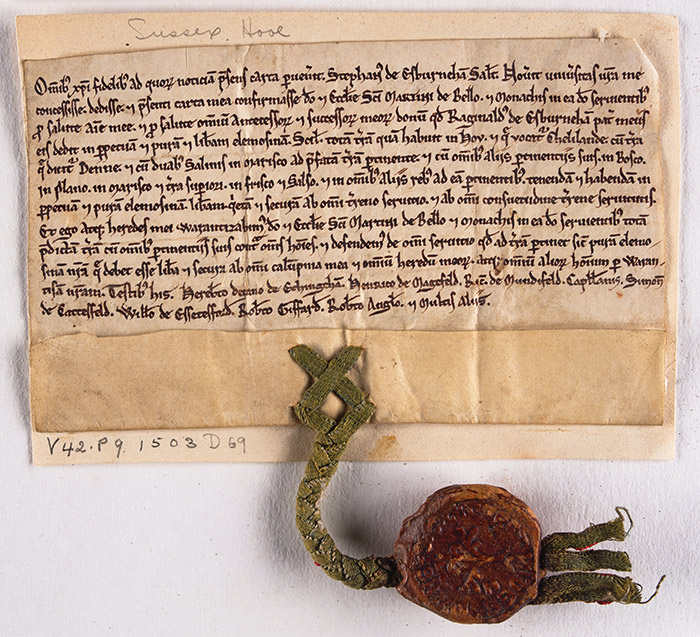 “Confirmation of Grant in Free Alms,” granting the abbot and convent of Battle control of certain lands, circa 1200. Battle Abbey Collection, BA 42/1503. The Huntington Library, Art Collections, and Botanical Gardens.

The Huntington’s collection offers deep understanding of the feudal practices of a medieval abbey and paints a detailed picture of the environmental landscape of these fertile lands. It also provides detailed financial accounts and serves as the founding documentation of the village that grew up on the site of one of the most famous battles in Western history. Earlier this year, this same collection, which draws so many scholars to it, pulled me away from it.

I was invited to the village of Battle to represent The Huntington and this collection during the commemoration—on Oct. 14, 2016—of the 950th anniversary of The Battle of Hastings. The group that organized the festivities, led by Chairman Simon Alexander, called the event Concorde 1066, using the word "concorde" to refer to “an agreement between like-minded people with a willingness to come together for a common cause.”

The event was a lovely reminder that The Huntington’s collections are relevant beyond our own beautiful gardens or the remarkable books published by our readers. The Battle Abbey Collection contains the medieval records for lands upon which people live today. Battle is a thriving community, and the abbey is now home to a school. The Huntington’s collection tells the origin story for this place. 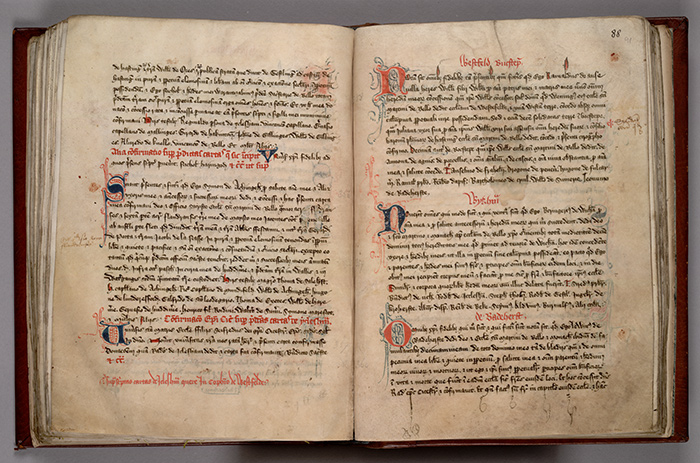 Concorde 1066 was a day of secular and religious services, parades, luncheons, receptions, and public displays. The guest list hinted at the wide range of people impacted by the Battle of Hastings: ambassadors to Great Britain from France and Denmark, the Home Secretary, Members of Parliament, the Lord Lieutenant of East Sussex, the High Sheriff, the Bishop of Chichester, the Band of the Corps of Royal Engineers, and most importantly, the families who live in the village of Battle.

Battle Abbey sits majestically in the center of their town. They go to school there, attend local festivals and gatherings there, and enjoy tourism as a major part of their local economy. Battle residents are acutely aware of the historic significance of the site upon which their village sits. They are proud of this legacy and are generous hosts to the throngs of tourists who visit Battle every year.

At a time when Britons were debating their place within Europe, people from all walks of life gathered in this village to reflect on what it meant when the Normans conquered the Saxons, what the legacy of that is, and what it means for English-speaking people around the world. On that special day in October, political figures from Great Britain and the European continent, residents, and one American curator gathered to explore a shared past. 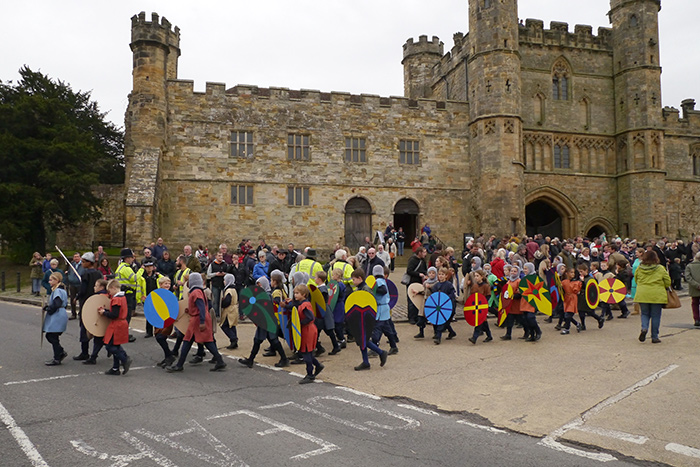 Schoolchildren in medieval dress parade in front of the gatehouse of the Battle Abbey. Photo by Paul Hollinghurst.