Fairy Hunting at The Huntington 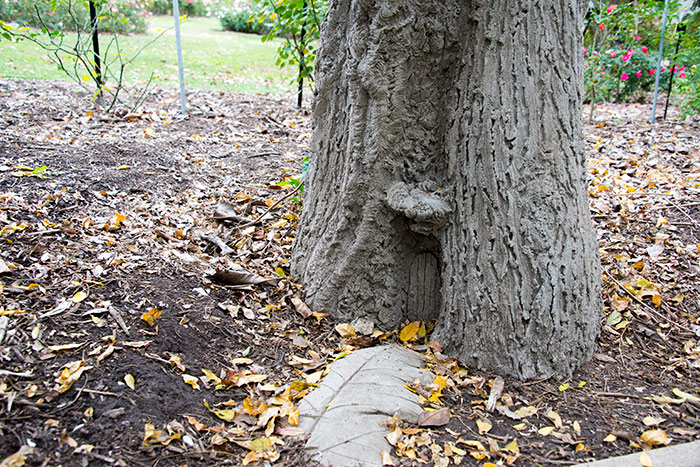 A fairy door located along the western edge of The Huntington’s Rose Garden. Photo by Kate Lain. The Huntington Library, Art Collections and Botanical Gardens.

The next time you walk through the faux-bois trellises along the western edge of The Huntington’s Rose Garden, see if you can find a small door, carved in miniature at the base of a tree trunk, with a pathway to it resembling a fallen leaf. The door is easy to miss, but it rewards careful observers. Children especially seem to delight in this tiny doorway—as if they expect a fairy to step out at any moment.

While young visitors might seek fairies in The Huntington’s gardens, I search for them in the Library’s collections on the history of science and technology. The Library may seem like an odd place to go fairy hunting. But as a scholar writing a book on the miniature and Victorian literature, I’ve learned this: miniature things have a habit of creating enchantment in the most unexpected places. And, despite the seeming unlikelihood of such a pursuit, I again and again find fairies in the pages of popular scientific literature. 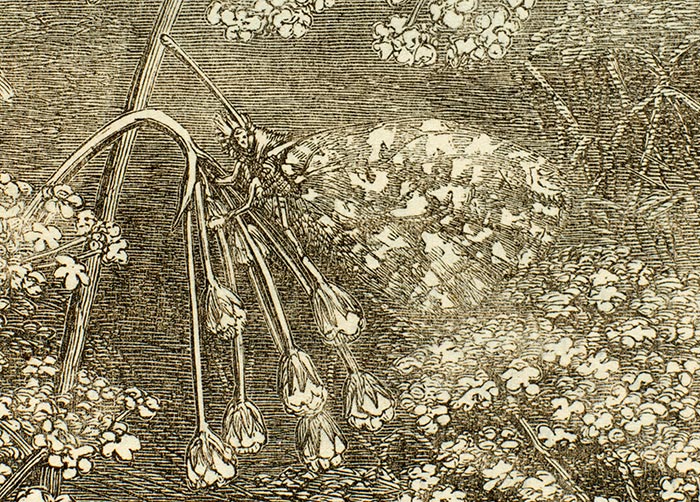 An orange-tip butterfly, depicted with human features, from “The Disguises of Insects” (1867) in Hardwicke’s Science-Gossip: An Illustrated Medium of Interchange and Gossip for Students and Lovers of Nature. The Huntington Library, Art Collections and Botanical Gardens.

Take this example: I was recently reading through a bound collection of a 19th-century periodical that is promisingly called Hardwicke’s Science-Gossip: An Illustrated Medium of Interchange and Gossip for Students and Lovers of Nature. As I skimmed through articles on the movement of diatoms and on the Great Exhibition of Paris, I came across an article by the naturalist Arthur R. Wallace on “The Disguises of Insects” (1867). An illustration shows an orange-tip butterfly with a human face hiding amidst the foliage of a tree. The butterfly is, in fact, a fairy.

Wallace’s illustration is part of a 19th-century scientific tradition of describing the natural world as fairyland. Henry Slack, who later became president of the Royal Microscopical Society, described a group of protozoa in 1861 as “a tree from fairy-land, in which every leaf has a sentient life.” Charles Kingsley, a naturalist and children’s author, explained in an 1846 lecture on “How to Study Natural History” that, “in the tiniest piece of mould on a decayed fruit, the tiniest animalcule from the stagnant pool, will imagination find inexhaustible wonders, and fancy a fairy-land.”

These authors aren’t actually describing the natural world—who knows what a tree from fairyland looks like anyway? Rather, they are telling us how we should perceive nature—with a tingling sense of enchantment. This, we should think as we gaze at the natural world, is fairyland. 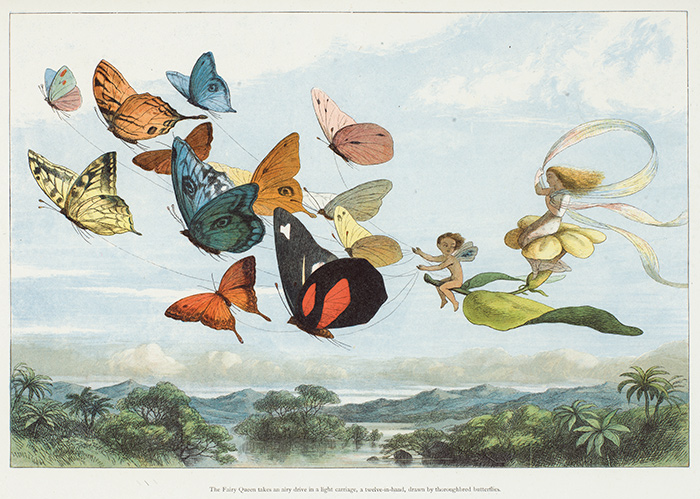 Richard Doyle, illustration of “The Fairy Queen Takes an Airy Drive in a Light Carriage, a Twelve-in-hand, drawn by Thoroughbred Butterflies” from In Fairy Land: A series of pictures from the elf-world by William Allingham (1870). The Huntington Library, Art Collections and Botanical Gardens.

Let me pause here to give a brief history of the miniature fairy. The idea of miniature fairies is a relatively new one. In folklore and superstition, fairies are typically described as child-sized, perhaps three feet in height. Most scholars agree that Shakespeare was the first to imagine miniature fairies in Mercutio’s Queen Mab speech in Romeo and Juliet (1597). In 1798, the artist Thomas Stothard depicted fairies with butterfly wings for the first time in his illustrations for Alexander Pope’s The Rape of the Lock. Popular tradition says that a friend had suggested to Stothard that he paint Pope’s sylphs with butterfly wings. Stothard supposedly replied, “That I will, and to be correct, I will paint the wing from the butterfly itself.” Then, he ran out into his garden.

After Stothard, images proliferated of butterfly-winged fairies dwelling in flower buds and acorn cups. Artists and illustrators painted fairies in detailed natural landscapes. In fairy literature, children were transported to magical worlds adjacent to our own. In Jean Ingelow’s novella Mopsa the Fairy (1869), the child protagonist “Captain Jack” discovers a nest of three tiny fairies in a tree and then is whisked away to fairyland atop an albatross. The child reader might have felt a similar sense of transport as she turned the pages of a book filled with fairy images. 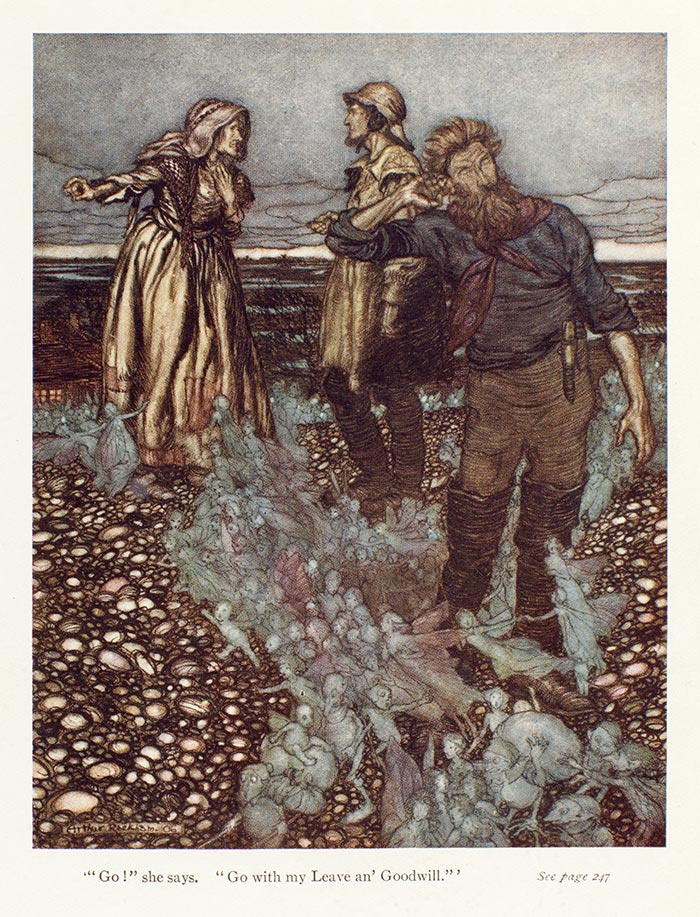 Victorian fairies were always associated with nature, but not always with the most pleasant parts of the natural world. In this Arthur Rackham illustration for Puck of Pook’s Hill by Rudyard Kipling, fairies swarm across the natural landscape in invisible multitudes, causing disease. The Huntington Library, Art Collections and Botanical Gardens.

Science educators in the Victorian era believed that the popularity of fairies could be used to lure young people into the study of the natural world. In works such as Fairy Know-A-Bit (1866) by Charlotte Tucker (known by the pen name A.L.O.E.), fairies guide children through the marvels of the natural world. Nature, in these works, contains greater wonders than fairies. Arabella Buckley, in her popular and widely reprinted book The Fairyland of Science (1879), teaches her young readers how to enter the fairyland of nature. There is only one condition: “Like the knight or peasant in the fairy tales, you must open your eyes” to the wonders of nature. Fairyland, she suggests, is all around us.

So I urge you: go fairy hunting at The Huntington. Start with the fairy door in the Rose Garden or another in the Children’s Garden and then wander on to other parts of the grounds. I can’t guarantee that you’ll see fairies. But you’ll certainly find fairyland here—if you open your eyes to look for it. 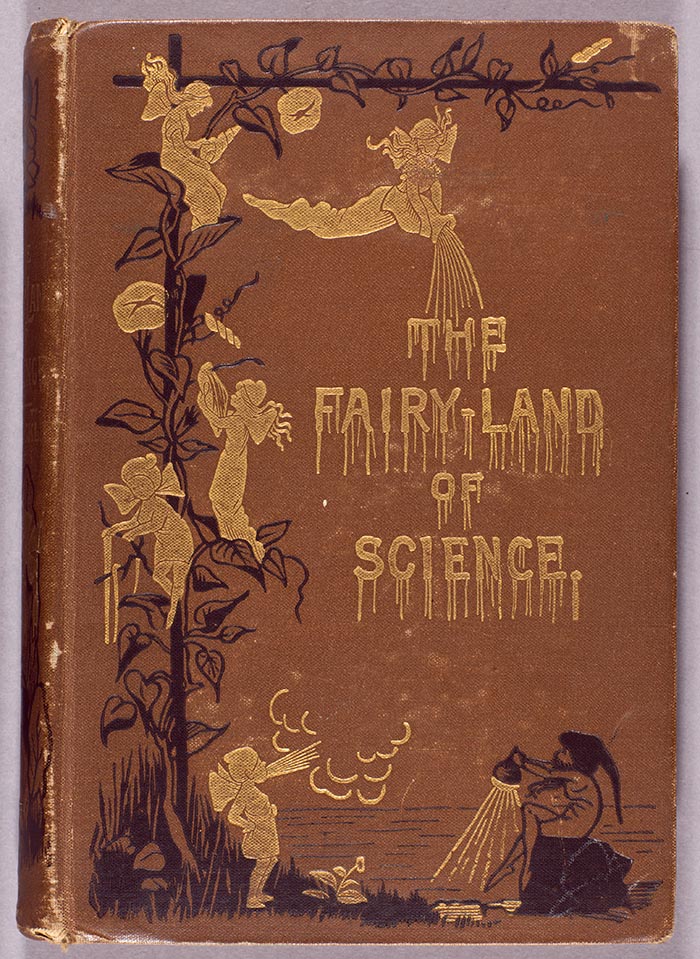 Cover of The Fairyland of Science (1879). The Huntington Library, Art Collections and Botanical Gardens.

Laura Forsberg is adjunct professor of English at Concordia University Texas and a 2016–17 National Endowment of the Humanities Fellow at The Huntington.

A Resurgence of Victory Gardens
Jul. 1, 2020 by Usha Lee McFarling
1 Comment(s)
In an effort to increase self-sufficiency and reduce trips to the grocery store during our current pandemic, a growing number of people are adding vegetable and herb gardens to their own yards ...
More

It could be for fairies, but I've never seen anyone come or go. So many things could be possible, that I call it the door to imagination.
Everyone that sees it has a different thing behind it.

Arthur R. Wallace's illustration likely did not intend to show a human face. As shown in the picture link below, orange tip butterflies have specked eyes. What may appear to be a vague depiction of a human face may, in fact, be an accurate depiction of a butterfly's eye.

Thanks for this very interesting point. Your comment speaks to the ambiguity in Victorian popular science between observation and fantasy. The illustration may well be an accurate depiction of an orange tip butterfly, but the marks on the eye are also placed as if to suggest eyes, a nose, and even a forelock. This may be either intentional or unconscious on the part of the artist, but it is notable.

Lest you might think you have a small audience, let me tell you that Sunday (when I docent in the Rose Garden), I made multiple trips to the fairy door with visitors who came up to ask where it was!

I volunteer in the Rose Garden and never noticed we had a fairy dwelling in the faux bois! I'll be checking it out when we're pruning tomorrow. BTW, I see you included a lovely drawing by Richard Doyle in this blog post. He's the uncle of Arthur Conan Doyle.

A Resurgence of Victory Gardens
Jul. 1, 2020 by Usha Lee McFarling
1 Comment(s)
In an effort to increase self-sufficiency and reduce trips to the grocery store during our current pandemic, a growing number of people are adding vegetable and herb gardens to their own yards ...
More