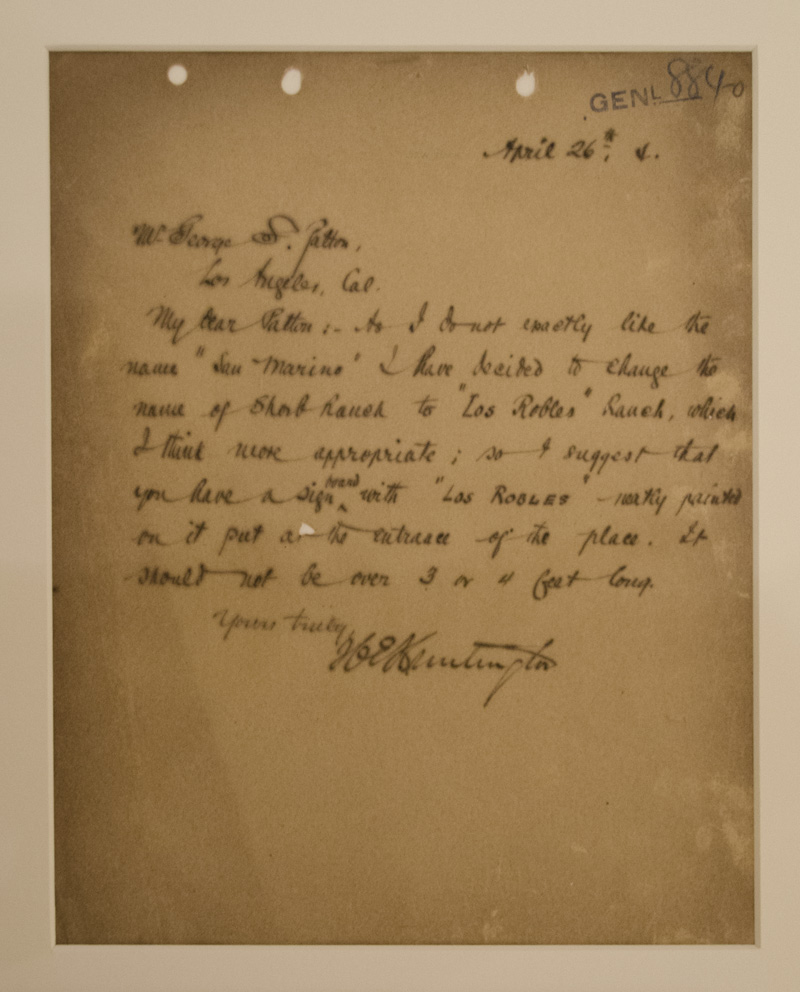 I came across quite a few interesting pieces when I was researching my current exhibition, “Cultivating California: Founding Families of the San Marino Ranch.” When I was researching George S. Patton (senior), I stumbled upon an item that was begging to be displayed. On an onion-skin sheet dated April 26, 1904, Henry E. Huntington writes:

My dear Patton: As I do not exactly like the name “San Marino” I have decided to change the name of Shorb Ranch to “Los Robles” Ranch, which I think more appropriate; so I suggest that you have a sign board with “Los Robles” neatly painted on it put at the entrance of the place. It should not be over 3 or 4 feet long.

I suspect Huntington wanted to separate the property from its past. The man who named the property, James De Barth Shorb, was deeply in debt when he died in 1896. His wife, Maria de Jesus “Sue” Wilson Shorb, lost the property in foreclosure to Farmers and Merchants Bank after a well-publicized trial. If I purchased a property with such a history, I would change the name, too.

But San Marino—as both the estate of James De Barth Shorb and the property surrounding the home—was very well known and had been since the 1880s. It was a familiar location for people throughout Southern California and was regularly referenced in the society pages of the Los Angeles newspapers. San Marino was not going to disappear, even if Huntington tore down the three-story Victorian mansion in 1906. 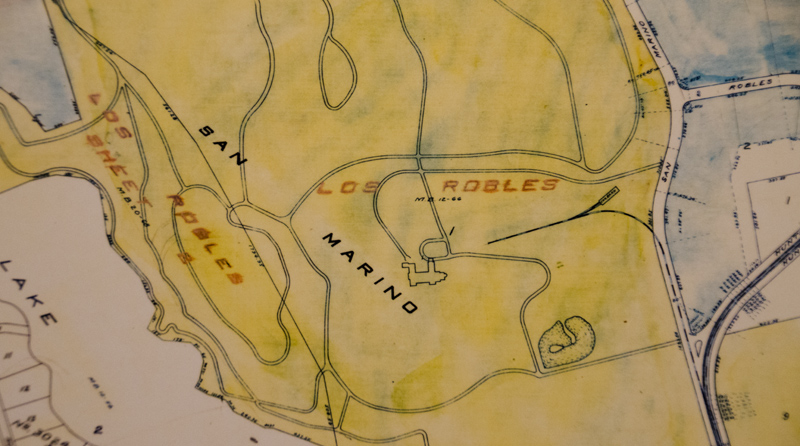 When Huntington purchased San Marino/Los Robles in 1903, he already owned a large estate in downtown Los Angeles. The San Gabriel Valley property was an investment—land for crops until it could be subdivided and sold for enormous profit. I imagine that when Arabella Huntington started advising Henry Huntington on his new home, she recommended a country house akin to those in Newport, R.I.—an impressive manse surrounded by acres of land. And Arabella always had a flare for the dramatic, so Los Robles (which even today I’m sure I mispronounce: is it ROBE-els or ROBE-leis?) would not do.

Come 1913, the maps show the property as both San Marino and Los Robles. Huntington’s dislike for the name “San Marino” must have waned enough for him to agree that the new city could be called by that name. I also suspect that he enjoyed naming the new city after a very wealthy sovereign nation surrounded by Italy, as his new city was in a similar situation: a very wealthy enclave surrounded by other cities (Pasadena, South Pasadena, and Alhambra, to be specific) interested in annexing the estates for themselves.

"Cultivating California" is on display through May 13, 2013, in the West Hall of the Library.

Thank you very much for following up my query. I wasn't sure it was in the right place or that anyone would read it. Now I'm back in the UK, where I live, I didn't expect to get any solution. I shall now look up Red-whiskered Bulbuls and find out about them.

I wonder if this is the place to post this enquiry. On 18 April in Huntington Gardens I saw a pair of birds, twice. Afterwards I was unable to identify them in two US bird books or online. They resembled Phainopeplas or Silky Flycatchers in shape and size. They were 9-11" long, had long tails and were mainly black, with large black crests, straight black bills but mainly white underneath, mainly white lower cheeks but with a clear semi-circular red patch under each eye and a red patch under the rump. I wonder if anyone can identify them for me, please.

Ha, this question stumped me. While birds are not our specialty here at The Huntington, I was able to track down a couple of resident birders who have an answer for you: red-whiskered bulbuls. Happy birding!

I am anxious to see the Founding Families exhibit. Does it include any mention of my great-grandfather and co-founder of San Marino, Richard Lacy? Many of his descendants are still in the area.

Sorry to say that Richard Lacy is not included in the exhibition. He falls outside the scope of the show, which focuses on the Ranch and its inhabitants as a prologue to the founding of the city in 1913.

I hope you can make it in to see the exhibition. Note that it closes May 13, so make your plans soon!