EXHIBITIONS | Bukowski on the Inside

"She is a joy. I look at her and light goes all through me." 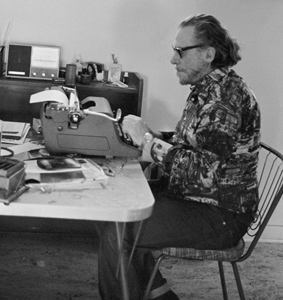 Quick quiz. Who wrote it? William Carlos Williams? Wallace Stevens? Alice Walker? None of the above?

That's right, none of the above. This was Charles Bukowski talking to fellow poet William Wantling about his daughter, Marina, born in 1964. He continues on, saying, "I am soft, man, soft, and I don't mind a bit." This from a man who spent a lifetime nurturing his tough side through loud, raw, expletive-laced poetry and prose, by hard drinking, fierce misogyny, and general rabble-rousing.

Huntington curator Sue Hodson says there is a tenderness under the hard shell that is exquisite and painful. "When you think about how he touched people's lives, it's incredibly powerful. He offered comfort, gave people hope and something to hang on to," she said. "He said one of his happiest moments was when he got a letter from a jailbird in Australia who told him his book was the only one that got passed from cell to cell. He was struck by the difference he was making for people who were down on their luck, imprisoned, and troubled."

The softer side of Bukowski plays out in "Love Poem to Marina," published by Black Sparrow Press in 1973. A broadside of it, beautifully and simply rendered, will be included in the exhibition "Charles Bukowski: Poet on the Edge," which opens tomorrow in the West Hall of the Library.

"and I stretch on the grass and sand
And she rips dandelions up
And places them in my hair
While I doze in the sea breeze.
I awaken
Shake
Say, "what the hell?"
And flowers fall over my eyes and my nose
And over my
Lips.
I brush them away
and she sits above
giggling." 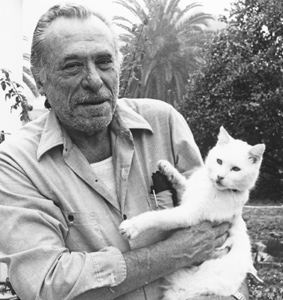 Even Bukowski had that tender father-daughter thing going on. It wasn't the only way he tapped into his soft side. He was a cat lover too, and wrote a lovely poem—the story of Bukowski himself—about how he nursed back to health a very unwell cat who appears one night at his door.

"he wouldn't touch the water, I dipped my finger into it
and wet his mouth and I talked to him, I didn't go any-
where, I put in a lot of bathroom time and talked to
him and gently touched him and he looked back at
me with those pale blue crossed eyes and as the days went
by he made his first move
dragging himself forward by his front legs
(the rear ones wouldn't work)"

The title of the poem, "History of One Tough Motherf****r" (asterisks are mine), suggests something edgy, raw, and foul-mouthed is about to happen. But the opposite holds true. As the poem unfolds, it's a love story—survival against the odds, and the tender partnership that serves as the underpinnings to it all. And, ultimately, it's soft stuff, very soft stuff. Even if you don't like cats.

"you know the rest: now he's better than ever, cross-eyed
almost toothless, but the grace is back, and that look in
his eyes never left...
and now sometimes I'm interviewed, they want to hear about
life and literature and I get drunk and hold up my cross-eyed,
shot, runover de-tailed cat and I say, 'look, look
at this!'"

Interpreting the Music of Harold Bruce Forsythe
Aug. 5, 2020 by Karla Nielsen
1 Comment(s)
Most researchers using our literary collections at The Huntington are writing biographies or academic articles. But we also work with publishers and artists ...
More