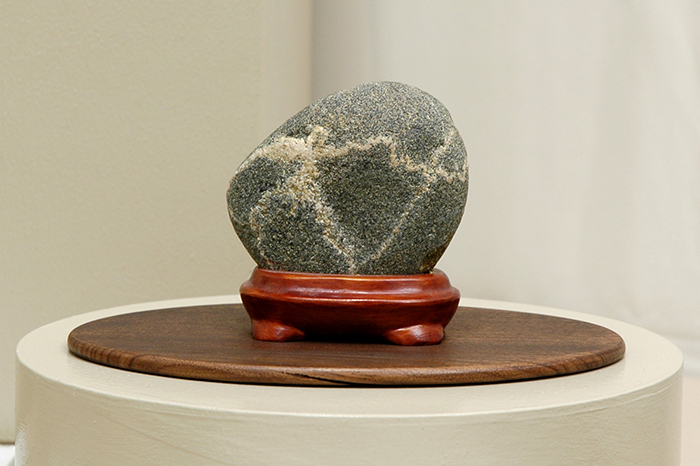 The Huntington will host the annual Viewing Stones Show presented by the California Aiseki Kai from Dec. 26 to Dec. 30. Shown here: “Ribbon Dancer,” collected in South Korea by Don and Chung Kruger. (Note: the stones pictured in this story were photographed during past shows. This year’s exhibits may vary.) Photo by Lisa Blackburn.

If the hectic pace of the holiday season has you craving a bit of tranquility, try this centuries-old tip for restoring inner calm—spend some quiet time in the contemplation of stones.

The annual Viewing Stones Show, presented by the California Aiseki Kai, will take place Dec. 26–30 in The Huntington’s Brody Botanical Center. A complementary exhibition by the American Viewing Stone Resource Center will be on display during the same dates in the Japanese Garden’s Ikebana House.

Contemplating the subtle, graceful forms of nature’s artistry in stone is said to uplift the spirit and stimulate the mind—a wonderful way to usher in a new year.

Viewing stones are rocks found in nature—on a beach, in the desert, along a mountain trail—whose unique qualities have caught the discerning eye of an avid collector. Wind, water, and time have transformed these rocks into shapes resembling landscapes, distant mountains, animals, and other forms. Centuries of blown sand may have etched the pattern of swaying grass into a stone’s surface, while a cluster of mineral deposits in another stone may reveal the petals of a chrysanthemum or a mist-shrouded moon. Resemblances are usually suggestive rather than literal, inviting the viewer to look beyond the surface for deeper meaning. 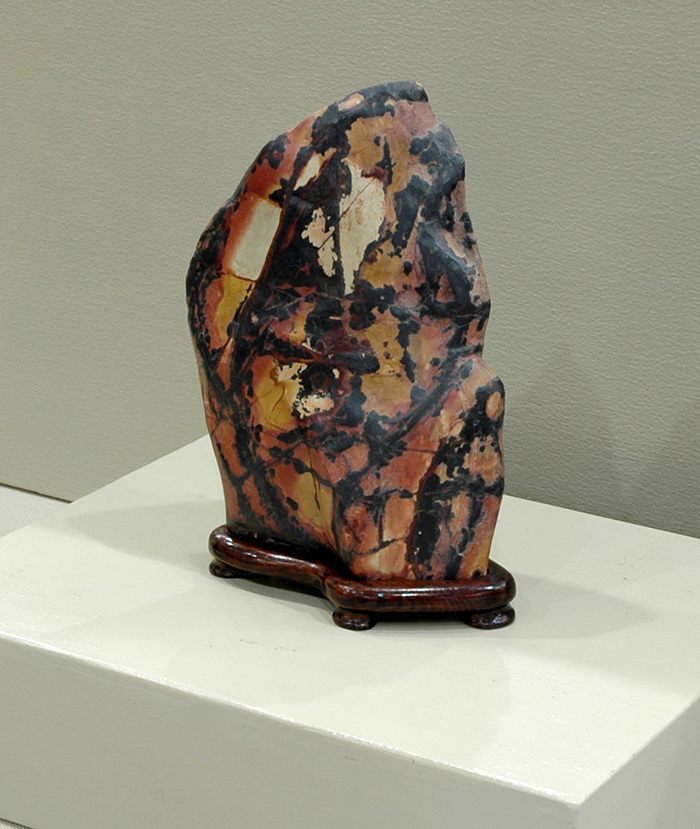 A stone’s resemblance to a familiar form is usually suggestive rather than literal, inviting the viewer to look beyond the surface for deeper meaning. This stunner from the Mojave Desert, titled “Indian Blanket Stone,” was collected by Bill Hutchinson. Photo by Lisa Blackburn.

As the name “viewing stones” implies, the act of contemplation is essential to the art itself. Each viewer brings something different to the art, moved by his or her own memories and associations to draw enlightenment from the stones.

The California Aiseki Kai is a Gardena, Calif.–based club of enthusiasts and collectors who study the ancient traditions of viewing stones, participate in organized hunts for stones, and mount an annual exhibition of their stones at The Huntington each December. (This year’s show is their 28th.) Nina Ragle, who co-founded the group with her husband, Larry, in 1983, says that collecting and displaying stones is a hobby that has a broad appeal.

“Anyone can do it,” says Ragle. “I began collecting viewing stones in 1979 and was hooked the first time I walked the Eel River. I love the hunt! I love the sense of calm the stones produce in an otherwise chaotic world. Whether I’m gazing at a properly displayed stone or looking for a potential candidate, the journey is intensely personal and peaceful.”

The history of stone appreciation dates back to ancient China. Shown here is a 17th-century woodblock print of a Chinese scholar’s rock, pictured in the rare illustrated book Ten Bamboo Studio Manual of Calligraphy and Painting, ca. 1633–1703. The Huntington Library, Art Collections, and Botanical Gardens.

The history of stone appreciation began in ancient China, where Chinese “scholar’s rocks” were collected as early as the Han Dynasty (206 B.C.–220 A.D.). Poets of the Tang Dynasty (618–907) made references to them in their writings. The stones were introduced to Japan around 600. During the Muromachi period (1338–1573), the influence of the tea ceremony and other arts associated with Zen Buddhism, which emphasized inner enlightenment, led to a preference for stones with subtle forms that were more metaphor than precise representation. By the 19th century, the art had become more formalized with the development of classifications, most importantly Suiseki (scenic landscape forms and images reflecting the natural world). Subclassifications range from Taka-ishi (waterfall-shaped stones) and Dobutsu-ishi (animal-shaped stones) to Bi-seki (beautiful stones that may be polished). The 20th century saw the popularity of viewing stones expand into the international community. Today it is practiced and appreciated by enthusiasts around the world.

A key element in the art of viewing stones is the way the stones are displayed. This is where the collector’s own artistry comes into play. Each stone is positioned to be seen from its most compelling angle, typically mounted on a hand-carved wooden base, known as a daiza, or set in a sand-filled tray, a suiban. “We don’t alter the stone but we can alter the way in which it’s presented,” says Ragle. “We try to elicit an emotional response with an effective display. And that response will be determined by the viewer’s life experience.” 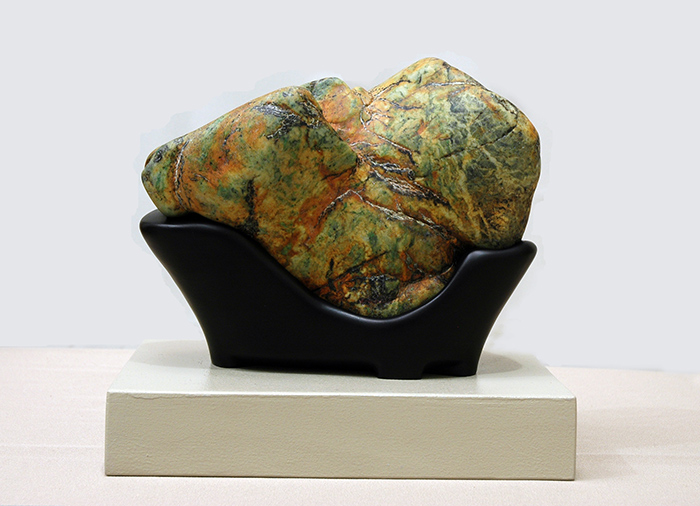 A key element in the appreciation of viewing stones is the way the stones are displayed, often mounted on a hand-carved wooden base known as a daiza . Shown here in its distinctive daiza is “Candy Jade Mountain,” a beautiful stone from the Trinity River, Calif., collected by Ken McLeod. Photo by Lisa Blackburn.

One of the newest members of the Aiseki Kai is Jack Levy, who joined the club in 2014 after stumbling upon the show at The Huntington. A retired scientist with a Ph.D. in genetics, Levy knew nothing about the traditions of viewing stones but was immediately intrigued. His first stone hunt with the group was a trip to the Imperial Valley’s Yuha Desert in the spring of 2015. “There are many stones in the Yuha that have wonderful color and patina,” says Levy, “but finding one that also has an interesting shape and is consistent with the Asian viewing stone traditions proves to be amazingly difficult.”

Finding the perfect stone, however, is only one of the many satisfactions of the pursuit. “For me, viewing stones provide a means of combining my loves of nature and art with woodworking challenges—making the wooden bases, the daiza,” says Levy. “I’ve begun learning to make them under the watchful eye of two Aiseki Kai members, Al Nelson and Phil Hogan. I have completed only one daiza so far, for a 'plateau and mountain' stone from the Yuha Desert.” Levy plans to exhibit that stone, and possibly several others, at this year’s show. 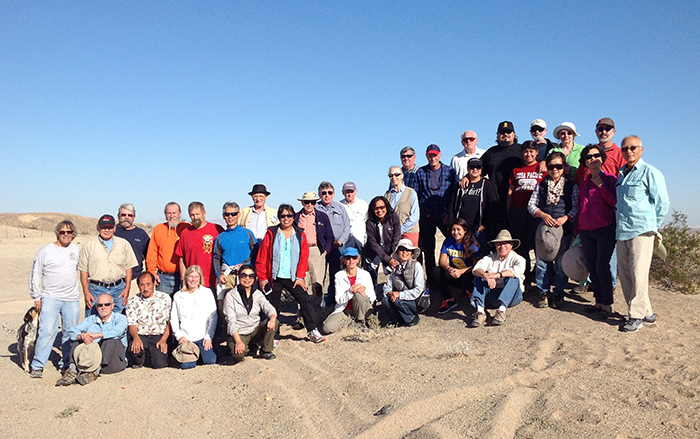 Members of the California Aiseki Kai posed for a group portrait this past November during a stone hunt in the Imperial Valley’s Yuha Desert. Photo by Nina Ragle.

Stop by the event and draw some inspiration of your own from nature’s artistry—and from the men and women who have carried stones out of the wilderness and revealed them to be works of art. You might find yourself tempted to join their ranks; their enthusiasm is highly contagious.

The California Aiseki Kai’s 28th annual Viewing Stones Show will take place Tuesday, Dec. 26, through Saturday, Dec. 30, in The Huntington’s Brody Botanical Center. A complementary display by the American Viewing Stones Resource Center can be seen during the same dates in the Japanese Garden’s Ikebana House. Hours for both exhibitions are from 10 a.m. to 5 p.m. each day. The event is included with general admission. 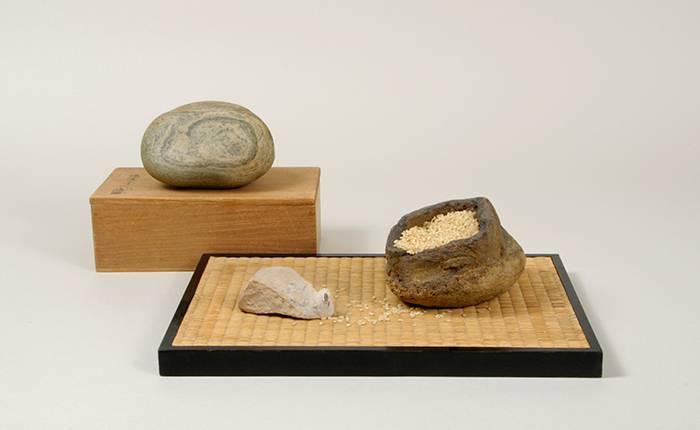 These are just beautiful! What a wonderful way to look at nature.