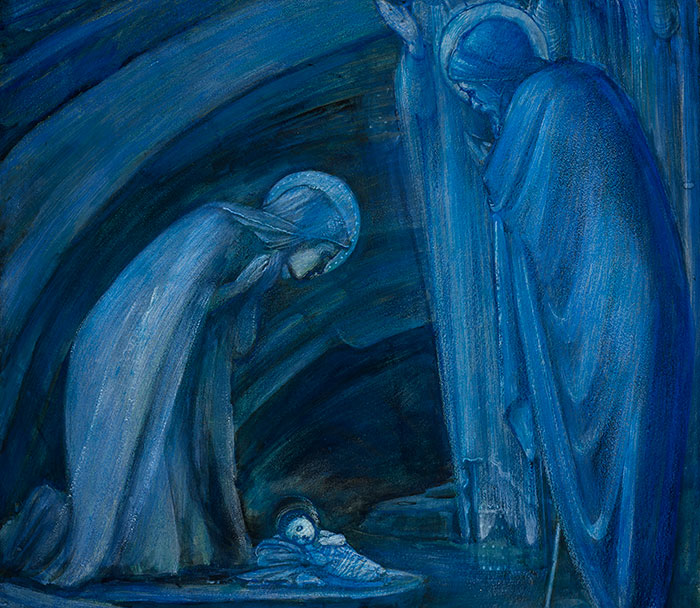 Detail of the lower portion of The Nativity, by Edward Coley Burne-Jones (1833–1898), in which Mary, Joseph, and a small group of angels gaze at the infant Jesus in wonderment. The Huntington Library, Art Collections, and Botanical Gardens.

Before I saw The Nativity by Edward Burne-Jones, I asked myself if The Huntington really needed another design for a piece of 19th-century decorative art? We already had more than 1,000 drawings for wallpapers, carpets, tapestries, and ceramics by members of a British group of 19th-century artists called the Pre-Raphaelites.

Inspired by the art and culture that preceded the period of the great Renaissance artist Raphael (1483–1520), the Pre-Raphaelites emulated artists of the 1400s because they depicted nature more realistically than idealistically, and because their medieval craft guilds offered an alternative type of community to the industrialization of the mid-19th century.

After I saw The Nativity in person, the answer to whether we needed it was a decisive “yes.” This work of art, a moving and exquisite depiction of the birth of Jesus, was unlike anything The Huntington already owned.

Artist Edward Burne-Jones (1833–1898) rendered this work—which measures almost five feet high—in various dreamy shades of blue offset with touches of gold. The elongated scene is divided into two sections by a swooping “S” curve, reminiscent of historiated letters in manuscript illuminations. In the upper portion of the painting, a crowd of angels appears before shepherds, who shield their eyes from the dazzling vision. The background is filled with a tangle of skeletal trees. In the lower portion of the painting, Mary, Joseph, and a small group of angels gaze at the infant Jesus in wonderment. Here the artist painted a cave in the background, creating a sense of protection and quiet piety that contrasts with the decorative brilliance above. 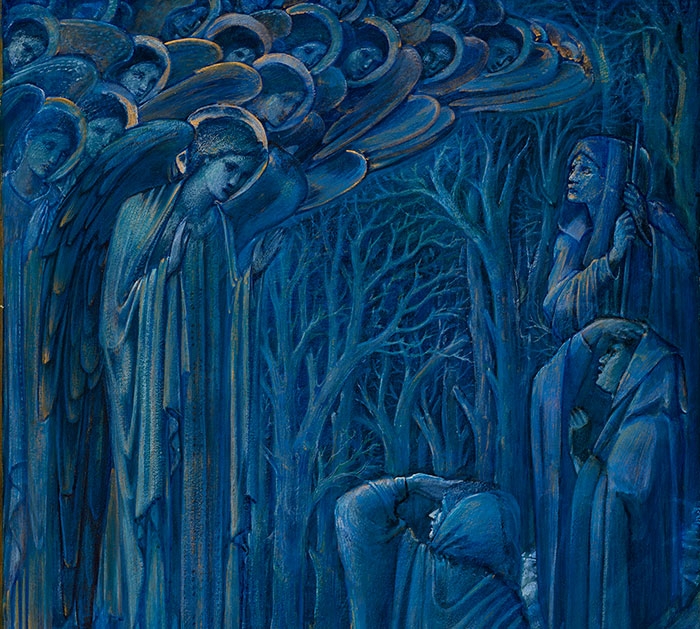 Detail of the upper portion of The Nativity, showing a crowd of angels appearing before shepherds. The Huntington Library, Art Collections, and Botanical Gardens.

It is a beautiful thing . . . but, what, exactly, is it? We know that it is fully painted with opaque pigments on two joined sheets of paper that have been mounted to cloth, so, we could as easily call it a drawing as a painting. That the artist himself designed the gilded frame for the work means that he intended it to be a finished work of art. However, we know that it also served as a preparatory design for another work: a stained-glass window in the cathedral of the artist’s hometown of Birmingham, England.

A little research revealed that the Victoria and Albert Museum in London owns a large-scale photograph—actually many smaller photographs pieced together—of this work on paper. It seems that the artist first made a rough design for the window, photographed it and enlarged it to a scale the size of the window, and then painted over the photographic image to fine-tune the figures and bring out the details that were important for stained glass.

For example, the feathers in the angels’ wings and the rocks above the cave were delineated more carefully since, as a window in a cathedral, they needed to be legible from a distance. Given the success of the design on paper, the artist then decided to work the image up more fully, adding highlights in gold and designing a frame to make it the ravishing and finished work of art that it is today. Yes, it is a beautiful thing . . . but it’s also fascinating because of what it can tell us of the artist’s working process. Because of its sensitivity to light, this new acquisition is on display for a very brief time in The Huntington Art Gallery’s Works on Paper Room from Feb. 22 to March 19, 2018. Don’t miss the opportunity to see this exquisite work in person.

Catherine Hess is interim director of the Art Collections.

This is a really nice description of the history and technique of this piece. Thank you!

Are you planning a reproduction of the Bourne-Jones nativity. He is my favorite artist and the blue color would be perfect for my blue theme.

Are you planning a reproduction for sale of the Bourne-Jones nativity ? He is my favorite artist.

Catherine Hess, thanks so much for the post.Really thank you! Great.

I saw this most beautiful work today at the Huntington. I am so glad that you decided to obtain this watercolor. It is most memorable and a wonderful addition to the Huntington. Thanks!

Thanks Catherine Hess! Hoping I can make that one come true this month