Opening Nov. 18, the exhibition “COLLECTION/S: WCCW/five at The Huntington” will be on view in the Virginia Steele Scott Galleries of American Art through Feb. 12, 2018. Part of the second year of /five —The Huntington’s five-year contemporary arts initiative focused on creative collaborations—the exhibition will be a manifestation of The Huntington’s yearlong partnership with the Los Angeles-based Women’s Center for Creative Work (WCCW). The exhibition will feature new work by seven artists, selected by WCCW, who have conducted research in The Huntington’s library, art, and botanical collections. Catherine G. Wagley, a freelance journalist who writes about art and visual culture in Los Angeles, focuses in this post on the exhibition. 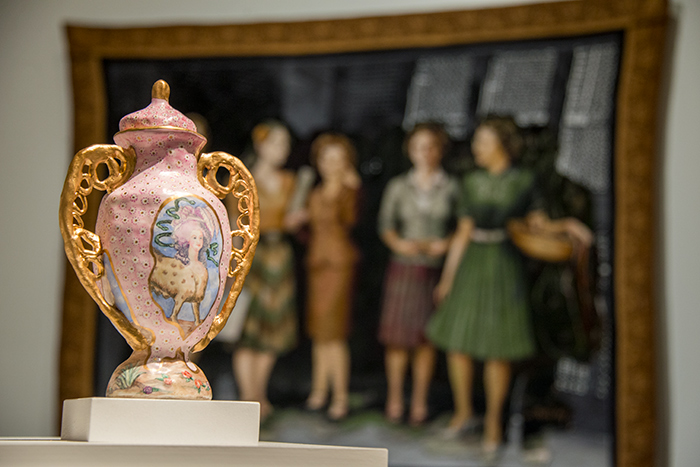 The Three Graces and Marie Antoinette, a new porcelain and enamel vessel by Juliana Wisdom, sits atop a pedestal in "COLLECTION/S: WCCW/five at The Huntington." Soyoung Shin's tapestry 24,000 BCE–1992 CE, made from a design by Melanie Florio, hangs on a nearby wall. Photo by Kate Lain.

For the better part of 2017, seven female-identified artists have been mining The Huntington’s collections, bringing their own interests to bear upon the institution’s holdings. On Nov. 18, when the exhibition “COLLECTION/S: WCCW/five at The Huntington” opens in the Virginia Steele Scott Galleries of American Art, the physical fruits of their labor will finally be available to the public. Artist Juliana Wisdom’s delicate porcelain vessels will coexist with Zya Levy’s ghostly plaster cacti and Kiki Loveday’s emergent archive of LGBTQ letters and love stories. The exhibition offers a glimpse into projects that are even bigger and deeper than the work in this show, and will likely extend beyond the time these artists spent in residence at The Huntington. When you enter the gallery, you’ll come face-to-face with a wall text explaining how The Huntington partnered with the feminist, community-nurturing Women’s Center for Creative Work (WCCW) to select these artists: Wisdom, Loveday, Levy, Olivia Chumacero, Sarita Dougherty, Jheanelle Garriques, and Soyoung Shin. In the text, curators Jenny Watts and Catherine Hess acknowledge that The Huntington’s founders “excluded women from the professional staff” and “surely did not anticipate the myriad challenging, provocative, and insightful ways these artists would interpret the collection.” In other words, the fact that a multidisciplinary group of emerging artists, many of whom have non-traditional relationships to their fields, were invited in to question and probe the institution’s collections and legacy connotes progress in itself. “The process has been iterative, with a lot of back and forth,” says curator Watts, who co-organized “COLLECTION/S” and worked with the seven artists over the past months. She was speaking about the curation of this exhibition, but the same could be said about the entirety of the project. The works we see on view result from many negotiations. 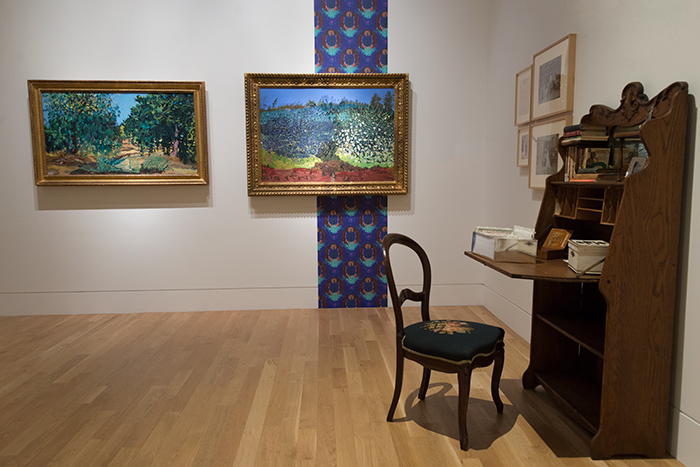 In one section of "COLLECTION/S," paintings and wallpaper made by Sarita Dougherty are installed adjacent to items related to Kiki Loveday's archive of LGBTQ letters and love stories. Photo by Kate Lain.

When artist Soyoung Shin initially started researching the highly detailed, ornate tapestries that were among the first major purchases Henry Huntington made together with his future wife Arabella (who was very interested in French 18th-century decorative arts), she became fascinated by their rarity. They’re the only intact set designed by artist François Boucher and made by craftspeople at the Beauvais Tapestry Manufactory in Northern France. “What tools does a collecting institution have to preserve such a craft?” Shin wondered. She thought at first that perhaps she could develop a digital algorithm to make these tapestries reproducible, then realized the scope of this undertaking outstripped the time she had; so, she made her own tapestries, taking the Beauvais work as an inspiration. With the help of painter Melanie Florio and a Belgian factory, she made two tapestries and then combined them: she replaced the men, programmers of the early general computer ENIAC, in the first tapestry with the women in the second, all of whom are important figures in the history of computing. In this way, she gestured toward two of her interests: the devaluation and erasure of women in tech history and the relationship between computing and weaving. The punch card, after all, was used for a loom before it was used for computers. Juliana Wisdom began her project trying to trace the women who had worked on the intricate, lavish porcelain made by the Sèvres manufactory, significant examples of which belong to The Huntington’s art collections. Evidence of these women, who worked in 18th- and 19th- century France, proved hard to come by, even as she pored over the sources held in The Huntington Library. She did know, however, that Marie Antoinette and Madame Pompadour, royal women of means, had patronized the Sèvres manufactory, and as the project continued, class distinctions between the women in Revolutionary France became increasingly of interest, as did unrest in the colonies. The paintings on vessels Wisdom displays in “COLLECTION/S”—all made in response to the Sèvres porcelain—acknowledge those class divides. 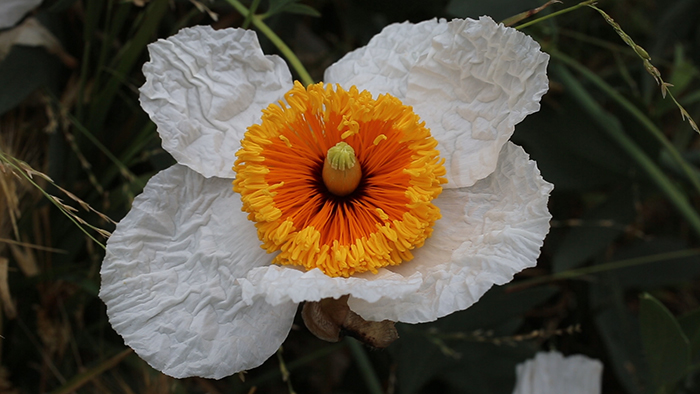 A still from Olivia Chumacero's video When Light Married Water, installed in "COLLECTION/S."

The stories of each project’s development are equally nuanced: Sarita Dougherty and Olivia Chumacero had intended to move back and forth between cultivated and uncultivated gardens at The Huntington but found they were most compelled by an uncultivated area where California native plants grow. All of their work in the exhibition explores that garden, a part of the grounds not yet opened to the public. In certain cases, such as the installation of poet-artist-performer Jheanelle Garriques’ work, the negotiations and inspirations that informed the process will be readily available even to viewers unfamiliar with any backstory. Garrique hosted five writing salons at The Huntington and spent time in the Library, researching the letters of Elizabeth Montagu (1718–1800), who hosted salons and encouraged female writers. Some of Montagu’s letters will appear in the exhibition, along with writings from Garrique’s salons. A large photograph from the performance Garriques and collaborators staged in The Huntington’s Rothenberg Hall serves as a design element in the exhibition. The process and product are indistinguishable, which also aligned with Montagu’s relationship-focused approach. “Despite all the narratives crafted and created in her coterie, what Montagu sought to save were the relationships—the connections,” says Garriques. “It was all at once productive and incredibly nurturing.”

A new video by Emily Lacy gives a peek into each of the 2017 /five projects:

WCCW/five: Meet the Artists from The Huntington on Vimeo.

The /five initiative is made possible by a generous gift from The Cheng Family Foundation. Additional funding for the second year of /five has been provided by a grant from the Pasadena Art Alliance. Catherine G. Wagley is a freelance journalist who writes about art and visual culture in Los Angeles. Emily Lacy is a folk and electronic sound artist working in music, film, and other media.