In Celebration of Trees 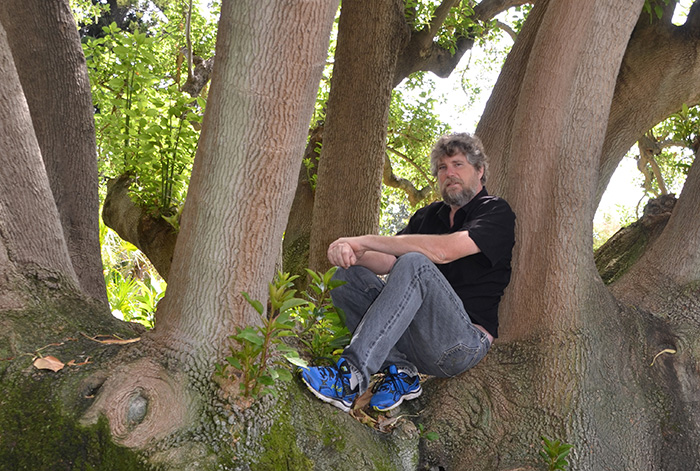 With more than 3,100 accessioned trees in the Botanical collections, picking out a single favorite is no easy task. The Huntington's resident "tree guy," Tim Thibault, shared some of his own top picks with Verso. Heading up the list: The ombú tree (Phytolacca dioica), an Argentinean native planted by the Lily Ponds in 1912. Photos by Lisa Blackburn.

Imagine walking into your favorite garden or park and finding it completely bereft of trees. Horrifying thought, isn't it? No venerable oaks with their inviting shade, no flowering magnolias with their haunting scent, no stately pines or deodars alive with the sound of bird song. Trees are so integral to the beauty of any landscape, and so important to the health of the environment, that the imagination reels at the very idea of living without them.

All the more reason to celebrate them—on Arbor Day and all year round. 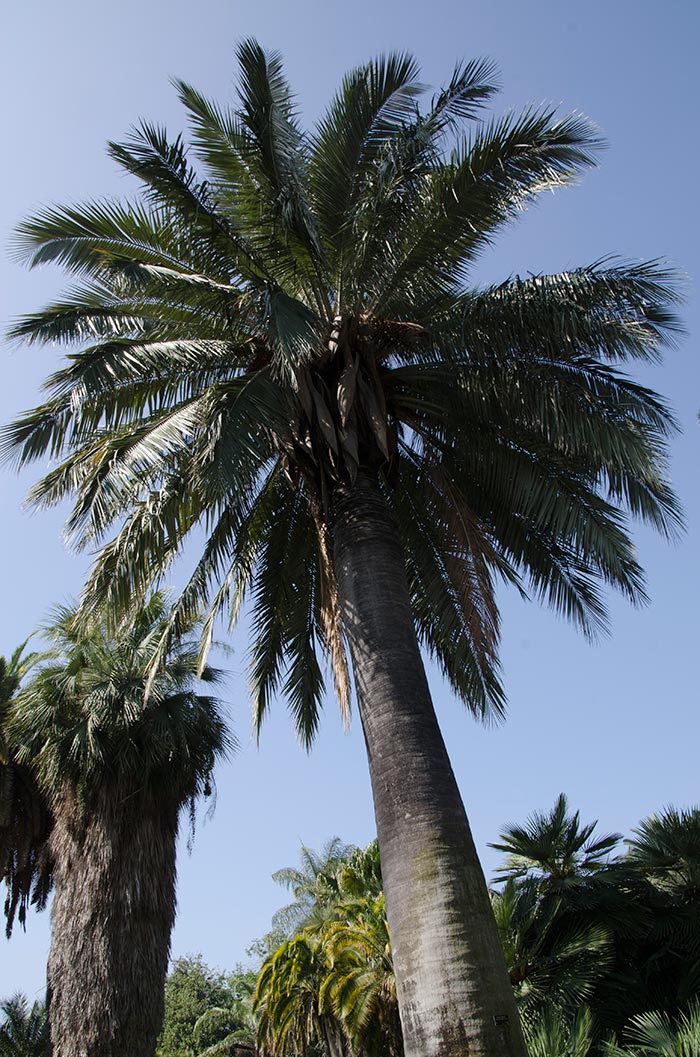 Some of the trees in the gardens are extremely rare, including the Chilean wine palm (Jubea chilensis), an endangered species.

Ask people to name their favorite trees at The Huntington, and the answers are likely to be as varied as the trees themselves. Some might cite the Japanese Garden's Ginkgo biloba grove for its spectacular display of fall color. For others, the Desert Garden's floss silk tree (Ceiba speciosa) might hold a special fascination, with its prickle-studded trunk, gorgeous pink flowers, and large seed pods filled with fluffy fiber. Take a tour with any of our garden docents and you'll certainly hear of their regard for the Palm Garden's endangered Chilean wine palm (Jubea chilensis), which has been harvested to near extinction in its native habitat for the sugary sap that is fermented into wine.

We asked our resident "tree guy," Tim Thibault, to single out some of his own personal favorites. As curator of woody plants at The Huntington, he knows the trees in the Botanical Gardens more intimately than anyone else. He notes that there are currently more than 3,100 accessioned trees on the property—that is, trees that are documented and considered part of the collections. They represent a healthy diversity of 93 families, 313 genera, and 812 species.

Two stand-outs at the top of Thibault's list are the ombú tree (Phytolacca dioica) by the Lily Ponds—an Argentinean native with a thick, water storing trunk—and the Montezuma cypress (Taxodium mucronatum) in the Rose Garden, a Mexican beauty known for its lacy foliage and gracefully weeping boughs. "Both trace their roots to 1912, just after the house was built and before the Huntingtons settled in," he explains. "The Phytolacca shows the early collaboration with the USDA on plant exploration and importation. The seeds came from the botanic garden in Buenos Aires. The Taxodium represents early fieldwork by William Hertrich, Huntington's superintendent. He collected the seeds himself in Chapultepec Park in Mexico City." Additional specimens of the Montezuma cypress can be seen below the Lily Ponds, where welcoming benches make them a favorite resting place. 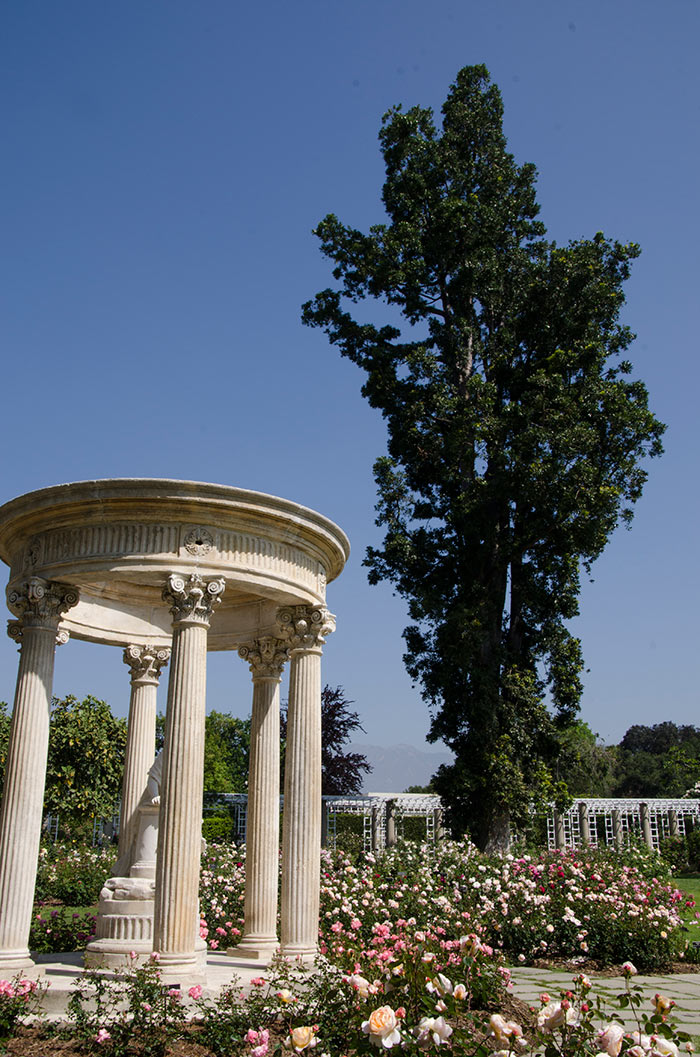 Transplanted in 1908 to make way for construction of the Huntington mansion, the towering Queensland kauri (Agathis robusta) has thrived in the Rose Garden ever since.

Another tree in the Rose Garden deserves special mention, says Thibault: The tall Queensland kauri (Agathis robusta), native to eastern Australia—a specimen that was growing on the estate when Huntington purchased the property in 1903. "Hertrich estimated the plant to be from 1890," says Thibault. "It was moved in 1908 during construction of the house. The tree was reportedly 40 feet tall at the time, and moving it must have been like raising the pyramids, given the technology of the day." Thibault notes that the tree, when re-measured two years ago, had reached a height of 121 feet—a transplant success story that he hopes will bode well for other tree relocations currently being undertaken for the new Education and Visitor Center.

Some of the most historic trees on the property reflect the early agricultural roots of the estate. Among these are the groves of avocados that still exist in the area northeast of the Mausoleum. "Henry Huntington began collecting avocados in 1907, after tasting one in a salad at a luncheon," says Thibault. "We recently did genotyping with a lab at the University of California, Riverside, and found that we have 27 unique genotypes that are closer to wild types—in other words, avocados that are genetically significant. Thank you, Henry!" 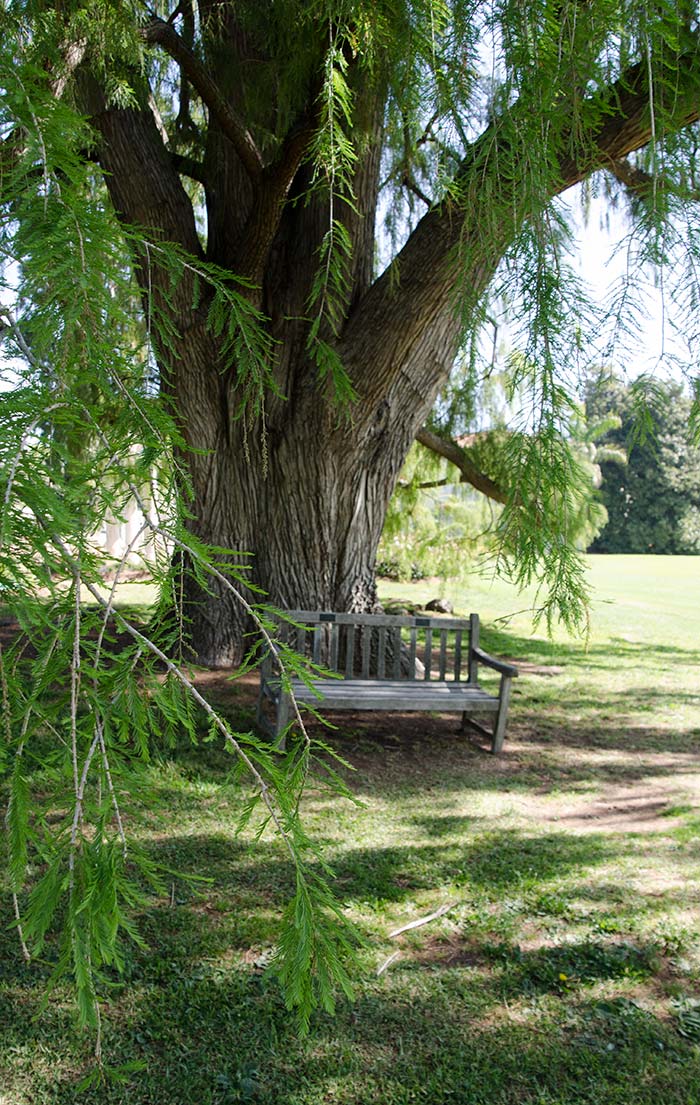 The Montezuma cypress (Taxodium mucronatum), planted from seed in 1912, has been a visitor favorite for generations.

Keeping all these trees healthy—the historic ones, the genetically significant specimens, and those that are just downright beautiful—is an important part of The Huntington's mission, and of Thibault's own work. And that brings us to the polyphagous shot-hole borer, or PSHB for short. A species of ambrosia beetle, PSHB is one of several deadly pests and diseases that have been attacking trees across the San Gabriel Valley region. Many of the types of trees affected by this pest—including avocados, sycamores, maples, and oaks—are represented in The Huntington’s collections, so the institution is playing a key role in research and response. Thibault collaborated with scientists from U.C. Riverside to coauthor a paper on the ambrosia beetle published in the July 2013 issue of the journal Plant Disease. Last August, The Huntington hosted a symposium for experts in the fields of arboriculture, entomology, plant pathology, and urban forestry, aimed at sharing the latest science and cultivating collaborations to address the growing threat. And in February, The Huntington and the California Avocado Commission co-sponsored a trip to Vietnam, source of the local strain of PSHB, where new insights were gained into the basic biology of the pest and the destructive fungus it carries. A number of potential biocontrol agents were identified, says Thibault, which may someday help stop this deadly pest.

And that's good news to everyone who loves trees. 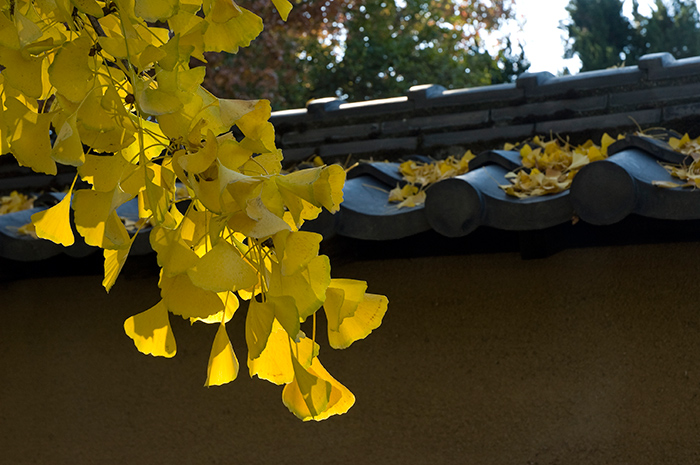 The golden autumn foliage of the Ginkgo biloba makes these trees in the Zen Garden a seasonal favorite.

Visit the Arbor Day Foundation website for ideas on how you can to celebrate trees—at home, in your community, and beyond.

Here's the response from David MacLaren, our curator of Asian gardens, about the bamboo you mentioned at the bottom of the Japanese Garden. He identified it as Black Bamboo (Phyllostacys nigra punctata):

"Bamboo is a member of the grass family and as such occasionally goes to seed. Each different bamboo has its own life cycle which can be upwards of 50 to 80 years. When it goes to seed (which can't be prevented) either the entire stand dies completely, or it dies back to the ground and then sprouts back up again. This is what is happening to that particular stand of bamboo."

David says he's also keeping a close eye on the bamboo you mentioned in the Chinese Garden. It's being given some extra watering and fertilizing, and David believes it will perk up again. That's also black bamboo, but a different type. He doesn't think it will go to seed.

Thanks for the question! It was a great opportunity for ME to learn something new about bamboo.

Thanks for your comment. Believe it or not, bamboo is technically a member of the grass family, so it doesn't fall under Tim Thibault's area of care with trees. But I've passed your comment along to our curator of Asian gardens, who oversees both the areas you mentioned. I'll let you know what I find out.

Keep hugging that Montezuma cypress! It's one of my personal favorites, too.

Hi Diana -- Yes, Tim Thibault found the tree you were describing on the north side of the building. He's happy to report that a number of steps have recently been taken to improve its long-term health. Pooling of irrigation runoff in that area had been an issue, so two drains were added to keep the area drier. Also, to prevent compacting of soil around the tree, bollards (barrier posts) were placed along the service road that passes right behind the tree, which will prevent vehicles from driving or parking on the soil. These measures are not only keeping the tree on drier ground but they were also highlighted as a positive example of intervention during a recent tree care seminar organized by the International Society of Arboriculture. So Tim is encouraged about the oak's prognosis. Regarding the roses, he notes that the sprinklers in that area are ground-level, not overhead types, which is better for both the tree and the shrubs. But he has shared your comments with the Rose Garden curator so that if any future concerns arise they can be addressed collaboratively.

I hope that helps! Many thanks for your comment.
Lisa

Walking from the Zen garden, and the Bonzai gardens down the winding path through the Oak grove towards the bottom before exiting the Japanese gardens is a large stand of Bamboo trees, the bamboo forest I love to call it. All the trees on the right side seem blighted! Have died off! .... I noticed at the top of the property in the Chinese gardens looking off in the distance, the long stand of Bamboo trees planted there a decade ago, also are dying turning yellow. What's happening? In the article above, the Cypress tree in the rose garden is my favorite - I hug it every time I come to the Huntington!
God bless you all.

Glad you enjoyed it! Perhaps a guided tour could be arranged for your next visit.

Thank you, Diana. We'll definitely pass your comment along!

Thanks, I now realize that I'm directionally impaired and the oak is north of the Scott Gallery, not south!

Great article for this Arbor Day! Can't wait for our next visit to the Huntington to see some of the trees mentioned here (and many more)! Thank you, Ms. Blackburn, for such an interesting blog post!

I'm very concerned about a Coast Live Oak immediately south of the Scott Gallery on the east side of the path, presently underplanted with Iceberg roses. It's clearly dying of oak root fungus, probably promoted by the overhead watering of the roses, which are a poor underplanting for Coast Live Oaks and need water year round when the oak shouldn't be watered. It would be wonderful if Mr. Thibault could intervene to see if it can be saved by removing the inappropriate plantings and stopping any watering of the oak.