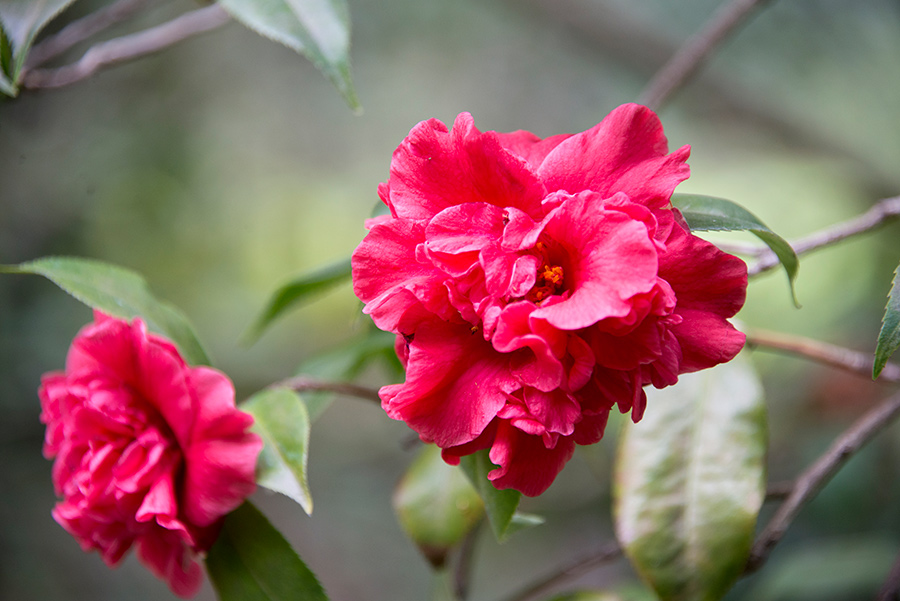 Recent rains were welcome relief for Camellia japonica ‘Are-Jishi’, which has red-pink flowers in a peony form. Photo by Kate Lain.

The eastern side of the North Vista contains some of The Huntington’s oldest and most precious cultivars of camellia. William Hertrich, Henry Huntington’s superintendent of the gardens from 1903 to 1948, had a passion for the flowering plant and took advantage of San Marino’s mild winter temperatures to plant many varieties, from the bright white Camellia japonica ‘Alba Plena’ to the reddish pink C. reticulata ‘Captain Rawes’.

But mild temperatures are not enough to keep camellias looking their best. They also need consistent moisture. Recent rains have been a huge boon to the plants, especially after six years of drought.

“We hope this year’s rains signal a return to more regular rainfall,” says David MacLaren, The Huntington’s curator of Asian gardens. “But we can’t be sure.”

MacLaren says running overhead sprinklers for several hours results in water reaching roots no more than four to six inches deep. This provides some relief in dry times, but it doesn’t achieve the deep soaking that occurs with regular, consistent rains. Sustained rains, like many of the ones that have fallen so far this year, saturate the soil, giving camellias the moisture they’re craving while at the same time helping to remove harmful salts. (Rain also washes the plants’ leaves, warding off pests.) 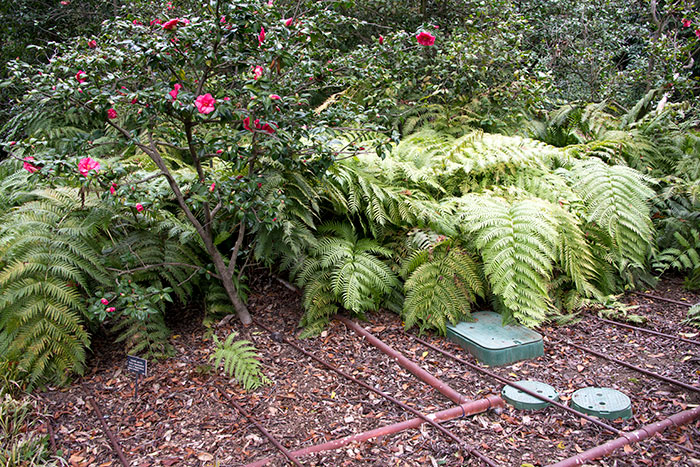 Drip tubes crisscross a planting area on the eastern side of the North Vista, helping camellias like this C. japonica ‘Rudy's Magnoliaeflora’ to battle drought. Photo by Kate Lain.

So a few years ago, MacLaren worked with his team and the irrigation crew to install approximately 20 miles of drip irrigation tubing in parallel lines under the camellias. The drip tubes release small amounts of water over time, allowing the moisture to reach deeper into the soil. Drip irrigation is also unaffected by local regulations that limit the duration of watering. The Huntington can run the drip irrigation for an extended period, provided the overall water-use stays below required levels.

Prolonged drought had left the camellias with a lackluster appearance and made them increasingly prone to plant pests, such as spider mites and the sometimes-fatal polyphagous shot hole borer. Several camellias had already succumbed to the deadly insect.

To date, The Huntington has installed approximately 41 miles of drip irrigation tubing in the gardens. MacLaren estimates another five miles of tubing is required to cover the entire camellia collection.

Another issue facing camellias is a loss of tree canopy. In Hertrich’s day, large and leafy coast live oaks created shady cover for the young plants. As the camellias grew, so did the oaks, some of whose canopies spanned 50 feet or more.

Then, in 2011, a major windstorm struck, knocking down more than 400 trees across the property, including several massive oaks. 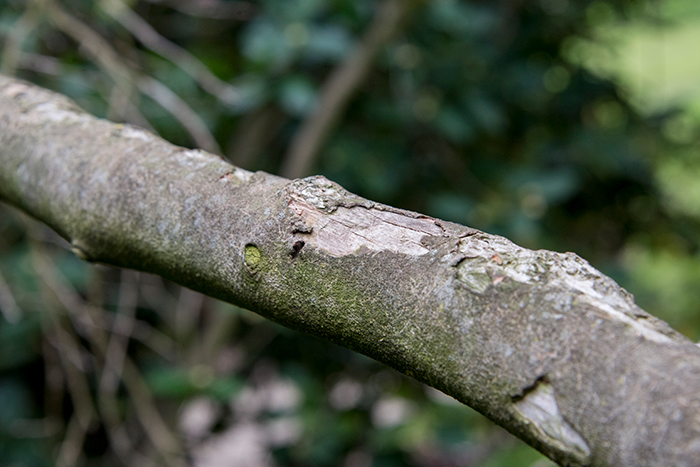 With the loss of several large oaks that had provided shade, the branches of C. japonica ‘Gigantea’ became burned by the sun. Photo by Kate Lain.

Some camellias can withstand direct sunlight, especially the sasanqua species that are native to Japan. But even they prefer some relief from afternoon sun. Suddenly, there were large gaps in the tree canopy. Portions of the trunks and major branches on some of the camellias suffered severe sunburn, leading to many of their branches dying. MacLaren wanted to provide shade for the plants, but waiting for a new grove of trees to reach mature size could take decades.

He devised a plan. Dozens of camphor and Virginia oak trees were planted near the exposed camellias. Instead of planting these fast-growing trees fully in the ground, he left them in their wooden boxes, removed only the bottom panel, and then submerged the box halfway in the ground. If any of the trees grew particularly well, he could remove the box, mound soil around the base, and allow it to grow. Otherwise, he would selectively remove these sacrificial trees as other more valuable specimens created the needed canopy.

So, has the plan worked? As hoped, drip irrigation is reaching much deeper into the soil. Meanwhile, some of the camphor and Virginia oaks have grown a good 10 feet or more since they were planted, creating some much-needed shade.

And are the camellias doing any better? According to MacLaren, the answer is a qualified yes.

Even before this year’s rains, MacLaren noticed some positive signs. Normally, camellias set buds in the fall and don’t show new growth until after the bloom. But this year, gardening staff started seeing a flush of new growth much earlier than usual. And the recent rains have only helped.

“Camellias are slow to show signs of damage or improvement,” says MacLaren. “Still, the fact that the plants are showing new growth is excellent.” 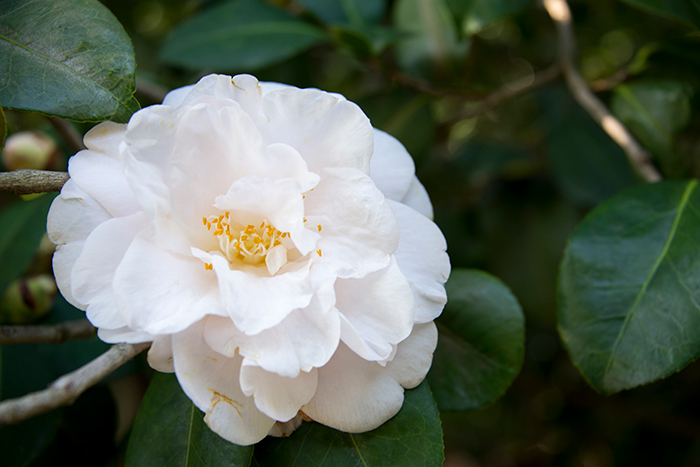 Like many other camellias, C. japonica ‘Julia France’ appreciates the dappled sunlight of a tree canopy. Photo by Kate Lain.

February is one of the best months for observing camellias in bloom. On Feb. 11 and 12, hundreds of gorgeous blooms will compete for top honors at The Huntington’s 45th annual Camellia Show. View the exhibits, shop for camellia plants to grow at home, and get some expert tips on the care and cultivation of camellias. Brody Botanical Center. General admission.

I love me some botanical articles. Please keep them coming. Love camellias!