This photograph and illustration depict the same scene—black soldiers undergoing punishment on the "wooden horse." The illustration comes from Frank Leslie's Illustrated Newspaper (Dec. 10, 1884), and the illustrator assures that his "drawing is from life...and brings the truth vividly to the spectator's mind." The author of the corresponding article uses the image to support the claim that the "obtuse sensibilities" of "negro troops" saves them from the inherent shame in punishment, and controlling them required far more force than what was needed to discipline white soldiers. Meanwhile the photograph, which comes from The Huntington's James E. Taylor collection of Civil War images, captures just two soldiers straddling the suspended beam with stoic faces (this in contrast to the newspaper's illustration, which shows many more soldiers, some playing cards while others nap). 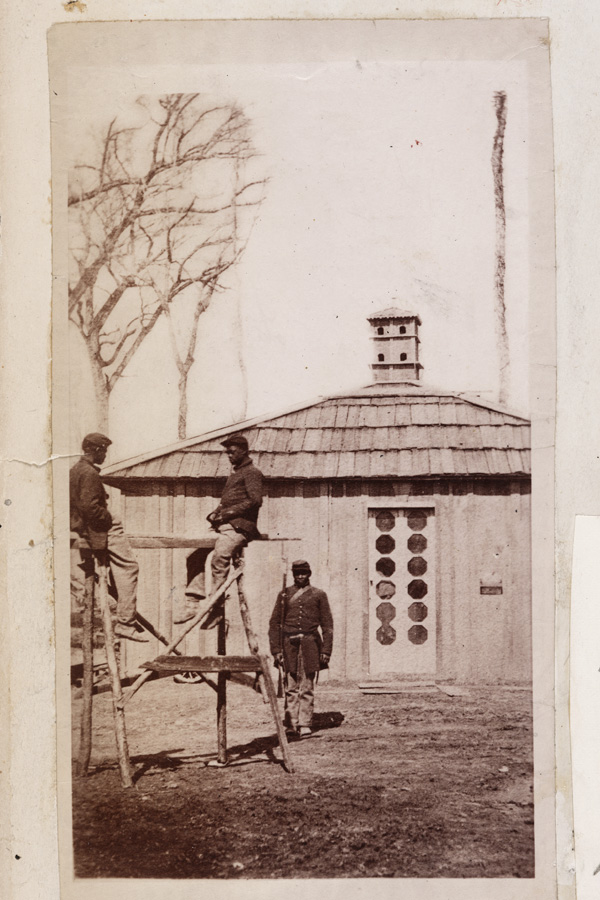 Juxtaposing these two images certainly exposes racial stereotypes, and also reminds us that in the 1860s photography was still in its infant stage. But photography matured during the Civil War from a scientific tool into an irreplaceable graphic medium. Men like Mathew Brady, Alexander Gardner, and Andrew J. Russell fathered photojournalism, while ambrotype, daguerreotype, and tintypes brought families to the battlefield in the pockets of fathers, sons, husbands, and brothers. However, due to limitations in technology, editors could not easily incorporate photographs into print media, and so newspapers and magazines relied on illustrators to translate scenes into a form that could be mass-produced. This translation allowed for some creative adjustments on the part of the illustrators, apparent in the discrepancies between these two images. 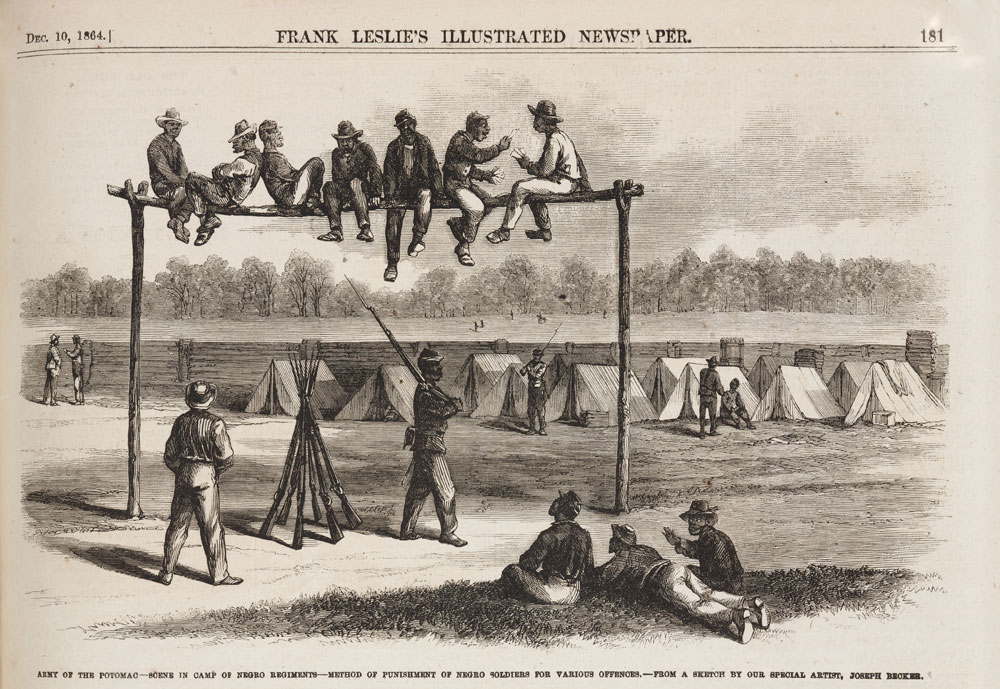 The Huntington's James E. Taylor collection captures this translation process. Taylor, a Civil War veteran, also illustrated for Leslie's during the last half of the war. To inform his illustrations, Taylor collected thousands of images while traveling with the Union Army. After the war, he became a painter of Civil War battle scenes.

The Huntington is planning a Civil War exhibition for the fall of 2012. Drawing primarily from its unparalleled photographic, print, and ephemera collections, "A Strange and Fearful Interest" will be a visual exploration of the ways in which death and mourning in the Civil War have informed American memory. The exhibition will also present an opportunity for The Huntington to share rare and never-before-seen Civil War images.

Thank you, Steven, for this interesting item. But skepticism about the the eyewitness "authenticity" of the wood engraving--or, more accurately, the sketch on which the engraving was based--may be misplaced. Taylor, along with other Civil War special artists, often combined on-the-spot observation with photographic references. That said, while many photos were translated into engravings, they were usually cited as such in the accompanying captions; meanwhile, the sketch-artist images offered what photographs couldn't: activity, emotion, action, and a narrative. The stiffness and stoicism of the soldiers in the photograph may imply more the limitations of photographic technology at the time--with slow exposure times requiring frozen poses--than the accurate capture of an event. The discrepancy between photo and engraving in this instance may have more to do with what photography couldn't show at the time than the fallibility (of which, to be sure, there were many) of news illustrations.

I look forward to the "A Strange and Fearful Interest" exhibit!

I have a unique illustration by James E Taylor, that is a family heirloom. Currently it is being displayed by the Missouri Civil War museum, listed as "Broken Shackles".

As per my original copy and title, the storyline by Mr. Taylor does not fit this title as Broken Shackles. I will share the storyline with the listed two titles on my illustration, with interested parties.