When many parts of the country are blanketed by snow, the winter landscape at The Huntington is covered with camellias. The Camellia Collection includes nearly 80 different species—sasanqua, japonica, reticulata, hiemalis, vernalis, and tunghinensis, to name just a few—and some 1,200 different varieties. Many of them are at the peak of their bloom right now, putting on a dazzling display in the North Vista, the Japanese Garden, and the Garden of Flowing Fragrance. 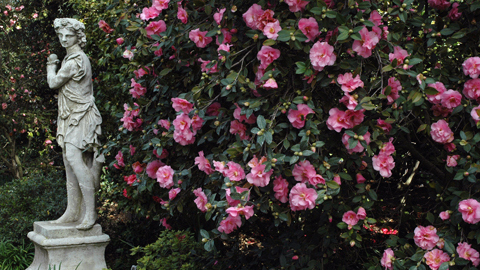 This weekend, the display will be even more outstanding as The Huntington hosts the 39th annual Camellia Show and Sale presented by the Southern California Camellia Society. Hours for the event are from 1 to 4:30 p.m. on Saturday, Feb. 12 (following the morning judging), and from 10:30 a.m. to 4:30 p.m. on Sunday, Feb. 13. Camellias are native to China and Japan and made their way to the Western world in the 18th century. The descendents of some of the earliest camellias to arrive in England are represented here, along with many species camellias and modern hybrids. "What makes this collection stand out is not only its size and completeness, but also the number of rare and historic cultivars it contains," says David MacLaren, Curator of Asian Gardens at The Huntington. According to MacLaren, the most historic individual plant in the collection is C. japonica 'California,' which is believed to be the oldest surviving camellia on record in Southern California. This specimen arrived on a tramp steamer as an unnamed seedling in 1888 and had two previous homes before being donated to The Huntington in 2003. Look for it, with its large rose-red flowers, on the east side of the road between the Library and the North Vista fountain. 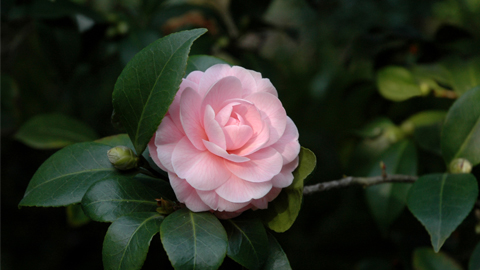 The collection continues to grow under MacLaren's care. New plantings of reticulata camellias—first introduced into the West from China's Yunnan Province in 1948—can be seen in and around the Garden of Flowing Fragrance, a tribute to their native roots and to the role of the flower in Chinese culture. And a small "plantation" of tea camellias, C. sinensis, has been planted on a slope alongside the Japanese Garden stream. The tender young leaves of the C. sinensis are the source of all black, oolong and green teas. And what could be more perfect, after a stroll through the camellias on a winter's day, than to sit down and enjoy a hot cup of tea? Chinese tea and light refreshments are available during weekend hours in the Garden of Flowing Fragrance. An English-style afternoon tea is available daily (except Tuesdays) in the Rose Garden Tea Room, by reservation. Lisa Blackburn is communications coordinator at The Huntington. Photos: Camellia 'Brigadoon' in the North Vista; Camellia japonica 'Pink Perfection.' Photos by Lisa Blackburn. This post has been adapted from an article that originally appeared in The Huntington's Calendar (Jan./Feb. 2009). Postscript: Fans of 'Pink Perfection,' pictured above, will be saddened to note that this historic shrub succumbed to oak root fungus and was removed from the garden this week. It had been growing here since before 1903, when Henry Huntington purchased the estate.  But there's good news: cuttings were taken from the plant for propagation, so camellia lovers will be able to enjoy its beautiful blooms again some day in the future.

Hi, Susan. We don't have any plants available for mail order here at The Huntington, but we do have some on-site plant sales that you might want to check out if you are in the area. We host an annual Camellia Show and Sale each year (the next one will be held Feb. 14-15, 2015), and sometimes there are camellia plants available at our Fall and Spring Plant Sales (camellias more likely to be found at the spring iteration; check online calendar for dates).

I am looking for three sasanqua that are espalier. I love perfect pink. Can you ship the plants and how large are your plants?