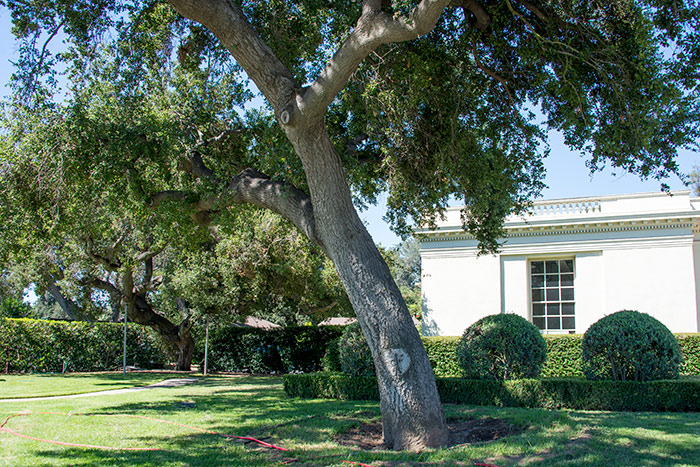 Growth had slowed on this coast live oak (Quercus agrifolia) near the Boone Gallery. Photo by Kate Lain.

Huntington arborist Daniel Goyette first investigated the two-story-high coast live oak (Quercus agrifolia) near the Boone Gallery to address concerns that its growth had slowed. Soil was built up around one side of it, and it appeared to be listing. On closer inspection, the tree doctor determined that the tree was slowly suffocating and required a root collar excavation. Say what?

Over time, soil, leaf litter, and other natural materials can accumulate around the base of a tree—literally cutting off the tree’s ability to breathe. In this case, the problem was exacerbated by gopher activity, which had created a mound of soil on one side. The additional soil also gave the impression that the tree was leaning. 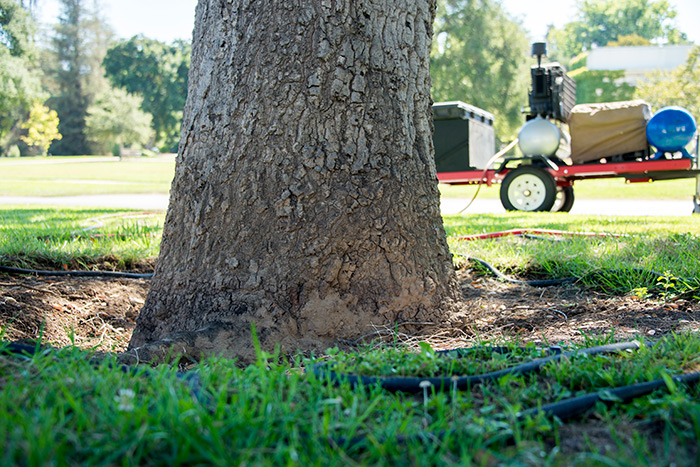 Over time, soil accumulates around a tree’s trunk, cutting off the air supply. Help is on the way, in the form of an air spade attached to an air compressor, seen here in the background. Photo by Kate Lain.

“For a tree to breathe, it needs to have its root collar unencumbered and exposed,” says Goyette. “Especially with native oaks, you don’t want to put soil or mulch up against them.”

In a healthy, mature tree, large buttress roots rise partway out of the ground, creating root flare—where the root meets the ground and flares out. Goyette couldn’t even see the buttress roots. So he brought out one of his favorite tree-care tools: the air spade.

Attached to a compressor, the spade shoots 110 pounds per square inch of air through a metal tube and nozzle. The blast of air is just powerful enough to dislodge soil without damaging delicate roots. 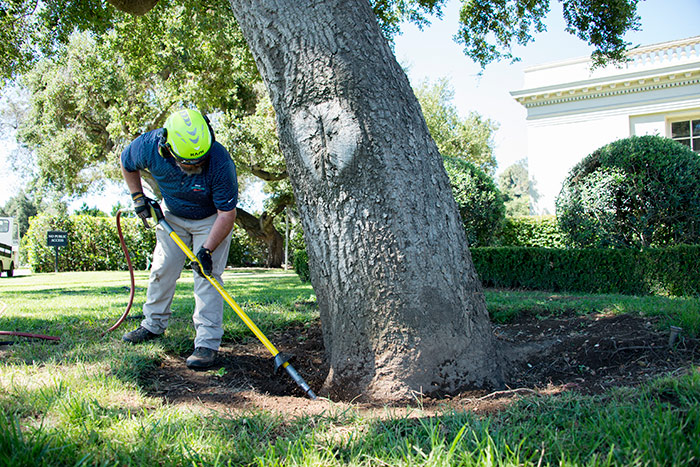 Before using the air spade, Goyette takes a few precautions. He turns a soaker hose on overnight so that the soil around the root flare won’t create a dust storm during excavation. Then he dons ear plugs and protective glasses. A loud whirring noise fills the air as Goyette points the nozzle at the tree’s base. He angles the nozzle to nudge loose the soil around small feeder roots, and then he works his way around the tree.

Several hours of excavation were enough to finally reveal the start of the buttress roots. They’ve been completely covered with soil, subjecting the tree to ongoing stress. Uncovering them may require removing about a foot or more of soil from the tree’s trunk, says Goyette. Once he uncovers the roots, he can make sure nothing else is negatively impacting the tree. “I’m hoping that, by next spring, we’ll see a whole new flush of growth,” he says. 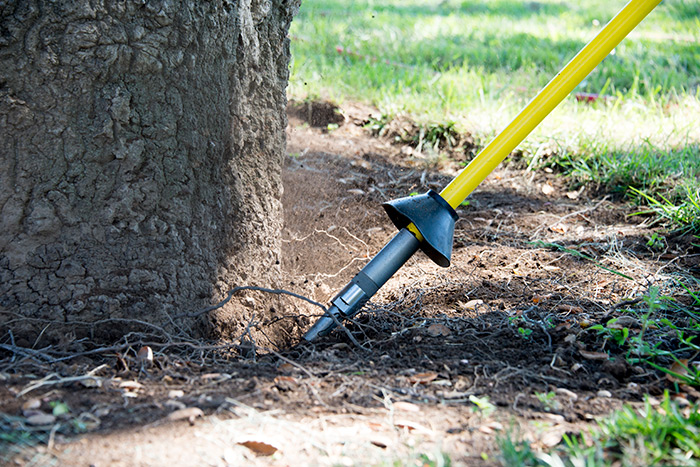 A compressor supplies a powerful jet of air to the nozzle. Photo by Kate Lain.

Wind and the raking of leaves off nearby paths eventually causes soil build-up around trees. “We’re fortunate to be a botanical garden that’s close to 100 years old,” says Goyette. “But we need to keep up with this sort of maintenance.”

Considering that The Huntington possesses roughly 10,000 trees, many of which date to its founding, Goyette clearly has his work cut out for him. But when you stand under the dense canopy of the oak, its shade cutting the temperature by 10 or more degrees, you’re grateful that he’s on the job. 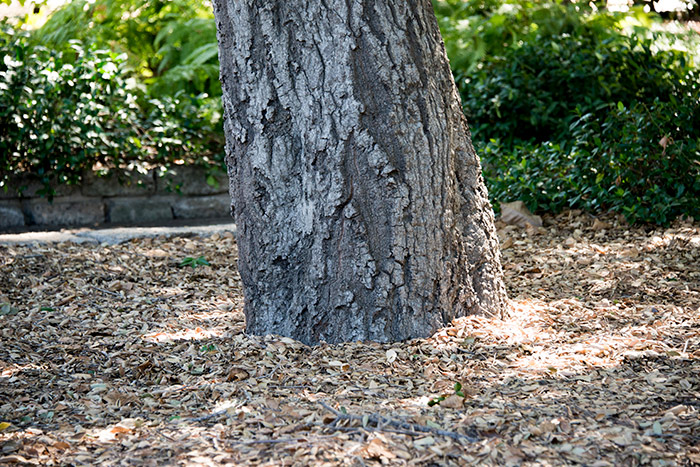 Another coast live oak requires treatment. The base of a tree trunk should flare. When it looks like a straight telephone pole, there’s generally a problem. (Homeowners sometimes create a similar issue by planting a tree too deep.) Photo by Kate Lain.

Strengthening Bonds with Mexico Through Cryopreservation
Aug. 7, 2019 by Usha Lee McFarling
0 Comment(s)
The Huntington has taken a lead role in recent years in the cutting-edge field of plant cryopreservation ...
More

Rescuing a Hive of Bees
Jul. 17, 2019 by Usha Lee McFarling
0 Comment(s)
Bees are no strangers to The Huntington. There are numerous hives in trees on the property that cause few problems  ...
More

Thank you for this fascinating article. I am currently trying to save a large redwood in my front yard. It does sprout some green around its base - this a good sign? Pasadena water restrictions make deep watering problematic. I'll try this technique - minus the air hose and see if it helps.

Another response from Huntington arborist Daniel Goyette: “It’s hard for me to say without seeing the tree. Having said that, redwoods are quite happy living in forests with thick layers of needles around their trunks. The problem may not be so much an impacted root crown as the ongoing drought. The trick is to give trees the deep watering they would normally receive from consistent rains. Even in areas with water restrictions, you can usually use soaker hoses or drip tubes. And it’s always a great idea to consult a local arborist.”

Fascinating. Would love to read more posts about arborists and what they do at the H.

I have been an arborist for years, and this is a great article, and a great blog for that matter. I have owned a tree service for years and I agree with your mulching method as well. Great insight. Glad I bumped into this.

Now the soil level around the flare is lower than some feet out. What maintenance is recommended the so the soil from the higher grade doesn't migrate towards the tree? What about mulch? It is an interesting article about a professional technique that wouldn't usually be available to the home owner. However, if the homeowner is trying to extrapolate info to use in the home property, I believe some additional information would be helpful.

Thanks for your question. Huntington arborist Daniel Goyette replies:

Once you excavate, the soil will slope towards the trunk. That’s not a good idea for two reasons. For one, it’s a tripping hazard. Secondly, trees don’t like water pooling around their trunks. So it’s best to grade the soil, evening it out for several feet in every direction. Yes, you can add mulch, but keep it at least two feet away from the trunk. For more detailed advice, please consult a certified arborist.

And again, from Daniel Goyette: “Thanks for your message. You’re right. There are literally hundreds of coast live oaks in this situation on the property and I can’t get to them all immediately. I assess them on an individual basis, looking for ones where impacted crowns are having noticeable effects, such as dieback, or the presence of plant pathogens. Most of our trees are also suffering from the ongoing drought, which probably led to the demise of the tree you mention.”

It's not clear from the article whether this same treatment will be afforded the Huntington's other Coast Live Oaks. Immediately south of this tree is one just as old which has died completely. It's behind the hedge, in an area where the public does not go, but it's still venerable and should have been better maintained - next to it is another oak that I'm sure would benefit from this treatment. There are plenty of other oaks with build-up around the base, both behind the scenes and out in the public areas.

Does the Huntington plan to do this same thing to its other oaks?