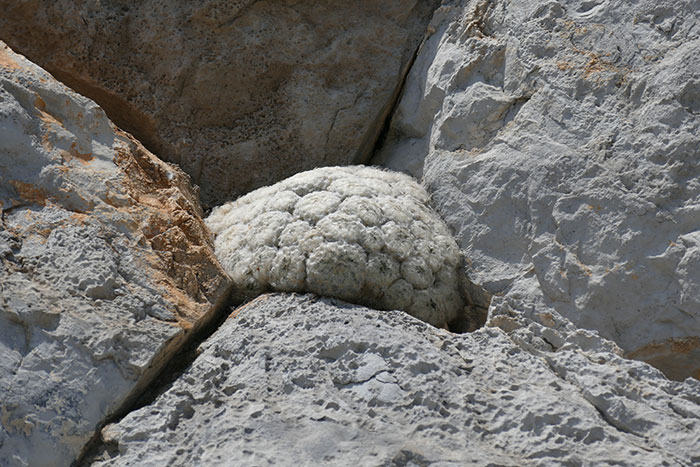 Mammillaria plumosa, nestled where two cracks in a cliff converge in Huasteca Canyon. The canyon is located near Monterrey, Nuevo Leon, Mexico. Photo by John Trager.

As The Huntington’s curator of desert collections, I, along with my staff, care for 2,000 species of succulents, including a vast range of cacti, in the 10-acre Desert Garden, plus thousands more in 20,000 square feet of greenhouse and other nursery space.

Over the years, specimens have come to us from a variety of sources, including other botanical gardens, nurseries, and private collectors. In the early days, when Henry E. Huntington’s superintendent William Hertrich (1878–1966) presided over the gardens, and up until a few decades ago, it was common for plants to be collected during expeditions to their natural habitats. (We still do this, but it’s become more and more rare because of the international restrictions in place meant to protect plant material in their native habitats.) 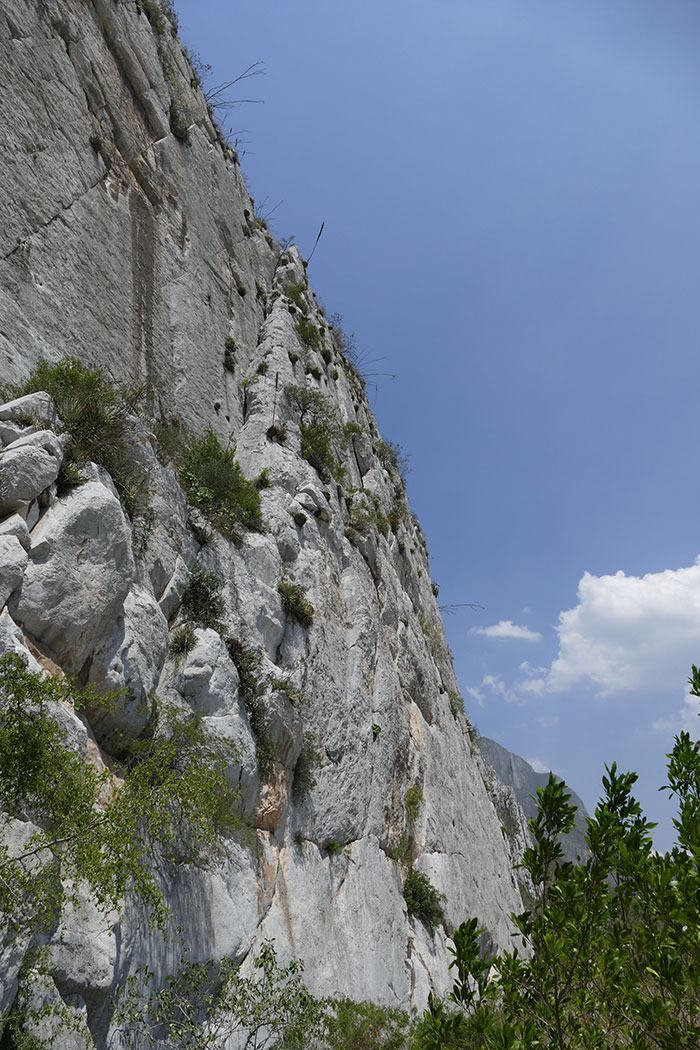 The cliffside habitat of Mammillaria plumosa in Huasteca Canyon. Photo by John Trager.

That’s how we came to grow an example of the feather cactus, Mammillaria plumosa. This plant is on the opposite end of the prickly spectrum from the spiny cactus varieties with which most people are familiar. Its spines are soft and feathery, as its name implies.

As the plant grows, it forms more and more pincushion-like heads. We propagated these plants by separating the heads to root on their own and then shared many specimens with other institutions and private collectors. This is good insurance for us because, if we lose a plant, others can return the favor by sharing one of their propagations to restore the collection. One head we planted about a decade ago has multiplied into dozens of heads, forming a mounding cushion about a foot in diameter. It lives in the Desert Conservatory, where we invite visitors to touch it. 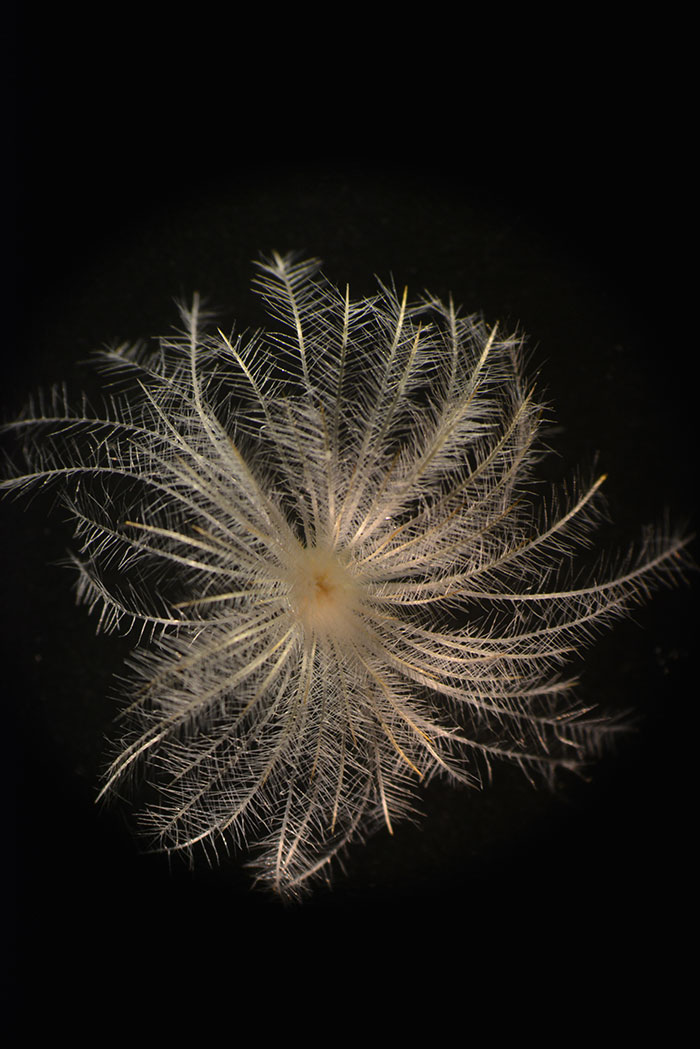 A magnified spine cluster showing the feather-like nature of the spines. Photo by Raquel Folgado.

But, admittedly, as much as we love presenting the plants here at The Huntington, it’s especially rewarding to see them in their natural habitat. So, when the opportunity arises, I’m eager to tear myself away from the greenhouse to do fieldwork. The experience can yield insights into natural variability, associated flora, and ecological relationships with habitat, plants, and animals. It can also help inform our cultivation practices so that we can better grow the plants in our care.

When I set out on a fieldtrip last summer to northern Mexico, I didn’t know what to expect. I was exploring a cliffside in Huasteca Canyon near Monterrey, in the state of Nuevo Leon, when a companion asked me to identify two species of mammillaria. I scanned the cliff and identified Mammillaria formosa and Mammillaria winterae and, lo and behold, nestled where two cracks in the cliff converged, was our old friend, the feather cactus, Mammillaria plumosa.

After returning from Mexico, I was inspired to take a closer look at our Mammillaria plumosa. With the help of The Huntington’s research botanist, Raquel Folgado, we captured some close-ups through a dissecting microscope. Under magnification, the spines radiating from each areole look like ostrich feathers. 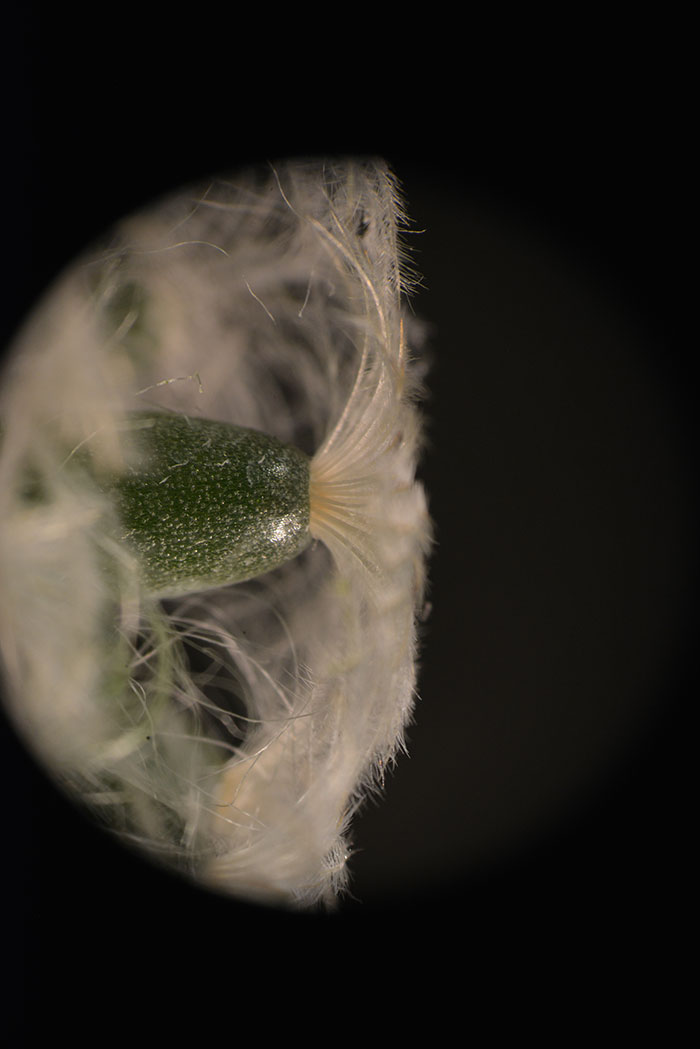 A view from under the spines of Mammillaria plumosa. Photo by Raquel Folgado.

Peering beneath the spines revealed spine clusters that resemble little parasols, held aloft on small conical projections called tubercles. These not only shade the plant from the most intense sunlight, but also diffuse light, rather like a photographer’s diffusing umbrella, shedding light evenly to all sides of the green tubercles—and rendering Mammillaria plumosa one of the most beautiful cacti, in my opinion.

It is also a marvel of efficiency in how it makes best use of available light. Plants that inhabit cliffs can be alternately exposed to blazing sun or dry shade. During a shady Mexican afternoon, the cliff still radiates the warmth of the day, and the plants still have several hours of photosynthetic work to be done before darkness falls.

I have always appreciated Mammillaria plumosa, but seeing it in the wild gave me newfound curiosity and respect for this botanical wonder. Visitors can see—and even touch—this cactus in the Desert Conservatory, which is open every Saturday during public hours.

John N. Trager is The Huntington’s curator of the desert collections.

Wow! This could be one particular of the most useful blogs We've ever arrive across on this subject. Actually Fantastic. I am also a specialist in this topic therefore I can understand your hard work.

Fascinating insight into a plant's life. Thank you.

Wow! What beautiful photo work as well as botany research!

Amazing insight and photography... I can't wait to see and touch it !!