The Auction Catalogs of Martin Folkes 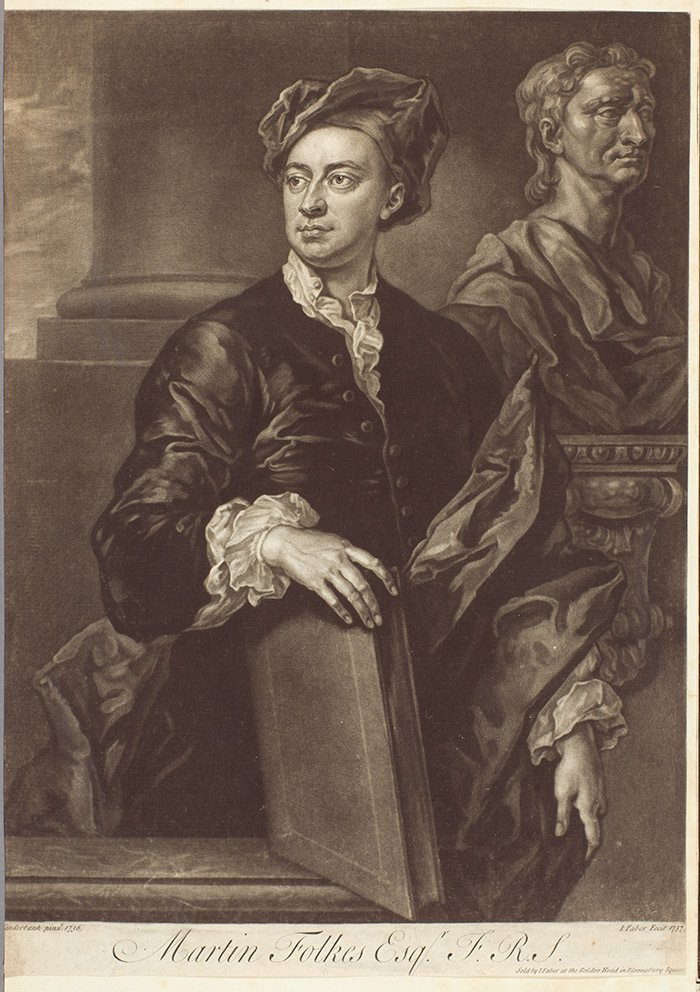 During my time at The Huntington as a short-term fellow, I was researching and writing a biography of Martin Folkes (1690–1754). A protégé of Sir Isaac Newton’s, Folkes was an English antiquary, mathematician, numismatist (coin expert), and astronomer whose unique distinction was his simultaneous presidency of both the Royal Society of London, a renowned scientific academy, and the Society of Antiquaries. He was president of the Royal Society from 1741 to 1753 and president of the Society of Antiquaries from 1750 until his death in 1754.

Folkes was perhaps the best-connected and most versatile natural philosopher and antiquary of his age, an epitome of Enlightenment sociability, yet he is today a surprisingly neglected figure. His was an intellectually vibrant world in which the long shadow of Newton—Folkes’s patron and hero—has tended to obscure those who followed him. 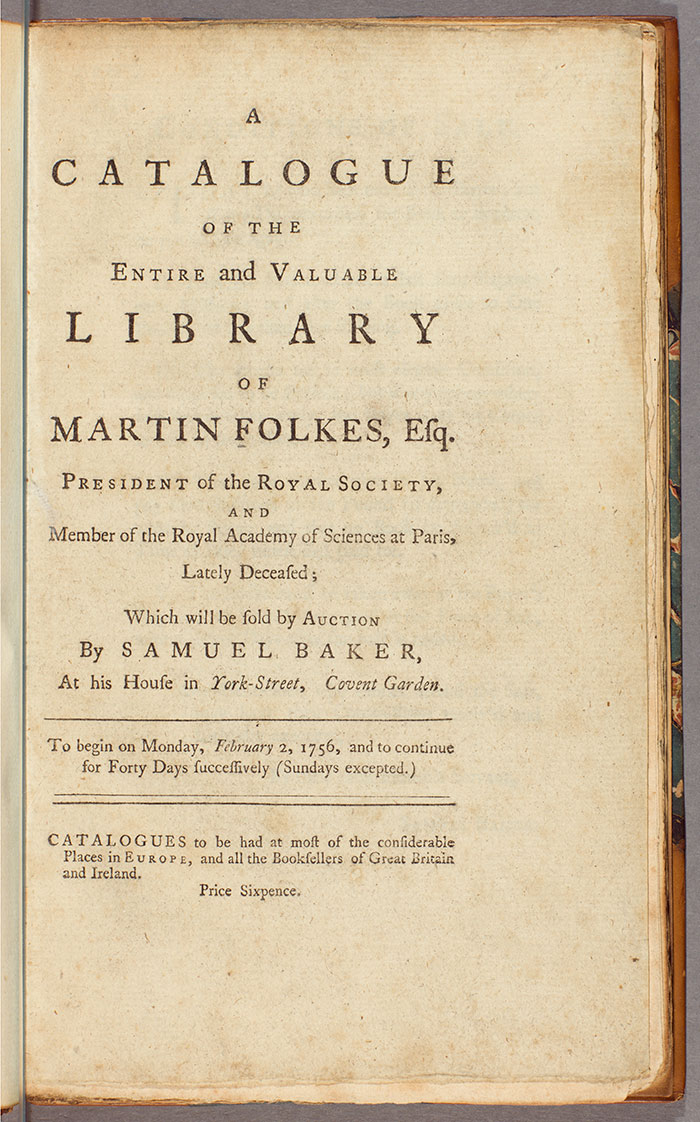 Title page of A Catalogue of the Entire and Valuable Library of Martin Folkes, Esq., 1756. The Huntington Library, Art Collections, and Botanical Gardens.

One way we can rescue this Newtonian scientist and connoisseur from obscurity is to examine the auction catalogs of his vast library and art collections, sold at auction after his death by his daughter Lucretia. Understanding his library is to understand his mind. The Huntington’s magnificent holdings include the original 1756 library auction catalog, helpfully annotated by an attendee, an invaluable resource for a historian of the book.

Not surprisingly, we see several broadly scientific works in Folkes’s collection, including the Philosophical Transactions of the Royal Society and the publications of the French Royal Academy of Sciences, a reflection of his role as Royal Society president.

We also see in the catalog some of Folkes’ own works, particularly his tables on English Silver and Gold Coins (1745), the first numismatic history of English coinage ever written; his exactitude and his and the Royal Society’s analysis of specific gravities of metals made his research a reference point for popularized manuals of weights and measures. 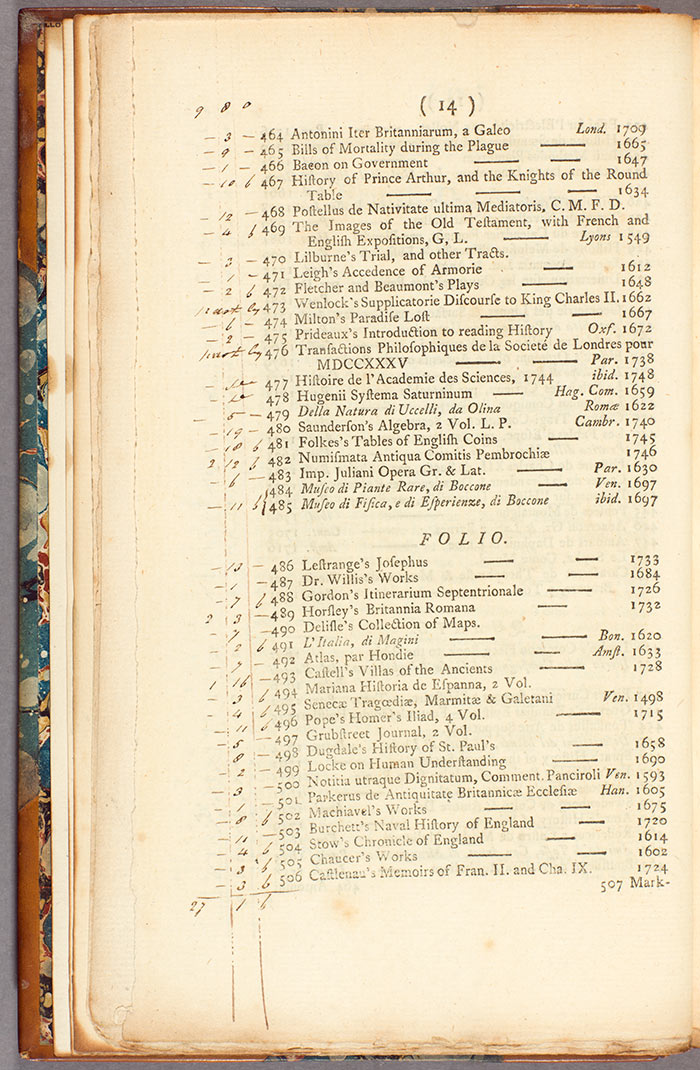 Page 14 of A Catalogue of the Entire and Valuable Library of Martin Folkes, Esq., 1756. The Huntington Library, Art Collections, and Botanical Gardens.

Folkes conferred with several collectors to assemble his volume, including the Earl of Pembroke and the antiquary William Stukeley, best known for his work on Stonehenge. Its publication was a continuation of the Newtonian program in the Royal Society; Newton had served as Warden, then Master of the Mint to reform the English coinage. In the manuscripts section of the Folkes’s auction catalog, we indeed spot “Sir Isaac Newton’s Letter to the Treasury on the Coin in the Year 1717.”

Folkes also was a collector of rare books, art, and—as the first member of the gentry to marry a London actress, one Lucretia Bradshaw—a devotee of the theater. He possessed a first folio of Shakespeare, which sold for £3.3s, a small fortune at the time. 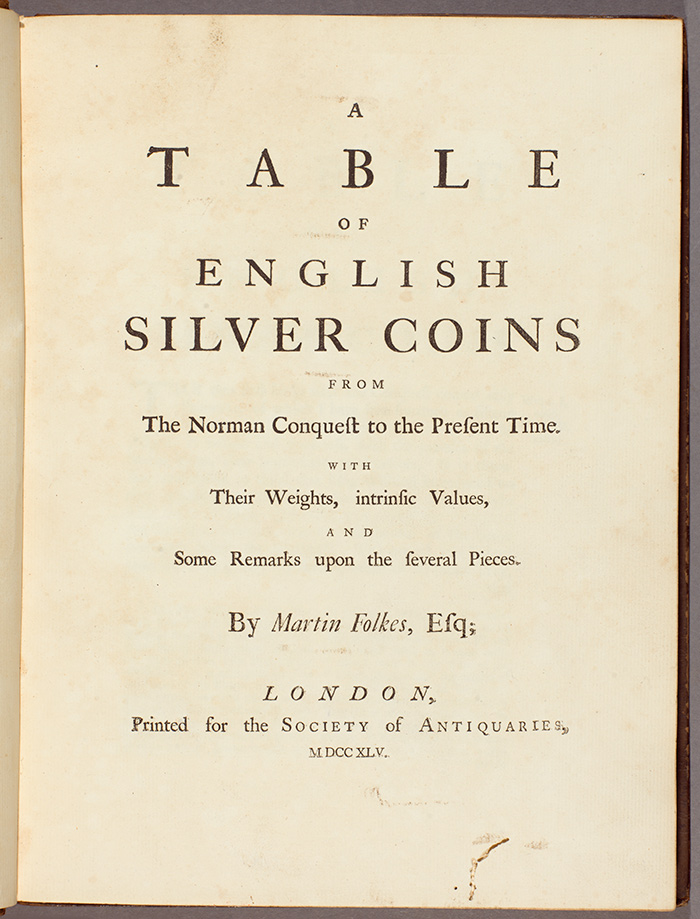 Title page of Martin Folkes’s A Table of English Silver Coins from the Norman Conquest to the Present Time, printed for the Society of Antiquaries, 1745. The Huntington Library, Art Collections, and Botanical Gardens.

In 1756, a separate auction was also held of Folkes’s massive art collection, and The Huntington’s copy of the art catalog led me, with the help of Keith Moore, the Royal Society librarian, to find four original portraits that hung in the Royal Society when it was in Crane Court in the early 18th century. The auction catalog indicated that Folkes collected a number of images by John Smith, who created mezzotints after the original oil portraits painted by Godfrey Kneller.

In the Royal Society’s Journal book for 1716, shortly after Folkes was elected to the Council, an entry indicates that Folkes donated five mezzotints of past Royal Society presidents to the Society, including portraits of Lord Carbery, Lord Somers, the Duke of Montague, and Sir Christopher Wren, the architect of Saint Paul’s Cathedral in London. 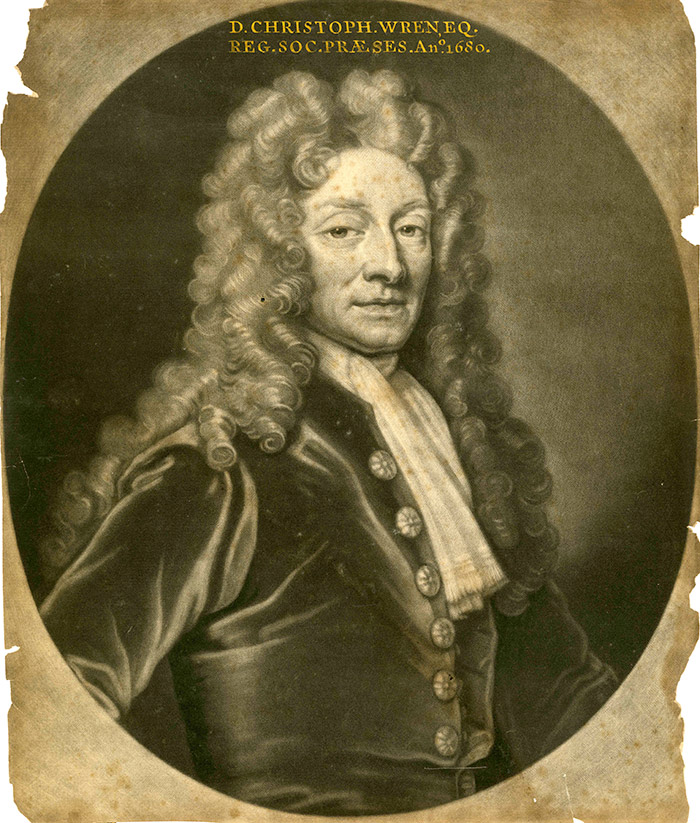 Mezzotint by John Smith of English architect and scientist Christopher Wren (1632–1723) by John Smith, after the portrait by Godfrey Kneller. The ragged edges indicate where the portrait had been taken out of the frame; the verso has acid wood marks. Image courtesy of the Royal Society, London.

At some point in the past, the mezzotint portraits were taken out of their wooden frames, but the gilt dedications and descriptions are still intact; the mezzotints are currently being conserved in London. With the help of an auction catalog at The Huntington, Keith Moore and I realized the significance of items in the Royal Society archives, promoting them from being just another set of prints into esteemed Royal Society memorabilia. And, thanks to The Huntington’s auction catalogs, we now have a much clearer picture of the remarkable career of Martin Folkes.

Anna Marie Roos is reader at the University of Lincoln, member of the Library Committee of the Royal Society of London, and has recently been named the new editor of Notes and Records of the Royal Society, the Society's journal of the history of science. An article by Roos concerning Folkes’s travels to Italy in the 1730s—"Taking Newton on Tour"—has been recently published by the British Journal of the History of Science.

Anna Marie Roos, thank you ever so for your post. Much thanks again.