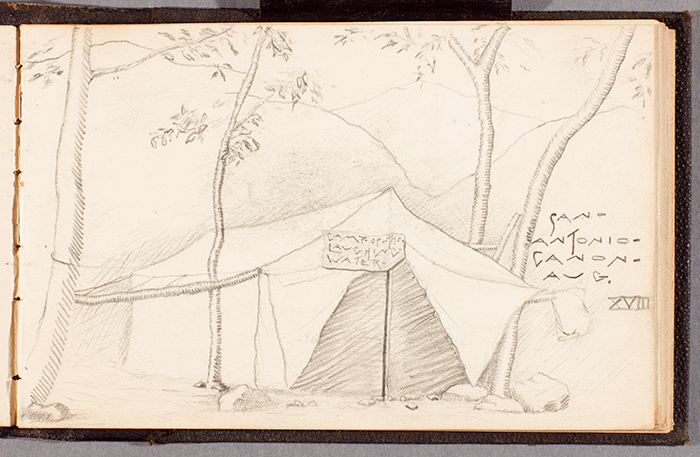 A sketch by Olive Percival (1869–1945) made during her 1893 camping trip to hike Mount San Antonio, or “Old Baldy.” Whimsically labeled “Camp of the Laughing Water,” Percival’s tent scene might have been located at Stoddard’s Camp or nearby in the San Antonio Canyon. The Huntington Library, Art Collections, and Botanical Gardens.

Summer is a time for enjoying the great outdoors, and what better way than by hiking and camping? That’s as true today as it was more than a century ago, when one remarkable woman embarked on a 10-day camping trip in the San Gabriel Mountains with a group of friends. She documented the experience in a delightful diary and sketchbook, which are contained in the Olive Percival archive, part of which resides at The Huntington.

Percival (1869–1945) was a Pasadena author, artist, and bibliophile who amassed a collection of more than 10,000 books in her lifetime. Lured to Southern California by its mild weather at the age of 18, Percival worked first in a department store and later as the first female underwriter employed by an insurance agency. Independent and adventurous, she would later travel to Mexico, design and cultivate her own gardens, and host fanciful parties for the literati of the Arroyo Seco. 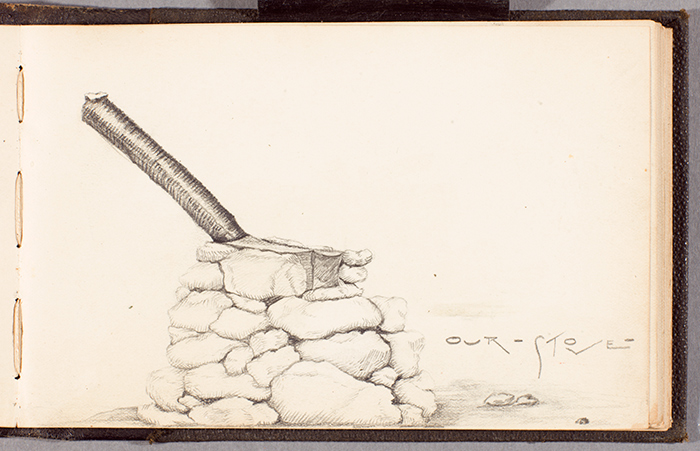 The goal of her 1893 camping trip was to hike Mount San Antonio, or “Old Baldy,” the highest peak in the San Gabriel range, reaching 10,064 feet. Filled with intimate details of the trip through San Antonio Canyon to the summit, the diary and sketchbook reveal Percival’s wit and delight in life.

Percival’s sketches document whimsical details of camp: the wooden chair she describes as “after Louis XV,” a rustic stone and pipe stove, a ham hanging in a tree, and the banjo music that served as evening entertainment. In pencil and watercolor, she depicts the trail with its burro riders and pack mules. She also captures the humor of the trip, for instance in a sketch titled “Come, oh! Come with me!” showing a determined camper pulling a recalcitrant mule. 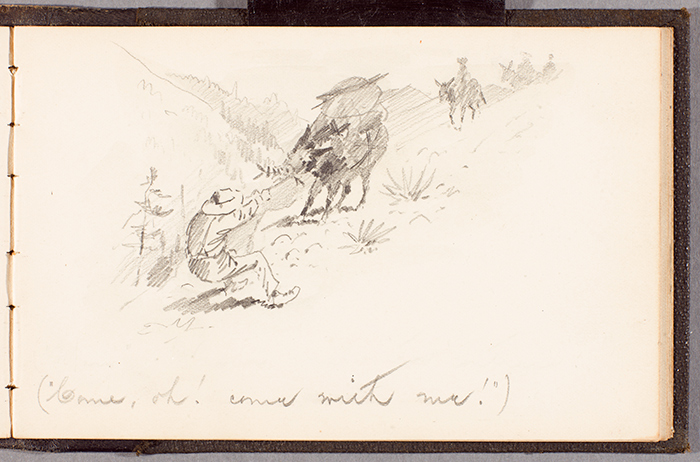 Recalling another humorous moment in her diary, she writes: “At noon we rested under some gigantic pines where we met five ‘young huntsman’—quite like a page from a story, with their sunburn, and rifles, and eating with their hunting hunger. They told us of a spring half a mile further on, our last chance to get water on the way up. We found it but the dog found it first and had a bath.”

Percival recounts the difficult trail of the ascent and a short-lived panic when she became separated from her party:

“Up early and started for the peak. A hard, hard trail. Wasted two hours on the wrong trail. No snow on the peak—been gone about six weeks. But a very strong, cold wind was blowing. I stopped a few minutes to pick up some stones for paper-weight souvenirs and then went on to overtake the others. I took the wrong trail and was lost and scared to death for nearly an hour. Finally started back for the top so they could find me more easily, and then, far away, I saw a man (Mr. Porter). He was going to the top to look for me.” 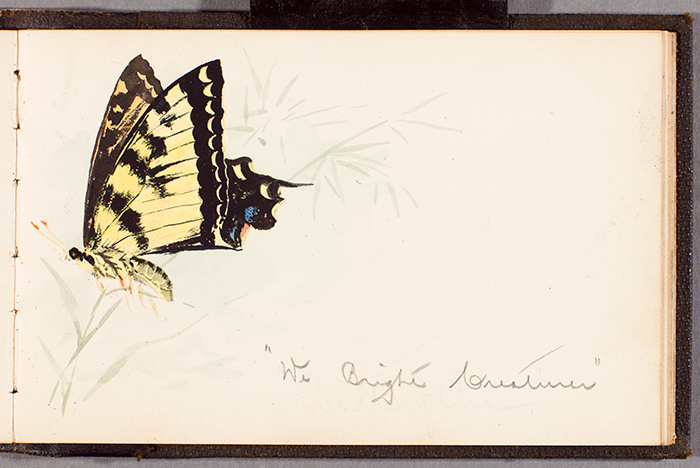 Percival made numerous sketches of the creatures she encountered along the hiking trail, including this colorful butterfly. The Huntington Library, Art Collections, and Botanical Gardens.

Percival makes numerous sketches of the wildlife she encounters, such as an exquisite, colorful butterfly and an invented bear she “did not meet” while separated from the rest of the group.

Her drawing of a miner’s camp recalls the gold mining history of the area. The Hocumac Mining Company enjoyed moderate success near Baldy Notch in the late 19th century. Percival mentions meeting Robert Brewster Stanton, the chief engineer of the mine from 1893–1894, and his family. Stanton was known as one of the first people to lead an excursion through the Grand Canyon by boat, becoming a minor celebrity. The Hocumac Mine would ultimately fail due to water-supply issues. 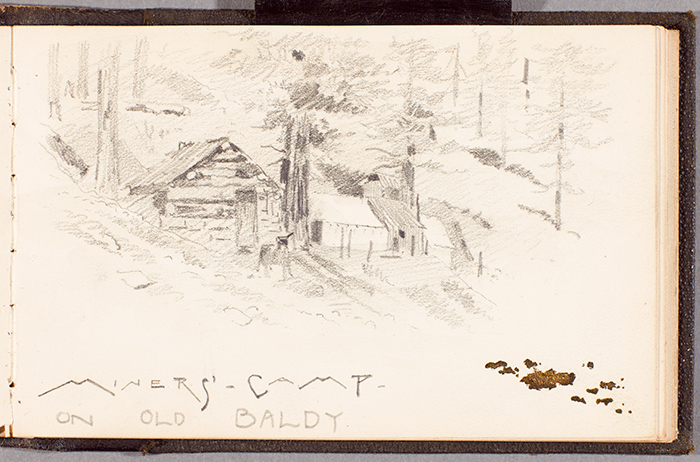 Percival’s drawing of a miner’s camp recalls the gold mining history of the area. The Huntington Library, Art Collections, and Botanical Gardens.

Percival’s sketches and prose offer a glimpse into an ephemeral world. In 1900, the San Antonio Water Company acquired the Hocumac Mine Company lands and discouraged public use. The company would later recant and open their own resort, Camp Baldy, but the rugged camps of the 1890s never returned.

Today we can drive most of the way up “Old Baldy.” But only the hardy and sure-footed can reach the final peak, as Olive Percival did more than a century ago, recording her trip in lively words and vivid images. 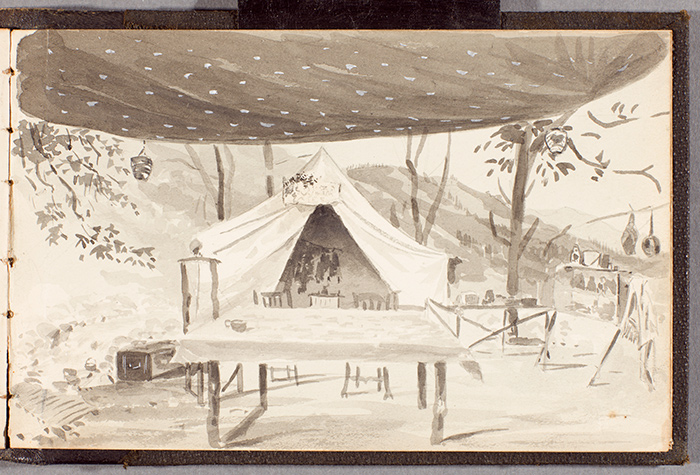 Percival’s most detailed view of a campsite during her 1893 trip to Old Baldy. The Huntington Library, Art Collections, and Botanical Gardens.

Natalie Russell is The Huntington’s assistant curator of literary collections.