An Artwork Blooms in the Garden 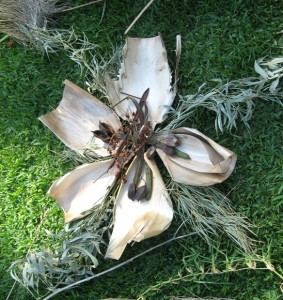 Several hundred visitors had a chance to exhibit their artwork at The Huntington on Saturday, Oct. 2. This wasn't your ordinary art show, however. For one thing, the media these artists were working with included leaves, twigs, seed pods, palm fronds, pinecones, bark, fruit, and flowers.

In an event dubbed the Big Draw, adults, children, teenagers, and even toddlers participated in a communal art project celebrating the act of drawing. No pencils were required; Nature herself provided the drafting materials for this wonderfully organic work of art. Using a wide expanse of lawn below the Palm Garden as a living canvas, visitors were invited to make their "mark" by placing botanical materials on the grass to create a giant collage. The general outlines were loosely inspired by a Medieval design in the Librar's illuminated manuscript of Geoffrey Chaucer's The Canterbury Tales, but that merely served as a point of departure for individual inspiration. Lines, patterns, colors, and textures emerged and changed with each person's own additions. The project was organized by The Huntington's education and botanical staffs.

Guy Fish, art education manager, stood back to watch as an older woman and a teenaged girl worked side by side creating a complex design with overlapping "petals" fashioned from thin cross-sections of wood. A young boy and his parents added some shape to an existing pattern with a pinecone and a handful of magnolia leaves while his grandparents offered suggestions and encouragement from the sidelines.

"I'm really pleased to see so much intergenerational participation," said Fish. "It's so exciting to see families enjoying a creative experience like this together." 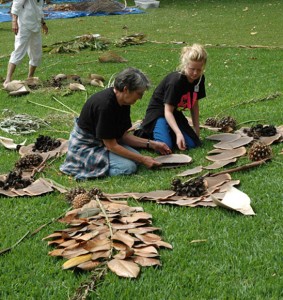 Fish also noted that the communal nature of the project was an ice-breaker among strangers. "I love how it's opening up conversations, and getting people talking to one another about the creative process."

Seven-year-old Chealuna Wright approached the work-in-progress a bit tentatively at first but quickly got caught up in the spirit of the project. Her grandmother, Maria Ochoa, beamed as she snapped photos. "At first she said to me, 'Someone put things on the outside. They're not supposed to do that, are they?'" said Ochoa, pointing to an elaborate embellishment an earlier visitor had made with papyrus stalks and bamboo sheaths on the outer edge of a border. "And I said to her, 'Remember The Little Prince?'—We're reading it together now; it's such a beautiful book. So I said, 'Remember, it's all about being creative in your own way.' And look at her now, she's having a wonderful time."

The event was part of the Big Draw L.A., a month-long series coordinated by Ryman Arts that seeks to stimulate creativity and social engagement through innovative activities at museums and cultural organizations around Los Angeles. Inspired by a program founded in the United Kingdom in 2000, the Big Draw has now been embraced in cities across the United States.

"Drawing is all around us, not just in the galleries," says Fish. "That's one of the reasons we wanted to use the botanical collections for our program. Creating lines and shapes with plant materials really engages the imagination and encourages people to think about art in new ways." 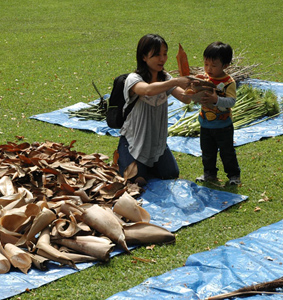 The artists came and went throughout the afternoon, each adding his or her own contribution. Some visitors worked intently for a half-hour or more on a detailed portion of the design, others passed through just long enough to contribute a bit of color or a single flourish where needed. Even many toddlers got into the act, adding their own embellishments—the bold green line of an agapanthus stalk, the dappled texture of a handful of flower petals—to the ever-changing work of art.

For Ofer Barr, age 9, working on a communal artwork made of plant materials was a new and rather strange experience. "It's weird," he confessed with adolescent candor. But he and his seven-year-old brother, Yotam, embraced the weirdness with enthusiasm. Soon they were making their own distinctive mark with a three-dimensional sculpture of branches and fronds rising up from the grassy canvas.

Stepping back to survey the result, Ofer could see that his handiwork was a small part of a larger endeavor, and the magic of a participatory art project seemed suddenly to crystallize in his mind. "Everyone adds their own touches," he said, "and you never know how it'll turn out."

See additional photos of The Big Draw on Flickr.