Artists in the Library

In June 2017, The Huntington announced “COLLECTION/S: WCCW/five at The Huntington,” an exhibition that will be on view in the Virginia Steele Scott Galleries of American Art from Nov. 18, 2017, through Feb. 12, 2018. Part of the second year of /five—The Huntington’s five-year contemporary arts initiative focused on creative collaborations—the exhibition will be a manifestation of The Huntington’s yearlong partnership with the Los Angeles–based Women’s Center for Creative Work (WCCW). The exhibition will feature new work by seven artists, selected by WCCW, who are currently conducting research in The Huntington’s library, art, and botanical collections. Catherine G. Wagley, a freelance journalist who writes about art and visual culture in Los Angeles, focuses in this post on the two artists delving into the Library collections: Kiki Loveday (née kerrie welsh) and Jheanelle Garriques. 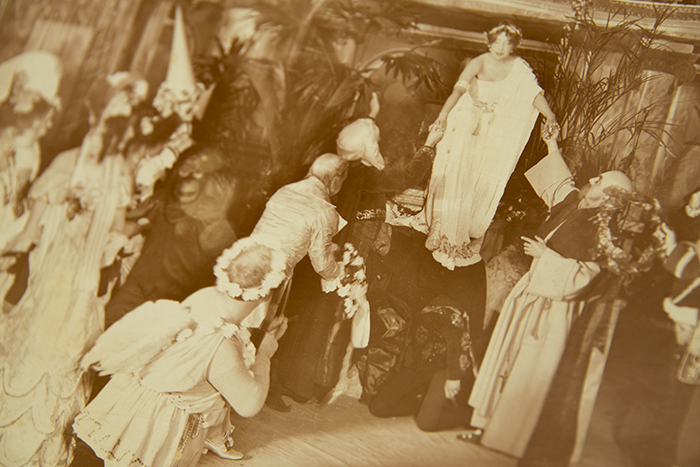 Actress Olga Nethersole (1867–1951), playing the role of Sappho, descends from a pedestal on which she has been posing as a statue, stepping down on a ‘staircase’ formed by the backs of men. Detail of Olga Nethersole and cast in the Clyde Fitch production of “Sapho,” Act I, 1900. J. Byron, photographer. L.E. Behymer Collection. The Huntington Library, Art Collections, and Botanical Gardens.

A photograph of the actress, director, and producer Olga Nethersole (1867–1951) shows her descending from a pedestal on which she had been posing as a statue. Men crouch and kneel beneath her. “I’ve always wondered, how does she get from pedestal to ground?” says filmmaker and scholar Kiki Loveday, currently a doctoral candidate studying feminist and queer film historiography at UC Santa Cruz. “She descends a ‘staircase’ that is literally the backs of men. She’s always over the top,” says Loveday, who found the photograph, a rare depiction of the actress’s controversial 1900 turn as Sappho, in The Huntington’s archives.

Loveday has been researching representations of the ancient Greek love poet Sappho, who came from the island of Lesbos and from whom the word Lesbian originated (Lesbian means “from Lesbos”). Nethersole’s performances are among Loveday’s favorite Sappho interpretations. “She blows my mind all the time,” she says of the actress, recalling the outrage Nethersole weathered after her turn-of-the-century depiction of Sappho. Critics called the performance scandalous, and an indecency trial ensued, but few directly named what bothered them: the open female queerness of Nethersole’s performance. 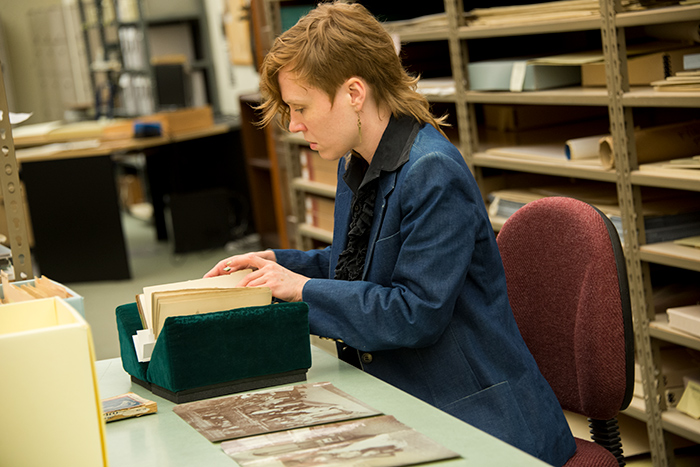 “In this moment in Victorian culture, there is an ideology of unspeakability,” observes Loveday. “My own reading is that people knew very well what Nethersole was proclaiming through her appropriation of Sappho. One critic, Alan Dale, wrote absolutely vitriolic condemnations of Nethersole, and what I found was that many of the insults he slung at her had double meanings with queer associations.”

Loveday’s /five project counteracts such historical veilings and unspeakability regarding queerness in both cultural and private arenas. She has been frustrated by the false secrecy that surrounded Nethersole’s performance of sexuality and by so-called “Sappho defenders” who, over the years, have argued that the sensual poet wasn’t “gay,” as if acknowledging her same-sex desire would undermine her importance. 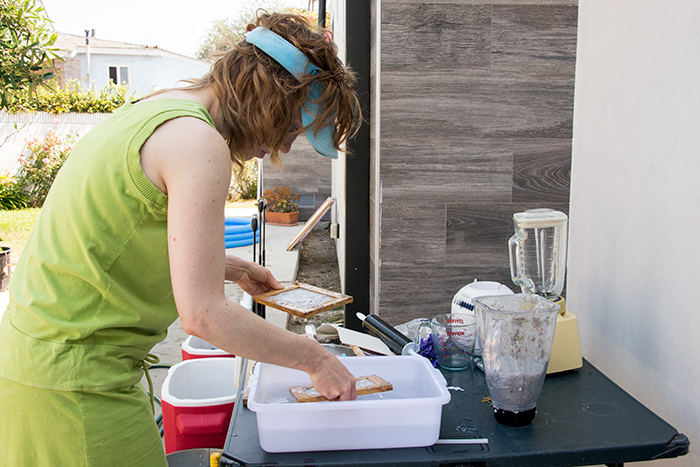 Loveday makes stationery out of her own copies of a popular and widely available novel, Alphonse Daudet’s Sappho: Parisian Manners, that she has turned—along with newspapers and other materials—into pulp. She will write letters on this handmade stationery and send them to individuals and organizations whom she believes have stories of queer love that should be recorded. Photo by Kate Lain.

Loveday has been collecting her own copies of Alphonse Daudet’s Sappho: Parisian Manners, an immensely popular 1884 novel about a courtesan nicknamed after the Greek poet because her sexuality includes “every string on the lyre.” Its popularity and wide availability makes it one of the few historical books she’s willing to tear apart and turn to pulp—to literally make stationery out of one version of Sappho’s story. She is then writing letters on this handmade stationery and sending them out to individuals and organizations whom she believes have stories of queer love that should be recorded. She is also collecting personal diaries or other ephemera.

Loveday is interested in the personal narratives that get buried beneath the professional or cultural ones. “My work is really about this relationship between personal histories and cultural histories,” she says. She hopes that her newly begun archive, which will be at least partially exhibited in The Huntington’s Virginia Steele Scott Galleries of American Art starting on Nov. 18, will have a long life. “What I imagine is I’m going to get this all set up and then the archive, called ‘What You Love,’ will continue to grow,” she says. She is particularly interested in stories that are at risk of being lost and invites anyone who has a queer love story, diaries, or ephemera to visit her website for more information and get in touch. 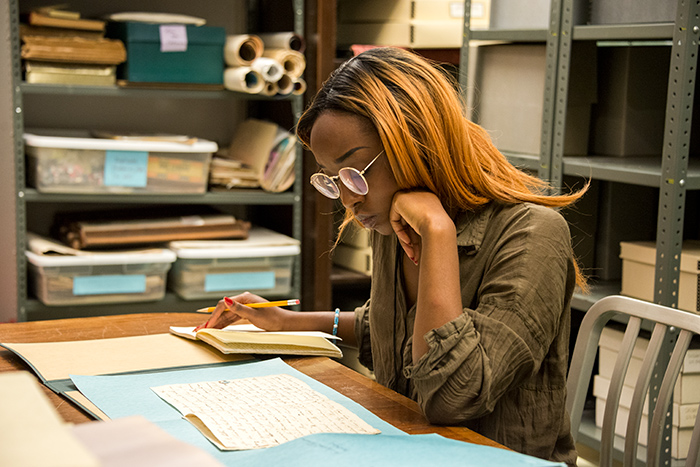 Jheanelle Garriques reads 18th-century letters from the Library's Elizabeth Montagu archive as part of her research. Photo by Kate Lain.

Jheanelle Garriques has also been working with letters, poring over those by Elizabeth Montagu (1718–1800), host of 18th-century salons, supporter of women, and avid correspondent. Montagu wrote profusely in an elegant script, as did the women to whom she wrote. “They could be vulnerable, and their letters are so informal and beautiful,” says Garriques of Montagu and her colleagues, the women who attended the salons Montagu hosted. They belonged to the Blue Stocking Society for women’s education that she helped found. Blue stockings, less formal than black or white, are the kinds of things an 18th-century English person may have worn at home. Montagu, who ran profitable coal mines with her husband and then continued to run them after his death in 1776, likely knew that her efforts to empower women blurred boundaries between domestic and cultural-political realms. “She developed the careers of so many female writers,” says Garriques, a writer, scholar, and feminist who has read many letters in The Huntington’s extensive Montagu Collection as part of her /five residency. “These writers express ideas with each other over so many iterations.”

Garriques began hosting her own writing salons back in 2014, calling her project Naked Narratives. She brings femme-identified individuals together to share and write their stories. Sometimes, they write about a common experience—a current series of workshops in Los Angeles, New York, and Chicago is designed specifically for sex workers. Sometimes themes are more open-ended. At The Huntington this summer, Garriques hosted five salons with seven femme participants. At the first meeting, they wrote about lips, and at subsequent meetings, they wrote about hands, hair, eyes, and skin. “Salons themselves are not just about writing,” she says. “They are also about self-care.” Writing on these themes involved exploring the sensual in relation to the intellectual, the personal in relation to the cultural. Salon members also spent time reading and discussing Elizabeth Montagu, her colleagues, and their letters. “A lot of this project is about figuring out, how do we bring life to and contextualize this material now?” 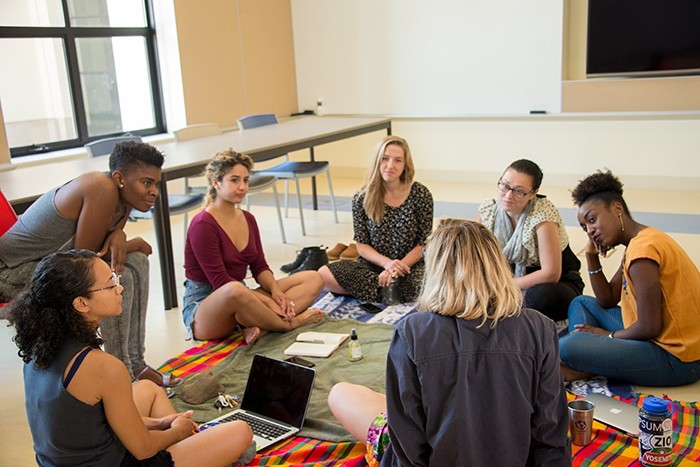 Garriques hosted five salons at The Huntington this summer. The participants at one of the salons (clockwise from bottom left) were Camille LaGrange, Turay Turay, Sydney Lopez, Rachel O'Leary, Renae Keene, Jheanelle Garriques, and Afton Montgomery. Photo by Kate Lain.

She’s thought at length about Montagu’s relative privilege. “Because she was wealthy, there were things she couldn’t understand, but in her own way she was doing something very different,” says Garriques, noting that while Montagu did support artists of a lower class than herself, she didn’t stray too far from her comfort zone. Garriques’ salon participants, in contrast, come from a large variety of backgrounds. She asks, “As a person who comes from marginalized places, how do you exist in a space that is not for you?”

Part of her approach involves expanding the salon format, making it more inclusive not only of diverse people, but also of different forms. A chapbook published this fall will bring together writings from Naked Narratives participants with letters from the Montagu collections, and on Sept. 14 at 7 p.m. in The Huntington’s Rothenberg Hall, Garriques' salon members will perform alongside dancers from the local Sokamba performing arts company and two musicians in an event titled “Bodies of Lineage.” (The event is free, and no reservations are required.) The performance’s narrative will come from the writings that the salons’ members completed this summer and fall. Text from the Montagu collection may be projected on walls, or read aloud. “I like working in different mediums,” says Garriques. “Stories are told in a multitude of ways.” 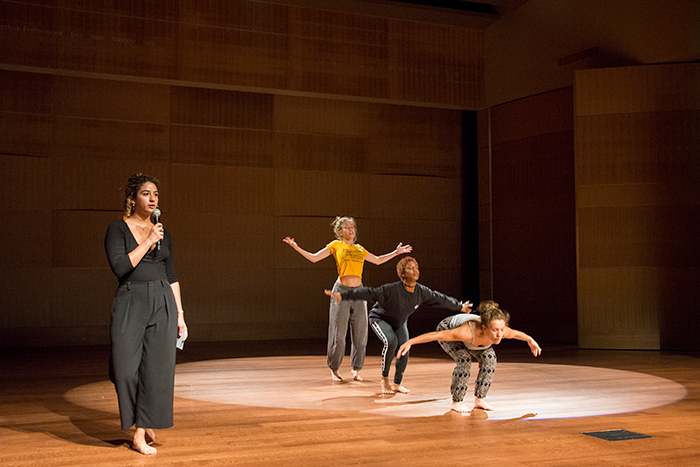 Garriques' salon members will perform alongside dancers from the Sokamba performing arts company in an event titled “Bodies of Lineage” at 7 p.m. on Sept. 14 in The Huntington’s Rothenberg Hall. The performance’s narrative will come from the writings that the salons’ members completed this summer and fall. At a recent rehearsal, salon member Sydney Lopez (far left) joins Sokamba dancers on stage. The dancers (back to front) are Lara Marcin, Rachelle Clark, and Caribay Franke. Photo by Kate Lain.

You can read more about "Bodies of Lineage" on The Huntington's website. The event is free, and no reservations are required.

Catherine G. Wagley is a freelance journalist who writes about art and visual culture in Los Angeles.