Artists in the Gardens

Opening Nov. 18, the exhibition “COLLECTION/S: WCCW/five at The Huntington” will be on view in the Virginia Steele Scott Galleries of American Art through Feb. 12, 2018. Part of the second year of /five —The Huntington’s five-year contemporary arts initiative focused on creative collaborations—the exhibition will be a manifestation of The Huntington’s yearlong partnership with the Los Angeles-based Women’s Center for Creative Work (WCCW). The exhibition will feature new work by seven artists, selected by WCCW, who have conducted research in The Huntington’s library, art, and botanical collections. Catherine G. Wagley, a freelance journalist who writes about art and visual culture in Los Angeles, focuses in this post on the three artists delving into the botanical collections: Zya S. Levy, Sarita Dougherty, and Olivia Chumacero. 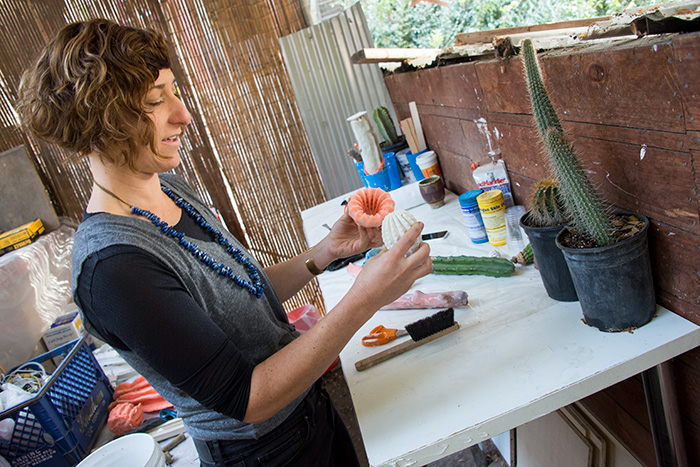 During the past two months, artist-botanist Zya S. Levy has made 300 plaster casts of cacti. Photo by Kate Lain.

“I’m interested in rarity and abundance coexisting in the same sphere,” says artist-botanist Zya S. Levy. It is late afternoon in August, and Levy and her longtime collaborator, artist Kaitlin Pomerantz, are working at a big table in a backyard in Highland Park, covering cacti with silicon to make molds. Pomerantz is visiting from Philadelphia, where she’s still based, helping Levy with these molds that will eventually become an army of plaster plants. When Levy and Pomerantz founded their project WE THE WEEDSin Philadelphia a few years ago, they started giving urban tours, showing how natural and human-made environments interacted. This year, as part of her Huntington residency, Levy has been exploring the tangible, urban effects of collectors who brought exotic plants back to cities like Los Angeles, where they can be found growing on medians or in sidewalk cracks. “These collections have infiltrated our daily lives,” observes Levy. 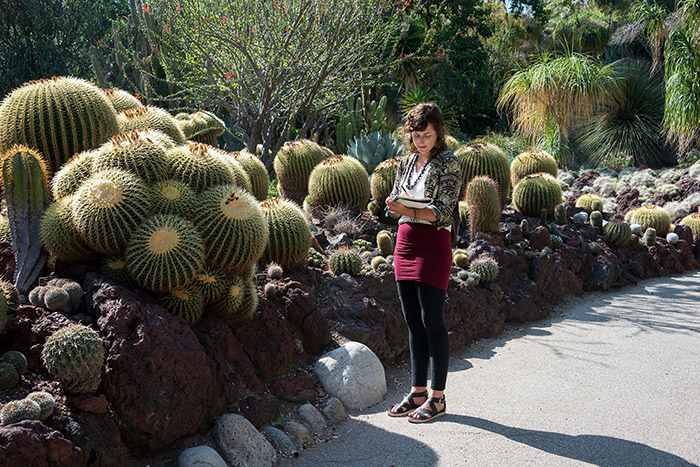 Levy regularly spots in L.A. yards the same non-native cactus species that she sees in The Huntington’s Desert Garden, even though certain species are now nearly extinct in their places of origin—in some cases due to Western collectors and in others, such as the golden barrel cactus (Echinocactus grusonii), largely due to habitat destruction. “There weren't as many cultural constructs around caring for nature,” she says. In a curious twist of fate, the collector has become the conservator, a reality that also informs Levy’s project. During the past two months, Levy has made 300 plaster casts of cacti, based on models found at Home Depot and Sal’s Cactus Mart in Filmore, California—or discarded on street corners. A total of 150 casts will appear in a group exhibition featuring The Huntington’s seven artists-in-residence in November. Levy built a stair-step structure on which to exhibit them and painted it white. Cast cacti occupy each step, and a display case sits at the top. Additional casts will occupy white-painted crates on the gallery floor. “A cascading display of preciousness,” Levy calls the installation. A parabolic speaker will hang above the installation, broadcasting ambient sounds recorded in Eaton Canyon, on L.A.’s streets, in The Huntington’s gardens, and in New Mexico. These sounds narrate the movement of species from wild to urban settings, from uncultivated to cultivated environments. 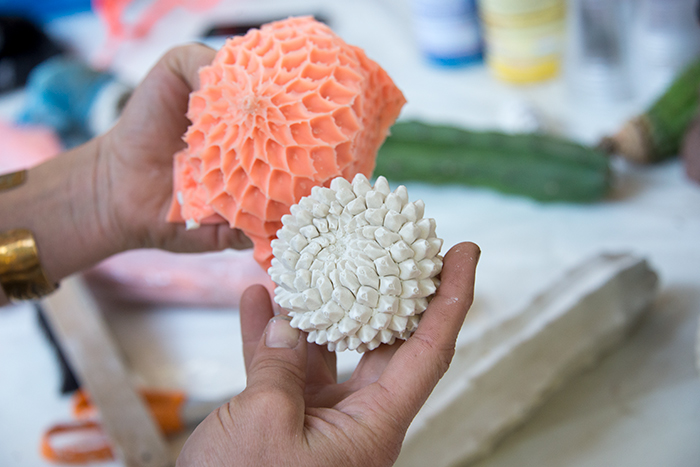 A total of 150 of Levy’s cacti casts will appear in a group exhibition featuring The Huntington’s seven artists-in-residence in November. Photo by Kate Lain.

In November, Levy will lead a trio of hour-long walking tours for the public. (All three tours have sold out.) “This interest in ubiquity and rarity leads into the tours,” she says. “I want to highlight plants that are rare in the wild that might be among us.” She will give one tour in downtown L.A.’s Grand Park, another along the streets in Highland Park, and a third in The Huntington’s Desert Garden. She’ll highlight the origins and uses of certain plants. For instance, the Canary Islands dragon tree, Dracaena draco, grows in the Desert Garden. “The red resin sap was used for incense, and its resin was used for embalming people,” she explains, though this is just one example. “All plants have great stories.” A different tree has become a protagonist in both Sarita Dougherty’s painting and Olivia Chumacero’s video work. The two artists had been working on a collaborative project in an uncultivated part of The Huntington’s grounds not open to the public, when both connected with the Oaxacan weeping pine, Pinus patula, an elegant tree with drooping limbs and long needles that fall downward, like threads held in an invisible hand. “I remember this pine tree because I used to come rest and eat under it,” says Chumacero, who worked on the grounds in the mid-2000s, when she helped Metabolic Studio transplant trees from the now-razed South Central Farm to The Huntington. 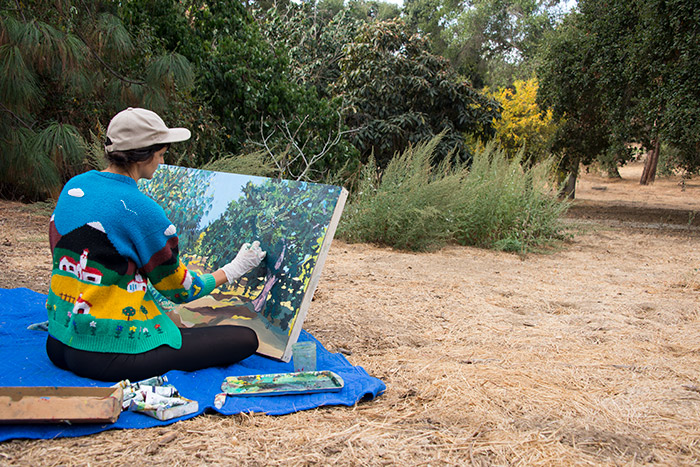 Artist Sarita Dougherty paints in an uncultivated part of The Huntington’s grounds. Photo by Kate Lain.

“I was looking more for an oak tree,” says Dougherty, sitting on a blanket, painting as she speaks. A stand of mugwort between an oak tree and the pine will be the centerpiece of her painting. “But every time I saw the pine, I just thought it was so beautiful that I had to paint it as well.” Earlier in the spring, she painted a California lilac in full bloom. Chumacero filmed this plant, too. Both were drawn to it, even though they hadn’t discussed it. Dougherty and Chumacero come early on Tuesdays and Thursdays, when it’s quiet, and work in a lightly trodden area of the gardens. Both artists study the healing and nourishing properties of plants—Chumacero’s livelihood comes from leading workshopson indigenous and medicinal species. Since their Huntington residency began, they’ve been interested in the contrast between the cultivated and uncultivated land, and in different definitions of collecting. 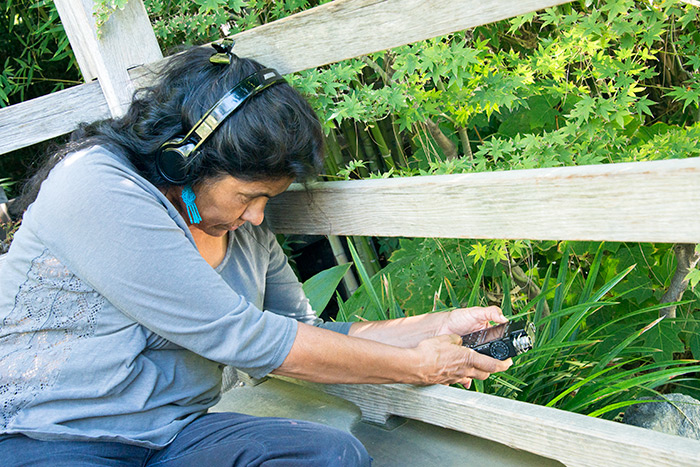 Artist Olivia Chumacero records the sound of a waterfall in The Huntington’s Japanese Garden to include in her video work. Photo by Kate Lain.

At first, in the spring, the two artists tried making work in the public, more closely tended gardens. Dougherty finished a few small paintings of plants in bloom, but none of these will be in the group exhibition in November. “We found that the plants back here have so many more stories to tell, maybe because they aren’t as tended to,” Dougherty explains. “So, they’ve made complex relationships with each other. We’re able to see that they’ve been here a really long time.” “They’re not manicured and cultivated like the rest of the garden,” says Chumacero. She shot video both of the spring bloom and the dormant season. Now she’s editing the footage. The videos, each around five minutes long, will loop on a single monitor installed near Dougherty’s paintings, when the exhibition opens. Chumacero also harvested some long needles from the weeping pine and gave them to basket weaver Cindi Alvitre of the Tongva maritime Ti’at Society. The resulting basket will be in the exhibition as evidence of the symbiotic relationship between humans and plant life. 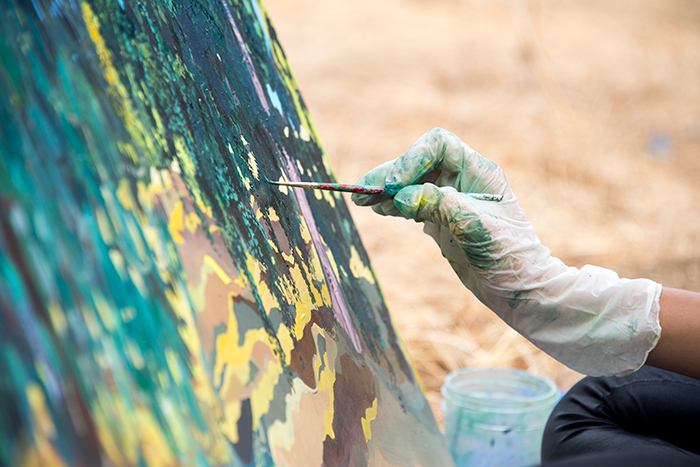 “Just being back here painting is the best thing,” says artist Sarita Dougherty, as she works in quiet in a lightly trodden area of The Huntington’s grounds. Photo by Kate Lain.

“Just being back here painting is the best thing,” says Dougherty, the pine tree still the most prominent figure in her in-progress painting. “It’s gorgeous, and the plants are so vibrant.” In addition to two paintings, she’s designed a wallpaper that she calls Domestic Flora, based on the native plants and animals in the garden. A strip of it will be installed in the galleries in November. “The idea is that someone could decorate their home based on native flora,” she explains, “because that’s our hope, that we can increase the visibility of these plants and ecosystems.” She continues, “In the eyes of many collectors, the native plants haven’t really had the same value as exotics from other places. So, we’re pulling attention to the amazing beauty of all of these plants that support each other.” Says Chumacero, “The native flora has evolved on these lands for thousands if not millions of years, and they continue to feed us, keep us in good health, as well as feed all the native pollinators, of which there are thousands here. I am willing to do as much as possible so that they can survive.” The /five initiative is made possible by a generous gift from The Cheng Family Foundation. Additional funding for the second year of /five has been provided by a grant from the Pasadena Art Alliance. Catherine G. Wagley is a freelance journalist who writes about art and visual culture in Los Angeles.