In June 2017, The Huntington announced “COLLECTION/S: WCCW/five at The Huntington,” an exhibition that will be on view in the Virginia Steele Scott Galleries of American Art from Nov. 18, 2017, through Feb. 12, 2018. Part of the second year of /five—The Huntington’s five-year contemporary arts initiative focused on creative collaborations—the exhibition will be a manifestation of The Huntington’s yearlong partnership with the Los Angeles-based Women’s Center for Creative Work (WCCW). The exhibition will feature new work by seven artists, selected by WCCW, who are currently conducting research in The Huntington’s library, art, and botanical collections. Catherine G. Wagley, a freelance journalist who writes about art and visual culture in Los Angeles, focuses in this post on the two artists delving into the Art Collections: Soyoung Shin and Juliana Wisdom. 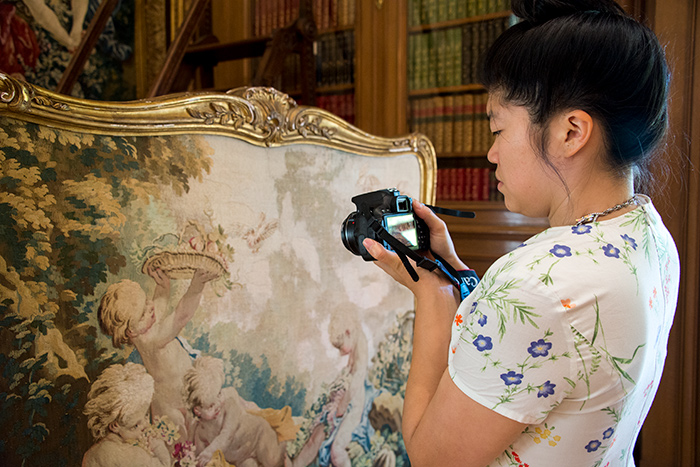 Soyoung Shin photographs an 18th-century tapestry-covered fire screen in the Huntington Art Gallery as part of her research. Photo by Kate Lain.

“This was one of the first major purchases of art that Henry Huntington made at the request of his wife Arabella,” says Soyoung Shin. She is standing in front of the 19-foot wide tapestry The Bird Catchers in the Huntington Art Gallery. The French artist François Boucher designed it circa 1748 and craftspeople at the Beauvais Tapestry Manufactory in Northern France wove it over the course of two years. The ornate, playful scene shows women and men in silk outfits lounging amidst foliage as classical ruins loom behind them. Another tapestry from the same set by Boucher hangs on an opposite wall.

“This is the only intact set,” continues Shin, who studied computer science at the University of Washington and is interested in overlaps of craft and computing. She initially considered developing a digital algorithm for recording the craft of these objects to make them reproducible, but she soon realized how gargantuan a task this would be: some wefts, the visible threads that form the scene, are smaller than others; zigzaggy patterns produce gradients. “It’s not uniform,” she explains. Her algorithm project would likely have taken years, more time than she had. 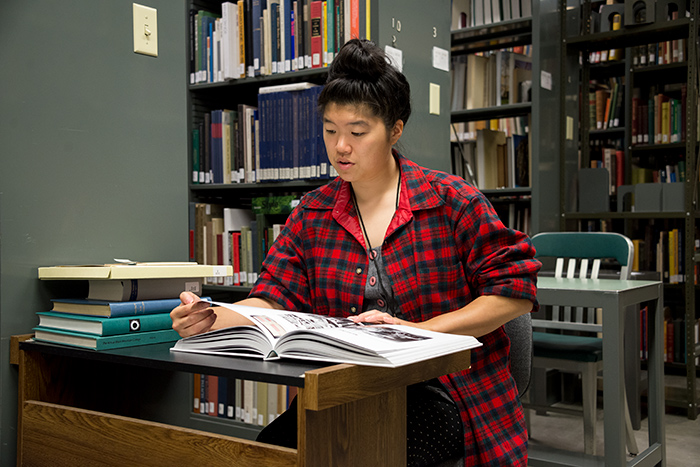 Soyoung Shin reads about textiles in the Huntington Library. Photo by Kate Lain.

Instead, she designed her own tapestry with Boucher’s work as loose inspiration. “I’m interested in this lineage of how Jacquard turned into modern computing,” she says, citing the loom that Frenchman Joseph Jacquard designed in 1801. That loom used punch cards to store weaving instructions for the loom—and this practice formed the basis for modern computing.

Shin wanted to honor the role women have traditionally played as weavers. “But what’s hard is their history is very much pre-photo,” she says. She found few images of women at looms before Jacquard’s loom became standard.

She chose instead as her source image a 1946 photo of eight men standing in front of ENIAC, among the earliest general computers ever made. (The men had neglected to tell the team of women who programmed the computer about the photo-op.) 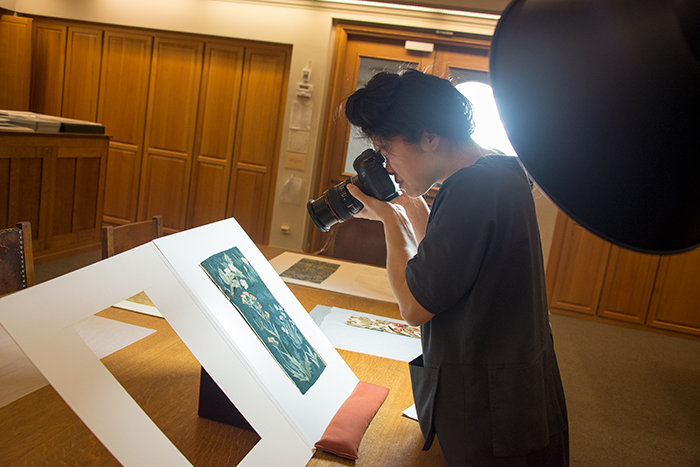 Soyoung Shin photographs a tapestry sample (ca. 1890) at The Huntington as part of her research. Photo by Kate Lain.

The tapestry depicting those men will be woven at a Belgian factory in Flanders. Then Shin will remove the men. “I’m going to do a lot of reweaving and unraveling,” she says, pointing out that the Boucher tapestries were unwoven following the French Revolution, to remove the symbol of the monarchy.

Once Shin removes the men, she will sew in five female figures from a second tapestry she designed. ENIAC programmers Betty Holberton and Jean Bartik will stand beside textile artist and scholar Anni Albers. Ada Lovelace, the English mathematician who proposed the first computer program in the mid-1800s, will be there; so will Grace Hopper, the computer pioneer who joined the Navy reserves during World War II.  Programming was a female craft early on. “Even up to the 1980s, computer science programs were 40 percent women,” Shin says. (By 2011, only 17 percent were women.) The border around her tapestries will mimic regal borders woven in the Beauvais Tapestry Manufactory. “It’s nice that it points back to the collection.” 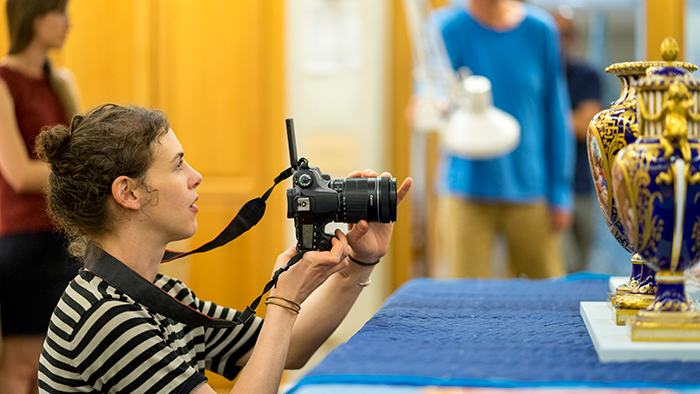 Juliana Wisdom photographs Sévres porcelain at The Huntington as part of her research. Photo by Aric Allen.

Artist Juliana Wisdom, also in residence with /five, has herself gone deep into the history of design in Revolutionary-era France. Her research centers around The Huntington’s collection of Sèvres porcelain, all made between 1757 and the mid-1900s and often thanks to the skilled labor of largely uncredited women. She’s been poring over the Sèvres manufactory directories owned by The Huntington, looking for traces of these female workers. “Most women were paid through their husbands,” says Wisdom, noting that women frequently worked from home, carting the delicate objects back and forth from the factory. Printouts of some of The Huntington’s Sèvres vases and trays hang on walls and cabinet doors in Wisdom’s small Chinatown studio. Seven in-progress ceramic sculptures, all made in response to the Sèvres manufactory production, sit on a waist-high table.

“I want things to feel organic but still have this air of high refinement,” she says of the works she’s been making. Her sculpture takes on an almost meta role in relation to The Huntington’s collection, telling in small parts the story of the Sèvres manufactory and the culture surrounding it. “Each piece is dedicated to a different group of women,” she says of a trio of hand-built porcelain vessels. One representing the monarchy will have a china-painted portrait of Sèvres patron Marie Antoinette on its surface; another vessel portraying the nobility will feature a portrait of Madame Pompadour—politician, mistress of King Louis XV, and among the first patrons of the porcelain manufactory; Madame Geoffrin, who ran a famous salon, will be pictured on the vessel representing the bourgeoisie. “All three pieces also refer to the work of the women of the Sèvres factory,” she says. Each features the floral ornament, gilding, or patterning developed by female Sèvres workers. 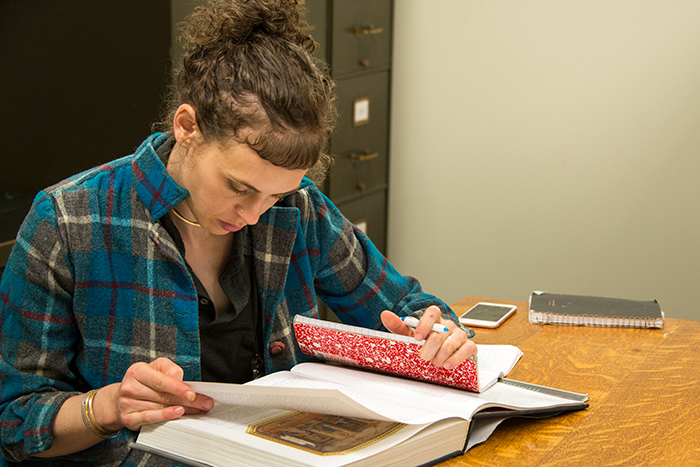 Also in-progress is an unglazed ceramic wig with chalky white swirling curls embellished by jewelry. The wig stand beside it will, once finished, depict on one side the march that peasant women led to Versailles in protest of food shortages. The other side will feature a portrait of Genevieve Tallandier, the craftswoman who created the pink-and-white fond Tallandier pattern. She will be faceless. No one knows what she looked like, and still less is known about other female workers—often, directories list only their family names. Through her project, Wisdom wants to acknowledge such gaps in the history.

The largest vase on her studio table, which has dolphins for handles, will ultimately express—through paintings on its surface—class tensions between the monarchy and the lower bourgeoisie, the class the Sèvres manufactory employed. Elegant vertical bars run across an opening on its side. One bar is broken, making the vase’s fragility readily apparent.

“I haven’t really been concerned with things cracking or breaking,” she says. “It can have surface refinement and also be loose and immediate.” 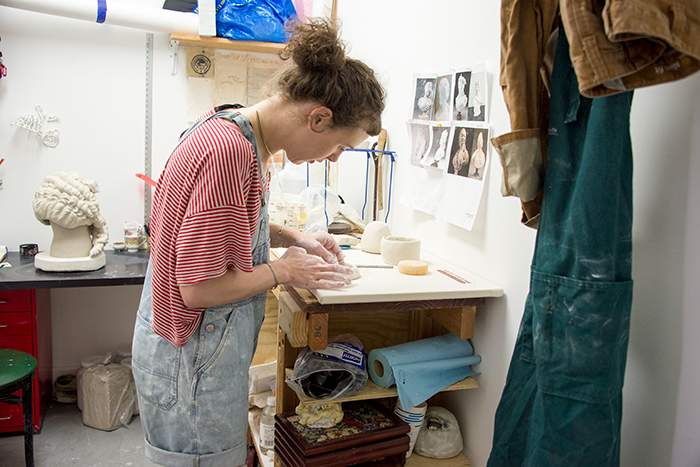 Juliana Wisdom begins work on a porcelain maquette in her studio. Photo by Kate Lain.

Catherine G. Wagley is a freelance journalist who writes about art and visual culture in Los Angeles.