Ancestor in a Japanese Guest Book 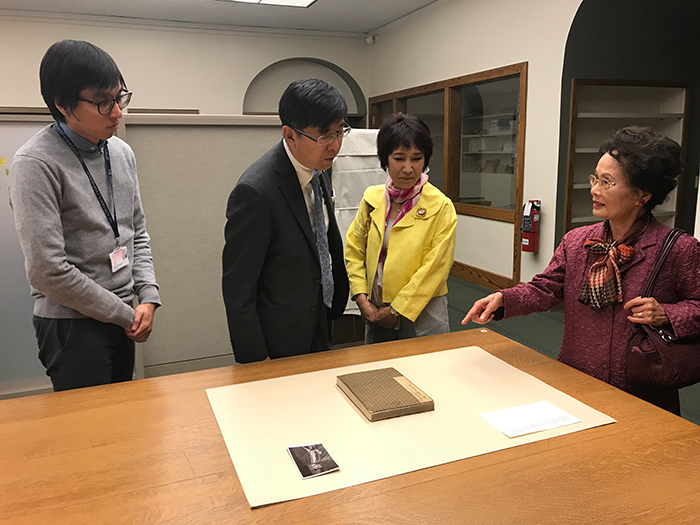 Akira Chiba (middle left), the consul general of Japan in Los Angeles, and his wife, Yuko Chiba (middle right) look at a guest book for a welcome party organized by the Japanese Red Cross to honor Sir Frederick Treves, personal physician to King Edward VII, on May 3, 1904, in Tokyo. The guest book, which contains signatures by Akira Chiba’s great-grandfather, was acquired and recently donated to The Huntington by Frank and Toshie Mosher (Toshie Mosher is on the far right). Li Wei Yang (far left), is curator of Pacific Rim Collections. Photo by Jim Folsom.

When Akira Chiba, the consul general of Japan in Los Angeles, came to visit The Huntington, he had an opportunity to look at one of the Library’s recent acquisitions—a guest book that contains the signature of one of his illustrious forebears.

Chiba’s great-grandfather was the esteemed physician and bacteriologist Shibasaburo Kitasato (1853–1931), who was best known for his research on such diseases as tetanus, tuberculosis, and bubonic plague, as well as his administrative efforts to improve public health in Japan. He went on to found the Kitasato Institute, the forerunner to today’s Kitasato University, in Tokyo.

As a young man in 1885, Kitasato was sent by the Japanese government to Germany to study with the best microbiologists of the time. He spent seven years in Germany, jointly publishing his breakthrough work on tetanus immunization with Emil von Behring, who had done similar work regarding diptheria. (Von Behring would go on to win a Nobel Prize for this work in 1901.) In 1891, Kitasato became the first foreign scientist to receive the honorary title of professor from the German government. Kitasato returned to Japan in 1892, where he founded a lab to study bacteriology, and the institute grew in stature and size under his leadership. 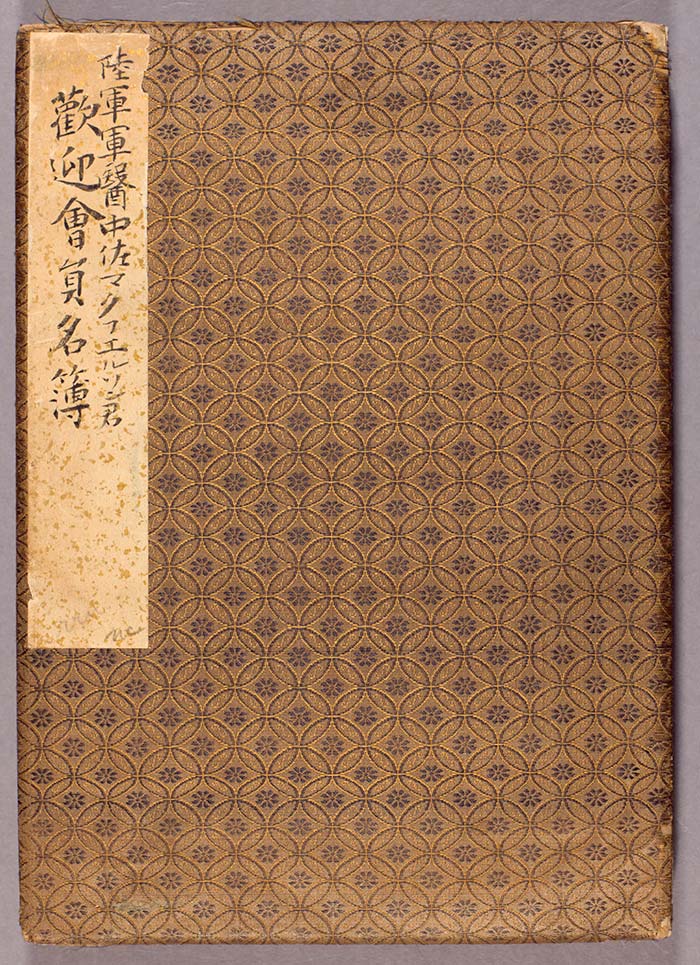 Kitasato’s government-sponsored time abroad was not unique. Only a few decades after the opening of Japan to the West, many of the nation’s brightest had been sent to foreign lands to acquire skills and knowledge in a variety of fields. Many of them gathered at a welcome party organized by the Japanese Red Cross to honor Sir Frederick Treves (1853–1923), personal physician to King Edward VII, on May 3, 1904, at the Maple Club in Tokyo. (Treves saved the life of King Edward in 1902 with his surgical treatment of appendicitis; he is also famous for his friendship with Joseph Merrick (1862–1890), better known as the “Elephant Man.”)

The guest book for the welcome party was acquired and recently donated to The Huntington by Frank and Toshie Mosher. When Chiba was told about the guest book, he wondered if his great-grandfather’s signature would be inside. In fact, when he was shown the book by Li Wei Yang, The Huntington’s curator of Pacific Rim Collections, he found two signatures by his ancestor. 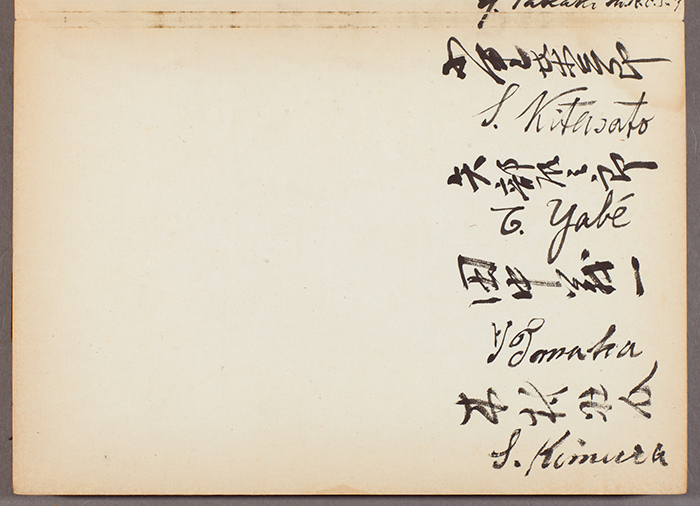 The first pair of Japanese and Roman-letter signatures on page 17 of the guest book belongs to the physician and bacteriologist Shibasaburo Kitasato (1853–1931), Akira Chiba’s great-grandfather, who founded the Kitasato Institute—the forerunner to today’s Kitasato University in Tokyo, Japan. The Huntington Library, Art Collections, and Botanical Gardens.

“One of Kitasato’s signatures was in Japanese characters, and the other one was in Roman letters,” explains Robert Hori, The Huntington’s gardens cultural curator and program director, who facilitated Chiba’s visit. “Like most of his fellow guests, Kitasato signed in two languages, a common practice for people like himself who had studied abroad,” Hori says.

In his memoirs, Treves recounts his meeting with this group of Japanese physicians.

“I also became acquainted with the Japanese Red Cross Society. This business-like organization is the most remarkable and efficient of its kind in the world. During six months of terrible fighting and exposure in a foreign country [Japan was in the midst of the Russo-Japanese war at the time] there was only a fraction of 1 per cent of loss from preventable disease.

In the Boer War 13,250 soldiers died of disease. It may be safe to conclude that the greater proportion of these deaths were due to preventable disease. It is a little distressing to reflect how many lives might have been saved if the methods of the Japanese Medical Service had been adopted by the British Army.” 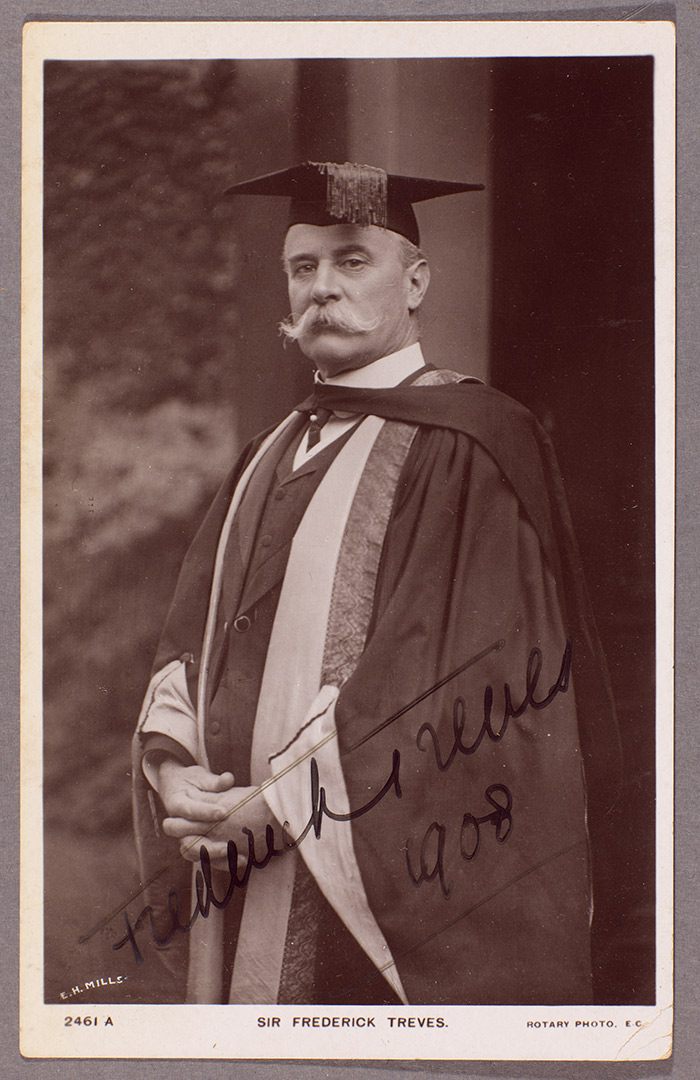 Doctors who had introduced modern medical practices to Japan were now surpassing their Western counterparts in results. The dinner honoring Treves was both a reunion with his students and a celebration of their success.

Commenting on the Library’s remarkable holdings, Consul General Chiba remarked, “Never would I have imagined finding my ancestor here in the collections of The Huntington.”