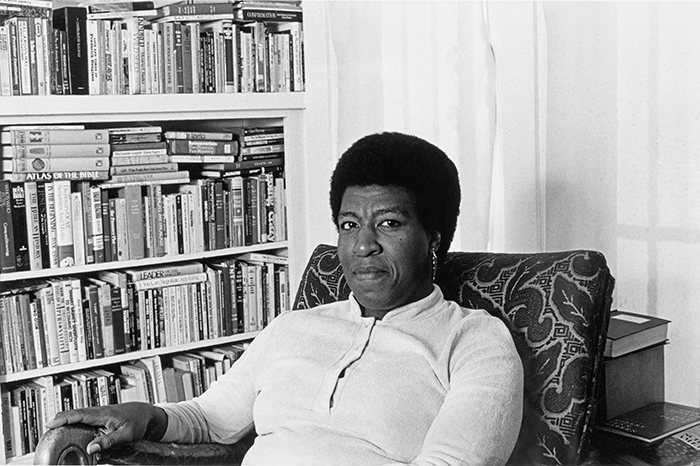 The Huntington is launching the first major exhibition on the life and work of award-winning science-fiction writer Octavia E. Butler (1947–2006), whose literary archive resides here. She was the first science fiction writer to receive a prestigious MacArthur “genius” award and the first African American woman to win widespread recognition writing in that genre. The exhibition, “Octavia E. Butler: Telling My Stories,” opens April 8 in the West Hall of the Library and continues through Aug. 7.

“She was a pioneer, a master storyteller who brought her voice—the voice of a woman of color—to science fiction,” says Natalie Russell, assistant curator of literary collections at The Huntington and curator of the exhibition. “Tired of stories featuring white, male heroes, she developed an alternative narrative from a very personal point of view.” 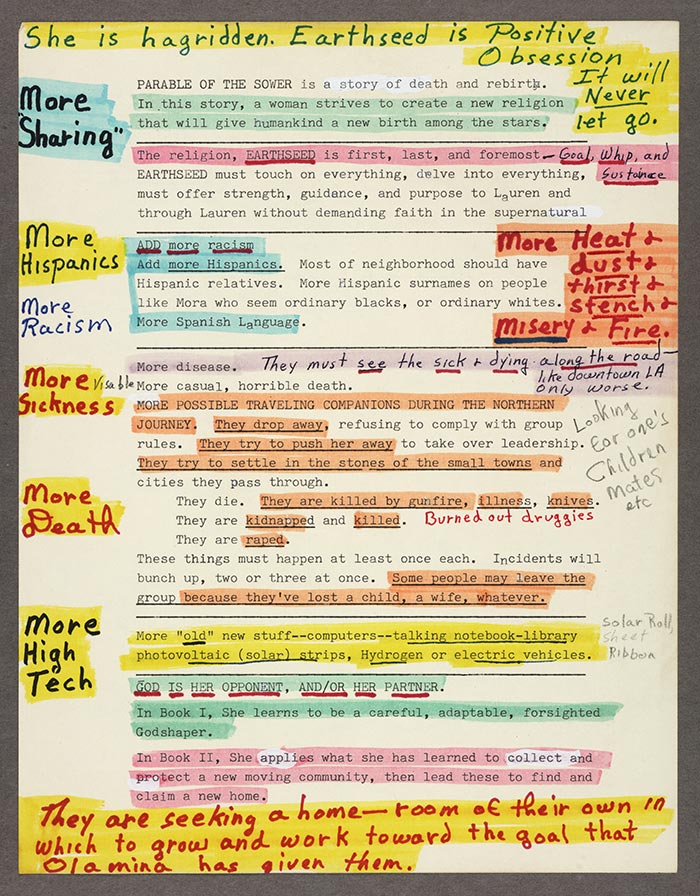 Outline and notes for Parable of the Sower, ca. 1989. The Huntington Library, Art Collections, and Botanical Gardens. Copyright Estate of Octavia E. Butler.

Butler, a Pasadena, Calif., native, told The New York Times in a 2000 interview: “When I began writing science fiction, when I began reading, heck, I wasn’t in any of this stuff I read. The only black people you found were occasional characters or characters who were so feeble-witted that they couldn’t manage anything, anyway. I wrote myself in, since I’m me and I’m here and I’m writing."

The exhibition follows a roughly chronological thread and includes approximately 100 items that reveal the writer’s early years and influences. It also highlights specific themes that repeatedly commanded her attention.

Butler was born June 22, 1947, to a maid and a shoeshine man. Her father died when she was quite young. An only child, she discovered writing very early because it suited her shy nature. (The exhibition features samples of her earliest stories.) But it was a 1954 science fiction film called Devil Girl from Mars that inspired Butler to take on science fiction. “She was convinced she could write a better story than the one unfolding on the screen,” Russell says. 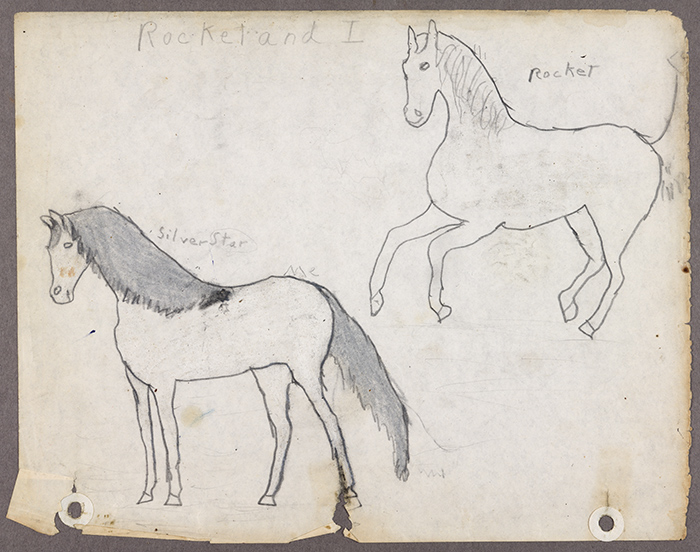 “Silver Star and Rocket,” ca. 1958. This drawing of the equine heroine Silver Star and her friend Rocket is from one of Octavia Butler’s earliest stories. The Huntington Library, Art Collections, and Botanical Gardens. Copyright Estate of Octavia E. Butler.

Butler enrolled in every creative writing course she could find, including classes at Pasadena City College. In the early 1970s, at a workshop for minority writers, she met the science fiction author Harlan Ellison, who introduced her to the Clarion Science Fiction Workshop, where Butler learned to hone her craft among other like-minded writers; it was then that she sold her first story. Following Clarion, she took odd jobs to support herself, writing in the early morning hours before work. But the road to success was long and slow. “I had five more years of rejection slips and horrible little jobs ahead of me before I sold another word,” she once said.

On display in the exhibition is one of the pages of motivational notes she frequently wrote to help herself stay focused on her goals. “I am a Bestselling Writer. I write Bestselling Books . . . Every day in every way I am researching and writing my award winning Best selling Books and short stories . . . Everyone of my books reaches and remains for two or more months at the top of the bestseller lists . . . . So Be It! See To It.” 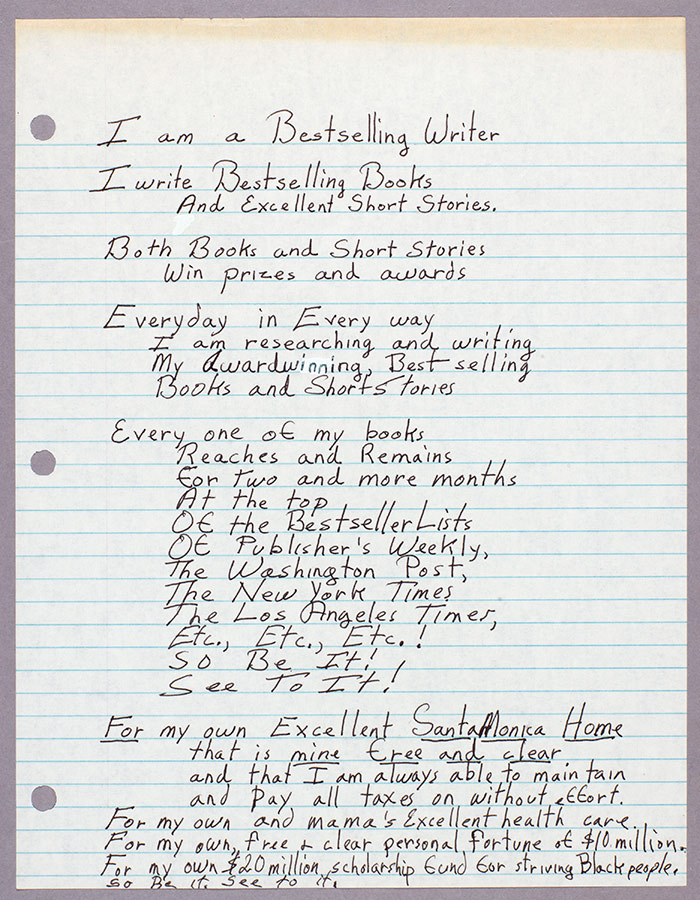 In 1975, she sold her first novel, Patternmaster, to Doubleday, quickly followed by Mind of My Mind and Survivor; the trio comprise part of her “Patternist” series, depicting the evolution of humanity into three distinct genetic groups. A review on display in the exhibition lauds Patternmaster for its well-constructed plot and progressive heroine, who is “a refreshing change of pace from the old days.”

By the late 1970s, she was able to make a living on her writing alone. She won her first Hugo award in 1985 for the short story “Speech Sounds,” followed by other awards, including a Locus and Nebula. 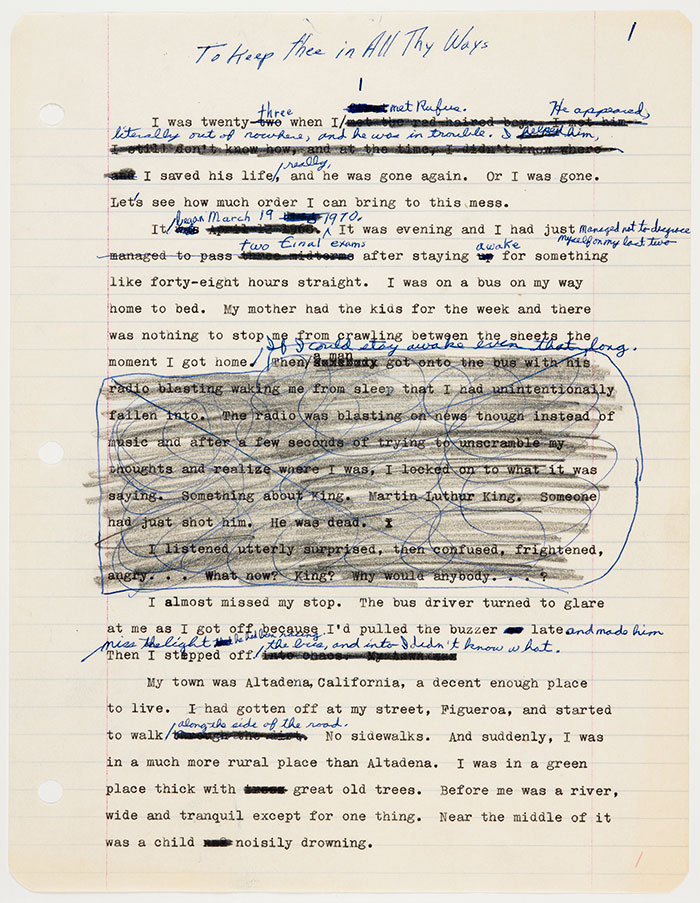 Draft of an early version of Kindred (with the working title To Keep Thee in all Thy Ways), ca. 1977. The Huntington Library, Art Collections, and Botanical Gardens. Copyright Estate of Octavia E. Butler.

The exhibition includes examples of journal entries, photographs, and first editions of her books, including Kindred, arguably her best-known work. The book is less science fiction and more fantasy, involving an African American woman who travels back in time to the horrors of plantation life in pre-Civil War Maryland. “I wanted to reach people emotionally in a way that history tends not to,” Butler said about the book. Published in 1979, Kindred continues to command widespread appeal and is regularly taught in high schools and at the university level, and is frequently chosen for community-wide reading programs and book clubs.

Beyond race, Butler explored tensions between the sexes and worked to develop strong female characters, a hallmark of her writing. But she also challenged traditional gender identity. “Bloodchild,” for example, is a story about a pregnant man, and in Wild Seed, the plot develops around two shape-shifting—and sex-changing—characters, Doro and Anyanwu. The exhibition includes notes Butler made about the two characters as she worked to develop them. 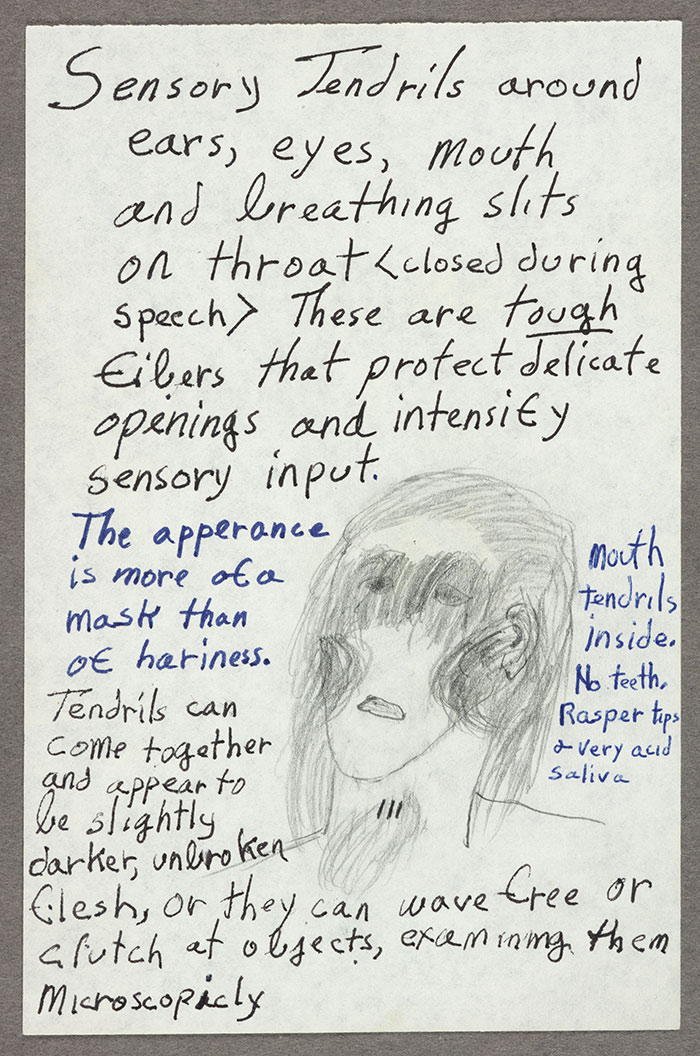 Notes on the Oankali for the Xenogenesis trilogy, ca. 1985. The Huntington Library, Art Collections, and Botanical Gardens. Copyright Estate of Octavia E. Butler.

Butler sought to meticulously research the science in her fiction, traveling to the Amazon to get a firsthand look at extreme biological diversity in an effort to better incorporate biology, genetics, and medicine in her work. Climate change concerned her, as did politics, the pharmaceutical industry, and a variety of social issues, and she wove them all into her writing. “Her stories resonate in very powerful ways today,” said Russell. “Perhaps even more so than when they were first published.”

After Butler’s death, The Huntington became the recipient of her papers, which arrived in 2008 in two file cabinets and 35 large cartons, comprising more than 8,000 items. By the time the collection had been processed and cataloged, scholars were already clamoring for access. In the past two years, the Octavia E. Butler archive has been used nearly 1,300 times—or roughly 15 times per week—making it one of the most actively researched archives at The Huntington. 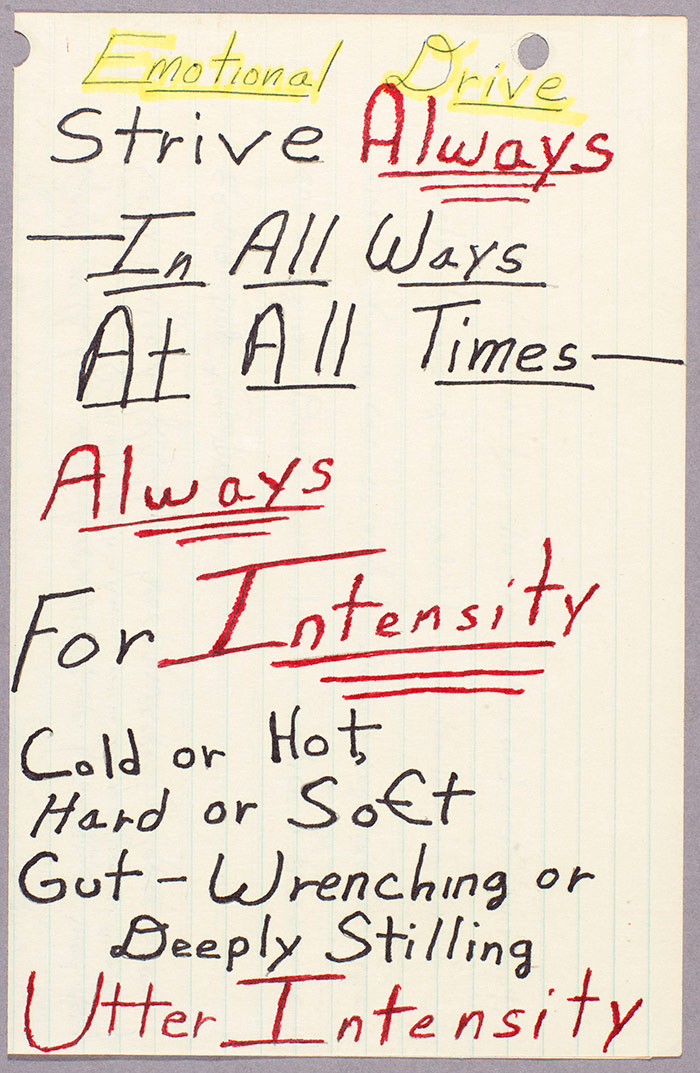 You can learn more about the Octavia E. Butler collection here.