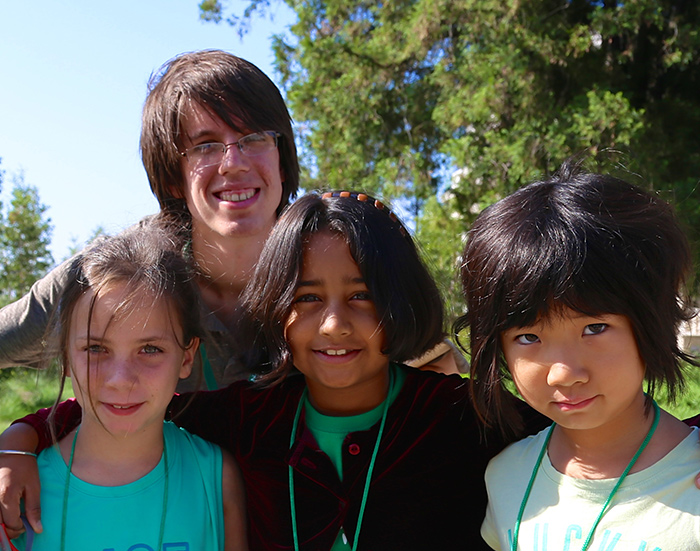 “I feel like I’m the link between the teachers and the kids,” says intern Connell Boken. He participated in Huntington Explorers as a child, and he was back as a classroom assistant this summer. Photo by Miso Kim.

Over the past summer, 18 interns from universities across the country worked with The Huntington’s library, art, and botanical collections.

One of the interns, Connell Boken, is a sophomore at Whitman College in Washington. A Pasadena native, Boken got to know The Huntington by going to its summer program, Huntington Explorers, and then becoming a high school volunteer in The Rose Hills Foundation Conservatory for Botanical Science. This year, he was back in Huntington Explorers as a college intern, being a classroom assistant to groups of children aged 5–12. Boken has many fond memories from the time when he was an Explorer himself 10 years ago. “I feel like I’m the link between the teachers and the kids,” he says. “I was in eighth grade when they were born.” 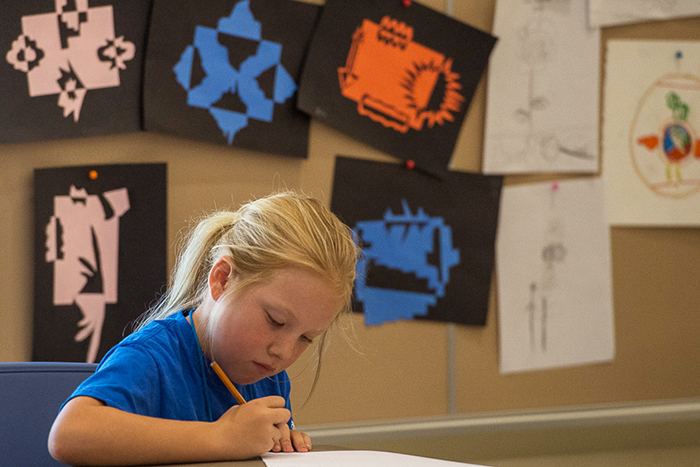 Huntington Explorers is an opportunity for children to use The Huntington’s rich collections as a jumping off point for learning. Photo by Martha Benedict.

At Whitman, Boken is studying the role of gender in paintings and history, with a plan to double-major in history and art history. His dream is to one day become a museum curator. Boken was impressed that even young children could appreciate the knowledge he shared with them about the artworks in the galleries. “When I told them that an 18th-century English painter, Joshua Reynolds, was the president of the Royal Academy of Arts, they found that interesting. They were curious to hear more.” He wonders if any of the children will one day follow in his footsteps and be interns in the Explorers program, or even become teachers.

Another intern, Courtney Buchkoski, worked in the Library with Peter Blodgett, the H. Russell Smith Foundation Curator of Western Historical Manuscripts at The Huntington. Buchkoski is in a Ph.D. program in history at the University of Oklahoma. She’s writing her dissertation on immigration aid in society, with a focus on the 19th-century American West and its intellectual history. Buchkoski worked with Blodgett to prepare a subject guide for Huntington materials about the Chinese in the American West. Such guides are among the many documents that libraries use to help researchers find relevant sources. 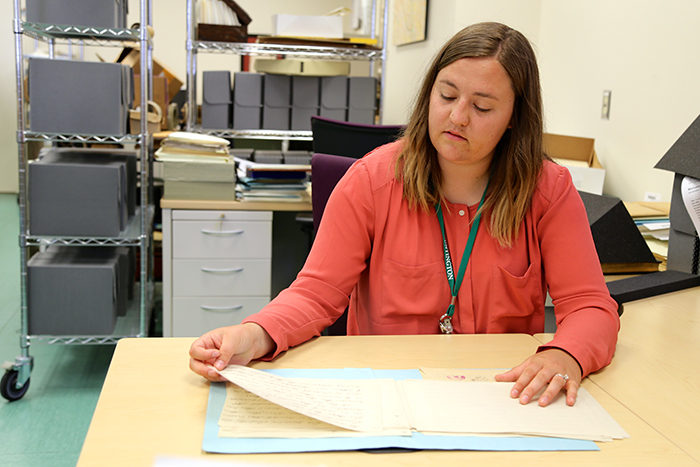 Intern Courtney Buchkoski worked in the Library with Huntington materials related to the Chinese in the American West. Photo by Miso Kim.

One document made a particular impression on her. A 31-page manuscript, penned by an unidentified woman in 1855, touches on several aspects of California history, including the presence of the Chinese in San Francisco. At some points in the speech, the woman describes the Chinese in unfavorable terms, but then she seems to catch herself, saying “I am in favor of the Chinese,” for “the Chinese are neither better nor worse than ourselves.” By the end of the manuscript, she conveys her wish that she could do something about their plight but feels powerless: “I am only a woman, obliged to pay taxes, but not allowed to have a voice in the government of the republic.”

Buchkoski found the letter particularly noteworthy because it spoke to issues still unresolved today. “There are always people who think through the logic of racism and realize the truth, that racism is illogical. You can see the seed of change in this woman's words.” 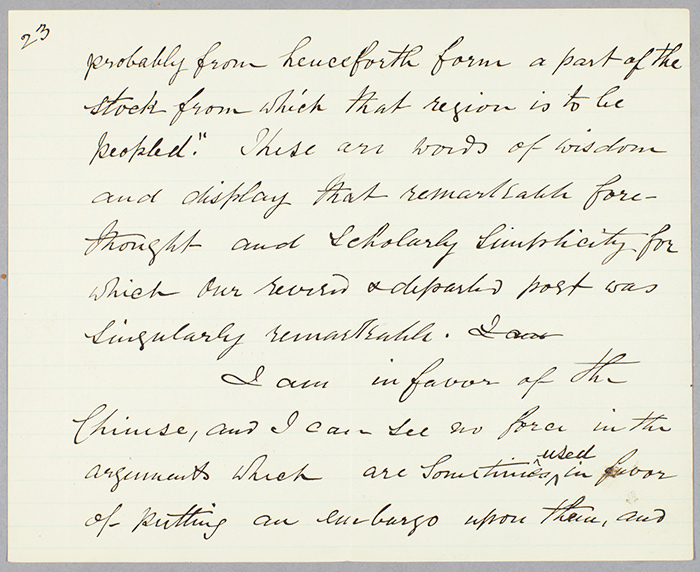 This 1855 text by an unidentified woman offers perspectives on California history, including the presence of the Chinese in San Francisco. The Huntington Library, Art Collections, and Botanical Gardens.

Both Boken and Buchkoski felt that their experiences as interns will influence their future academic careers. Boken treasures his experiences with the children in Explorers and what he learned about keeping things interesting for them. “This internship will help guide my future goal of becoming a curator,” he says. As for Buchkoski, having a real-world experience in a research library gave her a sense of just how immense the resources are behind the scenes. “If you look online at an archive’s collection, it’s 1/100 of what actually exists. I was so happy to do my small part in making the collections more accessible.”

Miso Kim served as an intern in the office of communications and marketing at The Huntington.

Volunteering to Decipher Paul Conrad
Mar. 7, 2016 by Natalie Russell
2 Comment(s)
Meet Huntington volunteer Dennis Harbach. Over the past two years, Harbach has laughed, cried, and winced his way through the gargantuan task of producing searchable metadata for the satirical cartoons...
More

A Prairie Boy’s Passion for Bonsai
Sep. 11, 2015 by Lisa Blackburn
0 Comment(s)
The irony doesn't escape Ted Matson. Raised on the prairie of North Dakota, without a tree in sight, the one-time farm boy followed a path in life that led to a full-time career in bonsai. That path also...
More