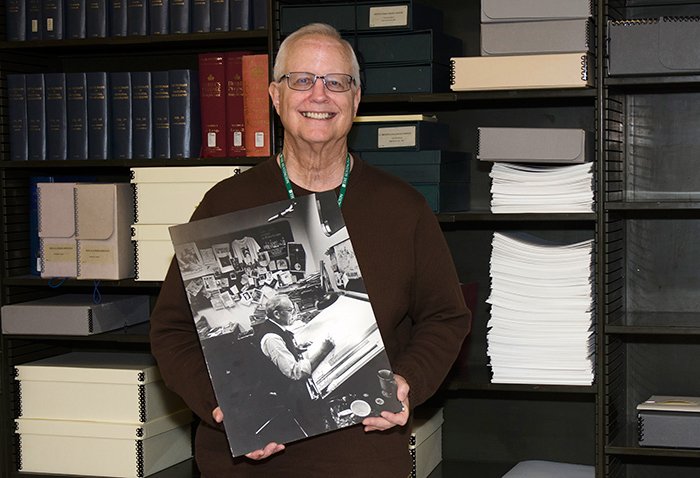 Dennis Harbach, volunteer at The Huntington, holds an image of the cartoonist Paul Conrad at his drawing board. Harbach produced searchable metadata for the satirical cartoons in the Paul Conrad papers. Photo by Lisa Blackburn.

Meet Huntington volunteer Dennis Harbach. Over the past two years, Harbach has laughed, cried, and winced his way through the gargantuan task of producing searchable metadata for the satirical cartoons in the Paul Conrad papers.

Paul Conrad served as chief editorial cartoonist for the Los Angeles Times from 1964 to 1993 and then continued cartooning independently until his death in 2010. Known for his rapier wit and stinging observations, he tackled politics on every level, winning three Pulitzer Prizes during his career.

The Huntington acquired Conrad’s remarkable personal papers as a gift in 1993, and additional material has been donated in subsequent years. The collection includes awards, hate mail, sketches, and, most importantly, more than 9,500 original cartoons. The cartoons provide visual and written commentary on five decades of culture and history, ranging from acerbic condemnations to laudatory celebrations—focusing on Los Angeles, but also on California, the United States, and even abroad. The collection was catalogued chronologically, with no comprehensive list, limiting access to its content. Enter volunteer Harbach. 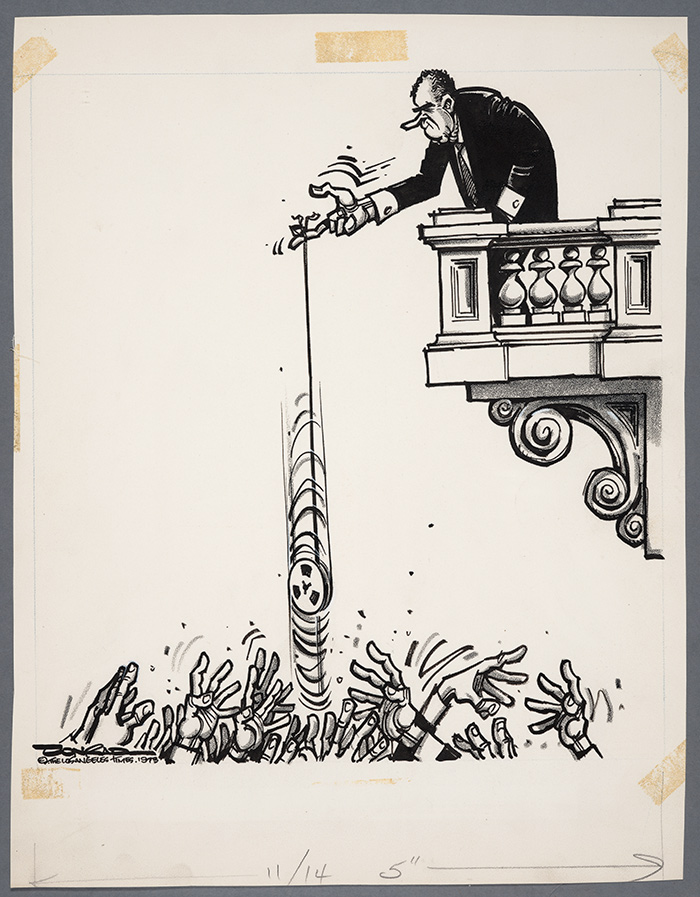 Harbach was a perfect fit for making sense of this vast collection. “I always read Conrad’s cartoons and greatly admired his razor-sharp sense of humor, political insights, and personal tributes,” says Harbach. In addition, Harbach was no stranger to many of the political personalities Conrad had lampooned, having worked for the City of Los Angeles for 30 years, ultimately retiring as the director of Human Resources at the Department of Public Works. He was uniquely suited to recognizing caricatures and events, both prominent and obscure.

So we set him to the task of capturing metadata about the cartoons—giving us invaluable information to populate a database, including dates, titles, names of images, subjects, and identifying numbers. The result is a precious resource that allows staff and researchers to locate items of interest. (The completed database is currently accessible to Library staff only.)

I asked Harbach about some of his favorite cartoons. With so many to choose from, it was hard for him to narrow down his choices. He did note the fabulous caricatures of presidents Richard M. Nixon and Ronald Reagan. Conrad was known to say that his greatest achievement was being named to Nixon’s infamous “enemies list.” 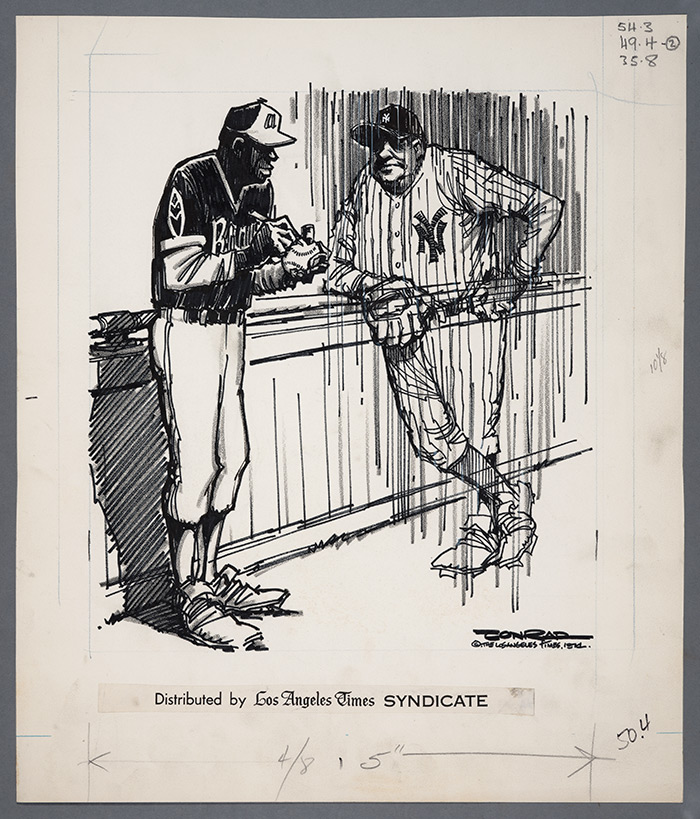 A favorite cartoon for sports fans might be the one of Hank Aaron autographing a ball for the ghost of Babe Ruth, after Aaron broke the Babe’s homerun record in 1974.

Harbach also appreciated Conrad’s touching tributes, “almost more than his funny stuff.” One that Conrad created a few weeks after the September 11 terrorist attacks depicts firefighters drawn to resemble the U.S. Army troops in the popular HBO World War II miniseries Band of Brothers. A note (in Conrad’s hand) on a copy of the cartoon indicates that he had sent the original to some New York City firefighters. This gesture provides a telling glimpse into the heart of a man so evidently passionate about the world. 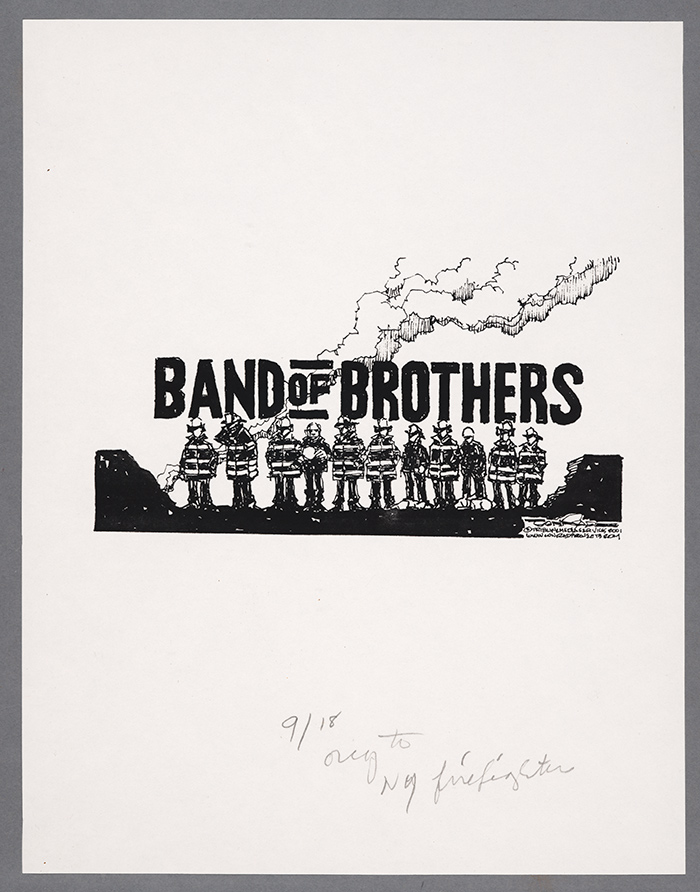 Firefighters depicted as the troops from Band of Brothers. Paul Conrad papers. The Huntington Library, Art Collections, and Botanical Gardens.

There were also pointed cartoons, such as the one from 1993 commenting on the controversy about gays in the military. The image depicts the Vietnam Veterans Memorial wall, with the names of “gays” listed separately from “straights.” Harbach felt that one was a real “gut puncher.” Gut punching was perhaps what Conrad did best. He angered some and delighted others, but he was sure to elicit a reaction either way.

“One of the things I enjoyed most about this task,” says Harbach, “was going through history again—because I lived it.” Although there were more than 9,500 cartoons in the collection, Harbach never got bored. “Conrad’s work is so interesting and humorous. It was like reading a long, but great, book.”

Knowing that researchers and staff now have better access to Conrad’s work is an added bonus. “It gives me a great feeling of accomplishment,” says Harbach. 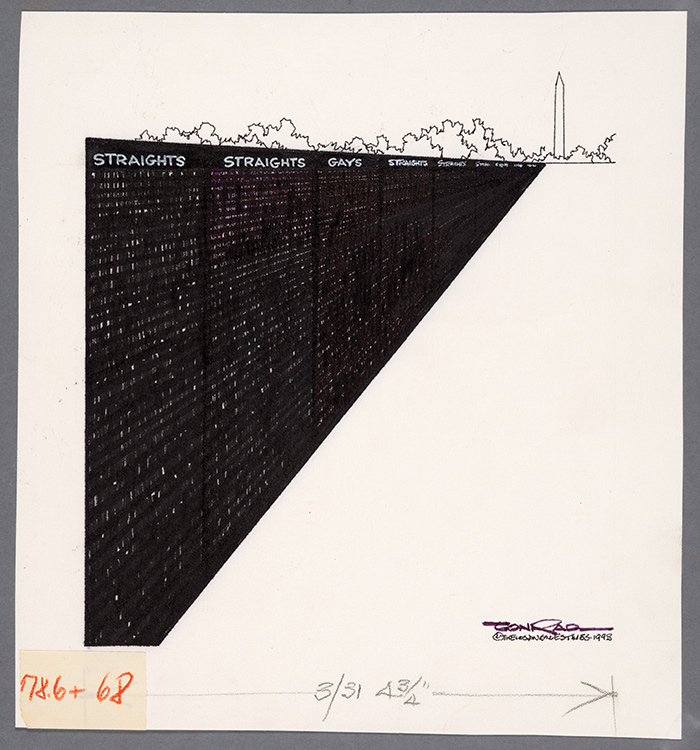 Gays in the military on the Vietnam Veterans Memorial. Paul Conrad papers. The Huntington Library, Art Collections, and Botanical Gardens.

Natalie Russell is The Huntington’s assistant curator of literary manuscripts.

Thank you for Natalie Russell's "Volunteering to Decipher Paul Conrad" (3/7/16). Have you any information as to when (or whether) the Conrad cartoons will be accessible online?

Hi, Richard. We reached out to a curator about your question. She said, "Digitizing the Conrad drawings is definitely something we want to accomplish, and it’s on our radar, though we are not sure when this might happen. There is a queue of candidate collections and items waiting to be digitized."