A Prairie Boy’s Passion for Bonsai 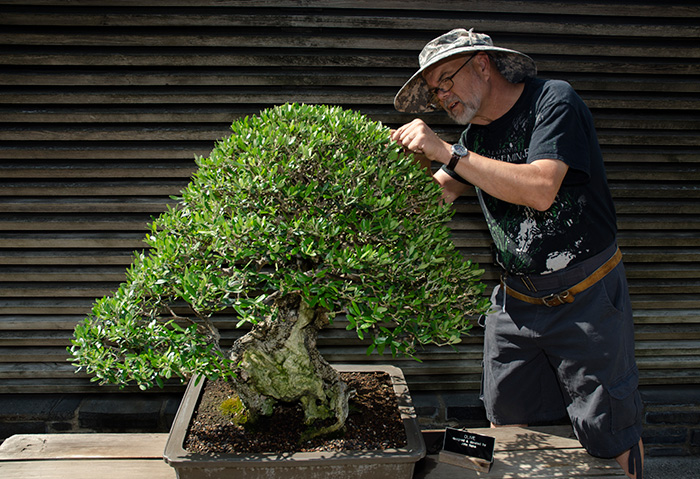 The irony doesn’t escape Ted Matson. Raised on the prairie of North Dakota, without a tree in sight, the one-time farm boy followed a path in life that led to a full-time career in bonsai. That path also led him to The Huntington, where Matson joined the staff in February (after several years as a consultant) to oversee the more than 400 miniature trees that make up the bonsai collections. About 70 trees, designed by masters of the art form, are on display at any given time in the Bonsai Courts of the Japanese Garden.

“I loved sculpting as a kid,” Matson said on a recent morning in the garden, as he tended a venerable olive tree designed by legendary master John Naka that presides over the entrance to the courtyard. “Then one day in the 1970s, a book about bonsai caught my eye in a San Francisco bookshop. The philosophy intrigued me: bonsai is essentially a form of sculpture with living plant material. I went right out and bought my first tree, a Japanese quince. When it bloomed, I was hooked.”

He snipped a few stray olive leaves as he talked. He stepped back to survey his work, then snipped again. A sculptor with scissors. 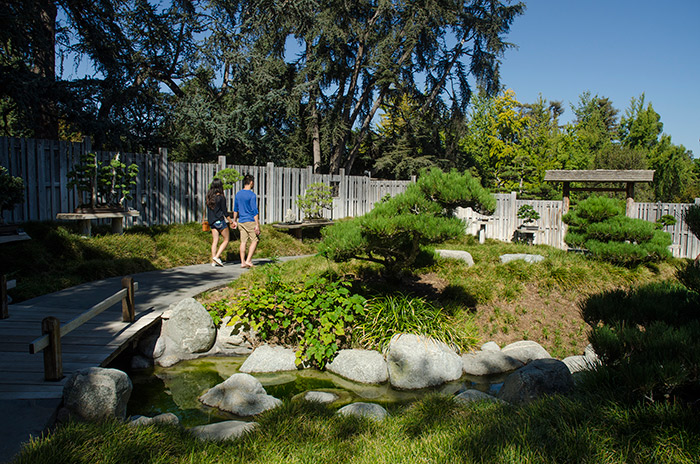 More than 400 miniature trees make up the bonsai collections at The Huntington. About 70 trees, designed by masters of the art form, are on public display in the Japanese Garden’s Bonsai Courts. Photo by Lisa Blackburn.

After his epiphany in the bookstore, Matson promptly joined a bonsai club and began taking classes in the horticultural art, learning how to train, prune, and shape a tiny tree into the desired form—a painstaking process that takes years of patient nurturing, often starting from rootstock that can seem little more than a stump. After moving to Southern California, he studied with Naka and other leading masters such as Melba Tucker, Ben Suzuki, and Warren Hill. In the late 1980s, Matson started teaching classes of his own. His day job as a freelance writer couldn’t have been more different from his horticultural passion. “Bonsai was a great way to de-stress and to clear my head. Whenever I was blocked on a writing project, I’d go out into the yard and walk among my trees. The creative juices would start flowing again within minutes.”

In 2008, Matson turned to bonsai full-time. Today he maintains a busy teaching schedule, traveling around the country to share his expertise in classes, workshops, and at bonsai conventions. Expanding educational outreach at The Huntington is also high on Matson’s list of priorities. Like any passionate practitioner, he has a keen desire to share his enthusiasm and introduce a new generation to the art form. To that end, he is recruiting and training bonsai volunteers (even beginners are welcome), planning an apprenticeship program, and offering classes for both children and adults. Among his most popular sessions is an intensive, four-day bonsai gakko, or academy, at The Huntington. His next bonsai academy begins Oct. 10 and extends over two weekends. 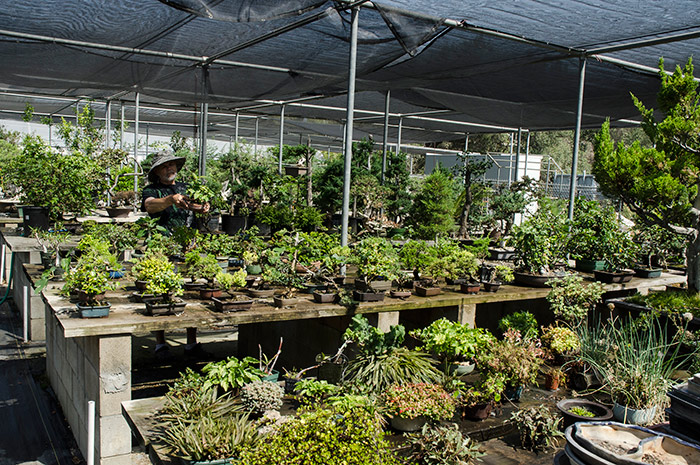 The quality of the bonsai collections at The Huntington appeals to prospective donors, who know their trees will be well cared for. In the nursery area, Matson checks on a group of donated shohin bonsai (trees less than 8 inches tall). Photo by Lisa Blackburn.

Matson has also been hard at work for the past three years, in collaboration with noted bonsai artist Ryan Neil, rejuvenating a dozen special trees in the collections that needed extra care to restore their health, shape, and structural integrity. Many mornings will find him in the bonsai nursery area, where row upon row of workbenches are covered with specimens large and small—many of them recent donations. The collections are quite diverse, including traditional Japanese black pine, maple, elm, and ginkgo; California native juniper and oak; and Mediterranean species, such as olive and pomegranate. In addition to The Huntington’s own bonsai collection, Matson oversees the collection of the Golden State Bonsai Federation’s Southern California chapter, which is also housed here. He served as the foundation’s president in 2008–09.

“The quality of the collections, and the degree of care we can provide them here, is very appealing to donors who want to make gifts,” he noted. “People know their trees will be well cared for.” 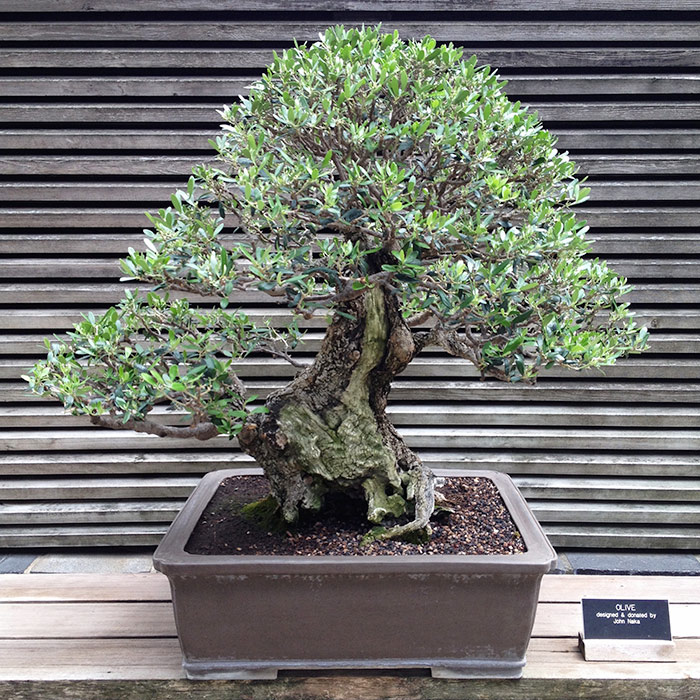 John Naka’s olive tree, donated to The Huntington in the 1990s, has been selected for display in the Artisan’s Cup exhibition at the Portland Museum of Art, which will be held Sept. 25–27. Photo by Lisa Blackburn.

John Naka’s olive tree, donated in the 1990s, is one of many legacy trees in the collections. Its massive, rugged trunk and twisted branches suggest great age and weathering—highly desirable qualities in bonsai. “This tree has been cultivated as bonsai for 60 years, but the original stock is well over a century old,” said Matson. “It was collected from an olive ranch in Fontana, and from the size and condition of the original heartwood core, it had to have been growing there for at least another 40 or 50 years.” Deeply rooted in the traditions of an ancient Asian art form and the rich soil of Southern California history, the tree speaks eloquently to the horticultural heritage of the region and to the unique vision of Naka, who devoted decades to its creation.

The olive tree will be taking a brief road trip this fall in support of a cause that’s close to Matson’s heart, and that Naka himself would have approved: promoting bonsai in the mainstream art world. The specimen has been selected for display in the Artisan’s Cup exhibition at the Portland Museum of Art, which will be held Sept. 25–27. The juried event is designed to showcase the highest levels of bonsai artistry from across the country and gain global recognition for bonsai as a true art form. The process of creating bonsai, event organizers say, is “an ongoing collaboration between humans and nature.” And Matson will be the first to tell you how rewarding that collaboration can be.