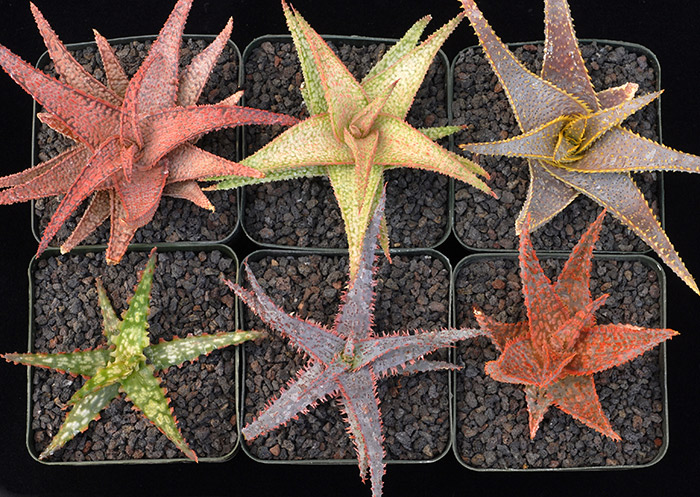 Zimmerman’s kind of six-pack: half a dozen aloe hybrids. On the bottom left is a young Aloe ‘Gargoyle’; on the bottom right is Aloe ‘DZ’. She’s waiting for the others to develop before she decides whether they merit a cultivar name. Photo by Karen Zimmerman.

When it comes to aloe collecting, Karen Zimmerman’s hybrids are real show-stoppers. As The Huntington’s propagator of succulent plants, Zimmerman has had amazing success breeding striking, jagged-toothed specimens permeated with red, orange, or yellow that produce delectable contrasts with the aloes’ green to bluish-green leaves. Take her Aloe ‘DZ’. A virtual sunburst of color, the elongated greenish leaves are studded with raised red ridges and tiny, distinctive red teeth along their edges. Or Aloe ‘Jeff Karsner’, named in honor of the late Jeff Karsner, who served as the head gardener in The Huntington’s Children’s Garden. A riot of colors, the rosette of this aloe—which grows to six or more inches—has bluish leaves, red and white striations, and deep-red, trapezoidal teeth on its margins. Collectors are sometimes caught off guard when they first encounter one of these so-called “fantasy aloe hybrids” and realize they’ve just fallen head-over-heels in love. That’s what happened to Zimmerman. She was fond of aloes but hadn’t paid particular attention to their hybrids. Then noted plant breeder Kelly Griffin donated a couple of his aloe hybrids to an auction at The Huntington’s 2002 Succulent Symposium, and Zimmerman’s professional life changed course. 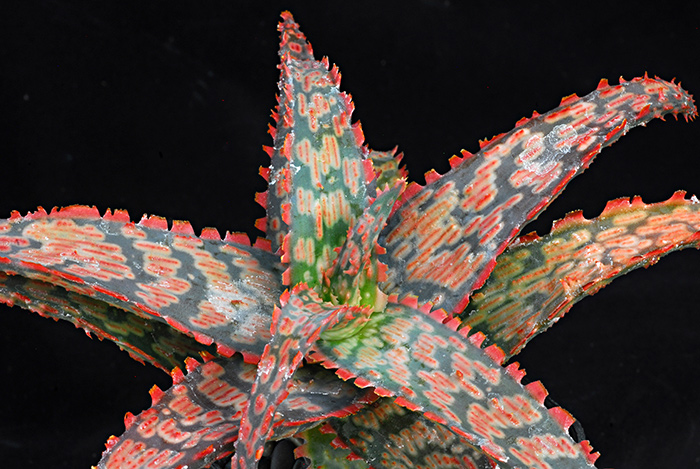 Colorful and playful, Aloe ‘Jeff Karsner’ is named after the late head gardener of The Huntington’s Children's Garden. Photo by Karen Zimmerman.

“I was absolutely gobsmacked!” she recalled. “The teeth and colors he got were amazing. I wanted to try my hand at it.” Zimmerman likens creating aloe hybrids to making living sculptures. She breeds her plants for "toothiness," a term that refers to the sharp spikes that are one of the plant’s signature characteristics. She aims for teeth both on the margins and the surfaces of the leaves, as well as luminous colors. And while aloe flowers are nice, colorful aloe leaves can be enjoyed all year long. “You can’t get too much color,” she says. One of Zimmerman’s dreams is to breed a tree aloe with leaves that blush bright red with many long red or yellow teeth. (Trying to picture a tree aloe? If you’re walking from the Library toward the Desert Garden, you’ll see several towering examples of Aloe bainesii to the left of the path. Nearby are some of The Huntington’s 200 other aloe species, mostly from southern Africa.) To generate a hybrid, Zimmerman takes the pollen from one aloe—using the tip of her finger or a pencil—and applies it to the stigma of another. She tags the flowers with relevant information, including the seed and pollen parent, the date, and how many flowers she’s pollinated. Then she waits for the pods to ripen, collects the seeds, and grows them to see what she’s bred. 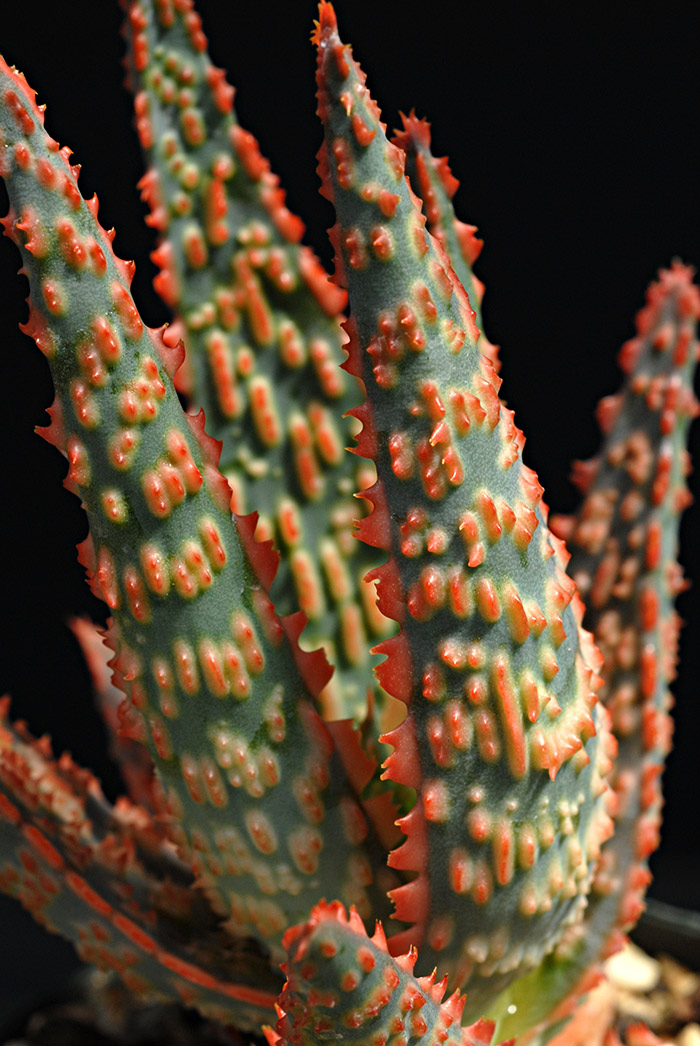 She applies a cultivar name—for instance ‘DZ’ or ‘Jeff Karsner’—only to the plants that achieve the characteristics she’s after. Often, if a plant merits a name, it’s distributed through The Huntington’s International Succulent  Introductions (ISI) program. Started in 1958 and incorporated into The Huntington in 1989, ISI propagates and sells new or rare succulents to collectors, nurseries, and institutions. Income earned from sales supports the program. So far, Zimmerman has developed nine aloe hybrids for ISI. Introducing a plant into the program requires a starting crop of roughly 100 to 200 specimens. Using traditional methods, the process could take a decade or longer. But since 2008, The Huntington has used its on-site tissue culture lab to shorten the span to a year or two. When Zimmerman breeds a winner, she now hands over a part of her plant to the tissue lab. Technicians mass-produce the plant for distribution, often using a very early inflorescence (or flower stalk) before it starts to bud instead of dissecting the plant itself. The result is identical to what one would get using traditional propagation methods. If you like what you see in these images, why not join Zimmerman for “Aloes on My Mind: Exploring Aloe Hybrids One Generation at a Time,” a talk she’s giving on Thursday, March 12, at 2:30 p.m. in the Ahmanson Room of the Brody Botanical Center. A plant sale follows the talk. Free; no reservations required.

Hi Alan. You can purchase Karen's aloes through the International Succulent Introductions program. You'll find ordering information on their website or you can send an email to [email protected]. Thanks for your interest!

I like all the six of the first picture. I live in Chile. Is it possible to send them. How much would it cost, including postage?

Hi, Ingrid. Thanks for your interest in the aloes — aren't those beautiful? The best place to find out about purchasing and whether they can be shipped internationally is the International Succulent Introductions program, which you can email at [email protected]. There is also some information on ordering on their website.

Wow! These aloe hybrids are absolutely magical! My mother is crazy about succulents and her balcony is turned into a small succulent wonderland. These aloe plants would be a great surprise for her! Thank you for this article!

Is the Aloe Jeff Karsner available? As one who knew Jeff, I am very interested in this variety, having heard about it last year.

Amazing Aloe Hybrid, very beautiful with those color. I love the top right one with yellow shark. I live in Thailand, can i buy this abroad? Maybe it's seed. I try to enter website suggest in early comment but it's nothing but error.

What is the one on the top right with yellow teeth called???

Hi Sophia! This hybrid is now in tissue culture and I'm hoping will be available in 2021. When it is ready, it will be on our ISI (International Succulent Introductions) list, which is offered every year, in May or June. I'm happy you like it!

Thanks for the reply, Karen. It's so gorgeous! I still have my eye out for it. : ) Hope it's available soon!! Gorgeous plants!