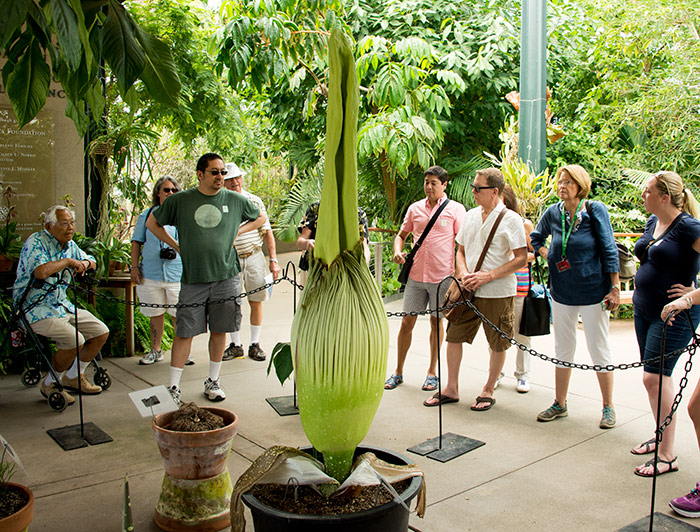 This shot from earlier today shows the relative size of the plant.

The newest flowering of the titan arum (Amorphophallus titanum, or "Corpse Flower") at The Huntington has generated good questions about the origin of this plant at our institution. This wonder of the vegetable kingdom has now flowered for us five times, including 1999, 2002, 2009, 2010, and the latest this year. 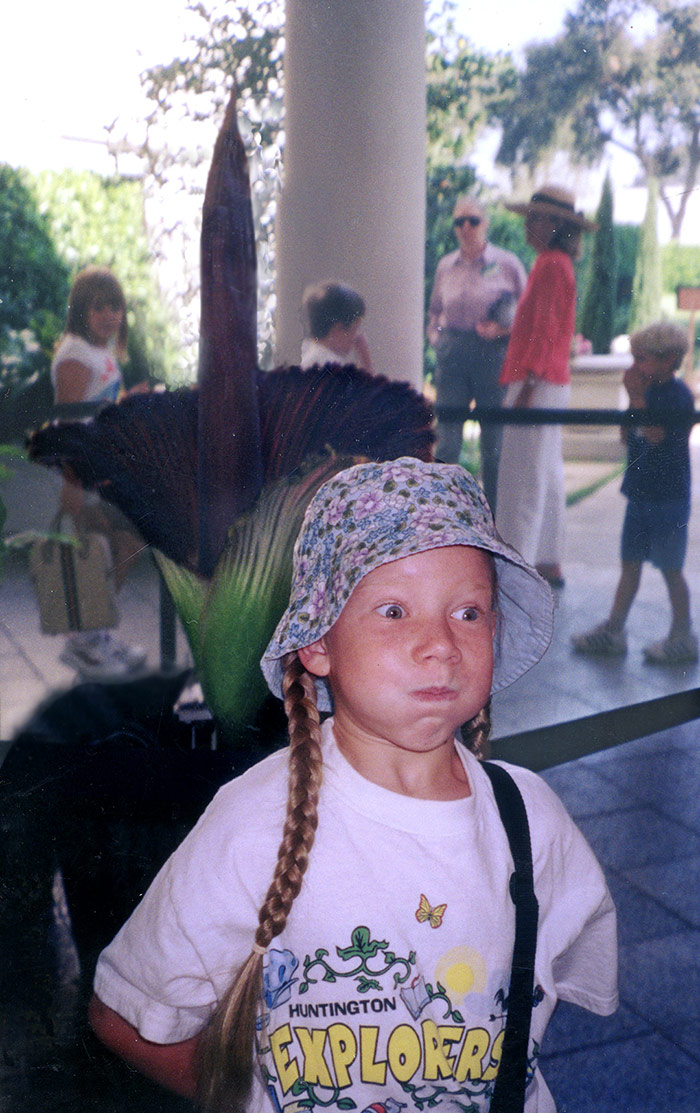 This iconic photo of a visitor from 1999 says it all.

The first bloom, in 1999, caused the greatest sensation of all five events for visitors and staff alike. It was obtained in March of that year from longtime friend of the gardens, Dr. Mark Dimmitt of Tucson, Ariz. Mark in turn had obtained it from the Index Seminum of the Palmengarten in Frankfurt, Germany. This plant was given the accession number 85000, which means it’s the 85,000th plant to be recorded in The Huntington’s living collections. This reference number makes it easier to distinguish it from our other titan arums.

In 2002 we were treated to a second blooming of 85000. This helps answer the question “When will it bloom again?” This species has been known to bloom in successive years and also to delay a subsequent flowering for 10 years or more. A variety of factors are involved in this “decision” by the plant to flower. Size is not an absolute criterion since the current (2014) plant has a cormthat weighs only about 30 pounds, while corms have been recorded weighing upwards of 300 pounds. It is safe to say that the larger the corm, the larger the inflorescence, or “flower” (For more on this see my note at the bottom of this post.)

The flowering in 2009 was unusual in several respects. This plant, one of a batch assigned the number 87333, was grown from seeds produced from the 1999 flowering. John Trager, curator of desert collections for The Huntington, found a way to manipulate the anthers to obtain pollen and hand-pollinate the female flowers of the same inflorescence. Ordinarily the female flowers would be past their receptive stage when the pollen is shed by the male flowers, a mechanism that helps ensure out-crossing and genetic diversity in wild populations of titan arums. This successful “selfing” resulted in a number of vigorous specimens and gave rise to two flowering events. 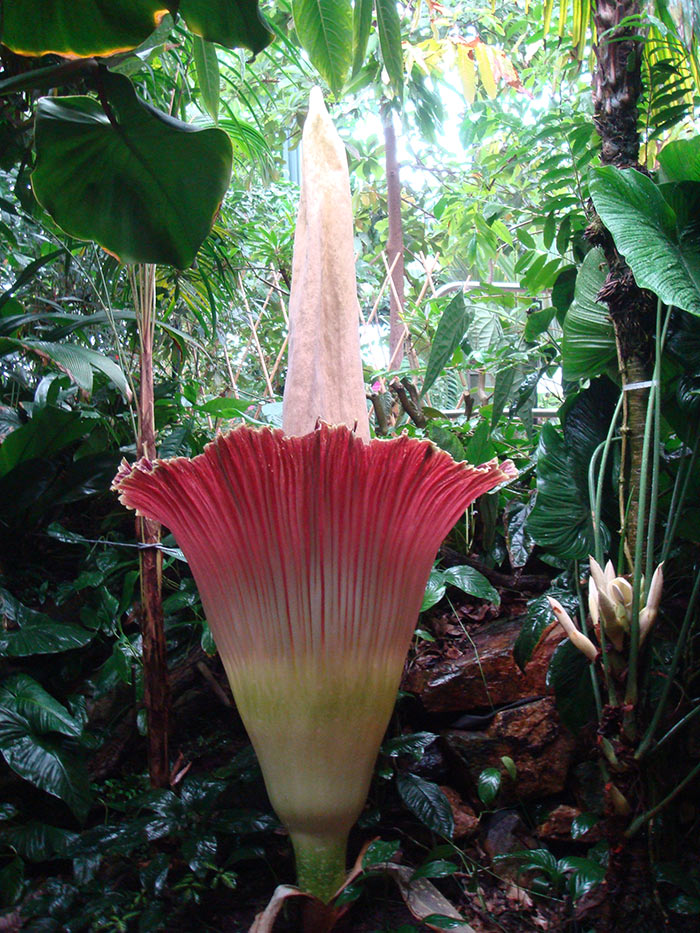 The 2009 bloom put on quite a colorful display.

The inflorescence of the 2009 blooming was preceded by a very large leaf: the leaf stalk (petiole) was about 12 feet tall and about 10 inches in diameter. This leaf remained viable for a year and a half. The size and vigor of a leaf can be an indication of flowering capacity. Besides being the result of self-pollination, this plant was also unusual in that it was planted in an open bed in The Rose Hills Foundation Conservatory for Botanical Science here at The Huntington. This allowed the root system to develop freely and help the corm store up more energy than it might be able to in a pot. This placement also provided a scenic venue resembling its forest habitat in Sumatra. After a leafless dormancy of a few months, this plant pushed up an inflorescence nearly seven feet tall, the largest of the five blooms at The Huntington.

The flowering in 2010 was also produced on a plant growing in the ground in the conservatory. Its inflorescence was much smaller, probably owing to root competition from a nearby fig tree. This plant is one of a crop of seedlings grown from a cross between a plant at the University of California, Santa Barbara (the female parent) and pollen from 85000 (the male parent). This group was given the number 89999. On The Huntington website there is a photo sequence showing the early to late stages of this plant’s flowering. Of the several dozen plants of A. titanumin our collections, most are from this cross.

The current flowering titan arum is a sibling of the plant that flowered in 2009. It also bears the number 87333 but with a different clone or individual designation.

Other titan arums in The Huntington’s tropical collections are expected to reach flowering size in the next few years. We hope to be able to offer a display of several plants flowering simultaneously that will delight and amaze visitors sometime soon. 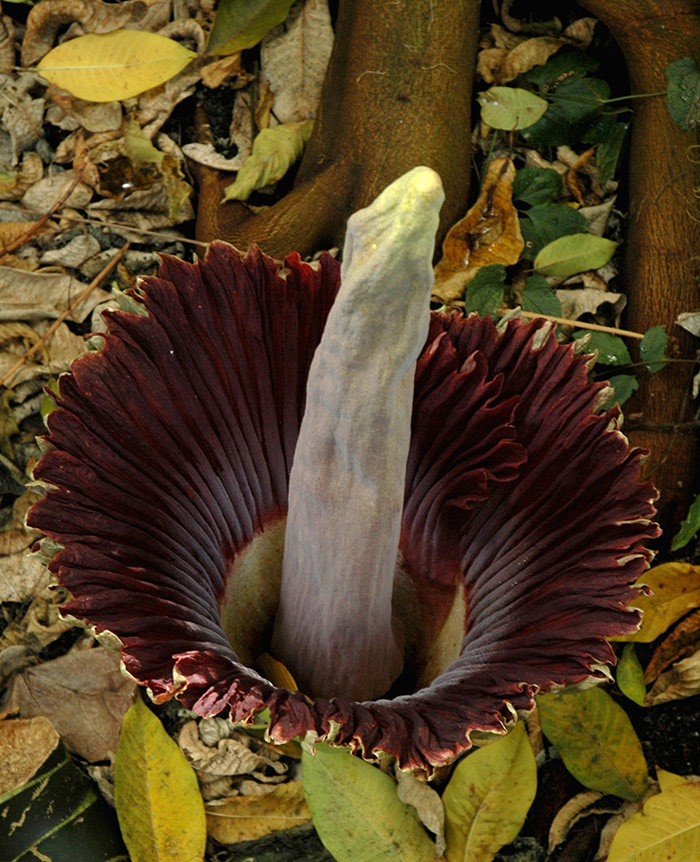 The “flower” of the titan arum is actually an inflorescence comprised of an outer whorl, or bract (the spathe), with a flower-bearing axis (the spadix) at the center. The spathe and spadix construction is common to all members of the Araceae, or aroid family. The longest portion of the spadix, from the tip downward, is the appendage, a nearly hollow structure that resembles a loaf of French bread. Below the appendage is a zone of male flowers, and below this are the female flowers. Technically, A. titanum has the most massive unbranched inflorescence of any flowering plant; other plants have a much larger inflorescence (e.g., the Talipot Palm, Corypha umbraculifera) that is branched, or an unbranched structure that is taller (e.g., some aloes and agaves).

Dylan P. Hannon is curator of conservatory collections at The Huntington.

I have a one of these plants for over 50 years. We plant it outside in the spring and take the bulb(s) up in the fall when the leaves die. We live in Indiana and have found that if we leave the bulbs in the ground they will not come up the next year unless they were planted very close to the house where they received warmth from the building. The bulbs have bloomed several times over the years and it has always been over the winter while the bulbs are out of the ground. When it bloomed it would have a stalk that is about 3 feet tall and then a flower the is about a foot tall on top of the stalk. The stalk would grow 3 to 4 inches in one day and the bloom would last only a few days and would only smell for the last few days. Our bulb as about 6 inches in diameter and it seened like it only bloomed every 5 to 7 years.