The Posters to End All Wars 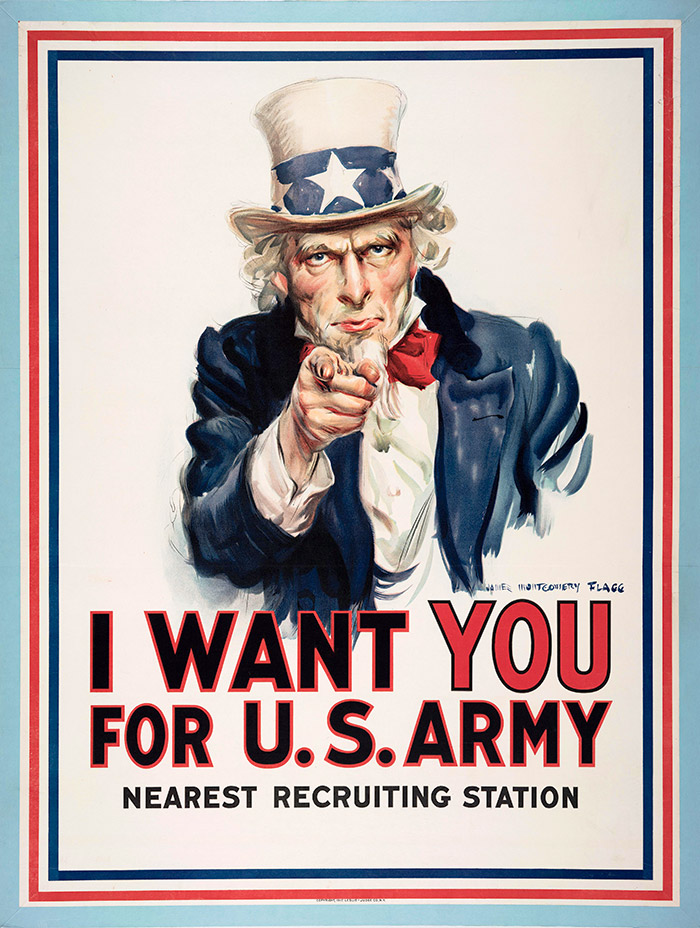 I Want You for U.S. Army is one of about 40 posters that will go on view beginning Aug. 2 in “Your Country Calls! Posters of the First World War.” The poster was made in 1917 by James Montgomery Flagg (1877–1960). The Huntington Library, Art Galleries, and Botanical Gardens.

World War I marked the beginning of modern warfare, the collapse of empires, and the passing of ordered societies in which everyone knew their place. The Great War, which started July 28, 1914, was also a seminal moment in which graphic arts converged with patriotic fervor to arouse all citizens to action. “Your Country Calls! Posters of the First World War” brings together 40 international examples from The Huntington’s collection, including the most famous American recruiting poster of all time: Uncle Sam pointing at the viewer and saying, “I Want You for U.S. Army.” The exhibition opens on Aug. 2 to coincide with the week's 100th anniversary of the start of the war. 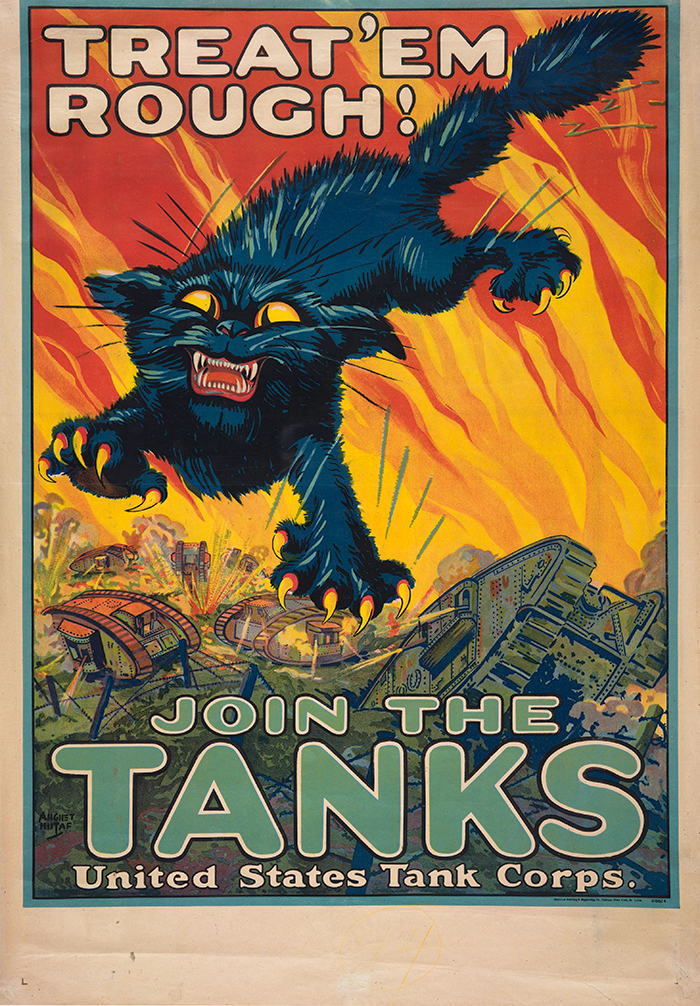 Poster art had been used earlier to rally support for causes, but as David Mihaly, Jay T. Last Curator of Graphic Arts and Social History for The Huntington, observes, “What is new is the organized, mass distribution of posters during World War I.” Government agencies and private charities in combatant countries raised a volunteer army of artists, most very well known, to produce designs—startling in their variety—that were seen everywhere people looked: on walls, in windows, on public transportation, and in popular magazines. Messages urged not only enlistment, but service on the home front, including investment in the war effort and humanitarian aid.

I Want You for U.S. Army was designed by celebrated illustrator James Montgomery Flagg, who adapted his 1916 Leslie’s magazine cover for the iconic message and used himself as a model for Uncle Sam (the Roman nose is the giveaway). “Like many, I thought this poster originated in World War II,” says Mihaly. It was so effective that it served active duty in the Korean and Vietnam Wars. 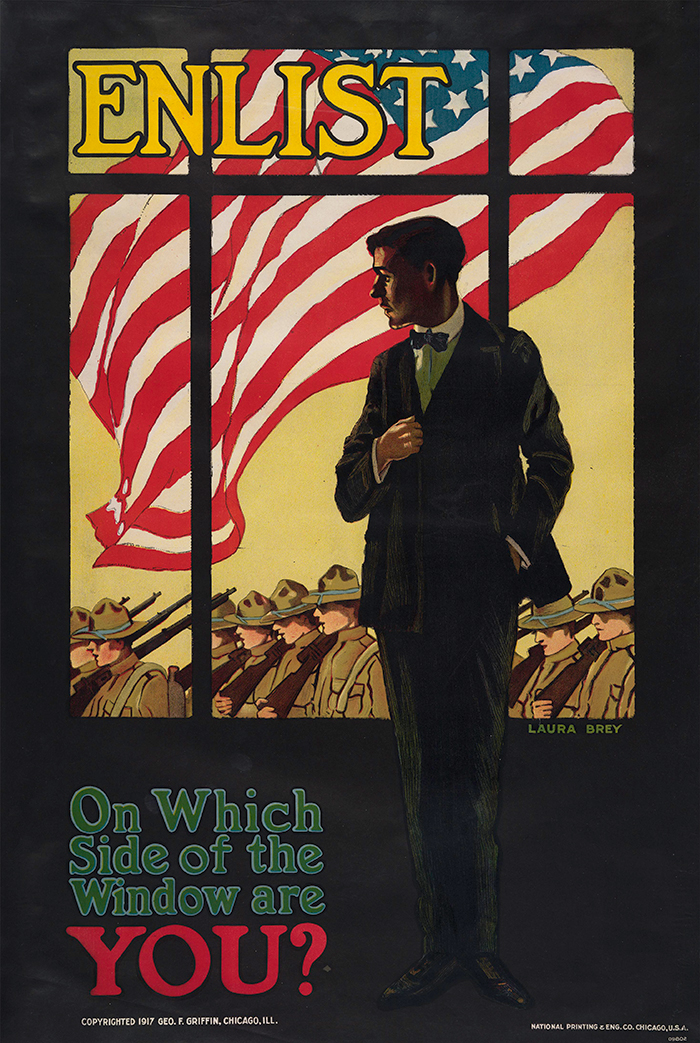 Enlist / On Which Side of the Window Are You?, United States, 1917, Laura Brey (dates unknown), color lithograph. The Huntington Library, Art Collections, and Botanical Gardens.

Artists famous for their depictions of animals created powerful symbols. For example, a ferocious cat, claws bared, leaps out from August Hutaf’s poster, Treat ‘Em Rough!, luring men to join the U.S. Tank Corps. (The exhibition’s gallery guide folds out into a reproduction of this poster that is perfect for decorating your wall.) A more subtle approach to recruiting is seen in Laura Brey’s Enlist: On Which Side of the Window are You?, in which a well-to-do young man gazes out a window as soldiers march by.

Brey is one of only a few women artists who designed war posters, but women contributed significantly to the effort in other ways. Mihaly notes, “Women working in munitions factories started decades before World War II icon “Rosie the Riveter.” Adolf Treidler’s For Every Fighter a Woman Worker suggests equality and poses a woman worker in such a way that a triangle turns into a “V” for victory. American industrial might is also the theme of William Dodge Stevens’ Teamwork Builds Ships, which focuses not on the vessel, but on the strength and heroic stature of the men building it. (For more on this poster, see the article Riveting Images in the Spring/Summer 2014 issue of Huntington Frontiers.) 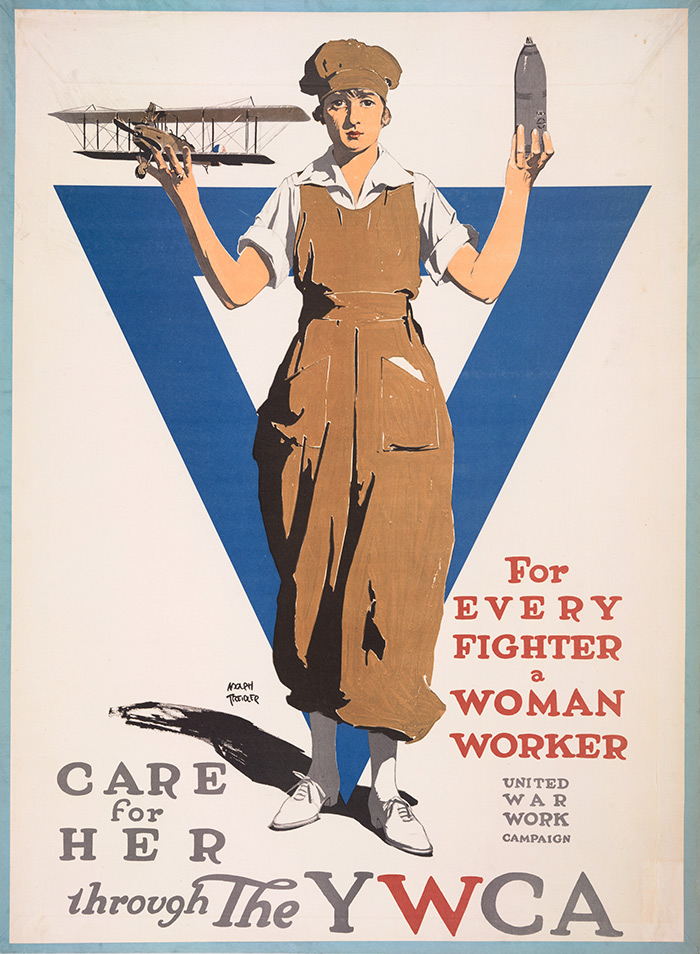 Winsor McCay, famous for pioneering the full-page comic strip Little Nemo in Slumberland, used his cartoon style to explain Liberty Bonds in If You Can’t Enlist—Invest. America is represented by a sword-wielding super hero, who foreshadows Captain America, using the Liberty Loan as a giant shield against menacing invaders. One of the most emotionally arresting posters is Joseph Pennell’s That Liberty Shall Not Perish from the Earth, in which New York City burns around a decapitated Statue of Liberty. The design helped raise $6 billion in the most successful American bond drive of the war.

Mihaly culled from more than 700 posters and ephemera of the period in The Huntington’s possession. He says he’s hard pressed to choose favorites. “You get attached to all of them. They all have fantastic stories.” He’ll be sharing some on a curator’s tour on Aug. 28. (UPDATE: The curator's tour is now sold out. You can check the ticketing site to see if any tickets open up.)The exhibition runs through Nov. 3, 2014. 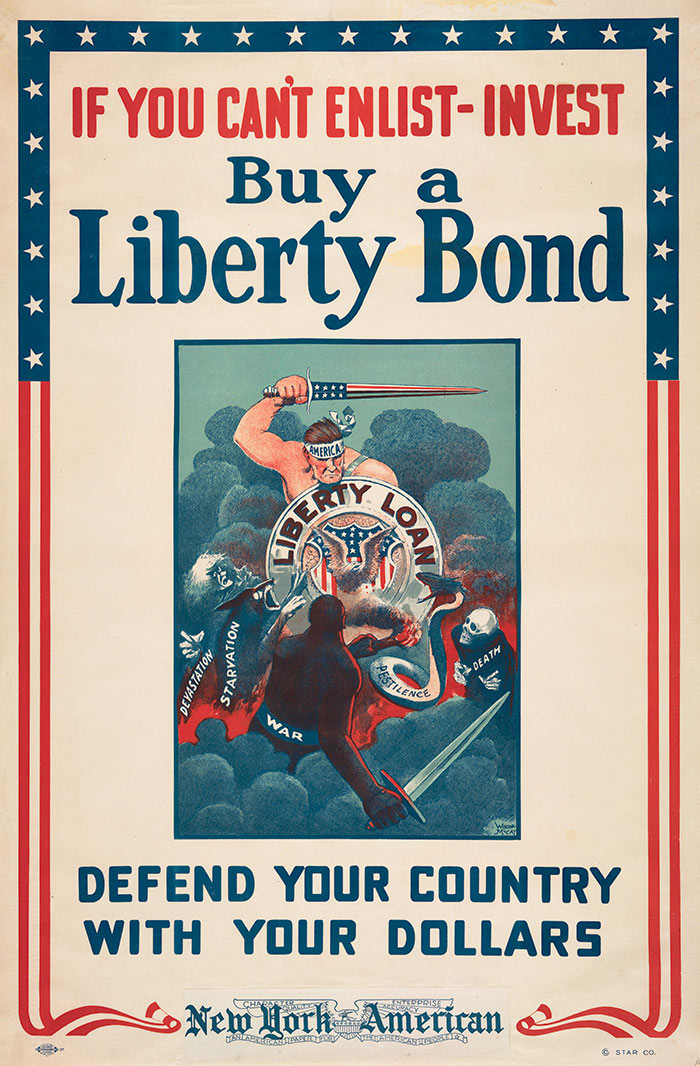 And Dave Mihaly, the curator of the exhibition, shares another tidbit: "Just recently, a friend sent me a circa 1917 photograph for our archives. The image shows a busy business office in the Concord, NH area. Treidler’s poster is mounted prominently on one of the office walls."

My husband's great uncle is the artist Adolph Treidler. As a side note, the woman featured in the poster "For Every Fighter A Women Worker" is actually Adolph Treidler's wife, Dean. We have a signed version of the same poster in our living room in Pasadena. Many of his works in WWI and WWII featured his wife.