Echinopsis: Queen for a Day 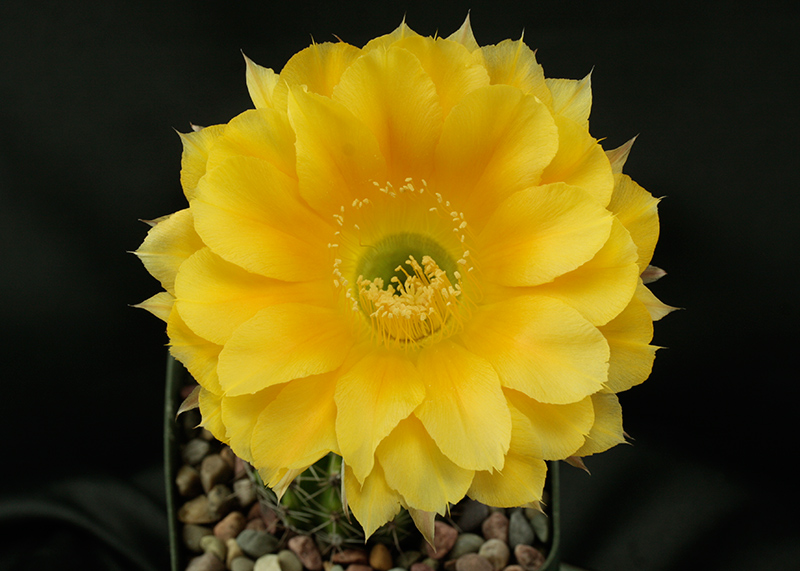 The Desert Garden at The Huntington holds many delights—literally thousands of them—and it's impossible to walk through the 10-acre landscape without feeling a little bit awe-struck. The sheer diversity of plant species—with their unusual colors, shapes, textures, and adaptations—draws visitors back again and again.

And exploring the garden in springtime can be especially delightful, particularly if you happen to catch an Echinopsis cactus in bloom. Their large, colorful flowers last only one day, but they are well worth every dazzling moment. 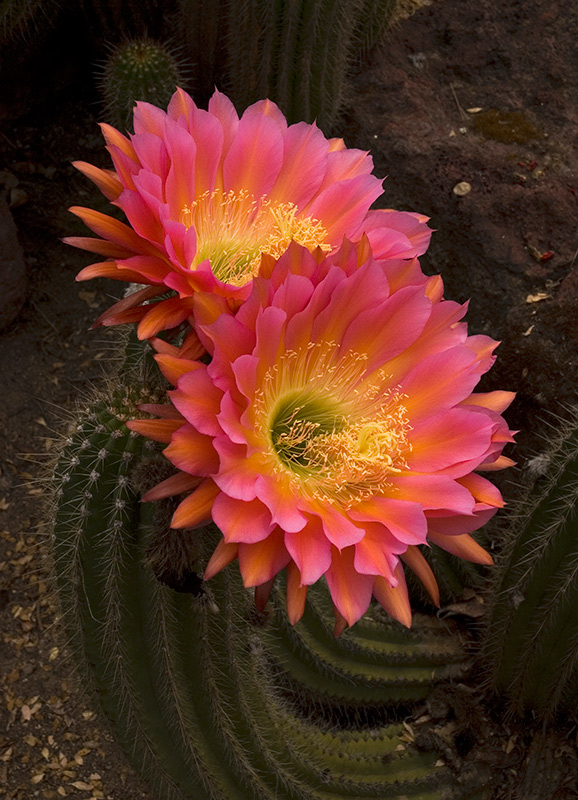 With flowers nearly eight inches in diameter, Echinopsis'Flying Saucer' stops traffic when it blooms in the Desert Garden. It's one of many varieties that will be available March 13 at the Second Thursday Garden Talk and Sale. Photo by Lisa Blackburn.

"The first and grandest flush of flowers each season is in April, but monthly flushes can be expected through July and often later months," says John Trager, curator of desert collections at The Huntington. "One of the remarkable features of the hybrids is the tendency of most of them to flower in synchrony, resulting in spectacular mass displays."

Trager will give a free public talk about these show-stoppers of the succulent world on Thursday, March 13, at 2:30 p.m. The presentation will be held in the Ahmanson Room in the Frances Lasker Brody Botanical Center. A plant sale will follow in the nursery—and we can almost guarantee that you'll want to take one of these beauties home.

The genus Echinopsis is native to South America, Trager explains—primarily Bolivia and Argentina but also parts of Peru, Brazil, Uruguay and Paraguay—and The Huntington's botanical collections include many of the 130 or so naturally occurring species. But the most spectacular blooms are often produced by the hybrids, which are also well represented here. Hybridizer Robert Schick, one of the leaders in the field, introduced 128 named hybrids through The Huntington's International Succulent Introductions program (ISI) from 1986 through 2004. The Schick hybrids are all still available online through the ISI.

"Schick expanded on the pioneering hybridizing work of Harry Johnson, whose full-color catalogs of cacti and other succulents went a long way toward stimulating interest in these plants from the 1930s to the 1970s," says Trager. The work of other hybridizers, including Hans Britsch of Western Cactus Growers and Mark Dimmitt of the Arizona-Sonora Desert Museum, is also represented in the collection. 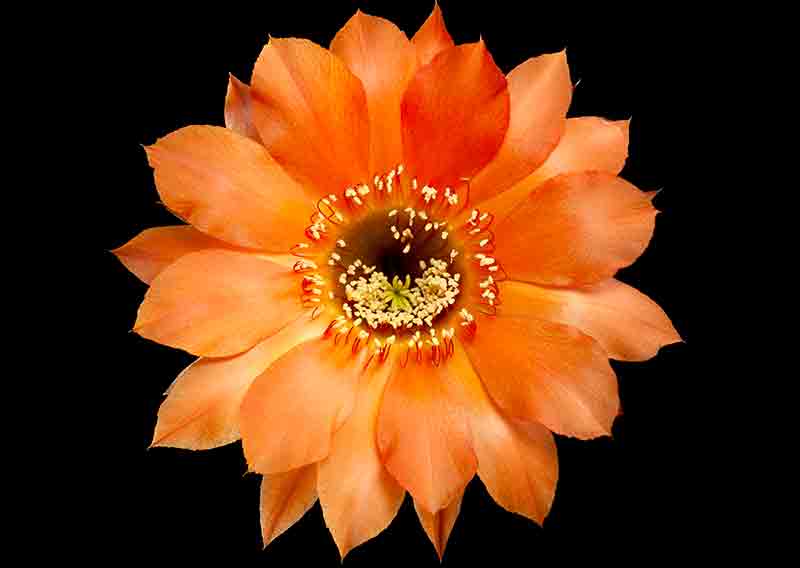 Trager says he tries to avoid playing favorites, but he admits to having a soft spot for several outstanding cultivars. "'Flying Saucer' is one of the best Echinopsis hybrids yet produced. It's by Hans Britsch. Among the catalog of Schick hybrids, a few that stand out in my mind are 'Antares' for its symmetrical stamens and starburst stigma, 'Frolic' for its deep yellow tones, 'Romance'—it's so hot!— 'Shere Khan' for its colorful stamen filaments, and 'Windigo' for its intense coloration."

As you might guess from his choices, Trager also appreciates the creativity behind the names Schick gives his hybrids. "Bob's names are well thought out and often relate to both the plant's characteristics and to interesting aspects of culture, mythology, and science." 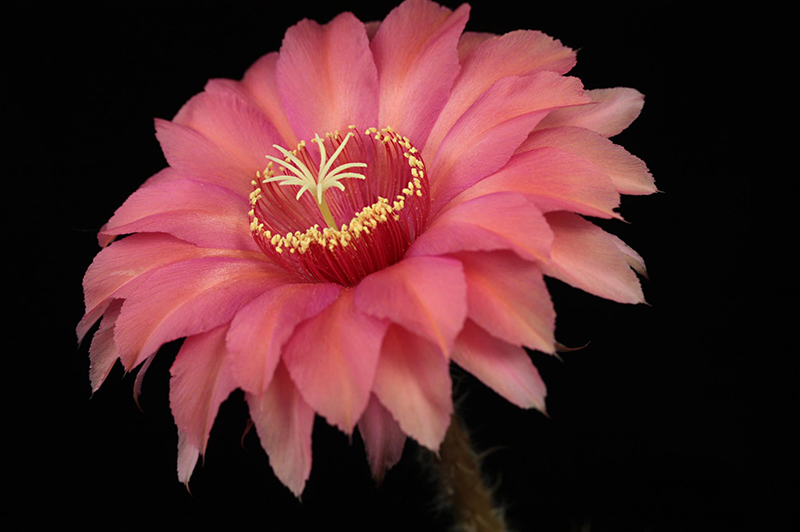 All the varieties pictured here will be available at Thursday's sale, along with many others.

The good news for those who are new converts to the Echinopsis fan club is that these plants are not the least bit finicky. "They're among the easiest cacti to grow," Trager points out. "They do well in pots, but they should be repotted regularly to promote vigorous growth and to prevent their becoming pot-bound." He recommends a fast-draining soil mix that's 80 percent pumice and 20 percent compost, and says that regular fertilizing and some afternoon shade will help keep them healthy and happy.

And Trager predicts you'll be pretty happy, yourself, when your Echinopsis cactus rewards you with one of its amazing blooms. 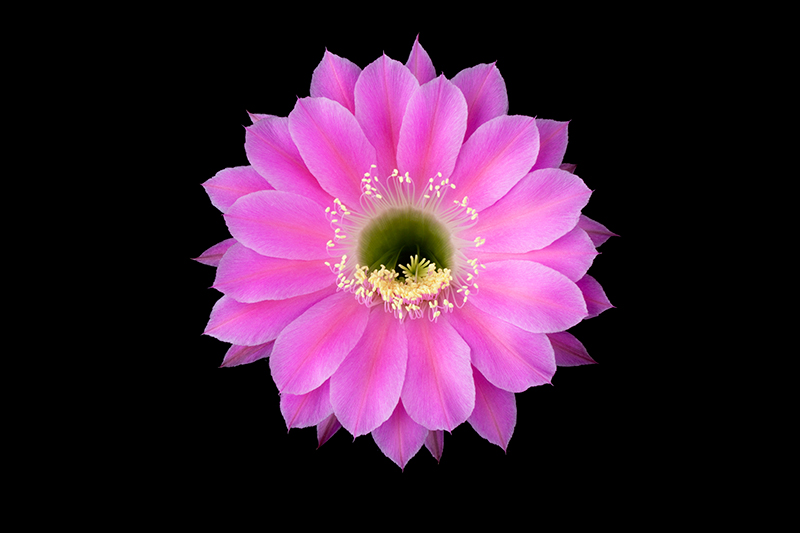 "Enrapturing" is the perfect word for them!

Glad you enjoyed it! Echinopsis cacti are truly spectacular, aren't they? Look for them in the garden starting in April.

Wonderful article. Short and sweet with beautiful pictures! Thanks.