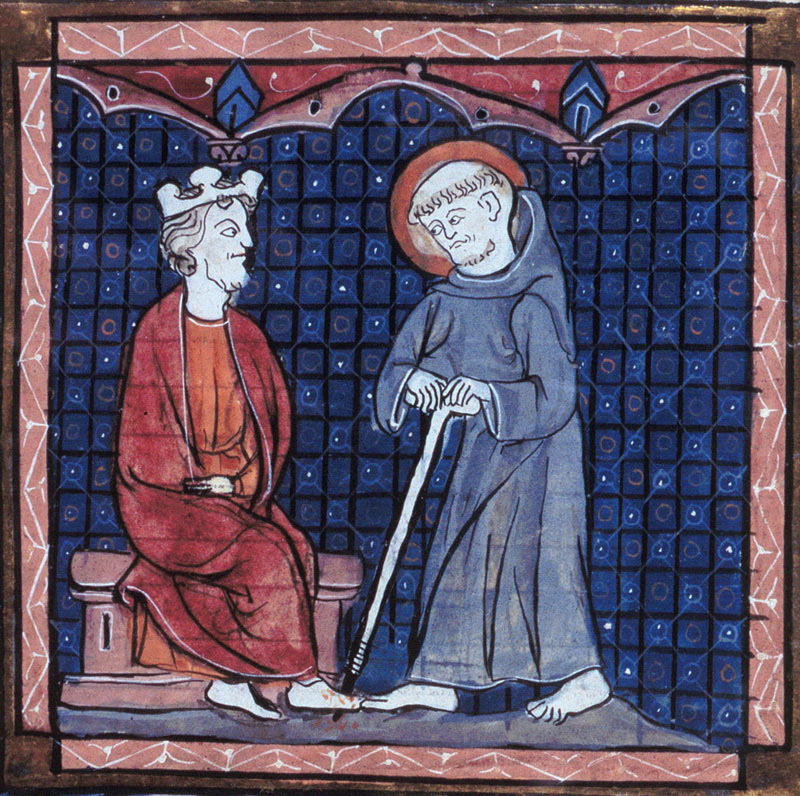 Will you be wearing green this weekend for Saint Patrick’s Day? If so, you’ll have plenty of good company. But there will be one notable holdout: Saint Patrick himself. In the earliest known likeness of Ireland’s patron saint, he is clad not in green but blue.

The tiny portrait comes from one of The Huntington’s rare treasures: a 13th-century French manuscript of the Legenda Aurea, or Golden Legend, a compilation of saints’ lives by Jacobus de Voragine. In it, Patrick is shown meeting the High King of Ireland wearing a blue cassock. And yes, if it looks like Patrick is stabbing the king in the foot with his staff, that’s exactly what happened at their first meeting, says Mary Robertson, the William A. Moffett Curator of English Historical Manuscripts at The Huntington. “According to tradition, St. Patrick later asked the king why he didn’t cry out when his foot was accidentally pierced,” says Robertson. “The king replied that he thought being silent was a sign of Christian forbearance.”

So Patrick was presumably red-faced with embarrassment in addition to wearing blue—which would have been very convenient for a medieval illuminator.

“The red and blue pigments that predominate in this illustration are frequently seen in medieval manuscripts,” explains Robertson. Red often came from botanical extracts, such as the root of the madder plant. For blue pigments, the most common source was azurite, a stone rich in copper, which was probably used in this work. Green, derived from malachite or verdigris, is often used as well; but the artist who omitted it when painting this portrait of Saint Patrick couldn’t have known that in selecting his color palette he was overlooking what greeting card companies would consider the obvious choice.

Due to the manuscript’s age and delicate state, Paddy makes only the rarest of public appearances these days, usually for research purposes. He won’t be on public display any time soon. But the 700-year-old manuscript is in beautiful condition. The best preservative is good caretaking, says Robertson. Limiting exposure to light and handling and controlling temperature and humidity helps (among other things) to keep those vivid pigments from fading.

So if you really want to impress your friends this year when you raise a frosty mug of green beer in honor of Saint Paddy, skip the shamrock green attire and celebrate in medieval blue.