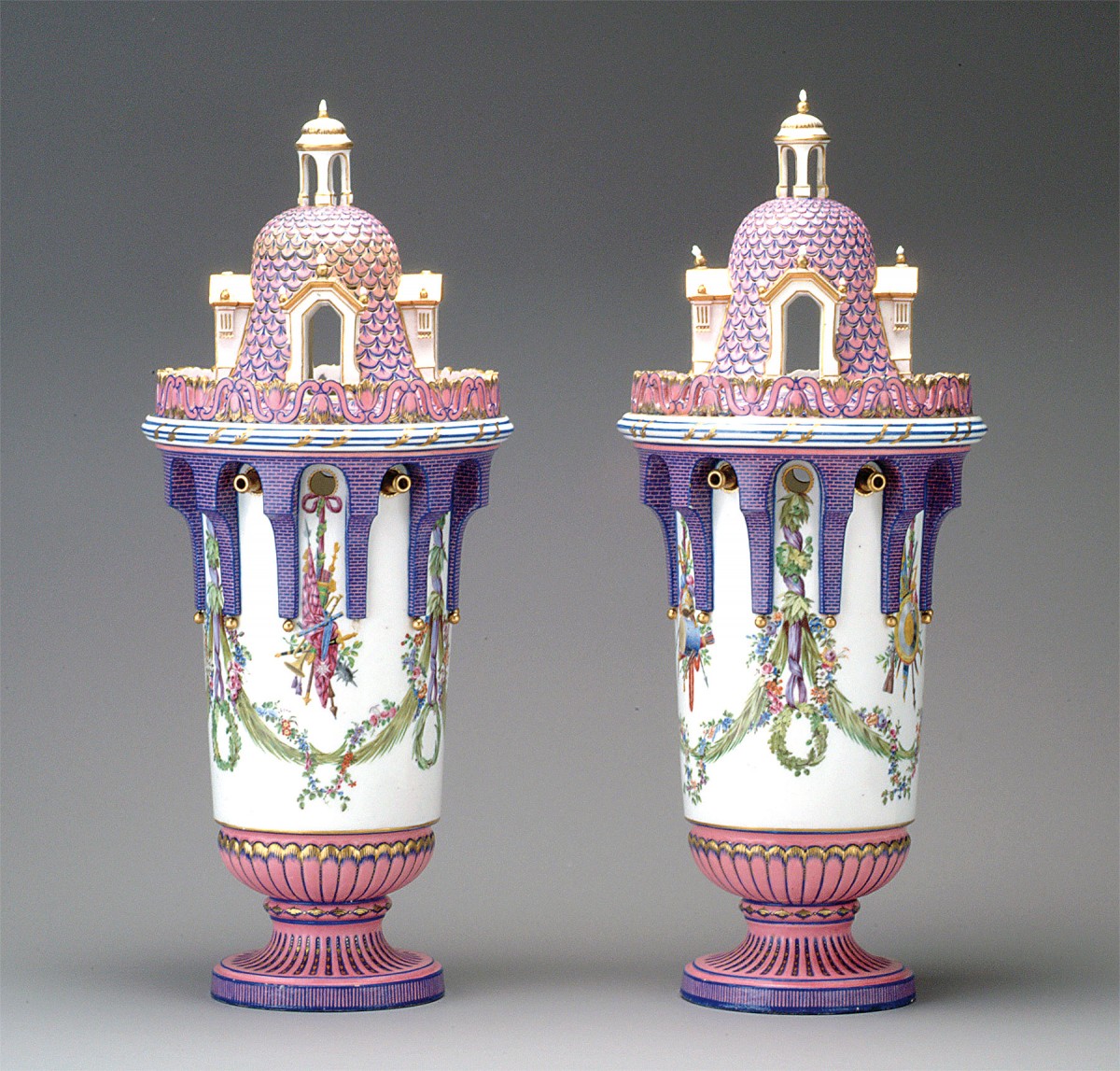 Made in the form of fortified towers, this pair of vases is extremely rare. Along with another large ornamental vase, they form a unique garniture that was sold from the Sèvres manufactory on April 7, 1763. Together they are among the largest and most extravagant soft-paste porcelain vases produced at Vincennes/Sèvres. This pair is described as two pots pourris entourrés that cost 600 livres each. The only other known vases of this shape are a pair of the same size at the Metropolitan Museum of Art, New York, which have a green ground and date from c. 1763. Unlike the Huntington examples, these are not noted in the sales records and may have remained unsold: a pair of vases entourées vert are listed in the factory inventory for 1773. The form is described for the first time as moules nouveaux de la tour in the inventory of shapes for 1762. It is not known who designed this extremely unusual model. Several vases of dramatic new shapes were introduced in 1762 and have been attributed to the influence of Etienne-Maurice Falconet (1716-1791; director of sculpture at Sèvres 1757-1766) who was then director of sculpture at Sèvres.

The model is distinguished not only by its great size, but also by the fact that the shape is in the form of distinct architectural elements with the lid designed to look like a high, shingled roof with four dormer windows and surmounted by a cupola. The body of the vase is cylindrical, simulating a round tower, with arched buttresses at the upper third that support an openwork balustrade around the top. The buttresses are arched over twelve small circular holes, alternately open or filled with gilt cannon muzzles, around the top of the vase. The base of the vase is gadrooned, tapering to a short fluted base. No other known vase produced at Sèvres before or after this model attempted to render such specific architectural ornamentation.

The high cost of these vases is a reflection of their size and the elaborate molded and painted decoration. The lids are masterpieces of the répareur's art. The four dormer windows and cupola are molded in full and are open to the inside. The entire surfaces of the bell-shaped lids are pierced through with small crescent shapes at the lower edge of each element representing a roof shingle. The lids, balustrade, base, and pedestal of each vase are decorated with an overglaze pink (rose) ground highlighted with blue and gilding. The outer lower edges of the lids, concealed when in place, are decorated with a rose marbré pattern. The arched buttresses are decorated with an unusual and elaborate pattern of blue against pink in the form of brickwork.6 The bodies of the vases are white and are painted in polychrome with elaborate garlands and military trophies. From every fourth hole at the top a wreath is represented as suspended from a pink ribbon, with one oak, laurel, and myrtle (?) wreath on each vase. Also hanging from these ribbons are long palm branches entwined with a floral garland that joins the three wreath sections. From every other fourth hole, a military trophy is represented, suspended from a pink bowed ribbon. There are three trophies on each vase.

The painting of the trophies and garlands is of exceptional quality. This, and the fact that so many specific elements such as the shield with Minerva, a French marshal's baton, and medal of the Saint-Esprit are included in the painting of the trophies, indicate that these vases may have been made with a particular noble patron in mind. However, they were produced just as the Seven Years' War was coming to an end. The war officially ended in February 1763 on terms unfavorable to France, and the vases were sold in April of that year. The design and production processes would have begun a year or two earlier. It is possible that, by the time they were finished, their overtly martial decorations and associations may no longer have been relevant or appreciated by the intended patron. Or perhaps they were simply considered an unsuccessful model due in part to their great size and expense. Except for the pair with the green ground that was made just after this pair, the model was apparently not made again by the manufactory.

The military trophies and other martial attributes along with the general color scheme and massive scale of this pair of vases entourrés compliment the vase à têtes de bouc, with its painted battle scene, to form a garniture of three monumental vases sold together from the manufactory for cash to an unknown buyer in 1763. At some point during the nineteenth century, the three vases began to be referred to as "Fontenoy vases". The garniture was sold to Henry Huntington in 1927 by the Duveen firm, which erroneously read the date letter on the right vase as an F for 1758, and assigned an unsubstantiated Sicilian provenance to the group.