SAN MARINO, Calif.—The Huntington Library, Art Collections, and Botanical Gardens announced today that it has acquired three early 20th-century British paintings associated with the legendary Bloomsbury Group and the influential Slade School of Art in London. The institution also has acquired an 18th-century Italian marble table-top sculpture. The marble, Two Hounds Attacking a Deer (ca. 1794) by Italian sculptor Francesco Antonio Franzoni, as well as one of the paintings, The Slopes of Navao, Picos de Europa (1935) by David Bomberg, were purchased by the Huntington’s Art Collectors’ Council at its 22nd annual gala held last month. The two other British paintings were acquired separately: a portrait of artist Dora Carrington (1912) by Mark Gertler, and a still life, Vase with Flowers and Lemon, (1913) by Duncan Grant.

The paintings complement The Huntington’s collections of Bloomsbury Group papers, which include letters from Grant and artist/designer Vanessa Bell, among others, and form critical links with the British art collection begun by Henry and Arabella Huntington a century ago.

“I’m particularly delighted with these acquisitions,” said Kevin Salatino, Hannah and Russel Kully Director of the Art Collections at The Huntington. “While we hold a strong core collection of early 20th-century British works on paper, these are our first modern British paintings. Given that we have the representative collection of British art west of the Mississippi, we consider it part of our mission to expand our holdings in this direction—one that I’ve thought and talked about since I arrived here. And the sumptuous Franzoni marble perfectly complements its new home—the center of the Thornton Portrait Gallery—among our masterpieces of late 18th-century British portraiture.” 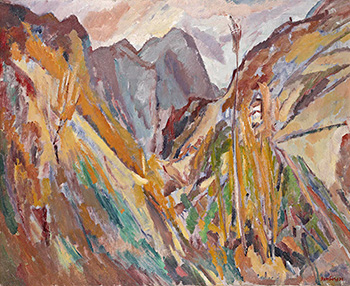 A dramatic view of a mountain pass worked with intense colors and broad, free brushstrokes, The Slopes of Navao is Bomberg’s response to the grandeur of the landscape of northern Spain, a subject that formed a major motif during the artist’s greatest period of creativity.

“Bomberg was arguably the greatest British painter of his time,” said Melinda McCurdy, associate curator of British Art at The Huntington. “And Slopes of Navao counts among the strongest of this important series that he painted in the Asturias mountains. There, he responded to the setting with works of powerful intensity—vibrant landscapes created with strong, impulsive brushwork that capture the region’s monumentality as well as changing light effects of sunlit valleys and shrouded mountaintops.”

Bomberg, like Gertler and Grant, was part of a remarkable generation of early 20th-century British artists. Considered artistically audacious by some, he was one of the leading figures in avant-garde circles in pre-World War I London and had loose associations with the Bloomsbury Group and the Vorticists. However, like a number of his contemporaries, his experiences of the war, during which he served on the Western Front, led him to question the aesthetics of the machine age—when mechanization was depicted in idealized terms. His later work, such as Slopes of Navao, evokes the tradition of British naturalism, combining an interest in capturing the experience of the natural world with the expressive style for which he became known.

The Slopes of Navao focuses on the dynamic nature of landscape in the tradition of John Constable (1776–1837), whose paintings convey the feeling of changing light and weather conditions upon the English countryside. Constable’s work is represented at The Huntington with the monumental View on the River Stour near Dedham (1822), which hangs in the same room where the Bomberg has been temporarily installed. Bomberg’s exuberant color and virtuosic use of the brush also recall J.M.W. Turner, whose work is represented at The Huntington by two notable paintings in a nearby room. 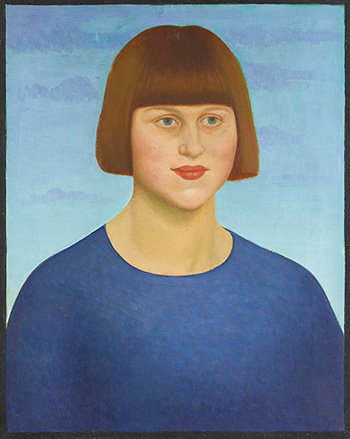 When Mark Gertler first spotted fellow Slade Art School student Dora Carrington in 1911, he was not particularly impressed. He commented, “I looked back, saw a long plait and turned-in toes; no good, I thought, and forgot all about it!” But his feelings for her transformed when she made a visit to his studio with a new, unconventional bob (and an antiestablishment approach to life to match), and he fell in love.

In his portrait of Carrington, Gertler sets off her distinctive features against a bright blue background. The entire bottom half of the portrait is the barely modulated blue of her jersey. The image is both a strikingly modern concept—flat and stark—and an homage to the clean, serene portraits of the Italian Renaissance. The Huntington’s portraits of a man and woman (ca. 1490) by Domenico Ghirlandaio (1449–1494) are examples of the practice. Gertler also had recently become interested in painting in tempera, an egg-based medium widely used in early Renaissance Italy but abandoned with the advent of oil paints. Though begun in tempera, the Carrington portrait was finished in oils, a more forgiving medium. The switch may have been made from necessity: Gertler often admonished Carrington for not sitting still, and tempera requires that the painter be quick and certain of his strokes, as it dries very quickly.

Portrait of Dora Carrington and the two other new paintings, along with several loans from private collections, will go on view in the Huntington Art Gallery in July, in an installation focused on British modernist paintings from the first half of the 20th century. 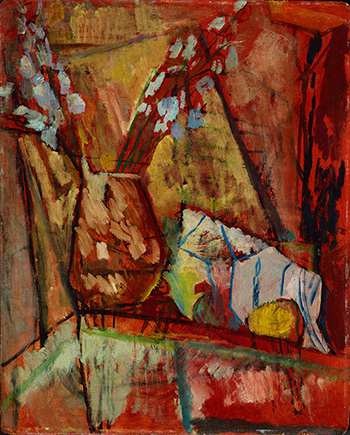 Duncan Grant, a key member of the Bloomsbury Group, is known for a style of bright colors and bold lines influenced by French post-Impressionism.

“Vase with Flowers and Lemon is an ideal representative of Grant’s signature painting style and his interest in cubism,” said McCurdy. “When he made it, he had just seen Roger Fry’s groundbreaking exhibitions of modern art that featured the latest works by Cezanne, as well as the nascent Cubism of Picasso and Braque.”

Grant painted two versions of this still life in 1913. Both are thought to have entered the collection of Lady Ottoline Morrell, the flamboyant socialite and benefactor of London’s most famous writers and artists. The Huntington’s version shows Grant’s initial exploration of the theme, seemingly painted over the outline of an earlier unrelated composition. The second version was reproduced in art critic Roger Fry’s 1924 book on Grant. The whereabouts of that version are unknown, making The Huntington’s the only available example of the boldly conceived composition.

Also in 1913, along with Fry and Vanessa Bell, Grant cofounded the Omega Workshops, an avant-garde design enterprise that sought to remove what they considered the false divisions between the fine and decorative arts. The Huntington has a growing collection of British decorative arts of the period, and the new Grant painting now joins these examples in The Huntington’s collection. 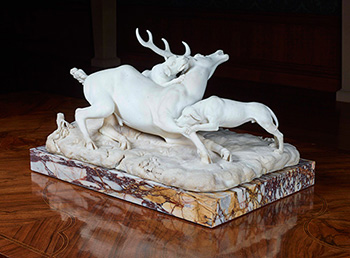 One of the most sought-after sculptors in late 18th-century Rome, Francesco Antonio Franzoni is best known for restoring antique sculptures in the Vatican museum, as well as for original decorative and sculptural works, including the clock for the façade of Saint Peter’s Basilica.

“Franzoni combined his work as a restorer with that of a fine artist,” said Catherine Hess, chief curator of European art at The Huntington. “He sometimes transformed and completed ancient classical fragments to the point of creating new works. His genius was in rendering a classical work so that it would appeal to the eye of the 18th-century collector. The final result is often extremely inventive, while conforming to the neoclassical style then prevailing in Rome.”

The powerful and expertly conceived Two Hounds Attacking a Deer portrays a deer pulled to the ground by two hounds—possibly referring to the mythological scene of Actaeon being attacked by his own hunting dogs—arranged on a monolithic base of rare colored stone. The work is a second version of one of the most prominent sculptures in the Museo Pio Clementino (the Vatican’s oldest public museum) that Franzoni made to satisfy an avid art market created by the many Grand Tourists visiting Rome.

“We have long wanted to display a work of art in the center of the Thornton Portrait Gallery to complement and animate the room. With this sculpture, the Art Collectors’ Council has given The Huntington a work of appropriate quality and scale that will resonate with 18th-century British aristocratic culture represented by the Grand Manner portraits displayed there. This remarkable, engaging, and rare marble is absolutely perfect.”