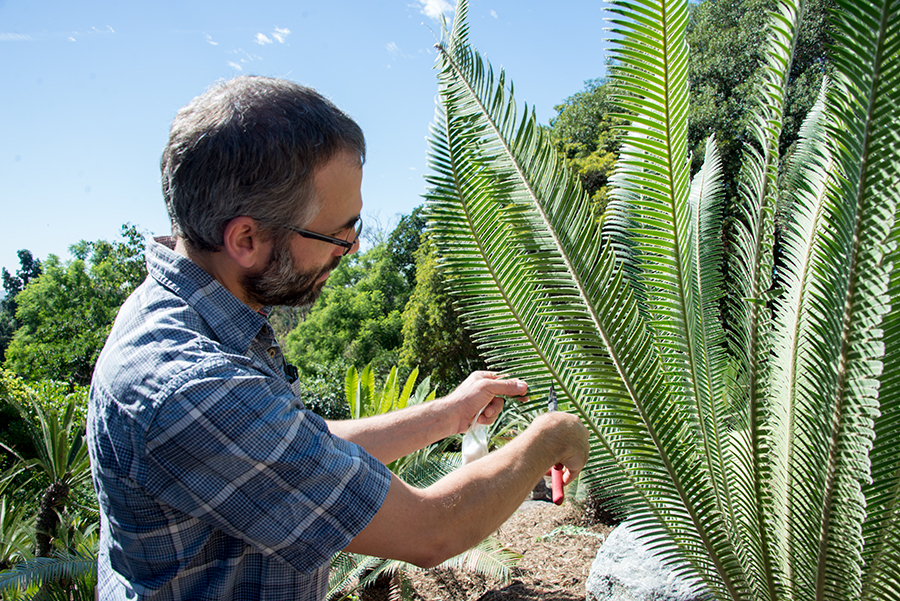 The cycad is often regarded as a living fossil—a favorite food of dinosaurs that hasn’t changed much in hundreds of millions of years. An international team of botanists debunked that idea in 2011, using genetic analysis to show that most living cycads are less than 12 million years old. Now, a new genetic study by a research botanist at The Huntington—conducted largely using material from the plant collections here—shows one cycad genus is far younger still. The study may also explain the distinctive distribution of species of the genus Dioon and help explain why the new species branched off when they did.

“We are trying to answer a fundamental question in evolutionary biology. How and why do new species form?” says Brian Dorsey, chief botanical researcher at The Huntington and lead author of the study, which was published in September 2018 in the American Journal of Botany and conducted with the help of scientists at the University of California, Berkeley and Cornell University. 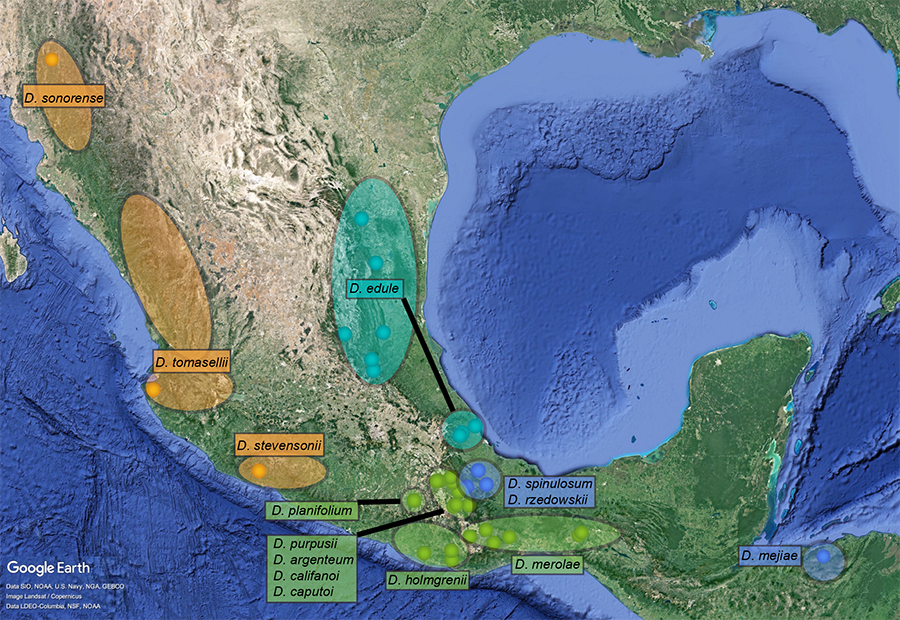 A map showing the geographic regions of Mexico where different Dioon species are found today. Image courtesy of Brian Dorsey.

Cycad researchers have long puzzled over Dioon, a hardy, slow-growing group of cycads. Various species are scattered around Mexico, and one is found in Honduras. Many of the plants live on steep cliffs and hillsides where tropical scrub forests transition into oak and pine forest. “You see these patterns and wonder what can account for them,” Dorsey says.

One of Dorsey’s co-authors is Timothy Gregory, a retired Genentech scientist and supporter of the University of California Botanical Garden at Berkeley who has studied and propagated cycads for three decades. He has spent much time documenting Dioon in the wild and, in a 2004 paper, proposed a dynamic habitat hypothesis to account for their distribution. He suggested that Dioon species that existed at the time of the last great Ice Age were forced to move downward into warmer valleys to survive and perhaps interbred. The hypothesis suggests that, as the climate warmed, the plants then radiated out of canyons and upward onto slopes of canyons and split into the species and geographic patterns we see today. 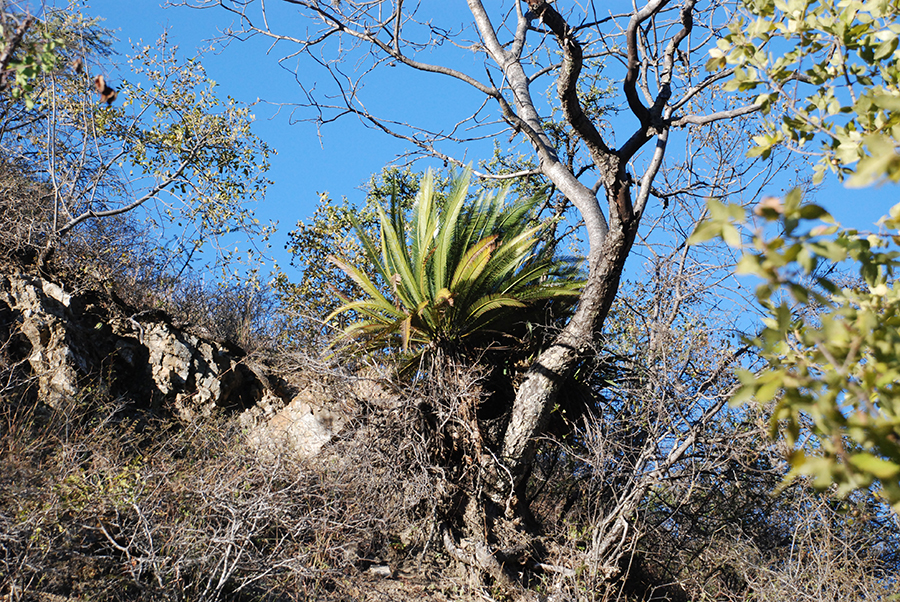 The cycad Dioon planifolium growing within a tropical deciduous forest in the Mixteca region of Oaxaca, one of Brian Dorsey’s research field sites. Photograph by Brian Dorsey.

The only problem with the idea, Dorsey thought, was that it meant that the new species would have had to split off during the Pleistocene epoch, which started just 2.6 million years ago. That didn’t seem long enough for this slow-growing and slowly reproducing plant to speciate. “That’s pretty recent, especially because cycad generation times are potentially hundreds of years,” Dorsey says.

Dorsey conducted his genetic study largely using cycad leaves from The Huntington’s collections and cycads that recently arrived here as a bequest from Loran Whitelock, the late Los Angeles cycad collector and expert. “Having the diversity of cycad species, particularly of Dioon, right outside my lab was essential for this research,” Dorsey says. “It allowed me to collect in one day what would have taken weeks otherwise and provided plenty of material to develop the genetic methods we used.”

This image shows the voluminous amounts of genetic data Brian Dorsey analyzed to determine when various cycad species may have evolved. Working with cycads is challenging because of the size of their genome, which is 25 times larger than the human genome. Image courtesy of Brian Dorsey.

By analyzing genetic material that differed among species, Dorsey’s team was able to infer the relationships between species. They then used a molecular clock—the average rate at which a species’ genome accumulates mutations—to estimate when those species split apart. The findings? Most living Dioon species are less than 500,000 years old and may still be in the process of speciating.

“I was really surprised. That’s so young for a species that has such long generation times,” Dorsey says. “Essentially, it’s only a few generations.”

Knowing that the plants split off during the Pleistocene fully supports the theory that the retreat of ice sheets played a major role in shaping the evolution of the plants. Last summer, Dorsey presented his work at the International Conference on Cycad Biology in South Africa. There, another international research group presented an alternative theory suggesting that Dioon cycads were much older. While the researchers still disagree, the two groups have decided to collaborate on future studies to pool their resources and refine their results. At the meeting, Dorsey was also appointed to the International Union for Conservation of Nature’s Cycad Specialist Group, which seeks to conserve the large number of cycad species that are threatened with extinction. 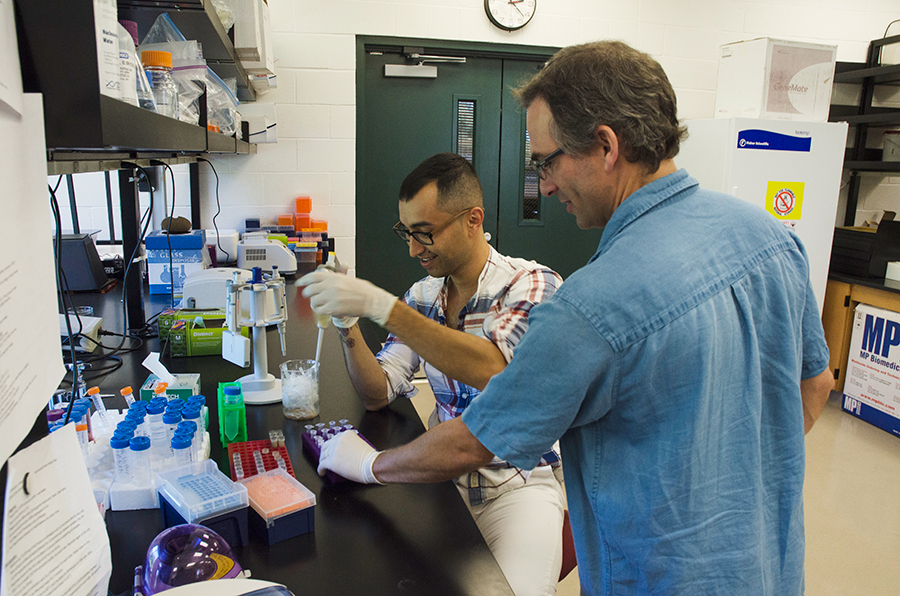 Dorsey’s next step is to better understand the biogeography of cycads and the relationships that exist between living species. For that work, he’ll spend time in the field, working with Mexican botanists to collect cycad material in Oaxaca and Chiapas that he will then analyze in his Huntington lab with the help of Pasadena Community College botany students he is training.

Dorsey, who received his doctoral degree at the University of Michigan studying Euphorbia, came to The Huntington in 2013 to start a research program in plant systematics and was immediately drawn to cycads. He’s excited to further the scientific understanding of this strange, charismatic, and little-studied plant. “With cycads, the more we learn, the more questions we have,” Dorsey says. “But we really are making a lot of progress in understanding the evolution of this group.”

You can read more about The Huntington's cycads in the Spring/Summer 2017 issue of Huntington Frontiers.