John Singer Sargent, Sphinx and Chimaera, 1916–21, oil on canvas, diam. 35 1/2 in. The painting as it appeared in raking light before treatment (left) and after treatment (right). The choice of the sphinx and chimaera reflects Sargent’s travels in Egypt and Greece in 1890. Purchased with funds from the Virginia Steele Scott Foundation and Mr. and Mrs. Harry Spiro.

For several weeks in early 2019, three early-career conservators worked under The Huntington's senior paintings conservator, Christina O'Connell. Each addressed a different painting conservation challenge from the art collection—their presence made possible by a grant from The Getty's Conserving Canvas initiative. We asked one of those conservators, José Luis Lazarte—a research scholar in paintings conservation at The Metropolitan Museum of Art in New York City—to provide us with an in-depth account of the work he did on a particular painting included in the exhibition "Nineteen Nineteen" (on view through Jan. 20, 2020, in the MaryLou and George Boone Gallery).

John Singer Sargent (1856–1925) painted his evocative oil sketch Sphinx and Chimaera before 1921 to serve as a compositional guide for a much larger mural intended for an ambitious project in the rotunda of the Museum of Fine Arts (MFA), Boston. Oil sketches such as this are essential for artists, who need to resolve complicated arrangements before spending the time and energy on the larger product. This vivid sketch came to The Huntington’s conservation lab with two pronounced horizontal undulations at the top and bottom of the canvas. The stress experienced by the tensioned canvas, along with environmental fluctuations, may have caused the deformations, which were most obvious when the painting was illuminated with a lamp at an oblique angle.

Sphinx and Chimaera joined The Huntington’s permanent collection in the late 1990s. When the oil study arrived in Pasadena, mounted on its original round stretcher, it had been virtually untouched since Sargent painted it. For a painting a little less than a century old, this was remarkable. Paintings on canvas are inherently delicate objects that can suffer from structural damage, such as tears. In the past, tears or deformations may have prompted overly invasive treatments, including the adhesion of a secondary fabric to the entire back of a painting. 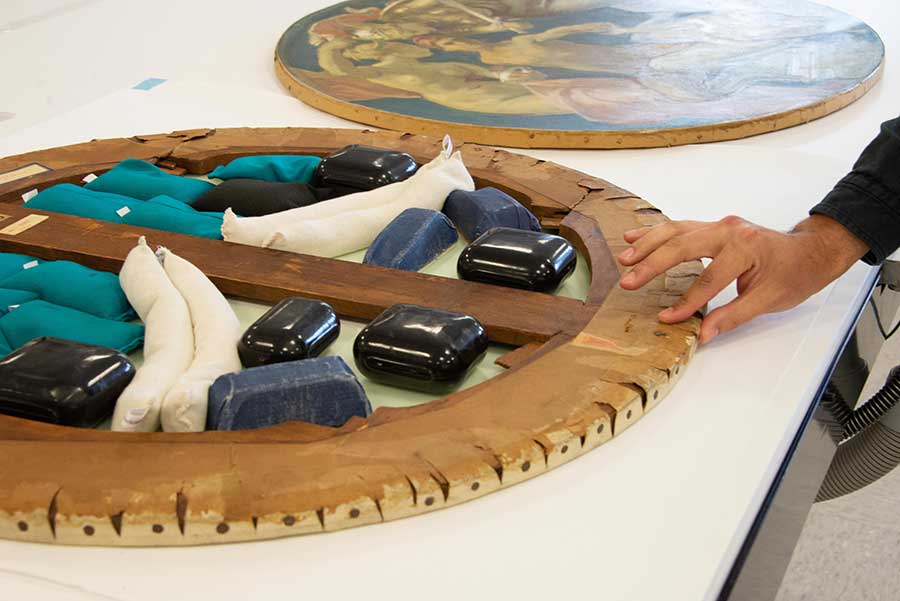 After carefully examining and testing Sargent’s Sphinx and Chimera with moisture, it was determined that the painting could withstand the proposed treatment. The painting is shown here facedown on a worktable. Note the notched canvas along the tacking edge, elucidating Sargent’s technique. Photo by Deborah Miller.

The pristine condition of Sphinx and Chimaera opened a window into Sargent’s practices. The painting was executed on a commercially prepared canvas that Sargent was able to acquire by the roll. Over the white priming, the artist loosely drafted the composition with a pencil before applying fluid oil paint with a limited yet vibrant palette of colors. To create the circumference of the roundel, Sargent used a compass, as indicated by a tiny puncture in the dead center of the painting. The round wooden stretcher was carefully constructed with four individual members and was likely manufactured by one of the many art suppliers located in London in the early 20th century.

Perhaps the most exciting finding lies along the tacking edge of the painting (the outer edges where tacks are attached). Here, the canvas was notched to avoid excessive bunching of the material along the border. This clever technique is reminiscent of garment construction in which round pieces of fabric must lie flat. Other paintings by Sargent give further clues as to how he may have created the sketches for the MFA murals. For example, Sargent’s alluring nude of Thomas E. McKeller shows an abandoned, round oil sketch in the background which was possibly intended for his Prometheus mural, also in the MFA Boston rotunda. This suggests that Sargent worked the round compositions on a large commercially primed canvas and that he selected only the most successful sketches to make individual round paintings. 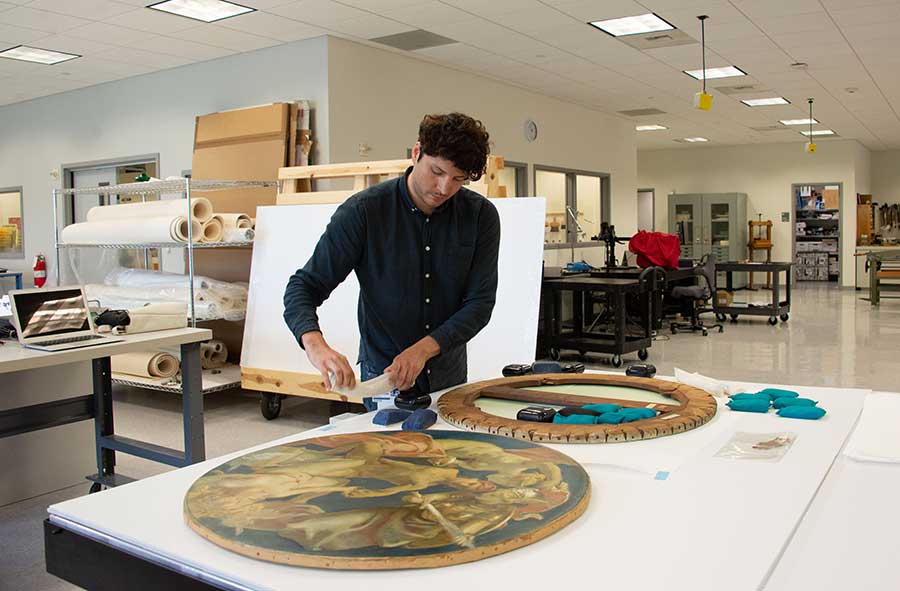 José Luis Lazarte, a research scholar in paintings conservation at The Metropolitan Museum of Art in New York City, weights the back of Sargent’s Sphinx and Chimaera. Photographs by Deborah Miller.

When I was entrusted with the treatment of this magnificent painting, I was over the moon, but it also meant that I needed to devise a conservative approach which would not introduce new materials that could compromise the originality of the work. After much deliberation, I decided to use small amounts of humidity and weights to diminish the undulations in a controlled manner. I humidified the back of the canvas slightly with moist blotters and weighted them strategically while the painting lay facedown on a soft yet rigid surface. After five days of absorbing the residual moisture with dry blotters, I was very pleased with the results. The surface is now on a level plane with no apparent distortions when illuminated and viewed from different angles.

While the deformations were resolved, the canvas felt a little slack. Therefore, I constructed a padded backing to support the canvas. Conservators commonly apply backings (padded only when necessary) to the verso of paintings to avoid dust accumulation and damage inflicted from the back, as well as to mitigate vibrations experienced by the canvas in transit. The pads were made out of polyester batting cut to fit through the stretcher windows and were covered with nonwoven, soft fabric. These semicircular “pillows” were adhered to acid-free foamcore, cut to match the periphery of the painting. The padded backing will help maintain the canvas in a vertical orientation, preventing the reoccurrence of the deformations.

José Luis Lazarte is a research scholar in paintings conservation at The Metropolitan Museum of Art in New York City. From February to April 2019, he was a project conservator in the Preservation Department at The Huntington.