Beekeeper Kevin Heydman's relocation process is one for the books 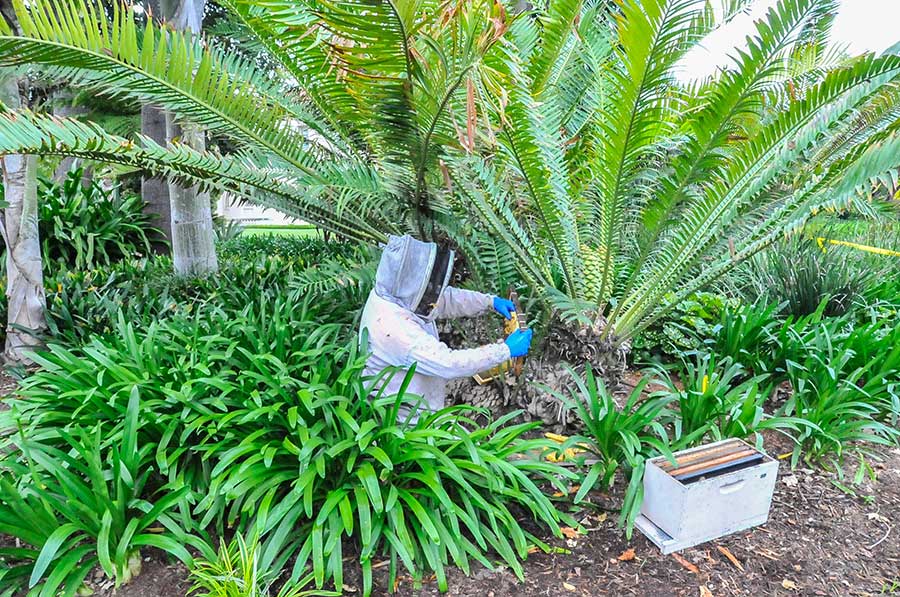 During early morning hours, while The Huntington is closed to visitors, beekeeper Kevin Heydman extracts a hive of bees from a cycad near the Huntington Art Gallery. Photograph by Andrew Mitchell.

Bees are no strangers to The Huntington. There are numerous hives in trees on the property that cause few problems and allow bees to do their valuable work pollinating plants. But when a hive gets too close to areas frequented by visitors, the bees need to be relocated.

Earlier this spring, gardeners noticed that bees were swarming near the circular drive in front of the Huntington Art Gallery, a busy thoroughfare for visitors. Further investigation revealed that the bees had settled into a particularly special cycad: a tall, beefy specimen of Encephalartos whitelockii, a cycad that was given to The Huntington by the noted cycad expert and collector Loran Whitelock. The cycad is native to only one place: the area around Mpanga River Falls in Uganda. The species was named after Whitelock nearly 20 years ago in recognition of his contributions to cycad exploration and science. 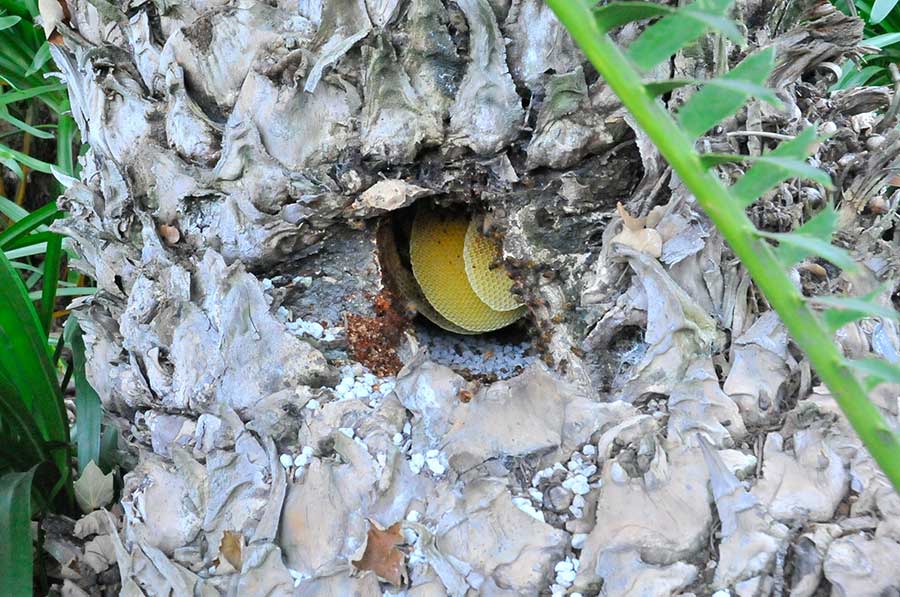 The hive’s honeycomb is visible through a hole in the cycad’s trunk. Photo by Andrew Mitchell.

“This plant held a special place in Loran’s garden before it came to The Huntington,” said Gary Roberson, lead project gardener for the palm and cycad collection. “Loran had chairs around it, and he loved to sit by it,” recalled Roberson, who was in charge when Whitelock’s massive cycad collection was moved to The Huntington in 2015 from Whitelock’s home in nearby Eagle Rock. Roberson had noticed then that this particular cycad had a rotted area in its trunk. But cycads are hardy. The plant had sealed itself off from the rotting area and grown new roots. Roberson cleaned and cauterized the rotted area and packed the hole full of pumice. Over time, that pumice was removed, probably by ground squirrels or other rodents. And the cavity that remained in the cycad trunk? It made an ideal home for bees. 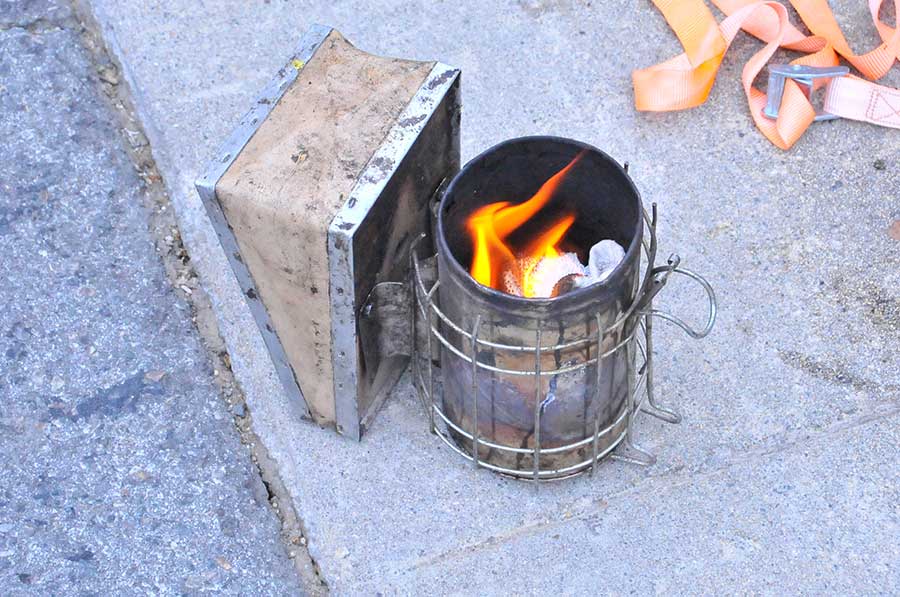 Heydman fires up a smoker that he uses to encourage bees to leave their established hive. Photo by Andrew Mitchell.

When bees cause problems at The Huntington, the employee who gets the call is Andrew Mitchell, the curator for material objects in the Botanical Division and a veteran beekeeper. “We don’t mind a swarm high up in a tree, but if it could potentially interact with people, we need to do something,” he said. Sometimes, in order to make a hole large enough to extract a hive, a tree must be cut open or cut down. Mitchell knew that was not a possibility for this beloved cycad. “This is a very, very special tree,” he said. So, he called in an expert.

Kevin Heydman works for an extermination business, but he has been a beekeeper for nearly 20 years. He teaches classes on beekeeping, sells raw honey, rents out bees for pollinating crops, and runs the Bee Booth at the Los Angeles County Fair each year. “Kevin’s got pest control on his truck, but he’s really a beekeeper,” Mitchell said. “He’s a secret agent.” 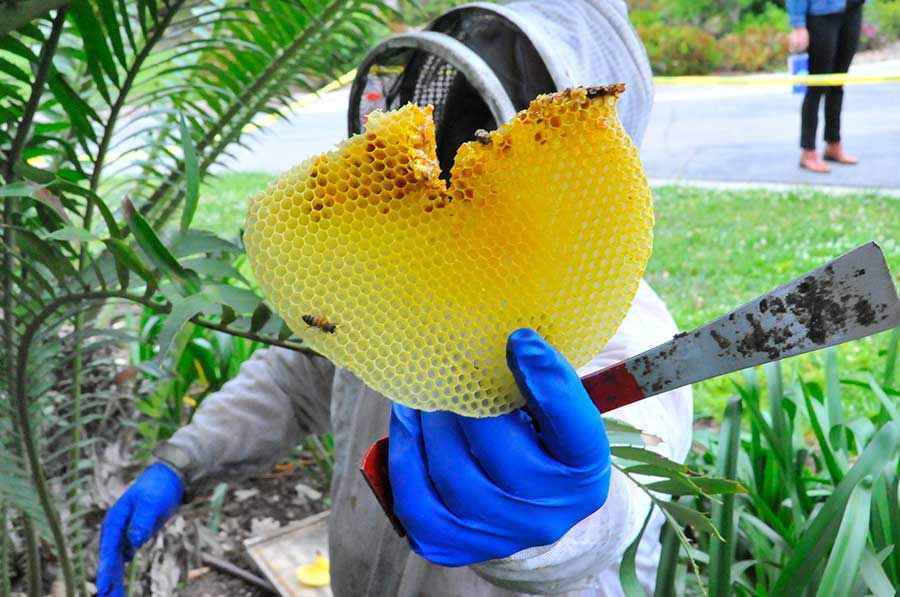 Heydman holds up a large piece of honeycomb. Photo by Andrew Mitchell.

Both Heydman and Mitchell are huge fans of both Apis mellifera (the European, or western, honeybee) and native bees, for good reason. Bees are responsible for pollinating nearly one-third of the world’s food crops and are the single most important species of pollinator in natural ecosystems. Botanical gardens rely on them as well. European honeybee populations have crashed in recent years, victimized by a variety of parasites and a mysterious “colony collapse disorder.” Recent studies, though, show bees may now be on the rebound, perhaps because of new limitations on pesticides that were harmful to the insects.

Heydman’s first step in the relocation was to remove the bees. He met Mitchell one morning at 6 a.m., while the gardens were closed to visitors, the weather was cool, and the bees would most likely be less active. Since it was too early for the bees to fly, Heydman would not know until he opened the hive how feisty the bees inside might be. “The bees can fight back,” he said. “They don’t just all jump into the bee box.” 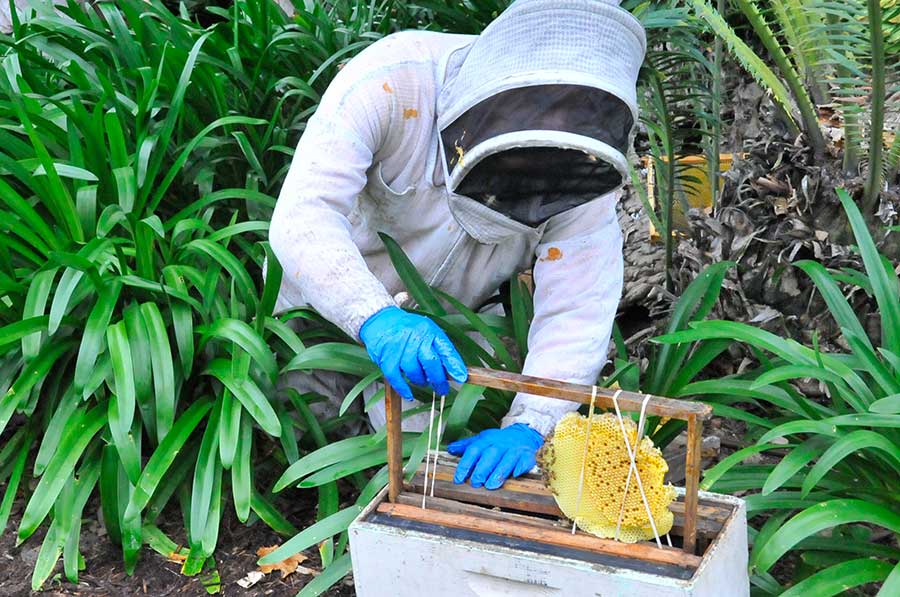 Heydman secures pieces of honeycomb in a frame and then slides them into a bee box. Photo by Andrew Mitchell.

He started by firing up his smoker with old rags, leaves, and pieces of honeycomb; he believes the scent of burning honeycomb makes bees more likely to leave because they think their hive is on fire. Peering into the hole in the trunk, the two men caught glimpses of layers of white honeycomb inside. “It’s beautiful,” Mitchell said. “They’ve been in there a while,” Heydman added.

Heydman, clad in a bee suit, sat by the cycad and carefully removed large pieces of comb. “They’re waking up,” he observed, as the confused bees started to leave their hive. Heydman carefully strapped the comb onto wooden frames that he then inserted, one by one, into a bee box. Wearing thick, blue rubber gloves, Heydman then gently scooped the bees out of the hole and placed them on top of the box. He needed to remove the queen and enough other bees to keep the brood colony warm. “If we can get another 100 bees, it’ll be better for the colony,” Heydman said, gently scooping out handful after handful. 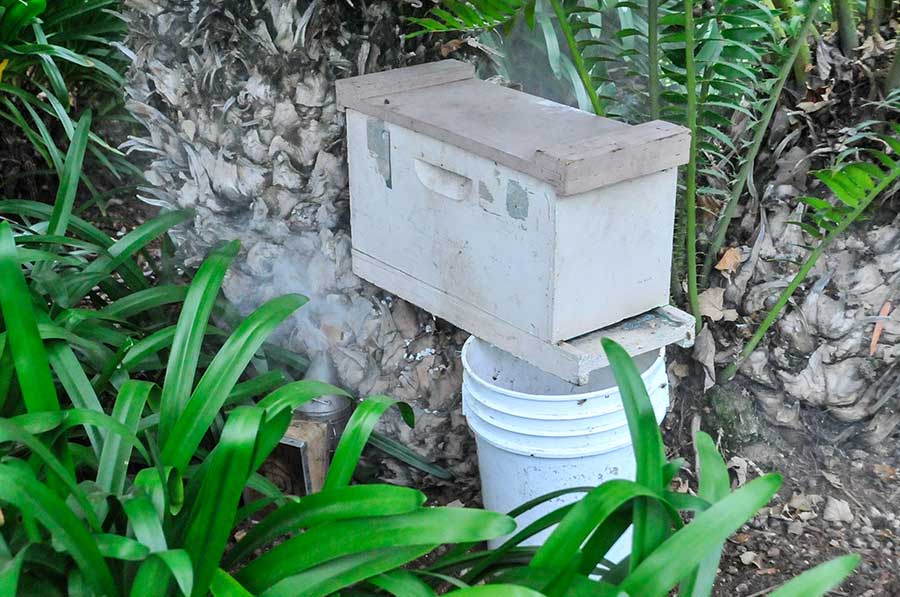 After extracting handfuls of bees and the honeycomb, Heydman uses his smoker to drive any remaining bees into the bee box . Photo by Andrew Mitchell.

There was not a dead bee in sight. “The bee loss from Kevin’s process is absolutely minimal,” Mitchell said. The bees, European and not Africanized, stayed calm throughout the transfer. “These are good bees,” said Mitchell, who noted that even European honeybees can attack when relocated or provoked.

The two men then placed the bee box near the opening in the cycad while Heydman left the smoker under the hole, hoping to flush out any holdouts. The box would later be taken off Huntington grounds, far enough away so that the bees would not return “home” to the cycad. After a few months of adjusting to their box hive, the bees will be permanently relocated to a new home, according to Mitchell. 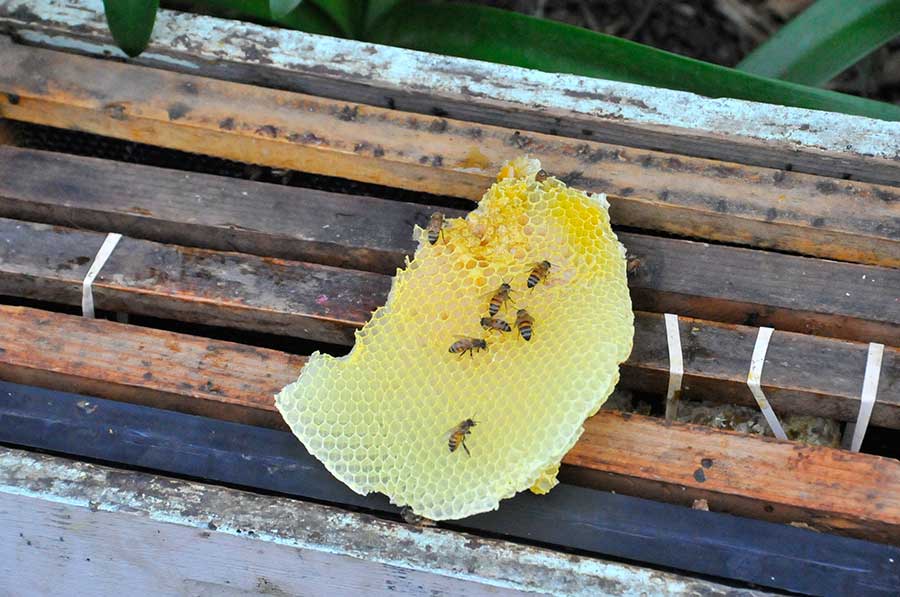 Bees and a piece of honeycomb on a bee box. Photo by Andrew Mitchell.

Bees in the gardens tend to keep Mitchell busy. Bees move when they run out of space, he said. In a crowded hive, bees will make a new queen, and the old queen will then take off with part of the colony. The bees will rove around—settling temporarily onto trees, into roofs, even underground, Mitchell said, until they can find a good location for a new hive. “Swarms are basically nomad bees,” said Mitchell. “They travel.”

Often hives will exist for years without causing problems. That was the case in the Japanese Garden, where a massive beehive thrived within the roof of the historic Japanese House for years, Mitchell said. But the bees had to be relocated last summer after temperatures spiked to more than 115 degrees, causing the honeycombs to melt and honey to drip down the iconic structure. It was a very mature hive. “The combs were more than two feet long,” Mitchell said. 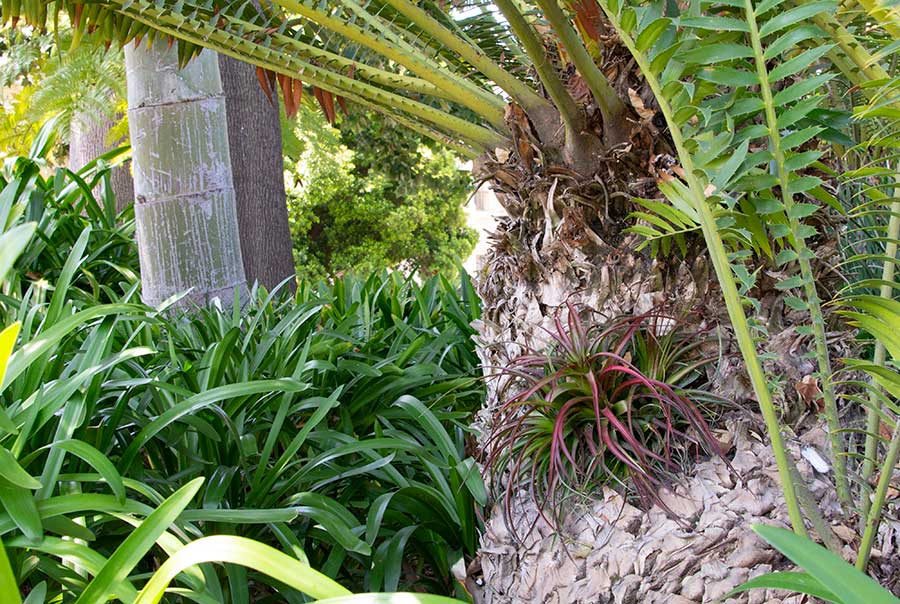 An air plant fills the hole in the cycad’s trunk to keep out bees and other creatures. Photo by Deborah Miller.

The bees were relocated; excess honey was given to garden staff; and it took months for ants, robber bees, and other insects to clean remaining honey from the roof. Once the honey was gone, Mitchell was able to restore the roof and its sculptural elements. Today, there is no sign of any damage.

The same is true of Loran Whitelock’s favorite cycad. After the bees were removed, Roberson stuffed the hole with clean pumice and attached some stainless-steel mesh so that squirrels could not get inside. He then camouflaged the hole with a beautiful reddish Tillandsia, or air plant, which looks right at home on the cycad trunk. Said Mitchell: “That was a textbook relocation.”