The distance between Mexico and the U.S. can't always be measured in miles

Left: José Chávez Esparza (1933–1981), in 1956, as a young man migrating to the United States as a bracero, an agricultural worker in California under contract with a U.S. employer. Photograph in Miroslava Chávez-García’s personal collection. Center: The first letter of courtship José Chávez Esparza sent María Concepción Alvarado, known as “Conchita,” in late December 1963. Digital copy of letter in Miroslava Chávez-García’s personal collection. Right: Recently graduated from la secundaria (secondary school) in 1963, María Concepción Alvarado (1945–1981) expected to continue with her studies and embark on a career in education or health. The family’s growing economic troubles ended those plans, however, forcing her to stay home to help maintain the household. Photograph in Miroslava Chávez-García’s personal collection.

For generations, Mexican migrants hoping to expand their possibilities have had to bridge the emotional gap between home and the unknown, between here and there (aqui y allá). To do so often required fashioning strong tethers to home.

Miroslava Chávez-García, professor of history and Chicana/o Studies at the University of California, Santa Barbara, sunk herself deep into the very fiber of bonds that linked families over the distance of miles and time. Her family’s cache of letters—318 in all—provide frank, often emotional testimony about the struggles of making a new life in the United States. In her new book, Migrant Longing: Letter Writing across the U.S.–Mexico Borderlands (University of North Carolina Press, 2018), Chávez-García explores the day-to-day texture of life on either side of the border in the mid-20th century as detailed in personal correspondence. In these private notes—now part of The Huntington’s manuscript holdings—the cost of expanding one’s possibilities and the many shades of desire are rendered palpable.

The beating heart of this ambitious study is the complex courtship of Chávez-García’s parents, a wooing that evolves over three years in 80 handwritten letters (45 missives from her father, José; 35 from her mother, Conchita) that drift back and forth over a border that is distinct yet porous.

For Chávez-García, this down-the-rabbit hole exploration into her family’s archive did not begin as an act of recollection, but as a way to reanimate what had been lost. In 1981, her parents and maternal grandmother died in an automobile accident. She and her brother (12 and 13 at the time, respectively) survived with few serious injuries, and later they moved in with her father’s youngest brother, her tío Paco, who raised them with his wife, Beatriz.

Over time, the family began to discard keepsakes—furniture and knickknacks—but they held onto correspondence, carefully stowing it away in boxes and trunks, stored in basements.

Chávez-Garciá was not aware of her parents’ letters until she found them as a young adult. She remembers, though, that, “when I was a little kid, my mother had a drawer with lots of papers, letters, and manila folders,” and now wonders if they were kept there. When she stumbled upon them, she “really wasn’t ready to take them on. The second time, I was different.”

In 2013, she was a new faculty member at UCSB and was ready to plunge into a new project. “I had just finished a book project, and some years before, I had begun recording oral histories with family members.” Speaking with tío Paco, she had learned that he had not just recovered her parents’ correspondence, but kept his own archive as well. “He used to say it was my aunt who was the packrat but, really, he was the one holding onto things.” Whether it was for sentimental reasons or to preserve history, her uncle’s impulse made her deeply grateful. When she went to visit him, “there they were, neatly bound in rubber bands. I was amazed to have so many.”

Transcribing these voices from the deep past, she began to learn a multilayered story about the costs of risks and sacrifice. These weren’t simply the letters of courtship; they situated her family’s life in a larger context, one in which she began to understand the price that their dreams of a secure footing in the world had exacted. What else, she wondered, did they reveal? 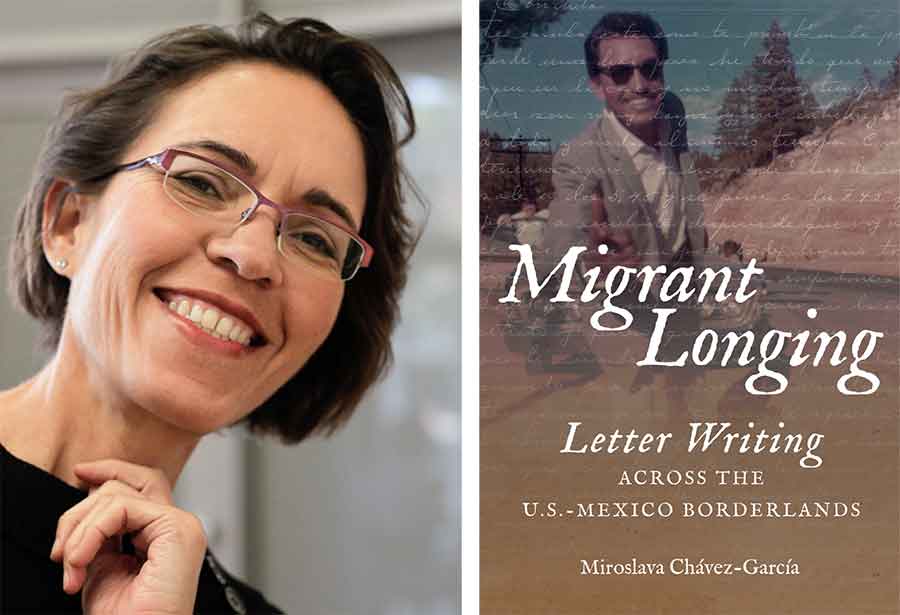 One of her goals, writes Chávez-Garciá, was to “interpret and craft their multiple identities as they emerged” within the correspondence—how each family member cast themselves within their personal narrative. Gender roles as well as class dictated both the trajectory and shape of their lives.

José was a contract laborer working in the U.S. as part of the bracero program, the bi-national labor agreement between the U.S. and Mexico that lasted from 1942 to 1967. He was 30 when he began wooing Conchita, who was just 18 at the time and on the eve of graduating from secondary school. She dreamed of becoming a nurse or a teacher.

The letters commence days after José returned to the Imperial Valley, a swath of California farmland just north of the border, following a short visit home to Calvillo, a city in the Mexican state of Aguascalientes, where he had only glimpsed Conchita. He set pen to page, replaying the evening. Instantly captivated, he admitted that he was ready to give her his heart: “I am not asking you to accept my proposal immediately,” he declared in his first letter, dated December 1963, “but rather when you are able to feel love for me.”

Conchita was both incredulous and brusque in her response: “[L]ook I don’t feel I love you in a way that would take us beyond a friendship . . .” Her longing rested elsewhere and she told him so—often bluntly. As time passed, their circumstances shifted on either side of the border: His become more stable, hers more uncertain—and the two, sharing their struggles by mail, grew closer.

It is not simply the details that pass between them—from the difficulty of their day-to-day lives to the joy of music or the escapism of movies—but the crisp volley of family correspondence that Chávez-García found compelling: “That ‘one-for-one letter’, referring back to the previous one”—like an unbroken chain, the long conversation circling back over all those miles.

Those rich depictions of the migration process are what make the collection so important, says Clay Stalls, curator of California and Hispanic collections at The Huntington. “It’s the first-person testimony, which I think is invaluable. The letters outline the reasons and motivations for coming to the States. The strategies for coming here, their lives at work once they are in the States and . . . their cultural and social lives as well. It personalizes the migrant experience.”

Now, with some distance from her research, Chávez-García reflects that while these letters might have assuaged some her own longing, “they do not make up for intimacy.”

That hole in her heart has been filled instead with a revelation, one that coincided with her contextualizing her family’s experience: “While in some ways I see them as very special, I really wanted to make my family part of a universal experience—one that humanizes migrants.”

The immigrant story isn’t only about what strained their backs, but what weighed heavy on their hearts. These are “people with joys and sadness, trying to find happiness on both sides of the border.”

Lynell George is a freelance journalist based in Los Angeles.