Reverence for the Bard permeates The Huntington

Marking the 400th anniversary of Shakespeare's death, Stephen Tabor, The Huntington's curator of early printed books, relates how the institution's founder built one of the world's great collections of the playwright's works. 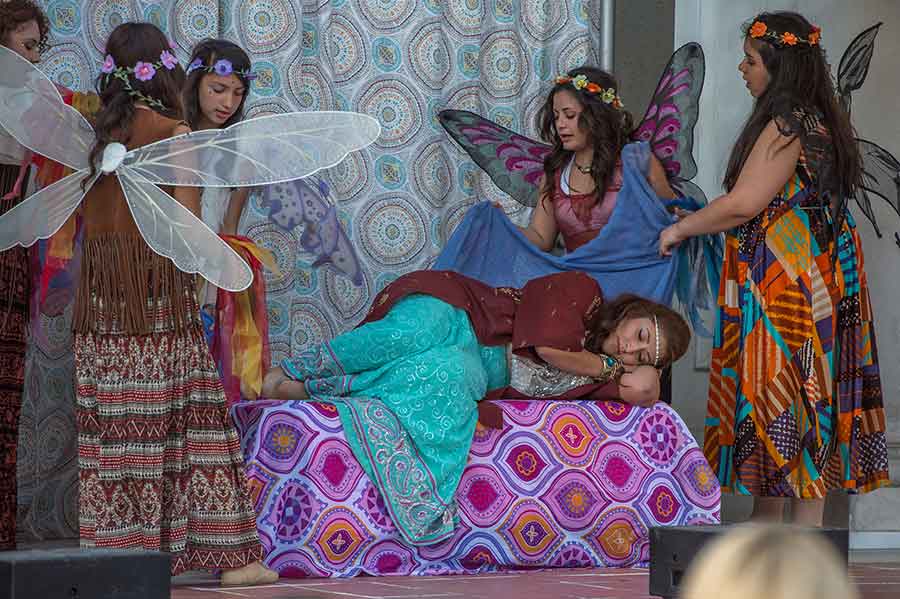 When Henry Huntington turned 60 in 1910, he announced his retirement, saying, "I believe I am entitled to some rest and playtime. Why shouldn't I take it?" For one of America's richest men, this meant a new commitment to book collecting, in which he had been dabbling with increasing sophistication during his working years. Recognizing that he had to limit his scope, he set a goal of building the best private library dedicated primarily to English and American literature and history—with a few incidental jewels like a Gutenberg Bible.

At the turn of the 20th century, reverence for William Shakespeare's works was perhaps the most powerful engine driving the passions of gentlemen collectors. This stimulated interest in all early English drama and in original editions of any works that had a flavor of Olde England. Coincidentally, the 1894 imposition of estate taxes in Great Britain was starting to force the dissolution of many old family libraries. Auction houses and antiquarian book firms were flush with rarities that had never before been exposed to an international market. Into the resulting feeding frenzy dropped Henry Huntington, ready to play, his sights set on Shakespeare.

His method was not to hang around bookshops; he preferred to bag whole collections at once, using high-end dealers like George D. Smith and A.S.W. Rosenbach as stalking horses. His fast-growing library therefore incorporated the knowledge and taste of numerous discerning buyers who had preceded him. His first notable en bloc purchase was the library of Elihu Dwight Church in 1911. In addition to a choice collection of the most important works on American discovery and exploration, this netted Huntington more than 50 early copies of Shakespeare's plays and poems and placed him immediately among the collectors in the field to be reckoned with. Of the Huntington's 30 Shakespeare folios, 10 come from Church. 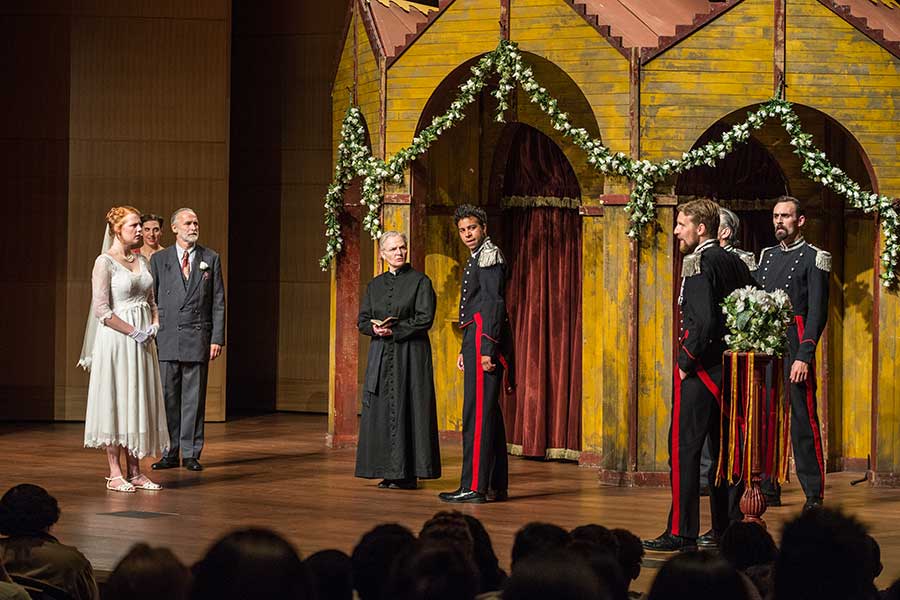 Actors from Shakespeare's Globe in London performed a touring production of Much Ado About Nothing in The Huntington's Rothenberg Hall on Nov. 9 and 10, 2015. Photograph by Jamie Pham.

Huntington's next big trawl of Shakespeare came in 1914 from the Duke of Devonshire. At its core was a collection of English drama started by John Philip Kemble, a London actor and theater manager at the turn of the 19th century. Kemble collected not just early printings of Shakespeare, but also later editions, including the now notorious Restoration adaptations, some of which were still being staged in Kemble's time. The star of this collection is one of the two surviving copies of the first edition of Hamlet (1603)—and the only one with the title page. (The British Library copy lacks the title but has the final leaf of text, which the Devonshire copy lacks.) This is the so-called bad quarto, containing a corrupt text differing widely from the one we are familiar with today. (For example, in the bad quarto, the first line of Hamlet's most famous soliloquy doesn't exactly soar from the second comma onward: "To be, or not to be, I there's the point.") While we would normally place both Kemble and Devonshire at the top of the pantheon of book collectors, both men compromised their achievements by the pernicious habit of cutting up their best books (including the 1603 Hamlet) and mounting the leaves individually in paper frames in misguided acts of piety. 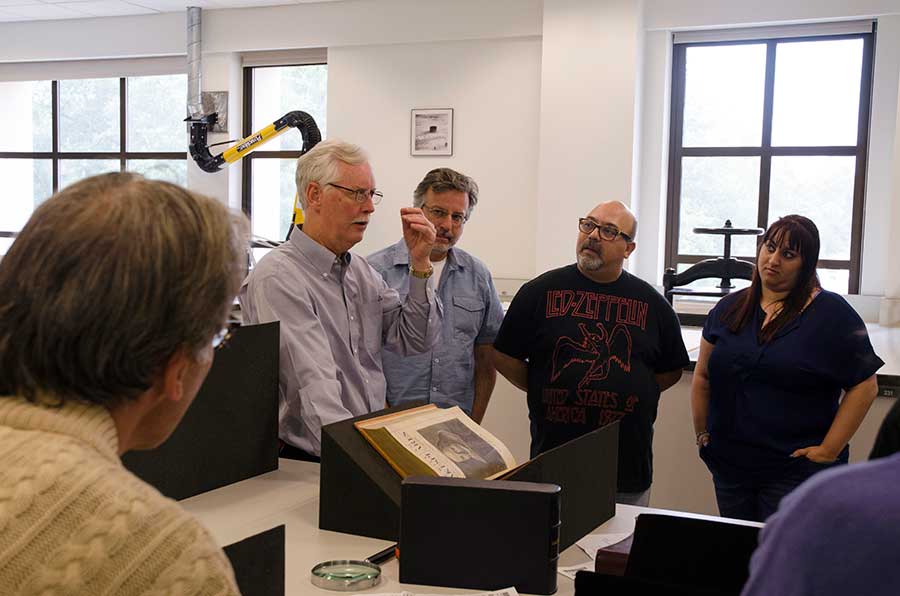 Stephen Tabor (far left), curator of early printed books at The Huntington, shows a Third Folio, 1663, of Shakespeare's collected plays to teachers attending the Shakespeare at The Huntington institute program in July 2015. The annual program brings theater professionals together with teachers, who learn innovative techniques for teaching Shakespeare through performance. Photograph by Lisa Blackburn.

By making further bulk purchases—including the fabulous Bridgewater library in 1917, which sits at the heart of the institution's early English holdings—and cherry-picking other famous collections, Huntington expanded his Shakespeare holdings while building on his other strengths. The most coveted items were the early quartos, the printings of single plays up to the rather arbitrary date of 1640. These survive today in an average of only 10 copies per edition, and the first printings are much rarer than that. Those published before Shakespeare's death in 1616 carry the most potent magic—the possibility that the author himself could have turned their pages (though there is no evidence that Shakespeare took the slightest interest in his own plays once they were printed). Henry Huntington set himself a goal to beat the British Library's holdings of early quartos, and while he fell a little short at 73 copies, his collection was thought at the time to be the second-best in the world. (Meanwhile, the single-minded Henry Clay Folger was secretly assembling a collection as large as the other two combined.) This figure ignores a shelf-full of works once thought to be by Shakespeare and earlier treatments by unknown authors of familiar plots like King Leir (as opposed to Shakespeare's King Lear) and The Taming of a Shrew (a different version of The Taming of the Shrew). It also leaves out the poems, among which is a tiny volume in its original limp vellum binding containing the 1599 editions of both Venus and Adonis and The Passionate Pilgrime. Then there are the folios—the hefty collections of the plays published in four editions between 1623 and 1685. Huntington bought four, ten, seven, and nine copies of the respective editions. The First Folio, published seven years after Shakespeare's death, contains 36 plays, 18 of them printed for the first time. This "authorized version," prepared by his friends and colleagues from "true originall copies," is the prime source of our knowledge of Shakespeare's texts. Another standout among The Huntington's folios is the Devonshire copy of the Second Folio (1632), with extensive revisions in a "contemporary" hand that turned out to be forgeries by the 19th-century Shakespeare scholar John Payne Collier. Though discredited, the notes remain an object of fascination for authorship conspiracy theorists and students of bibliographical rascality.

The death of Henry Huntington in 1927 marked the end of the library's purchases of early Shakespeare editions. Even if the institution he founded had been adequately endowed to compete in the marketplace, the supply was drying up. If any first-edition quartos from Shakespeare's lifetime remain in private hands today, potentially available for sale, only a few tight-lipped individuals know about them, and their appearance at auction will make headlines.

These early editions are now little-studied for their texts: we already know what they say. Instead, and increasingly, scholars want to find out where the individual copies have been: who bought them, how they used them, what they thought of them, and what books kept them company on the shelves of early readers. As with an archaeological dig, the goal is not to use the artifacts as they were intended but to study the evidence that clings to them and what it can tell us about the culture that produced them. Early Shakespeare editions at The Huntington remain in high demand by scholars conducting such research, though their circulation is tightly restricted because of conservation concerns. Scholars return to the original copies with different questions in each new generation. What would the Bard make of it?

Stephen Tabor is curator of early printed books at The Huntington.