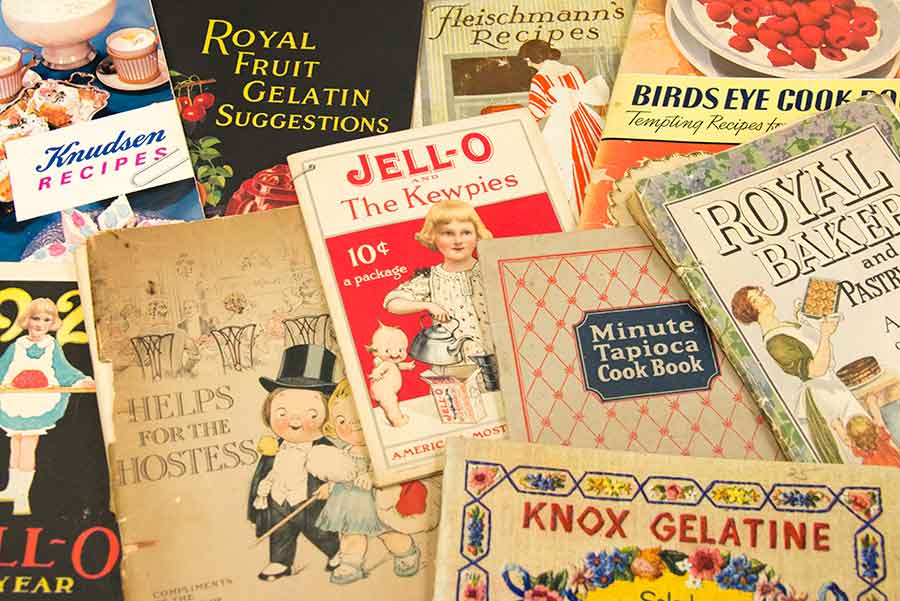 We hear the word “artisanal” all the time—attached to cheese, chocolate, coffee, even fast-food chain sandwiches—but what does it really mean? We use phrases like “farm-to-table” and “handcrafted food”—but how do we reclaim flavor? In his book Finding the Flavors We Lost: From Bread to Bourbon, How Artisans Reclaimed American Food, Patric Kuh, award-winning restaurant critic for Los Angeles Magazine, profiles major figures in the artisanal food movement, trailblazers who reclaimed a culinary heritage and rebelled against bland, mass-produced foods.

He also delves deeper than the modern menu, analyzing the larger issues of how population growth, speedier transportation, and even the notion of “food purity” led to the rise of supermarkets, giant food corporations, and eventually, a generation of artisans who abandoned convenience and quantity for traditional foods with exceptional taste. 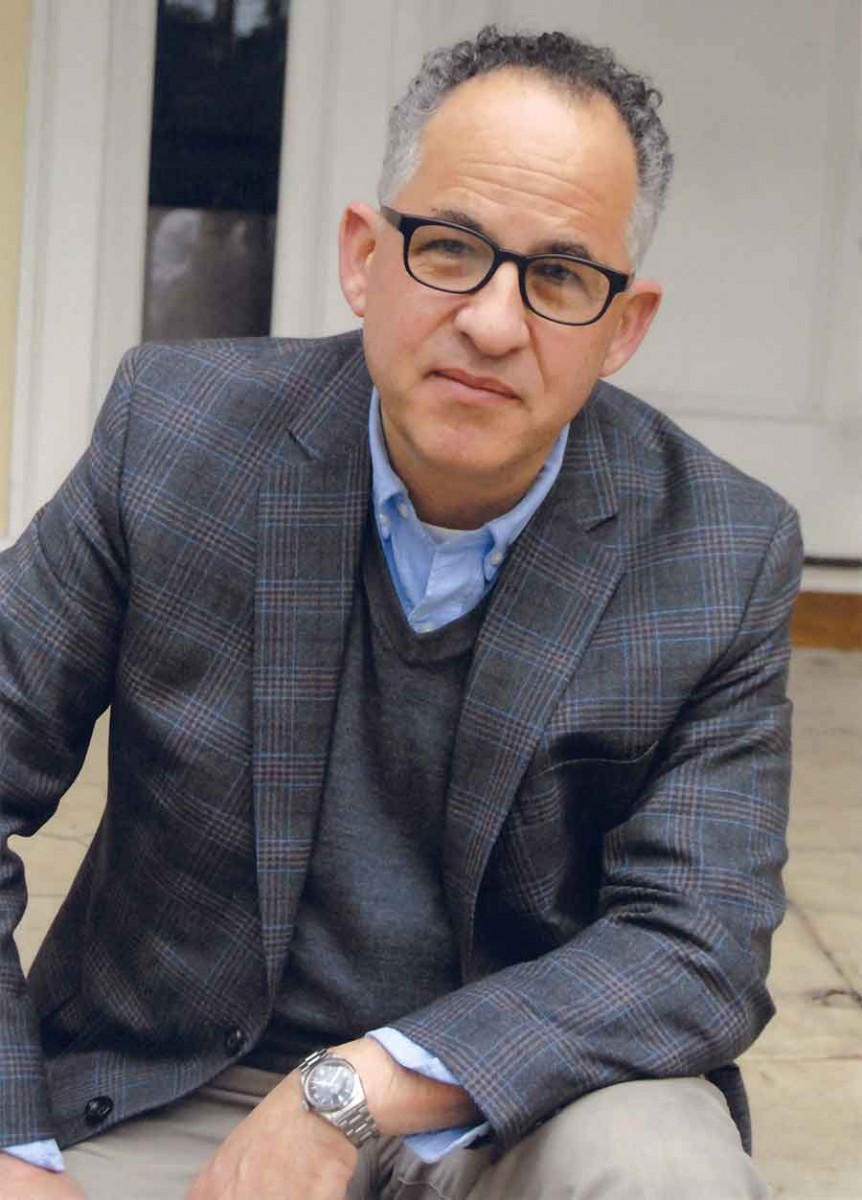 What follows is an excerpt from Kuh’s book, released in June, which relies on research he conducted at The Huntington using the Anne Cranston American Regional and Charitable Cookbook Collection. Such close scrutiny of a valuable archive provided some of the necessary ingredients for telling the story of the rise of the artisan.

Facts did not hinder New York’s Royal Baking Powder Company from warning to never allow alum powders into the home kitchen. “Remember this,” reads an ad from the turn of the 20th century, “and insist on getting ‘the Royal’ in cans.” This is a telling document not only because it marks the end of the era when the grocer might still measure out dry goods for individual customers but because it draws the manufacturer’s true agenda out from its cover of healthful concern. The vigilant woman should trust a brand more than bulk and if she wanted to do right by her family, she would reach for that brand’s sealed box. 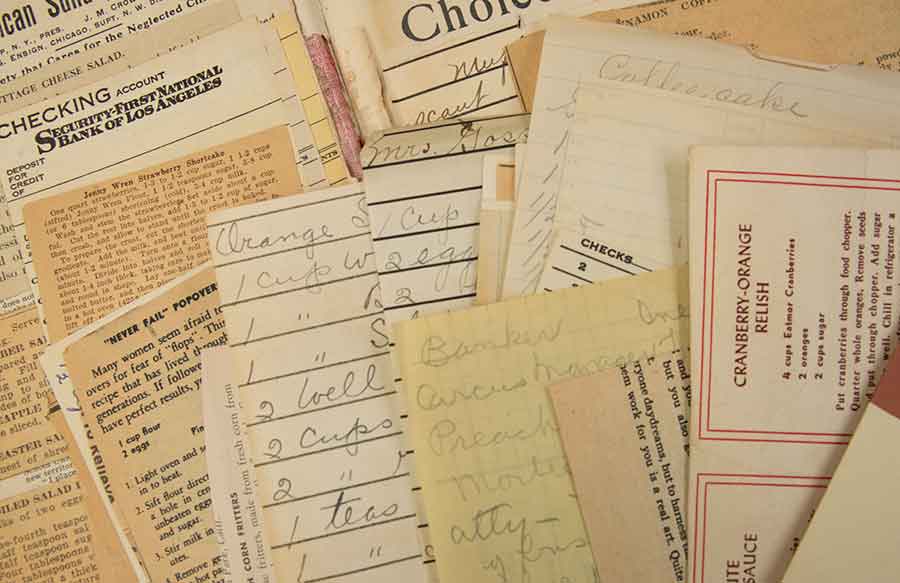 Close-up of manuscript and newspaper recipes mounted or laid in a charitable cookbook produced in Des Moines, Iowa, August 1903. Photograph by Kate Lain.

This was a significant shift. It began the transfer of authority that would take place from women armed with index cards, torn open envelopes, the back of bank deposit slips (the many places where a recipe handed down between friends is written down) into corporate entities armed with seals of approval and experts with colorful names like Marian Manners and Prudence Penny, each pushing industry-devised recipes on a remarkably recalcitrant public. Writing as late as 1971 about her Mississippi childhood, Eudora Welty described how foreign it would have been to reach for a ready mix when an occasion called for special baking. “I daresay any fine recipe used in Jackson could be attributed to a local lady, or her mother—Mrs. Cabell’s Pecans, Mrs. Wright’s Cocoons, Mrs. Lyell’s Lemon Desert. Recipes, in the first place, had to be imparted—there was something oracular in the transaction—and however often they were made after that by others, they kept their right names. I make Mrs. Mosal’s White Fruitcake every Christmas, having got it from my mother, who got it from Mrs. Mosal, and I often think to make a friend’s recipe is to celebrate her once more, and in that cheeriest, most aromatic of places to celebrate in, the home kitchen.” 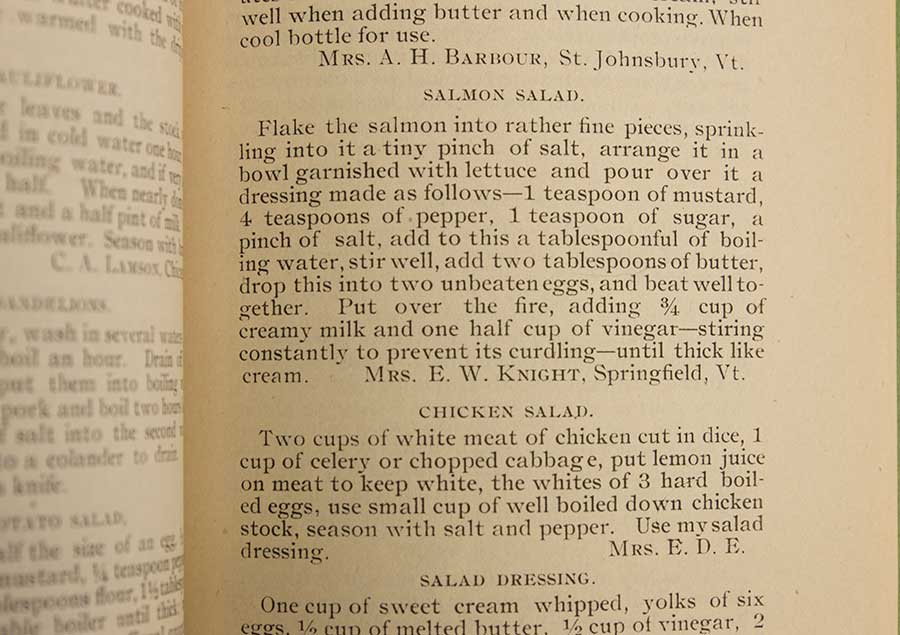 If there’s something heroic about that kind of resistance, it is tinged with the knowledge that, except in the most special circumstances, it is unsustainable. We might feel a fondness for grandmother’s giblet gravy in the china gravy boat brought to the table at Thanksgiving, but on a typical day we will reach for the bottle of ketchup rather than ever thinking of cooking it up ourselves from scratch. As Laura Shapiro writes in Perfection Salad: “This was the era that made American cooking American, transforming a nation of honest appetites into an obedient market for instant mashed potatoes.” 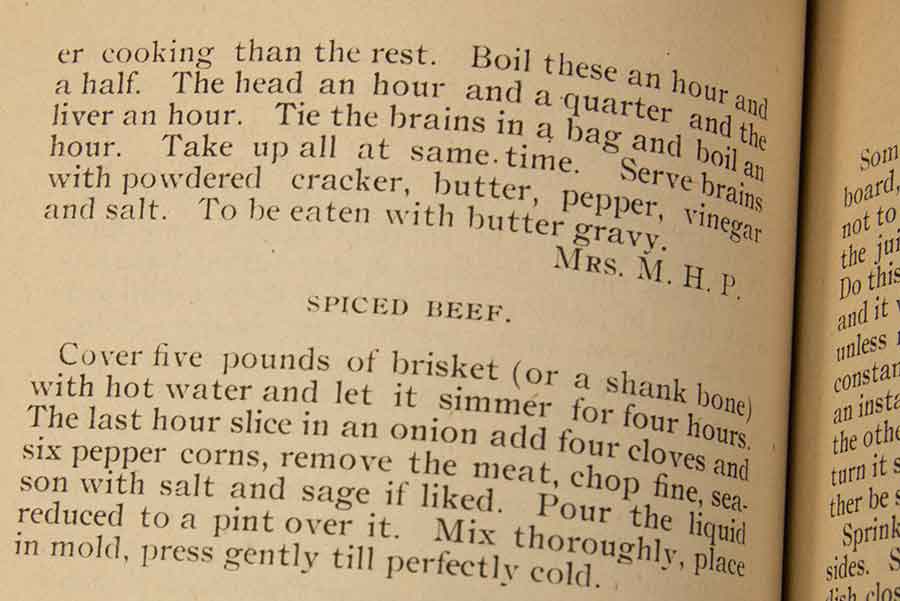 We can trace those changes most clearly in the receipt books that women often kept for private jottings and the charitable books that gathered recipes for good community causes into book form. The receipt books, the more intimate and personal archive, have cracked spines and discolored covers. They are a glimpse of the person who sat at the kitchen table: their pages are filled with penmanship exercises, snatches of Scripture, or the purl and stitch count of a knitting pattern. Sometimes even a snide aside: “Mrs. Edwards at luncheon, though uninvited.” Looking through them a century later, one sees documents that once caught a housewife’s curiosity. Here is a collection of 10 leaflets put out by Jell-O, explaining the molded salads the product could be used for; here are tinfoil wrappers of Fleischmann’s yeast, proofs of purchase that could be redeemed by mail for various parts of a silver dinner set. 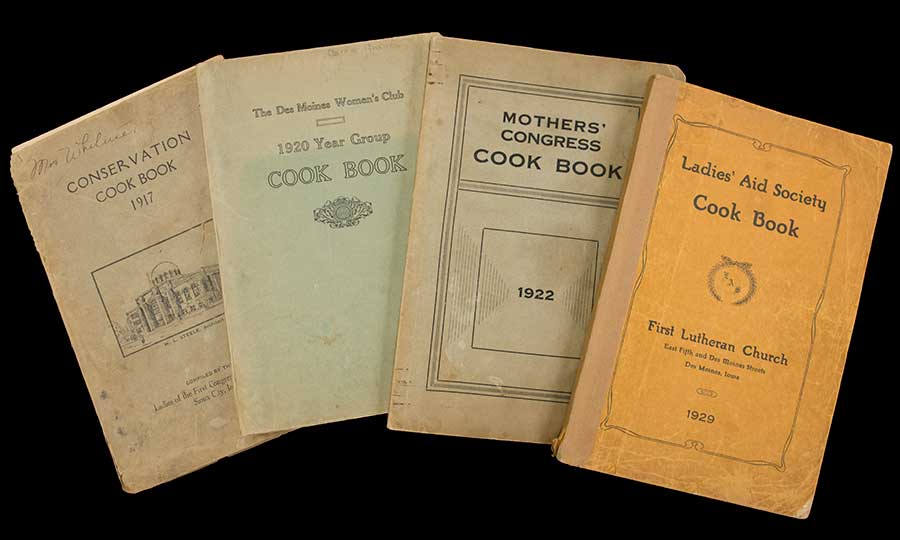 The charitable books represent something more solid. These were the recipes that a woman proudly put her name to and could expect to get some feedback on from neighbors. Usually the cause had something to do with a particular church. (My favorite dedication, published in 1911, was for the old Congregational Church at Buxton Lower Corner, Maine, “which the Dorcas Society has painted, decorated, shingled, carpeted, cushioned, kept in repair, and provided with new hymn and service books.”) But whether the cause was a new organ, a new roof, or the welfare of orphans, the broader story the books tell is always the same. In a remarkably short amount of time, from about 1890 to 1950, the food that Americans projected as the ideal in the public sphere undergoes a series of fundamental changes. Some are benign, perhaps even necessary. How long could we have gone with measurements like “a piece of baking soda the size of a pea”? But read enough of them and the trajectory of a loss of individuality, custom, and any sense of seasonality becomes all too clear. There’s a narrowing of choices. Table relishes that began with a bushel of tomatoes gave way to the branded ketchup tossed into a cocktail sauce. Recipes that jumped with vitality, such as the butter gravy of powdered crackers and simmered dandelion greens suggested by the Woman’s Christian Temperance Union of Vermont to garnish boiled veal around 1895, give way to “five-can casserole” by 1955. 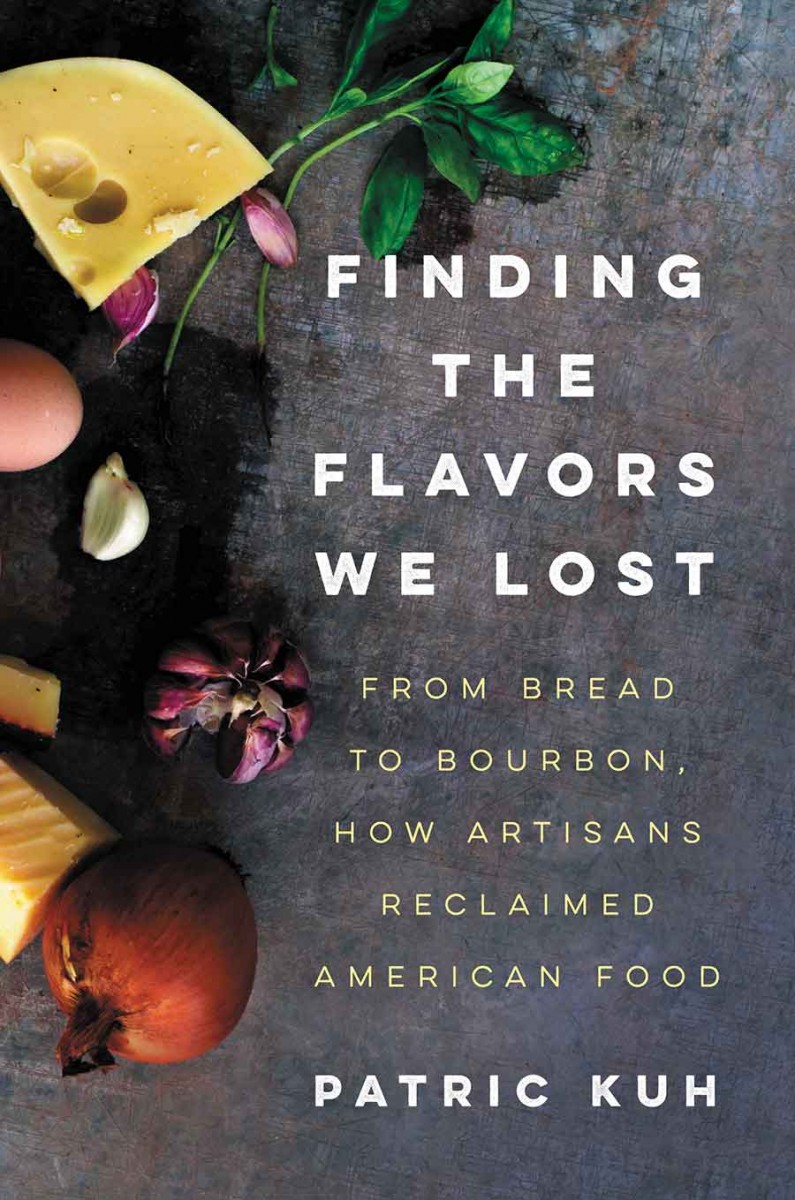 A Los Angeles Times reviewer has written that Patric Kuh’s book Finding the Flavors We Lost: From Bread to Bourbon, How Artisans Reclaimed American Food (Ecco, 2016) reads “like a short-story collection. Which is high praise, really, as his goal is to tell the stories of the handful of artisans he profiles, and in doing so, contextualize what these and other artisans mean to the current food scene.”

In whatever form they are collected, there is something poignant about regional recipes because we see the principles they stand for hanging on and then disappearing, seemingly forever. The packaged, wrapped, and sealed triumphed. Any vestiges of a more local tradition—say, the ricotta and mozzarella sold from buckets in the neighborhood latterias of Staten Island—might as well have been a concession allowed by the power that had dictated the terms of surrender. There were some flare-ups of resistance. Home gardening and pickling became little movements in the 1970s, but processed food was the nation’s daily fare, a vast realm of shelves and freezers stocked with sugary cereals, an entire world of crackers and and frozen dinners…. 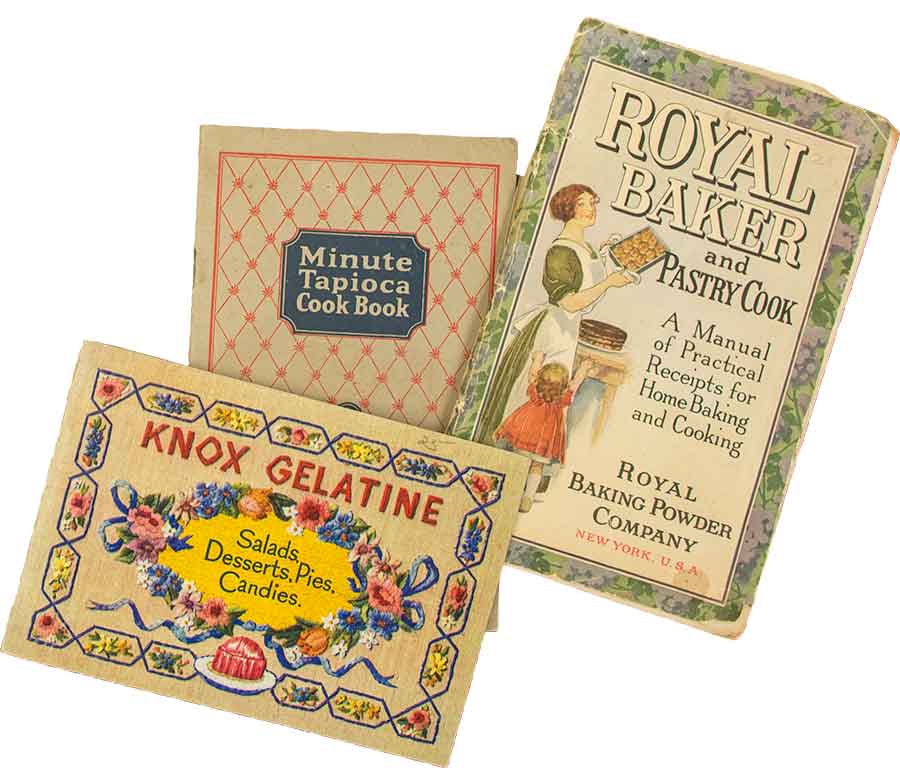 It’s not surprising that a generation of artisans chose to step away from this onslaught and make things with fewer, better ingredients and more care. The question is why—Was it flavor alone or because fashioning the best version of those things we consume gets at the soul of being human?

Patric Kuh is the award-winning restaurant critic for Los Angeles Magazine and a reader at The Huntington, where he had a short-term fellowship in 2010–11.