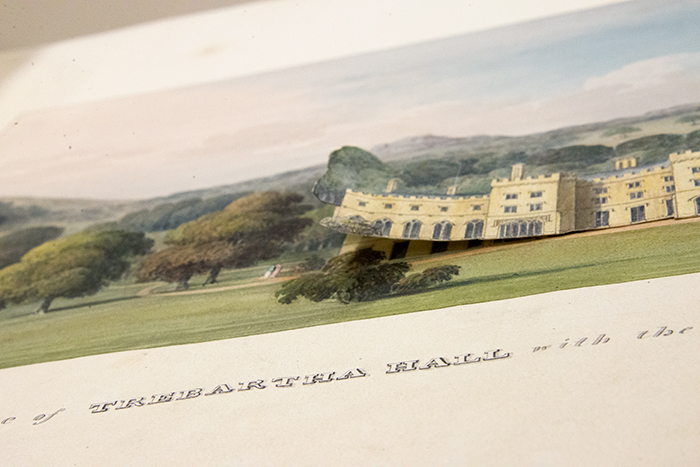 An illustration from landscape architect Lewis Kennedy’s prospectus album, with an overlay showing before and after views. Notitiae of the alterations proposed at Trebartha Hall the seat of F. Hearle Rodd Esqre., Cornwall, Jan. 2, 1815. The Huntington Library, Art Collections, and Botanical Gardens. Photo by Kate Lain.

Recently, the director and some of the cast from a current production of Tom Stoppard’s play Arcadia stopped by The Huntington to view several of the real-world objects portrayed in the performance by A Noise Within Theatre Company. Stoppard set his play in Derbyshire, with the plot jumping back and forth between the present day and early 19th-century England—a period well represented in The Huntington’s library collections.

The play takes place in Sidley Park, a fictional estate belonging to the Coverly family, and, as its title suggests, reflects on an idealized life in the countryside. The story includes modern-day scholars researching the estate and their musings about the previous residents. A key object in the plot is a prop made to look like a landscape designer’s prospectus album, showing watercolor renderings of the estate’s grounds with overlays to provide before and after views. 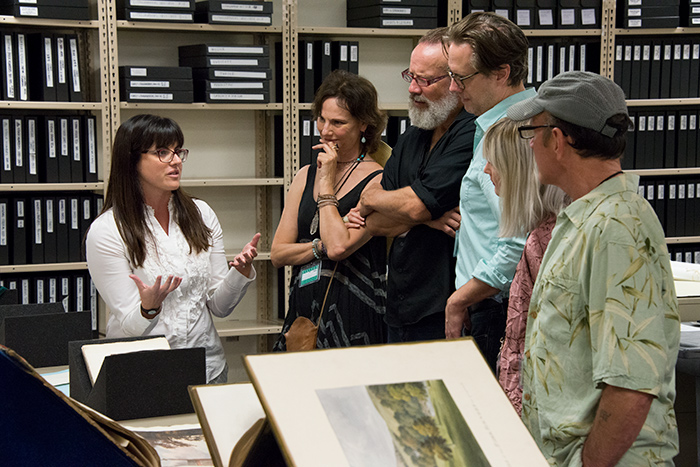 When several Huntington curators and other staff members saw the play, they noticed the prop and remembered a similar object in the collections. That led to a search for the real example of such an album, along with other items from the period. As the group of objects grew, curators decided it was time to share their bounty with the theater troupe.

The Huntington’s curator of British historical manuscripts, Vanessa Wilkie, showed the actors and director what she called “the ultimate pitch,” a silk-lined landscape designer’s album portraying the grounds of Trebartha Hall, a grand manor house in the Cornwall countryside. The album, by English landscape architect Lewis Kennedy (1789–1877), proposed a redesign of the gardens illustrated by eight large watercolor views, one with an overlay, and five pen-and-wash vignettes. It is similar to the more famous “Red Books” of Humphry Repton, the 18th-century designer to the rich and famous. 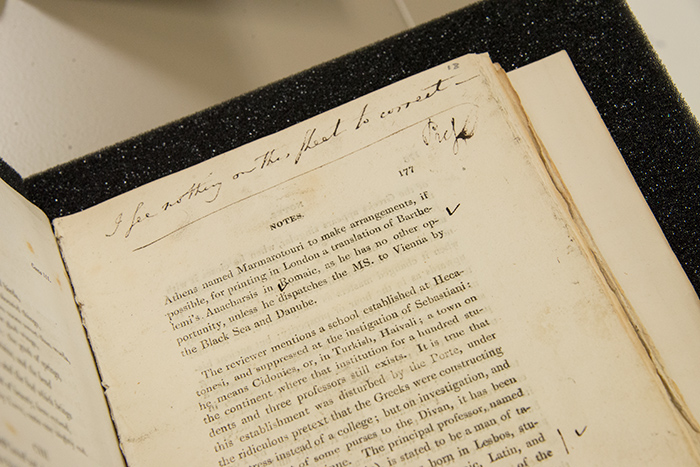 Lord Byron’s handwriting in a copy of the seventh edition of his narrative poem Childe Harold’s Pilgrimmage, 1814. The Huntington Library, Art Collections, and Botanical Gardens. Photo by Kate Lain.

The actors and director also examined a seventh edition of Childe Harold’s Pilgrimmage (1812), a narrative poem by Romantic poet and celebrity Lord Byron (1788–1824). Byron is a principal character in the play’s progression, although he doesn’t actually appear. Byron’s poem was wildly popular in its day, cementing Byron’s poetic reputation. Stephen Tabor, curator of early printed books, explained that The Huntington’s copy, published in 1814, bears corrections in Byron’s own hand and is a must-see for scholars editing his works.

A third object relates to the character of Thomasina, the teenage Coverly daughter, who is quite precocious and shows signs of being a mathematical genius. Curators brought out a 19th-century geometry and trigonometry volume containing a beautiful hand-colored map. It was just the type of work Thomasina might have studied under the guidance of her tutor, Septimus Hodge. 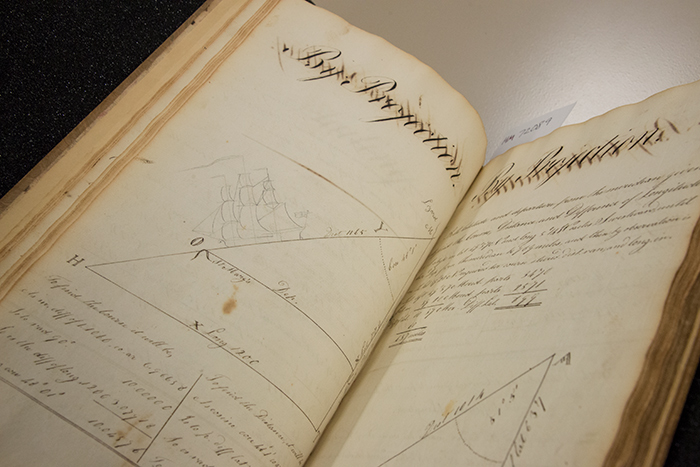 Mathematics manuscript (1820–1832) by Daniel Hallett, in which geometry and trigonometry are used to calculate and solve problems related to sailing directions. The Huntington Library, Art Collections, and Botanical Gardens. Photo by Kate Lain.

Literary manuscripts curator Sara S. “Sue” Hodson produced the greatest stir among the thespians when she displayed an early typed draft of the play Arcadia itself. Stoppard had given the manuscript to The Huntington soon after Hodson visited him in London in the early 1990s.

“Stoppard was writing Arcadia at the time. There he was, chain-smoking like mad, with a huge drafting board, like an artist would have, in front of a big bay window overlooking the city,” Hodson told her enthralled listeners. “I had brought some books on The Huntington with me, and we really bonded. One thing that struck him was the fact that I was living in Arcadia, California, at the time!” 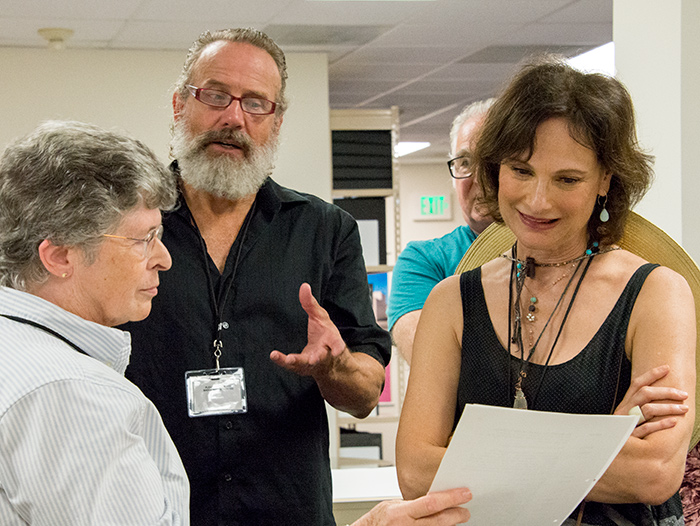 The margins of the draft are filled with Stoppard’s notes, and some pages reveal crossed-out text that never made it into the stage directions. Electrified by the thought that they could uncover unknown clues into the characters they played, the actors called out their scenes to Hodson, who turned the pages to see what the typescript revealed. Actor Susan Angelo, who plays Hannah Jarvis—a famous author researching the hermit who lived on the Sidley Park grounds in the 19th century—discovered that her character was originally written as a divorcée. She had always assumed that Hannah had never been married. She left wondering how this tidbit of insight might inform her next performance.

Arcadia continues at A Noise Within Theatre Company through November 20 (click here for tickets). You can read A Noise Within's account of their visit to The Huntington on their blog.