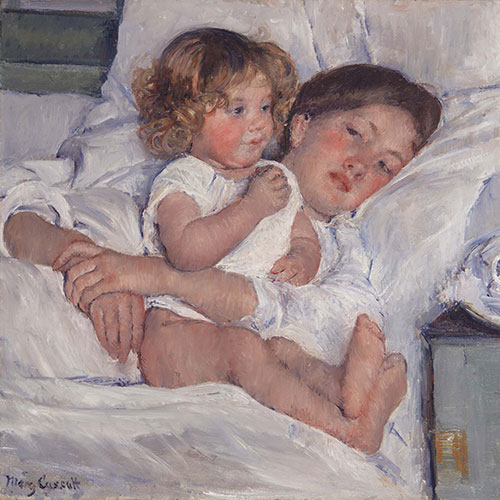 Mary Cassatt was one of the first American women to achieve international recognition as an artist. Born in Allegheny City, Pennsylvania, she spent most of her life in France, where she became close friends with the French Impressionists. Impressionists used small brushstrokes to apply unmixed colors in order to capture the immediate visual impression of a scene. Cassatt was the only American to exhibit with the core group of French Impressionists, including Edgar Degas, Claude Monet, Pierre-Auguste Renoir, and Camille Pissaro.

In the 1880s Cassatt began depicting the subject that absorbed her for the rest of her career: the mother and child pair. She often dealt with the tension between a mother's focused attention on a child and that child's desire to explore the world. In Breakfast in Bed, the mother gazes at the child wrapped in her arms while the child looks out into the room. By focusing closely on the figures, Cassatt draws the viewer into the intimate scene.